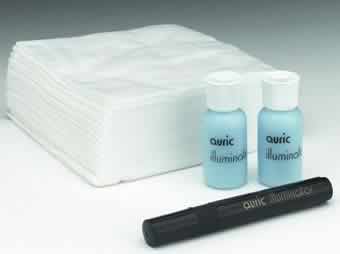 You may have read other rave reviews about the Auric Illuminator somewhere on the Internet (Stereotimes, Soundstage etc.). It is an "optical discs" treatment fluid (+ a pen) which is claimed to improve the readability of all discs, CD's included, of course.
The Auric Illuminator is a set that includes 2 ounces of light blue gel + 1 black marker pen + a pack of 20 polishing cloths. The pen seems just a standard marker at first sight, but it smells exactly like the Auric fluid so it has to have something into it, not just plain black ink. The whole set should be enough to treat 200-400 discs.

I think I've tested almost every similar item made on Earth (read the previous reviews here on TNT-Audio): the Audioquest LaserGuide, the Shinpy Claro, the Nordost 3 Eco plus several home-made DIY recipe hence I believe I'm pretty aware of the positive effects these fluids can have on CD's.
I was curious to put this "new kid on the block" under test.
First of all, being our mag strictly restricted to Audio only, I haven't tested the Auric Illuminator on DVD's and LaserDiscs. I've tried the fluid alone, without the pen and viceversa. Finally I've tested the whole set (fluid + pen), on Audio CD's only.

How to use the Auric Illuminator

Since the Auric is a fluid meant to improve the optical characteristics of the discs and to reduce surface electrical charges, you need to put it on both sides of the disc.
Put 2-3 drops on the label side, then spread the gel with the cloth, finally wipe dry with the clean side of the cloth. Repeat the procedure on the other side. Then mark the inner and outer edges of the disc with the marker pen and you're done. You can even use the marker pen before the fluid (recommended by manufacturer).
There shouldn't be traces of the fluid on the disc that, after the procedure, should result completely dry and shiny. Do not exceed the recommended quantity.
Now the Auric comes with a template to make the use of the pen way easier.

As previously stated, I've tested almost ANY CD treatment device made on Earth and always have found some positive effect. The Auric Illuminator treatment makes no exception to this rule but, wait, there's more.
This blue gel is the only one I've tested that is able to improve the sound of the disc over the entire audio spectrum.
Yes, Virginia, while the other fluids were able to make the CD sound more airy, detailed, with a better soundstage and focus but did almost anything to the bass range, the Auric Illiminator produced audible differences (I mean, improvements) even in the bass zone. I was shocked, to say the least, because I was phsychologically ready to experience the already known effect (brighter, sharper sound) and nothing more than that.
With the Auric the bass range becomes tighter and firmer, even deeper (!!!) and it is very hard to believe this difference has been made by a CD treatment fluid alone. The worse the recording, the more audible the effect.
After this revelation, I started to treat the worst discs I had at home and, no matter how bad was the recording, the Auric was able to make it sound cleaner, with less distortion in the highs and more "body" in the bass.
Pretty astonishing was the soundstage too, larger and deeper, with better focused instruments and singers.

To be honest, I have to admit the tests have lasted for several months because I wanted to be sure of the effects, so I asked some friends to test the fluid, avoiding to let them know my findings. And yes, they precisely confirmed my opinions.
I tested the pen and the fluid separately and I must say the greater improvement is due to the fluid alone. The pen, more or less, works just like the old -well known- tweak of the ink marker. The polishing cloths are 100% synthetic and incredibly soft, so to avoid any unwanted scratch of the disc surface.

To summarize briefly, this is, so far, the best CD treatment I've ever tested, period.

The whole set costs 39 $ or so and this means 0.1 $ per disc. Worth a try. Considering the effect, I have really nothing to complain about, especially if I think at some more expensive fluid I've tested (the Claro, for example) which hadn't the same positive impact on the sound.

For those who can't believe a fluid can have such an impact on the sound I can only suggest to TRY. At 39 $, the Auric is a bargain even if considered just a mere CD cleaning fluid (which it is not). If you don't get the claimed results, you can always use it as a cleaning fluid.
Of course, usual disclaimers apply here: the results were the same both on my systems (pretty hi-end stuff) and even on some friends' systems (mid-to-budget class). I can't guarantee you'll hear the same improvements on your system. This is just what I've experienced, simply put & reported.

No other CD treatment I've tested comes close to the Auric Illuminator.