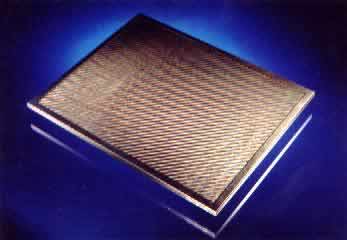 There's a school of thought that believes that there has been little fundamental progress in hi-fi for the last 40 years. Listen to a system using something like a Gerrard 301/SME/Ortofon SPU through Quad valves/electrostatics and you can see the point. But in that time there are a few areas of design which have become better understood and led to an improvement such as cables, power supply regulation and equipment supports. Here we have a new equipment support that I thought would be worth looking at. I'll review it primarily as a turntable support as that is the most sensitive piece of equipment.

The theories behind equipment supports all aim to do something about the vibrations that effect equipment, in this case turntables. These vibrations can be external, the most damaging being those made by the loudspeakers, as this vibration is music dependent and in extreme cases can act as feedback where a cartridge picks up a vibration, amplifies it then picks up the amplified signal and so on... These vibrations can be airborn (sound) or be caused by the thing the turntable is sitting on vibrating along with the music. Other vibrations may be caused by the equipment itself, motors and transformers being the prime suspects. So the support needs to do something about the vibrations of the equipment itself, either self produced or picked up from the air, and isolate the turntable from vibrations coming up from whatever is beneath it.

I think there are roughtly four general theories on what works in this situation - please excuse the usual sweeping generalisations... Type 1 (my catagorization) is high mass. A great slab of concrete or marble or whatever. So heavy that the component sits immobile (in theory), all vibrations just being unable to move that slab and therefore just get lost. It's a nice theory, but it hardly allows the turntable to sink it's vibrations. Imagine a piece of spring steel sticking up from a block of granite. Twang the steel and it'll vibrate and probably 'sing' for a while. Do the same with block of rubber and you'll get a thud as the vibration is absorbed and the steel stops quickly. This is the Type 2, absorbing the vibration with a very compliant structure. Supports with airbags do this as well as various sorbothane blobs. Again nice theory but suspended turntables and many CD players already have tuned suspensions that won't take kindly to being 'bounced' at yet another frequency. Type 3 supports are filled with sand or ball bearings or whatever that is supposed to vibrate together and disperse energy as heat rather than passing it on. Lastly we have type 4 which in the tradition of Linn's IKEA coffee table aim to be very stiff, holding the turntable still, but also very light so that there is little mass to store energy - sort of the opposite of the high mass strategy!

Confused? I'm not surprised - me too, as with cables there's a theory for every day of the week, every manufacturer pushing their own personal one - trouble is, like cables, they work, or at least make a difference!

The CETech is perhaps the ultimate Type 4 support. It's very simple, a slab of carbon fibre/aluminium-honeycomb sandwich with three plastic cone feet and a bit of wood trim round the edge. Though simple this is seriously hi-tech. The sandwich is much like you find forming the monocoque of a F1 racing car. It's expensive stuff and gives one of the highest weight to stiffness ratio's known to man. And to be honest that's it. It's well finished and looks sexy with the carbon fibre weave visible, the wood pretty and understated.

One snag here. My Orbe has metal cones as feet. They're not sharp so they didn't damage the resin coating the carbon fibre but did slide around alarmingly! I solved this with three (one for each foot) 'leeches'. These are little self-adhesive neoprene circles designed to be instant patches for bike tyres. They're rubbish for this purpose but stuck on the carbon fibre they gave something for the Orbe's feet to grip whilst allowing the 'point' to penetrate down to the surface.

Oh and another snag. The manufacturer recommends that with an uneven load two of the three feet should be under that end. On the Orbe this meant the two feet were under the back of the tt supporting it and the heavy motor assembly. Oops! This is the reverse of the feet on the Orbe itself which has two of it's feet at the front - thus the weight of the front was split either side of the one support foot bending the carbon fibre. Actually the immense stiffness meant that I didn't spot this at all until I found it impossible to tune the TT suspension to give a vertical bounce. The carbon fibre flexed just enough to throw it out - took me four hours to figure this out! Turning the support through 180 degrees so that each turntable foot had a support underneath it solved the problem.

Here at TNT we are all DIY fans to some extent or other and it's a brave manufacturer who submits either cables or supports for review as there are so many projects on the site. In my case I use a mix of type 1 and 2 supports in the shape of a slab of 3cm thick marble (rejected grave stone) on Focalpods (sort of sorbothane blobs) - total cost 20 pounds. A commercial support like this would be well into three figures. Replacing it with the CETech produced a change. First there was a tonal shift, the sound became a little lighter and faster on it's feet. The trade off was a slight loss of ultimate bass weight though speed was better. Everything seemed just that little bit clearer and more open though the TT did become a little more prone to the dreaded slammed door (not that I ever let the kids slam the door). For example the 'Swamp Thing' mix of Madonna's 'Ray of Light' became much more listenable, the bass loosing boom! and gaining speed...). I'm not going to say it was anything earth shattering but I was surprised, the overall result being an upgrade that if I'd just spend the dough on a 200 pound interconnect (or soldered one up:-)...) I'd have thought it well worthwhile.

A Caveat here. The Orbe is a very well suspended turntable. Others, solid plinth types etc may benefit much more. Likewise some turntables (my old LP12 for example) sound distinctly muddy and leaden on high mass supports and really need a lightweight to shine.

Nicely finished and with a light open sound - in my case at least, these things being very system dependent. As for DIY versions, well you could hunt down the carbon fibre but it ain't cheap so you're not going to save a fortune as with some other supports. Lightweight supports can be made from other stuff but nothing is going to be as light/stiff as the CETech. If your equipment likes a lightweight support the CETech is hard to beat. Personally I'm happy with it and to my surprise I'll miss it when I have go back to my old grave stone...

Try before you buy?

I'm going to bang on about this because I feel this is essential for anything sold over the net. Thankfully CETech offer a 30 day return policy - perfect. Supports are system dependent and so this means you can try it and see if it works - a no lose situation, others take note...