A “magic carpet” for your components 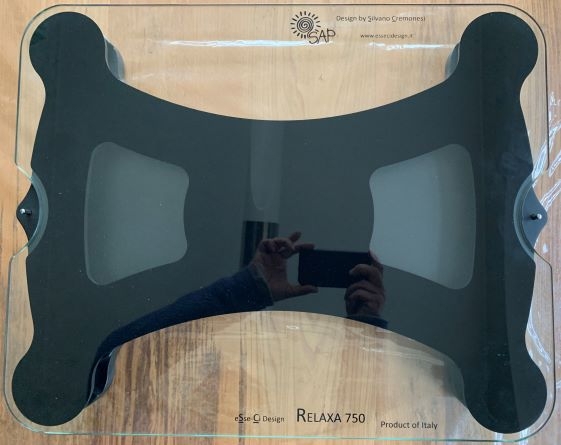 Just think back about all the time you've spent testing various feet, spikes, graphite blocks and several other weird and exotic devices as a support for your beloved components. I think I may have made tens of tests in the last few years, so when a couple of months ago I was offered the chance to test a new platform that was simply floating on air, I must admit that I have moved this test forward since I was quite curious to see how it works. After just a few days of waiting a quite bulky and heavy box arrived; inside there was the platform divided into two parts, some felt adhesive disks to glue under the lower part and a small round level to help install the component. The two parts are directly installed one above the other, just insert the two small pillars on the lower half into the holes of the upper part and it is ready for use.

How it is made?

The Relaxa 750 is the top of the range of the Relaxa series with a maximum load of 50 Kg. It is the last evolution of a patent filed in 1999 that has been used in several different products. Please refer to our review of the first series in 2001.

Aesthetically it is made from two symmetrical black structures with the upper one carrying a rectangular piece of tempered glass. The corners are rounded and in the middle of the short sides of the glass, there are two round cutouts to allow the glass not to interfere with the protruding pillars of the lower part. Under the four corners, and in the middle, there are a total of eight magnets each pair repelling each other allowing the upper part to float above the lower part. If left completely free to move, the upper part will drift aside collapsing so in order to avoid this there are the two small pillars in the low part that have the task to keep the two parts aligned and centered. The magnets on the four corners are assembled on screws to allow fine leveling of the upper part. You can see in the picture below a close look at one of the magnets. 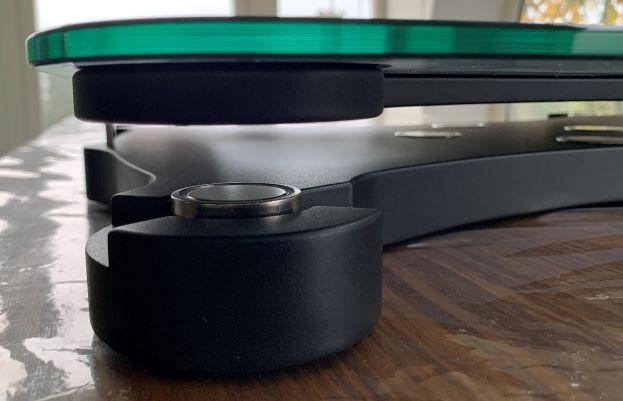 The magnets are encased in a metal cover that blocks the magnetic field to propagating in the opposing direction. They are very powerful magnets and without proper screening, they could certainly generate some disturbances or interference. The finish of the parts is excellent; they look elegant and complement the most exotic component. Possibly silk screenings on the glass are a bit big and kitsch, but once you have installed your component you practically don't see them anymore.

As I have already said, the installation is one of the easiest I have made. Definitely, it is big (512mm wide x 460mm deep) so first check if you have, in your shelf, enough room considering also that it weighs almost 10 Kg so a bit of hard work is necessary to position it. Take for granted that, before installing, you will play with it because to see this large glass plate floating and ballooning without visible constraints is fascinating.

I had four main questions about the Relaxa 750:

To cut a long story short, let's go straight to the first question: does it work? YES! All the components I have installed above the Relaxa 750 have shown a positive effect in a variable degree, depending on the nature of the component. The improvement that can be noticed is a general cleaning and focusing of music. To put it simply, it is the difference between looking through standard glass and extra clear glass.. With both, you can see outside a window, but the extra clear glass allows you to see those small details that were hidden by the small distortions of standard glass. Different from the majority of feet that change the sound of your system, the Relaxa 750 doesn't add or take anything from the balance of the reproduction and this is very positive for me. Every component sounds as close as possible to how the designer had envisioned it and this allows us to see much better the qualities of our components. It won't make your equipment sound better or different, just the best they can. Interestingly, along with all tests, I never had any problem of disturbances from the system so the screening of the magnets is definitely well done.

Coming to the second question, I tested a turntable, a tube phono stage, a solid-state phono stage, a CD player, and a DAC. The best results I have found are with the turntable and the tube stage, a bit less on the CD player and the solid-state stage, and quite less on the DAC. The improvement seems to be greater on the equipment that are very sensitive to external vibrations or wit a high level of microphonicity (turntables, CD players, tube amplifiers) or where the level of signals is very low like in phono stages. Digital processing seems to be less improved.

The best way to set your components on the Relaxa is using a rigid connection: in most cases, you can't remove the standard feet and simply set your equipment since the bottom has screws or alike protruding so I used some small wood bars. Standard feet are OK if not too elastic; the worst is either very soft feet like Isonodes or spikes. Spikes' effect overlaps Relaxa isolation performance so you will be wasting your money and with Isonodes it is like having two springs in series: everything gets blurred and confused. I have loaded it with up to 35 Kg without problems; you see just the glass lowering by some millimeters, but the overall performance doesn't change. The magnets on the four corners allow for fine leveling, but if you need to compensate for some large differences you first need to level your equipment and then use the magnets to compensate for some uneven weight differences.

The last question was on value and benefits. It is indisputable that 1500€ for a passive component is plenty of money and that, at first glance, the cost of the component parts seems to be much lower. In truth, 16 magnets of this size and characteristics aren't cheap and you must add the two black bases and the tempered and cut glass. Finally, the craftmanship must be of the highest level to have the magnets perfectly facing each other. In short, they aren't cheap to produce.

The cost/benefit analysis, in my view, depends very much on your system: I do see them working very well in a mature system, with each component carefully chosen and considered and where the most obvious improvements have been already explored. If this is the situation you could have some very pleasant surprises and perhaps save the n-th replacement of a component. Vice-versa, in a new system and in constant evolution the benefits could be lost.

In absolute terms, the Relaxa 750 is, for me, the best solution to support a component I have met. It is even better than my G-Flex which is quite a lot to say. It is heavy and bulky, but the performance is excellent so, if it is within your budget, it is worth giving it a try.

My warmest thanks to eSseCi team for having supplied me the tested platform.