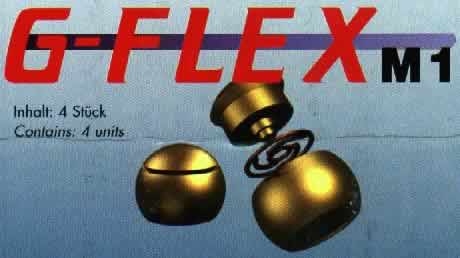 What are these golden eggs? More or less this has been my wife's first comment as soon as I unveiled the content of a small black box containing four G-Flex dampers.
Let's admit it, she wasn't all that wrong: the G-Flex box arrived at home during the Easter holidays (when our house is crowded with chocolate eggs...) and their appearance is just that: four mid-sized golden eggs...
Also, as any regular Easter egg the G-Flex's contain a gift inside: it is the flat metallic spring which is the hidden secret for their damping action.
Each G-Flex comes with a set of 5 identical flat springs to accommodate different weights. Five identical springs to be used as the table below should clearly explain (please remember that you need to use 4 G-Flex under each HiFi component):

Installation is eaaaasy: just put 4 G-Flex's under the HiFi component or loudspeaker you want to treat and "dampen" and you're done! The flat spring will isolate the unit both on the vertical and the horizontal plane.
The G-Flex feet have been highly appraised by many HiFi reviews/reviewers and they have been awarded with the Diapason d'Or up there in France.
They are made in Austria, if memory serves me well, by a Company that designs and manufactures devices for suspended bridges.
The device is patented (Pat. nr. 697) and claims to have a maximal efficiency due to computer-optimized force-displacement response, so it should work fine with HiFi components, loudspeakers and any other device which suffers from vibrations.

Testing the G-Flex devices has been a long and tiring task: try to put and take away (multiple times) 4 G-Flex's from under a 50 kgs (100 lbs) power amplifier and you will feel like after a whole afternoon spent lifting weights in a gym... :-)
I've tried them almost everywhere: CD players, preamps, power amps, loudspeakers and...listen, listen! even under a scanner (!!!).
I wasn't shocked by the results: anyone who swears to have seen the Light after trying similar devices is implicitly confessing his poor experience on vibration damping devices like these.
Let me start with the effects I've heard when testing the dampers under various electronics (CD players, preamps, DACs and power amps). These G-Flex's have a remarkable cleaning effect and the sound comes out easily and naturally, like the amount of musical informations was increased.
The extension of the bass range increases while becoming cleaner and tighter: more or less it is the same effect you get when hooking up very high quality cables...nothing really changes dramatically except the overall "listening pleasure": a sum of parameters that can hardly be analyzed and detected precisely.
In the dynamics department one can hear a distinct improved kick and punch so attacks appear crisper while decays sound naturally "relaxed", a little bit longer, I dare to say.
The contours of the virtual "images" into the soundstage become more precise while the whole 3D stage widens and earns some extra depth.
Summarizing, I'd say that with electronics (CD players, preamps, integrateds, amps) the effect produced by the G-Flex feet is always positive and clearly audible.

With loudspeakers things change a bit...for worse, especially with heavy and large floorstanders. Though the "cleaning" effect is still there for everyone to hear, there is also an aubible countereffect on dynamics and imaging: with the G-Flex's the loudspeaker tends to oscillate and this affects the dynamic capabilities of the loudspeaker itself, because of the Newtonian law of action/reaction (push/pull).
The same happens when the musical program is rich of very low frequencies since the amount of energy delivered by the woofers is somehow "damped" by the oscillation/rocking of the cabinet.
Now you can easily guess what happens to the 3D image: are you able to take a sharp camera picture when your hands are trembling? I can't. And so a large floorstander with the G-Flex's under it: the cabinet rocks back and forth (and sometimes laterally...I'm talking of micrometric and invisible movements here!) and hence the image loses its focus and precision. As a result the contours of the players and singers are "blurred" and everything becomes quite unnatural.
With small bookshelf loudspeakers things work better, though.
As usual there's nothing as a free meal: you earn something, you lose something. While the G-Flex's can "clean" the mids and the highs of any loudspeaker they can worsen the dynamic and soundstaging performance: the taller the loudspeaker the uglier the effect.

As announced, I've tried these devices even under my Umax scanner. Well, it is a very vibrating and noisy unit indeed and putting 4 G-Flex's under it almost cured definitely the problem: scanning is now quieter and smoother! Kudos to the G-Flex's!
And no, I can't swear the scanning quality has increased as this is affected by higher order troubles...

They're a must under any high-quality HiFi component but their price makes them a pure nonsense under low-priced CD players and amplifiers. They DO still work but then it should be better to spend the equivalent amount of money on better components.
As we've seen their effect under loudspeakers should be evaluated carefully before purchase as the results may vary wildly depending on size, shape and weight of the cabinet.
Always use 4 of them, do not try to save some money using just 3 G-Flex's!

Nicely and solidly built these G-Flex's are a pleasure for the ears and the eyes. Their WAF is pretty high....but they're pretty expensive too. Yeah I know the research behind, the low-tolerance manufacturing process and the like but, after all, a G-Flex is composed by two CNC-machined brass half-spheres (well, more or less) plus a metallic flat spring. I hope the manufacturers will be able to cut down costs.
The G-Flex dampers tend to be pretty "slippery", especially when coupled with low-weight electronics. For example a light DAC or preamp connected via fat interconnects and AC cords always tends to slip drowned down by the cables. I may suggest some blue-tac or bi-adhesive tape to cure the problem. It would not be a bad idea to offer some blue-tac with the box of 4 G-Flex's, it costs nothing and it works.

In the "sonic" department I have few complaints to make when the G-Flex's are used under electronics but I can't honestly suggest these devices under heavy and tall floorstanders...unless you listen at very moderate levels.
To make things even worse there's the fact that you need 8 G-Flex dampers to treat your loudspeakers (4 for each one) and hence the cost becomes even a major concern here...
Anyway, don't take anything for granted: try with your own loudspeakers and judge by yourself...

The G-Flex dampers won't paint your walls in shoking-pink, they won't make your blonde neighbourhood fall in love with you (ever considered lowering the volume of your HiFi and shaving more often? :-) ), they won't turn your low-priced HiFi into a costly hi-end set-up....but they DO work and in my opinion, when used under CD-players and preamps, they can make a pretty remarkable difference. If they were a little bit cheaper...

A warm Merci! to Yair Wahal, deus-ex-machina at Miroir de la Musique, Italian distributor of the G-flex dampers, for having sent us these golden eggs for reviewing.