tuning your analogue rig in... 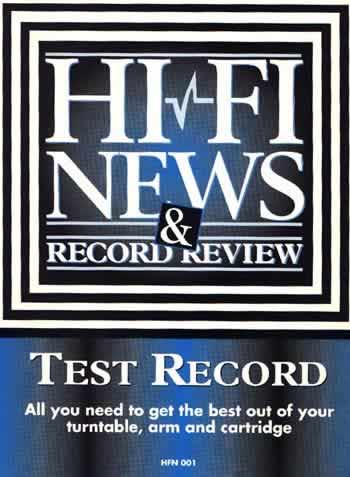 This no ordinary record review. Here we are not concerned with music, but with a record specifically designed to help you set up your cartridge/arm so that when you do come to play music you will get the best out of them.

This is a fairly new recording (1996) made for Hi-Fi News in conjunction with Len Gregory - "The Cartridge Man" of modified AKG and Grado fame. It contains no music, just a series of squeaks and beeps and hums designed to confirm you as a real hi-fi addict...

I'll go through the various tracks to show the scope of the disc:

First is a simple left/right channel test. A voice from one speaker, then the other. Blindingly simple and a sure test for when you've been fiddling and are not sure which side the first violins should come from. The voice itself is a good test of reproduction - we are all used to the human speaking voice so faults are easily spotted

Second - Phasing. Here a voice is recorded in and out of phase, allowing you to spot instantly if you've got speakers/cartridge or interconnect leads wrong. Takes seconds and saves minutes especially if you've been fiddling with the crossover and have a nagging doubt... (We've all done it...)

Next a -20dB Pink noise left and right to see if the tone of both channels is the same. It's quite likely to be different if your room is asymmetrical like mine, but at least you can see the extent. The following two tracks do the same for left and right separately.

Now the most useful tracks of all...
The last four tracks on side one are 300 Hz tones played at +12, +14 +16 and +18 dB. These look horrendous with huge groove excursions. As the level increases your cartridge will mistrack, heard as a buzzing/crackling. The beauty of this test is that one channel will mistrack first. This is because the stylus will be pressed harder against one wall of the groove than the other, the one in less intimate contact will let go first.
By adjusting the anti-skate of the arm the stylus can be brought into equal contact with both sides of the groove. At this point the mistracking will disappear or be equal on both channels.
I've yet to find a cartridge that will track all the grooves perfectly so this simple test allows you to set the perfect anti-skate setting for your arm. It'll show you how vague the normal method of setting the same anti-skate as downforce is :-)
It also allows you to fine-tune the downforce. One way of reducing mistracking is to increase downforce but this will only help up to a point and the downside is that the coils/magnets of the cartridge will be forced out of perfect alignment and so effect the performance.
The range of playing weights specified by a manufacturer are generally those where the innards are perfectly aligned, by using the test record you can judge when increasing the tracking force ceases to reduce mistracking. Inevitably this setting involves compromise but at least now you can make an informed choice.
A word of warning. These tones only test how well a cartridge tracks a 300 Hz test tone - not music! As a measure of relative tracking ability of various cartridges they are a guide only and the tracks on Killer records are a better bet...

Side two begins with another 300 Hz test tone and this is repeated in the middle and end of side two to check consistency of tracking. The result is that minor changes in cartridge alignment will make all three playable with equal fidelity.

Track two and three are sweeps from 25-5 Hz along with a 1 kHz tone. Track two is in phase so gives a horizontal movemant at the stylus, track three is out of phase so the movement is vertical. It sounds complicated but what happens is this... You'll hear a tone and a voice counting down the frequency. At some point the tone will "warble" and the cartridge wobble visibly. This is the resonance frequency of the arm/cartridge.
If the resonance is too low - say 6 Hz as with a very compliant cartridge and a high mass arm the result is a cartridge very sensitive to footfalls and a sod to cue. On the other hand if the resonance is to high - say 20 Hz as with a low compliance MC cartridge and an ultra low mass arm the resonance will be audible and will colour the sound. Though this test does tend to spot when you've bought the wrong equipment it can also show the effects of changes in damping.

Last but one is a cartridge azimuth test. Here a 300 Hz tone is played out of phase. If the Azimuth is correct the sound level will be the same from both speakers but they should cancel if the amp is switched to Mono.

Last is an unmodulated groove i.e. silent. This is a cracker for seeing the effects of different plinths on rumble, supports on feedback etc.

So nothing very interesting to listen to, but an essential part of any record collection. I'd go as far as to say that this disc is as useful as an alignment gauge or a stylus pressure gauge and we know that no vinyl nut would be without either of those. For the cost of a full price CD it would be foolish to let the sound of your expensive turntable be well below par...