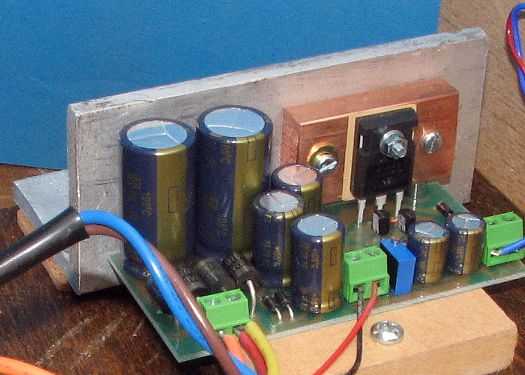 The power to please?

In 2008 I reviewed the Virtue Audio.ONE and .TWO class-T amplifiers and very much liked what I heard. The V1 and V2 came with a choice of two switched-mode power supplies (SMPS) offering 24 or 30 volt supplies, and these worked very well with the amplifiers (more so the 30v SMPS), having been carefully selected to do so by the designers. But one of my hi-fi buddies suggested that the V1/V2 should sound better using a linear power supply, and I was keen to try one and see if he was right. The trouble was, I simply never found the time to put one together and try it. Anyway, as a single guy living on his own, I find the Christmas period very quiet, so I decided to put the time to good use last year, and build a linear PSU for the V1.

To start off, I was not planning anything special. A bog-standard linear supply consisting of a transformer, rectifier bridge, and smoothing capacitor was built from parts that I had lying around. A PC power supply that had long since stopped working, donated its case. Inside that went an 80 VA/18v transformer, a rectifier bridge, and a few capacitors: 10,000 uF, 6800uF and a 100nF in parallel. Apart from a mains switch, fuse, cable gland and umbilical lead, that was it.

That basic linear supply sounded quite different to the 30v SMPS that I had been using. The sound was more subtle, with a greater range of tonal detail. The bottom end wasn't quite as well controlled as with the SMPS because the latter doesn't sag under load. But over all, I would say that I just preferred the linear supply (that 80VA transformer was a little on the small side too).

The results with the basic linear supply encouraged me to go for something 'better' and I decided to try the discrete regulated supply that Audial designer, Pedja Rogic, had drawn up for a regulated Gainclone supply. As I had one of these circuits built, it was a simple job of using a 30v transformer instead of a 25v type (used in a Gainclone supply), and replacing the 27v zener diodes with some 30v types. This regulated supply produces an output voltage of around two volts less than the value of the zener diode used.

Before I could test the regulated supply with the Virtue amplifiers, I needed to make up a soft-start circuit as recommended by Virtue to protect the switch in the V1/V2. Virtue kindly sent me their circuit but I had a problem sourcing one of the parts in the UK so I wrote to Paul Hynes and asked for his help in choosing a replacement. When I told him what I was doing, he asked me if I would like to try one of his power supplies with the Virtue amps, and of course I said yes. Anyway, back to the regulated supply first.

As expected, the regulated supply sounded a lot better than the basic supply. It had that extra tonal range, more subtlety than the SMPS , but held the bottom end together as well. But I had a slight problem in that the output transistor in the power supply was getting alarmingly hot. A larger heatsink helped a bit but it was still too hot for my liking. So although OK for testing purposes, I wouldn't use that supply on a permanent basis, and am looking around for an alternative to the BD911 that will handle more power, and stay the course.

Before I had even finished the soft-start, and tested the regulated supply, the Paul Hynes PR3G2-30 power supply module arrived. It required a 25v transformer so I 'borrowed' one (300VA) from a Gainclone PSU, and put both module and transformer into a case. The PR3G2-30 has a built in soft-start so apart from adding a hefty heatsink, and an umbilical lead to the amp, it was ready to go. By the way, I test every power supply that I build before connecting them to any item of hi-fi, to be on the safe side. And to test them I use a light-bulb test unit that takes a lot of the risk out of testing a new PSU. You can find full details of how to build and use such a device here. 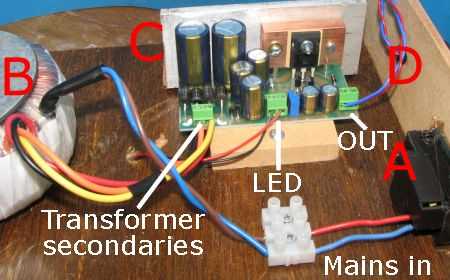 The PR3G2-30 module requires only an IEC inlet socket (A), a 25 volt transformer (225-300VA with twin secondary windings) (B), a heatsink (C), an LED (not shown) and wire to locate it away from the module, and an umbilical cable (two wires and a suitable plug) (D) to build the complete PSU.

I connected the PR3G2-30 up to the slightly modified Virtue.ONE that has the volume control bypassed, and currently uses a pair of 2.0uF Kimber Kaps instead of the original Auricap DC blockers. The PR3G2-30 is adjustable between 24v volts output, and 30 volts; and I started off with it set to 24 volts. Using the PR3G2-30, it is immediately apparent that everything is better focused. Imaging is a tad sharper. The sound-stage remained wide and although the depth was not necessarily deeper, the instruments/performers were more sharply located at the different 'depths'. There was a strong impression that everything, but particularly the bass, was held in a vice like grip. For me, one of the great strengths of the V1/V2 has been the timing, and that was still in evidence with the PH supply. In fact there was nothing to dislike about it, and it was clearly the best supply that I had tried with the Virtue amps.

Adjusting the output voltage on the PR3G2-30 brought much the same improvement that I got when using the 30v SMPS instead of the 24v SMPS. The scale increased and it was immediately obvious that these amps worked to their best potential with 30 volts as opposed to 24v. 'Massive Attack' really was MASSIVE! The bass seemed to gain another octave of depth but stayed very taught. Percussion too gained from the extra volts, appearing both better defined, and more clearly portrayed wherever it was located in the sound-stage. Often the location of drums, particularly in a large orchestra, are a bit vague, there, but not pin-pointed. With the PR3G2-30 driving the V1, I could tell exactly where they were. Best of all when I turned up the volume, everything stayed just as 'tight'! How nice of my neighbours to take a winter holiday allowing me to fully enjoy Hendrix, Eat Static, Afro Celt Sound System, Deep Purple etc at levels it was meant to be played at!

It wasn't just the 'heavy' stuff that this amp/PSU did well. On acoustic recordings, every nuance was portrayed clearly: the artists breathing, finger slides on guitar strings, piano pedals etc, all seemed more emphatic than with the SMPS. On good recordings, there was much more of an impression of the whole piano than just the notes being played. I could hear the resonance inside the piano, and the harmonics of the notes. Musical notes were much better portrayed with the attack, sustain, and decay, much more evident. I am also pleased to report that the V1 retained that quality which makes it easy to listen to it all day without fatigue - even at the higher sound levels. And the different PSU didn't change anything as regards the V1's ability to portray emotion. Classical tracks were truly moving, but now had more scale, more micro-detail, and more ambience. Voices contained more emotion, and it was much easier to identify an artist from listening to their voice. All this against an inky-black background, and when the music stopped - complete silence.

All in all I felt that the PR3G2-30 was a perfect match for the V1/V2, and I suspect that it will be too with the new range of Virtue amps that are due out soon. I haven't yet heard the V1/V2 with a good battery supply (the batteries that I did try were smallish SLA types) but I would be very surprised if batteries would be significantly better than the PR3G2-30, if as good.

But how did the regulated supply compare with the PR3G2-30? Well both supplies used with the V1 were very good. But the PR3G2-30 was just that bit sharper, with slightly deeper bass. If you are handy at DIY, you could knock up the Pedja Rogic design fairly cheaply (the design can be found here) and be very impressed, although at the price of the PR3G2 module that I tested, I would say that the extra performance would easily justify the higher cost.

I hardly need add that I would give both the supplies tested with the V1 a very hearty recommendation. There will be the usual questions about buying a finished PR3G2-30 at around twice the cost of the Virtue V1 but I still have no hesitation in recommending one, more so for those of you who don't have the knowledge or facilities to take the DIY route. The PR3G2-30 module at 120 UKP is a very cost-effective upgrade for those of you who can do a little bit of DIY. You only need add a case, transformer, heatsink and LED. If you buy one of the Paul Hynes umbilicals, you wouldn't even need a soldering iron to complete the job. I used a 100mm length of aluminium angle picked out of skip for my heatsink and the output transistor hardly got warm. If your speakers are harder to drive, you may need something slightly larger.

The combination of V1 or V2 with the Paul Hynes supply is simply stunning, and I doubt very much that you would be thinking about upgrading your amplification once you hear what they do together. I am told that a number of DiyParadise Charlize owners consider the 12 volt version of the PR3G2 supply to be the ultimate PSU for their amps, so if you own another type of class-T amplifier, then you should consider one of the Paul Hynes supplies if you want to squeeze the last gram of performance from it. I have been torn between my Gainclones and the little Virtue amps since I reviewed the latter a couple of years back. But the addition of the PR3G2-30 means that the Gainclones may now be gathering some dust!

I would like to end this review by reminding you that the Virtue V1 and V2 sound very good with the 30v SMPS. I'm aware that we reviewers have (or should have) some responsibility in what we write, and how we influence our readers. (Do I sound like our editor on one of his editorial rants?) So if I thought by writing this review that I had made those of you who can't afford a linear supply like the PR3G2-30 for your V1/V2 unhappy with what you have now, then I would be unhappy myself. It's easy when reading hi-fi reviews to get that feeling that the grass is always so much greener on the other side of the fence, particularly if you pay to cross that fence. In other words it is easy to convince yourself that you can't possibly be happy with what you are presently listening to without buying the reviewed product, when you have been quite happy prior to reading the review. So to put this review in context, let me state that the PR3G2-30 is probably the best thing that you can supply your V1/V2 with but that doesn't make the V1/V2 with an SMPS a 'bad' thing to have in your system. If you can't afford a linear supply now, perhaps put one on your wish-list, but please don't let that spoil your enjoyment of your present system.

Please note - At the time of writing this review, the PR3G2 supplies are not shown on the Paul Hynes website due to his other commitments preventing him spending the time to update the site. So if you want one, please contact him via the site.