It's no secret that here at tnt-audio.com we are fans of the Lehmann Audio Black Cube phono stage - it remains one of our references and the ethos of a simple box where the money has all been spent on the inside rather than on the marketing department's Christmas dinner is something that I think I can safely say floats our collective boats. In addition to the Black Cube (in all its various guises) Lehmann also makes a range of amps, headphone preamps/DACs and accessories - many of which we've reviewed. And amongst the accessories they manufacture we have the object of today's review - the 3S Device Feet.

Apparently for several years Lehmann has used "fabric technology" to cut down resonance in it's more upmarket products. It obviously has been of benefit as they've now decided to make it available to everyone in the form of 3S Device feet. These use a combination of the fabric technology and a 3 piece string suspension system to isolate equipment from the world outside. Now there has long been a war in the hifi world between the advocates of isolation rather than coupling and vice versa. Each group or manufacturer uses various versions of science to justify their products - it's a bit like religion (but with at minimum some semblance of proof!). Personally I'm willing to try most hifi accessories and I have a fairly open mind so on with the testing!

There are 3 versions of the feet - one for under equipment (the 3S point 1), one for under speaker spikes (the 3S point 2) and one with threaded rods that can be screwed directly into speakers or components (no prizes for guessing they're called the 3S point 3). The 3S Point 3 variants actually exist in 2 further subdivisions depending on whether your speakers have M6 or M8 threads. For those who insist on using screws in pounds per furlong fortnight (aka imperial) measurements - well you'll have to use the point 2 version. Norbert Lehmann was nice enough to send me 8 of each type so I could try them in a variety of configurations. Oh and they are available in Silver (above) and Black (below) versions so you should find something to go with your system and decorative preferences

The 3S point 2s were tried under Audio Note J Spe speakers on their dedicated stands and the 3S point 3s under my LV IBX-RW3s. 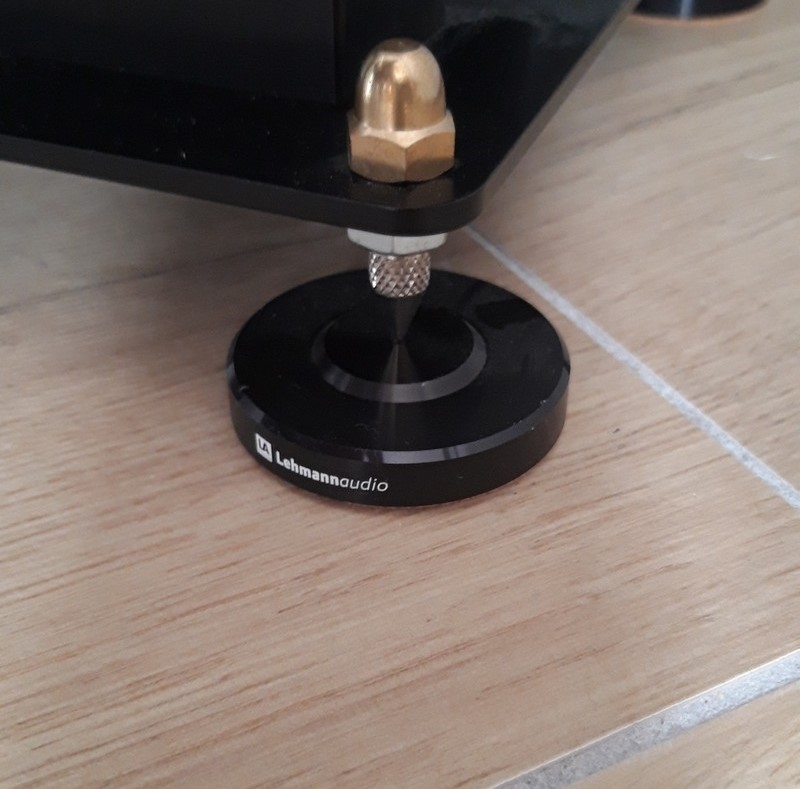 I'm going to split this into 2 - the 3S point 1s under components and the 3S point 2 & 3s under speakers as the effects are to my ears different but in both cases beneficial. Fortunately the effects are similar on different components so this is going to be a overall impression as I'm sure most of you don't have the same components I do so specific component by component testing will be of similar interest to most of you as watching a game of bowls in the dark.

The 3S Point 1s were initially somewhat difficult to judge. It's obvious that they are doing something good but it was difficult to pin down exactly what and how to describe it. You miss something when you take them out of the system but it's not as if there's a fundamental change in feel - ie the 3S Point 1s don't appear to do any harm which is a very good starting point. There's no change to the style of presentation of the music - my Naim CD player still sounds like a Naim for example - you're not going to get a fundamental change in the way your system plays things.

Finally the playing of the Red Hot Chilli Pepper's version of Stevie Wonder's Higher Ground provided a form of epiphany and I realized what's happening so I can describe it to you. There's a global reduction in hash on what is a fairly poor but very fun recording. The drums and in particular cymbals are clearer and better placed in space. The guitar is also easier to follow.

My initial thoughts based on this and other component tests were to say that there's definitely a distinct improvement in the upper part of the frequency spectrum but this isn't at the expense of bass weight and there's no impression of the music being faster due to an artificially created accent on leading edges. I could have been tempted to use the lifting of a veil analogy but in the end I don't think it's totally appropriate as that would imply across the board clarity increase effects. But even what I wrote above relative to the RHCP track didn't appear like a satisfactory answer so I thought I'd try a cheaper component which has a rattly case and no specific feet or any luxuries like that in the hope that the feet would be in a position to make the most difference.

And It was using the feet under this lowly Panasonic Blu Ray player that really brought things home. The rather dry presentation of the Panasonic is transformed into a presentation that shows up reverb around voices and now drums have a shell which resonates and not just a head (and some studio trickery too). In essence the feet add(or more exactly remove from hiding) the flesh that should be on the musical bones that are already there. Just play the track Love off of Lana Del Rey's Lust for Life album. Without the feet under the Panasonic it's pleasant enough but it's as if it's a demo without proper production. Roll out the feet and suddenly the track takes on a new personality. As an example Lana's voice has greater body and depth and hangs better in space towards the listener. It now sounds like a more expensive player that's showing you what's actually on the disc rather than the facsimile the unsupported player provides.

The 3S Point 2 and 3s appear to have a slightly different but equally beneficial effect when used under speakers. A word of warning here - with the 3S feet in place your speakers are no longer fixed rigidly in space and will rock back and forth or left and right if you push them. I didn't catch our cat trying to climb them so I can't comment on their Feline Compatibility Rating but we're not talking Tacoma suspension bridge wobble here. It's nevertheless something to be aware of.

The first effect of the feet is entirely positive  - they allow you to easily move your speakers on hard floors. This was straight away a points scorer for me - I hate dragging spike protectors across my tiled floor with all the risk that entails. Even if they had no other effects I'd be tempted to recommend them on that basis alone.

Fortunately the sound related effect of the 3S feet is much more significant and doesn't just come down to convenience. For a specific example (the effect is similar on other speakers so I'm not going to confuse things further) I've been using the Audio Note J Spes recently - I won't reveal too much as they're the subject of an upcoming review but suffice it to say that their imaging is of the wide and shallow variety. The sound seems to be locked in the plane between the drivers. Adding the 3S feet frees the sound from the speakers and the imaging becomes much more precise with better spatial positioning and depth. There's also a significant improvement in instrumental tone and colour - as an example the synthesizers in Martin Garrix and Dua Lipa's Scared to be Lonely have better texture and more impact in addition to being better delineated in space. The whole sound stage projects with greater impact and spaciousness at the same time.

Removing the feet and going back to spike shoes was a disappointment. Leaving aside the purely impractical nature of spike shoes (vile things that they are) the sound loses body, precision and drive and frankly there were no areas where I felt the standard setup was better. Which begs the question why have those of us with hard floors been putting up with the standard ideas for so long?

I've become quite a big fan of these devices and have yet to find a case where they produce negative results. The speaker versions are more immediately obvious in their effects but the component feet when used under the right device bring about some fairly impressive improvements too. I understand why Lehmann use this technology on their higher end products and it's great to have access to it at what is a fairly reasonable price. Obviously at the lower end of the market there will always be a case for a component upgrade for similar outlay but the overall consistent performance will mean you can benefit from these for a long time as your system evolves. Well worth trying - I can't see you being disappointed.

DISCLAIMER. TNT-Audio is a 100% independent magazine that neither accepts advertising from companies nor requires readers to register or pay for subscriptions. After publication of reviews, the authors do not retain samples other than on long-term loan for further evaluation or comparison with later-received gear. Hence, all contents are written free of any “editorial” or “advertising” influence, and all reviews in this publication, positive or negative, reflect the independent opinions of their respective authors. TNT-Audio will publish all manufacturer responses, subject to the reviewer”s right to reply in turn.