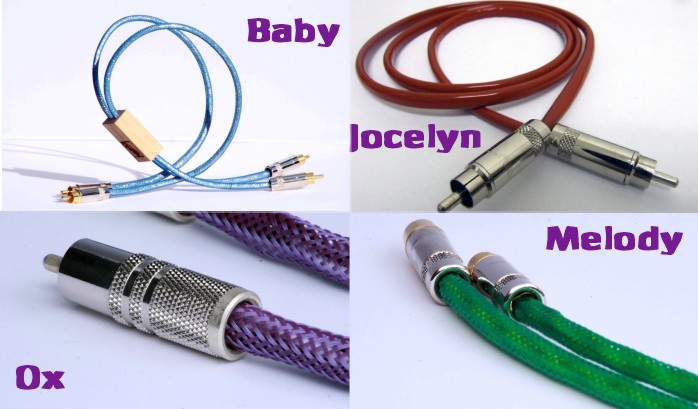 Well, encouraged by my experience with the Audience cables, I decided to ride my luck and do another cable review. This time I am looking at cables that cost a lot less than the Audience cables, and obviously aimed at the budget end of the market. My Audio Design (MAD) are proud to claim that their products are made here in England, rather than in the Far East. They chose Cardas cables for their product range, with Neutrik connectors used for the terminations, at least for the cables that I reviewed. They offer quite a substantial range too, with prices to suit all pockets. But it was decided for this review, that I would audition four of the lower price interconnects (from the SPL range), the Baby, the Jocelyn, the Melody, and the OX (the later being a digital IC).

The Baby is constructed from a twisted pair cable, and has a light blue jacket. The Jocelyn is also constructed from a twisted pair cable, described by MAD as 2 20.5 AWG, and with a red jacket. The Melody uses 4 20.5 conductors which I take to be two twisted pairs. That has a light green jacket, and like the Baby and Jocelyn, it uses Neutrik RCA plugs. The Ox uses Cardas coaxial cable, has a dark blue jacket and is fitted with Cardas Rhodium and Silver-plated, non magnetic eutectic brass RCA plugs. All cables supplied were about half a metre long and each pair is held together by a wooden joiner.

I used a couple of systems to listen to these cables but first I connected them all up to the output of a tuner and left them like that for around a week to burn in. The main system used to assess the interconnects was a modified Logitech SB3, a modified Scott Nixon DacKit DAC, an Audiodigit TubePre, a Monrio MJ class-D amplifier, and Mordaunt Short Pageant2 speakers. I had requested two sets of each IC but only one of each arrived. The reason that I request two sets is so that I can run the same IC between the DAC and pre amp, and between the pre amp and power amp. As I only had one sample of each IC, I decided to use the MAD cables between the DAC and the TubePre, and use some Audience ICs for the pre amp to power amp link, as they are neutral sounding .

OK, if you have read my cable reviews before, you will know that it won't be too long and drawn out. I started out with the Melody. It sounded congested, muddled, and the sound stage width was almost non-existent. I couldn't honestly find anything positive to say about it. Next up was the Jocelyn. This sounded clearer than the Melody but once again the sound stage width was almost non-existent. So in went the Baby, and at last I could breathe a sigh of relief. This was a much more enjoyable experience, the sound being clear and having good rhythm and timing. There was a balanced presentation as regards frequencies with both ends of the range being very good. And yes, that sound stage width was back, stretching from wall to wall.

So what was going on? The cheaper IC clearly out-performing the two more expensive samples! This was troubling me a little but later in the day, I had the idea to swap the MAD IC's with the Audience IC's, ie Audience between DAC and TubePre, and the MAD IC between the TubePre and amplifier. This time, both the Melody and Jocelyn sounded much better. The sound-stage opened out on both cables, and the Melody sounded much less congested. In fact, it was much harder to differentiate between the three IC's although I still felt that the Baby provided the clearest sound.

So why the huge difference between the two listening sessions? I am fairly sure that it was down to how well the DAC, with it's passive I/V stage could drive the cables. The coaxial type cables, used for shielded IC's typically have higher capacitance, and that can affect the ability of the DAC's output to drive them properly. There is a trick to help overcome that problem, and that is to place a resistor (of between 20 and 100 ohms) in line with the signal output of the DAC. That effectively isolates the cable capacitance from the output stage of the DAC.

But what this experience brought home to me is just how much an IC's performance can change depending on where it is used in the system, and on the equipment that it is connected between. And this difference is probably greater when using shielded cables with a higher capacitance. If I had only auditioned the MAD IC's between the DAC and TubePre, I would have formed a very poor opinion of them and passed that on this review. In a way, it's re-enforced my belief that all cable reviews are of quite limited value, and there really isn't a substitute for trying cables in your own system. That said I suppose that I have to give an opinion on the MAD IC's so I will. The Melody and Jocelyn cables perform adequately for shielded cables and are worthy of an audition. The Baby is unshielded and a decent cable for the price. Like many cable suppliers, MAD offer quite a large range of cables making it even harder to pick the 'right' one for your system. I believe that in such situations a good supplier should be prepared to loan you a reasonable number of their cables so that you can try them out at home and choose which is best for you. A small handling change could be made to cover costs but you offset that against the cost of travelling to a dealer to audition the cables there.

Last up for audition is the OX, a digital IC. Similar in appearance to the MAD analogue IC's the OX comes with a blue jacket and silver coloured plugs. My experience of digital IC's is that most of them sound very similar, and the Ox is no exception. Given it's price I would have to say that it is a bit on the expensive side. But, before you dismiss the OX, there's a surprise! Somehow, I had been supplied with not a single OX, but a pair, joined together by a MAD wooden connector. As such I thought that they were analogue IC's and had tried them as such. And comparing them against the other MAD IC's they were clearly the best performers. In fact, for a shielded IC, they sounded open, and very musical. If I were choosing from the cables supplied for this review, they would be my choice for analogue IC based on sound quality, although as a pair, they do work out to be the most expensive!

As regards actually using the IC's, I found that all of the RCA plugs were a little bit fiddly to connect and disconnect. There is a trend these days to use low mass plugs that are said to sound better. So the 'heavier is better' concept has gone full circle, and more utilitarian looking RCA connectors are now assumed to be more desirable. Going on the performance of the Baby and OX, there is nothing sonically wrong with the RCA plugs supplied. It's just that they look a bit 'plain'. Of course, once they are plugged in, most owners will not see them anyway but if you like bling hi-fi, these probably won't do it or you.

Well it is almost mad if you will excuse the pun. The cheaper Baby out-performing the two more expensive analogue IC's, Melody and Jocelyn (particularly when used after the DAC). And the digital IC, accidentally supplied as a pair, sounding best of all! Of course, you may find things work out differently in your own system! If anything this review illustrates just what a lottery it is buying hi-fi cables (even when you have a review to go on). So take my advice, always ask your dealer to let you have some samples to try out at home, in your own system, before committing to buy! And do test them in each part of your system too!