Oscillators are also in the number of the most celebrated generators of electro magnetic interference. This can obviously reach out for the digital or audio circuits and cause problems, even though the clock output is quite clean....

I made a very simple test by simply measuring with a spectrum analyzer the voltage at the end of a 7 cm diameter loop made of solid core copper wire mounted on a plastic support keeping it 5cm over the (wooden) plane on which the clock under test was placed. 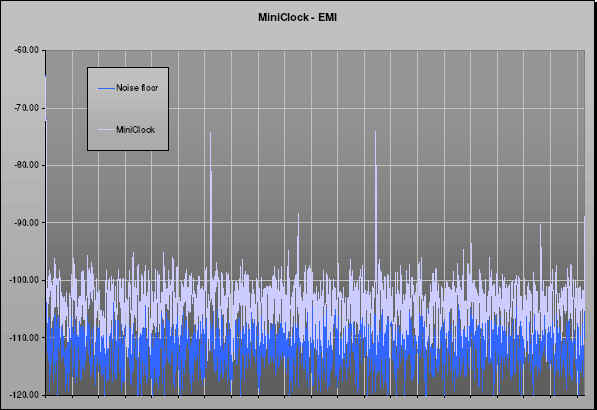 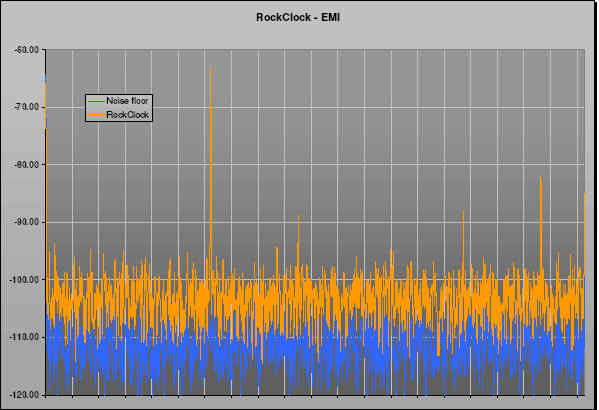 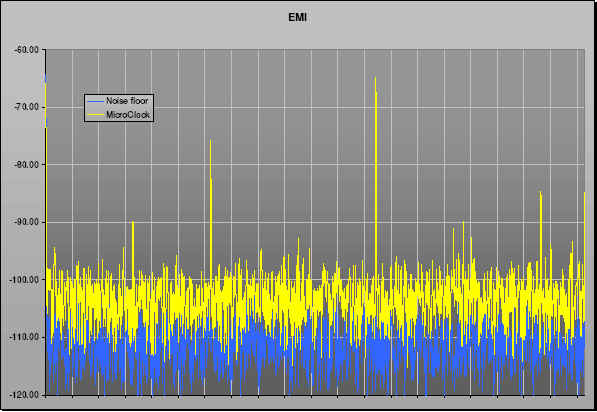 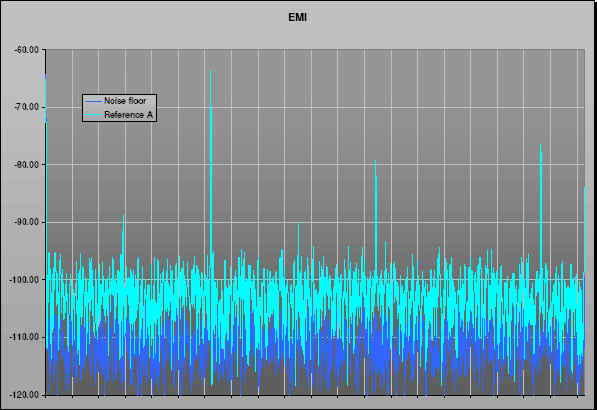 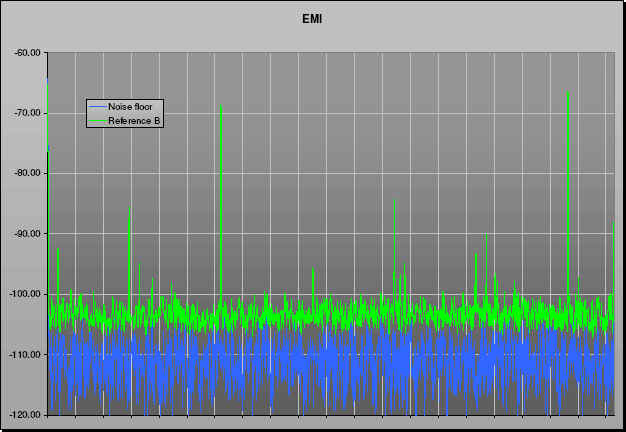 Note that apparently the MiniClock with its enclosure is the best unit in the bunch; RockClock and MicroClock, however, are not worse than the competition.

The major effect of any good "super" clock, in my view, is to eliminate drastically that typical uncertainty, lack of pace, discontinuity in the flow that affects (and affected even more in the past) any low cost CD Player.

It is rather hard to explain, even in direct comparison demonstrations of two players, one with a high quality clock and the other with the standard one, the listener initially finds it not so easy to understand what is different, even because it has nothing to do with tonality and all the other parameters that are usually discussed. But as soon as you have understood which is this specific aspect, then you are perfectly able to recognize almost immediately which clock is in use.

Music with a good clock flows far more natural, impact is stronger, bass more defined, you can find yourself tapping or playing air guitar most of the time, and this without any major change in the musical and tonal balance. Often even the soundstage benefits in size and detail.

Actually, it is rather mysterious how the human brain can detect and recognize such infinitely small changes in the reproduction pace. In the best case, the differences are in the range of nanoseconds (1E-9 seconds): in a nanosecond a light beam covers 30cm (12"), an electrical signal something less. Nevertheless, our brain can detect such imperfections...

No, I cannot make myself get too angry with audio designers that completely overlooked the problem, when digital audio was young.

Net Audio clocks perfectly follow the expected behaviour. There are differences between the clocks, but at least with the PD-S 505 they are far from huge, and are essentially affecting the pace, the rhythmic behaviour of the player.

The clocks were auditioned on the usual Pioneer PD-S 505, with Net Audio CD Clock Power Supply, in exactly the same configuration for our output jitter tests described previously.

Summarizing, the sonic performance matches perfectly the price list. As said, the differences are not huge, but even with a low cost player are perceivable. It can be questionable whether they are also worth the different tag prices, but personally I would say that with a medium-class CD Player this is definitely the case.

The only significant remark I have is that the Net Audio PSU is perfectly adequate for driving the MicroClock, but there must be some kind of incompatibility that makes it difficult to achieve the best results with the MiniClock and RockClock. The solutions seem to be inductive coupling or a further regulator stage (nothing complicated, in any case: three resistors and a transistor-like component is all is required).

I think it is also correct to address here two other issues, which are however common to any device of this kind.

The first is the fact that, after clock installation, the CD player warranty is obviously voided. I cannot anyway see any workaround, apart waiting for warranty expiration before installing a new clock...

The second is price. The cost of most superclocks is very high, compared with the circuit complexity. The problem is the amount of R&D required, and the very limited number of pieces sold. However, it is not a pleasure for the buyer.

For the rest, I cannot see any further issue. I add just some notes.

You'd better consider carefully dimensions and enclosure of the RockClock and MiniClock: they are not so small, and their metallic enclosure requires some more isolating room around, so that the whole object requires some real estate for mounting.
Its also true that most players today are half empty, so that it should not be a real issue to fit this objects in the cabinet. Microclock has been specifically designed for solving the issue, and for sure it can stay inside any player.

Power and output polarity indications are missing on the Microclock (the board is completely stuffed with components), while on Rock and Microclock and Power Supply the markings are clearly inscribed in the copper of the printed circuit board. I just would like, however, to find someone that takes into account the fact that there are a lot of long-sighted people, like me...

Finally, I do not like screw terminals for low voltages in these applications. The thin, solid core wires you should better use cannot be safely and firmly connected without modification of their physical structure, which often brings either to uncertain connections or to breaking in the most unexpected ways. I definitely prefer soldering, which at least makes eventual problems immediately evident. Note, by the way, that soldering is not prevented by the presence of the screw terminals.

In any case, for reviewing, screw terminals are simply great... I love them.

The RockClock, with all the proper cares, is an outstandingly good clock, definitely better than the references used in this test. The MiniClock is not as good, but still is a good choice overall.

Just to be clear, even without taking special precautions, they remain very good clocks, at the same level or better than the references.

Given the price tags and the fact that the clock is only one of the many components of a CD player with a significant effect on jitter, as shown by the tests above, you cannot get the best from them in low end CD players: in order to fully exploit their qualities, it is necessary at least a medium level player (and in this case an inductive coupling seems advisable). However, the differences between the two clocks can be appreciated also with almost entry level CD players.

For what regards the price, they are aligned with the majority of the competitors.

On the other end, MicroClock is a sort of surprise: it does not reach the same level of quality, neither from the sound nor from the measurements point of view, but is is not so far away as you could expect, requires less care in clock line termination, is far less sensitive to its power supply setup, costs far less and is small enough to be installed anywhere.

Its quality level is enough to improve low cost players sound, and the price tag, even considering the power supply, is one half of the others. As such it is real value for money, and represents something unusual in today's world, where everything seems to tend to top performances and top prices.

We want to thank David Pritchard for providing the samples for the test and the help. And, well, especially for the patience... setting up all these tests has taken far longer than the classical 9 months.

Part One of Three | Part Two of Three