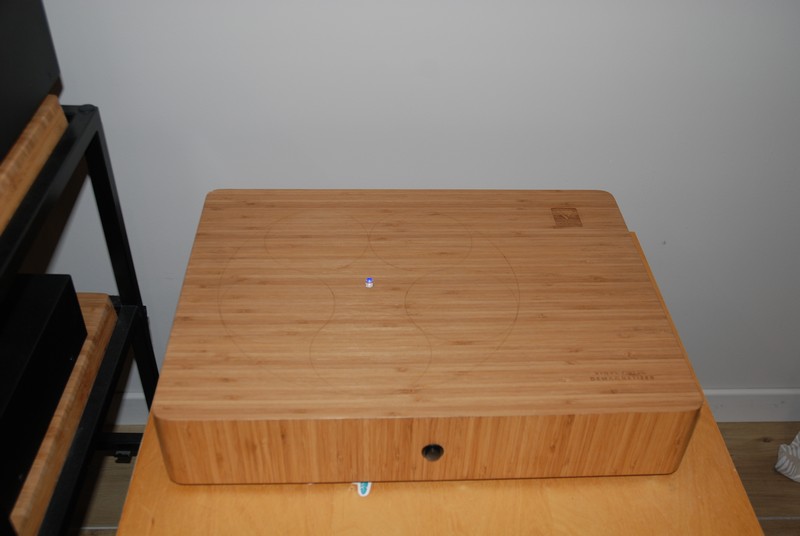 A bit of (de)magic for your discs

A few years ago I went to a small hifi show and in one of the rooms there was a round shaped thing on a table looking like the front bit of the Starship Enterprise (you know the bit they detach when Kirk arses the mission up and the Enterprise is about to get blown to smithereens by a Klingon Bird of Prey but I digress). The chap demoing the system shoved my brother's vinyl copy of Orbital's Brown album on the machine for around thirty seconds while it performed some alleged demagnetizing routine. Whatever it did everyone in the room, be they familiar or not with the program material, agreed it substantially improved the sound. It also appeared to do a similar job on the system speaker cables.

Which brings us nicely on to the object of today's review - the VS Audio Vinyl disc demagnetizer. Now there may already be some wailing and gnashing of teeth among our readers - after all isn't TNT the home of zero BS, zero snake all and certainly zero fairy dust? This is still the case and if this device has absolutely no effect I will certainly say so. Fortunately the manufacturer hasn't wasted their time but we're getting ahead of ourselves a bit here so let's talk demagnetizing.

The theory is the following - all software be it CD or Vinyl has ferrous imperfections in it and these can become magnetized (apparently even vinyl pigments can also become magnetized). This apparently induces errors into the reading of the disc meaning that anything missed out can never be regained. Demagnetizing apparently removes these contaminants giving whatever is doing the reading be it a stylus or a laser an easier time.

Now I'm not saying I necessarily subscribe to the theory and some of the science does seem to me to be a bit dubious - how for example do ferrous materials get everywhere and how can these minuscule amounts of ferrous metals affect optical and dragging a rock through a groove playback. But I wanted to see if the positive experience I'd had with the Starship Enterprise could be repeated with another unit and (especially interesting for the budget conscious audiophile) at a significantly lower price.
So onto the unit in question. The VS Audio comes in three versions - a CD specific one, a vinyl specific one and the Daddy Bear of them all - the CD and Vinyl one I have here.

It consists of a bamboo box looking a bit like a turntable plinth with a power inlet and on/off switch round the back and a small push button on the front. On the top surface there is a small "spindle" to centre vinyl and machined circles showing where you can place 5 CDs. There's also a puck to centre 45rpm singles. To use it's really simple. Place the side you want to play on the machine face down and press the button on the front. The spindle lights up blue to show the machine is running and then switches off when the cycle is complete. You can then put the disc in its player and do some listening. I promised VS Audio I wouldn't open the box to find out how it works as the technology is patent pending. So it could be Kryptonite, some form of field coil or a hamster running around with a tape machine erase head. I'm hoping that when the patent is granted Sava from VS Audio will tell me but for the time being I'm respecting his wishes.

As I know a lot of you are skeptics when it comes to this sort of thing I did some listening myself and then assembled some friends to see if I was hearing things or not. The difficulty in this test is that once the treatment has happened you have no prior reference for A/B/A testing (we all know the issues with A/B where the supposedly better component is always played second). So I went down our local music emporium and bought duplicate copies of CDs I already had but that had never been demagnetized. I even bought 2 copies of Lana Del Rey's Lust for Life to minimize the chances of having different CD versions from different pressing plants.

We listened to the discs in a variety of orders including the occasional "play the same one twice but don't tell anyone you're doing it" trick. The results were interesting confirming in two of three cases my initial observations. My wife, however, was unconvinced as to the effect of the device. So what are the effects we're talking about here? As a general rule the soundstage gets deeper and wider with more instrumental detail. Bass appears to get slightly lighter but this may be due to an increase in definition (I'm speculating). There also seems to be less hash and more space around instruments. There are no negative effects on timing, speed or fluidity or if there are I didn't spot them. There also seem to be the same type and magnitude of effects on both CD and Vinyl.

This was all very intriguing so I thought I'd try some science and see if I recorded both treated and untreated discs into a Digital Audio Workstation (Cubase in my case) it would allow me to compare the signals. I also thought that if there were no differences between each version inverting one recorded signal whilst playing them simultaneously would produce no sound (this occurs if you reverse the phase on a signal that has be copied to a second track of the DAW and you play them simultaneously). Any sound present would show signal differences. So I tried it and to cut a long story short the experiment fell flat on it's head. It appeared that even recording the same signal twice gave differences once the signals are examined. I don't know if my sound-card isn't good enough or if the problem was due to the CD player. In any case this issue negated any results I may have had from treated and non treated discs so feel free to shout Epic Fail at me and sorry for making you read that last bit.

So where does this leave the VS Audio demagnetizer? Personally I think it has positive effects from a high fidelity point of view and there certainly aren't any massive negatives but I can't prove to you it does work with any science but the same goes for any audio review that seals with accessories. The effects appear as significant as the previous machine I mentioned but at about a third of the price. Ah yes price  - the potential deal breaker. This unit retails at 750€ although the format specific ones are much cheaper at 299€ for the CD and 499€ for the vinyl one.

Complaints? I have one - it would be nice if the blue light that centers the vinyl was a bit taller and chamfered to ease the installation process - I'm being picky here but centering the disc can be a briefly frustrating experience. As this is a relatively niche product I feel that any potential irritation should be minimized! Paying customers can be put off by minor things. Or is that just me and what my wife refers to as my Rain Man tendencies... 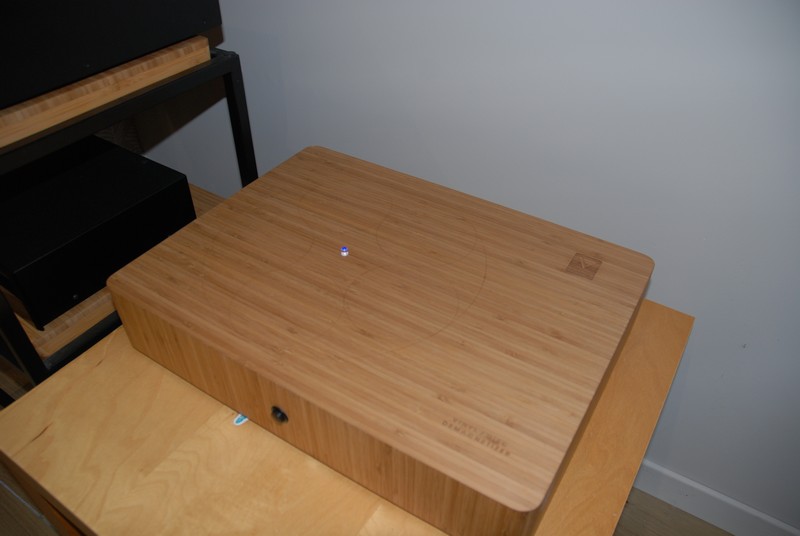 So would I buy one or more importantly would I recommend you buy one?  I think it depends on your personal situation. I've certainly appreciated having it and it's a quick enough process to use on every disk you're going to play - especially if you're listening to CD where you can do 5 at a a time!

From a value point of view I don't think it's going to add 750€ worth of performance to a 750€ player but it does do it's thing at a software level so the improvements are likely to be across the board no matter what machine you have and those results will also carry through to any further component upgrades and for those of you with a CD player in your car still the improvement will be there as well assuming you can hear it above the engine noise (not likely in the case of certain of my fellow reviewers). The improvements don't affect the inherent qualities of a player so if you like your player as is you'll still like it when it's running a demagnetized disc. That said if you only listen to one format and the CD only version suits you then you're likely getting the same improvement for 299€ which is all of a sudden a lot more interesting and all of a sudden you may be getting a better result than buying a 1000€ player to replace your 750€ one

All things considered if you have a well sorted, well installed system and are looking for an across the board all format improvement it may well be a useful icing on the cake type of investment and I can't see you being disappointed - you can certainly spend a lot more money and get less of an improvement. The unit also comes in at a significantly lower price point than some of the competition so scores some bonus points in that dept. Just be prepared that justifying a box that has no moving parts and that seems to have a magic effect may cause a few raised eyebrows from friends and spouses. No less plausible than certain religious relics though so you never know..  If you're still in the beginner's camp and are evolving your 1k€ system towards the mythical High End Holy Grail you'd probably be better off looking at other parts of your system first including cleaning the software which certainly makes as significant a difference at a (if you're willing to do it manually) lower price.