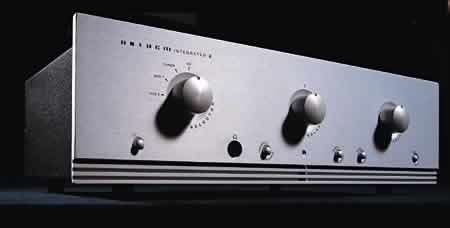 Minimalism. Webster's Ninth New Collegiate Dictionary defines this word as "the theory or practice in art or design of using the fewest and simplest elements to achieve the greatest effect". Minimalism describes perfectly the latest integrated amplifier from Sonic Frontiers - the Anthem INT 2. An improved version of the original INT 1, this latest version is more powerful. The Sonic Frontiers brochure of their entire lineup states "the ANTHEM series is designed for superb performance within cost constraints". I think Sonic Frontiers is being too modest here, because if the INT 2 is representative of the Anthem product line, then I would say that anything but cost was a design consideration. With a minimal of parts and an absence of extra features that most people don't need, the INT 2 delivers the goods with simplicity.

An integrated amplifier is a combination of a preamplifier and an amplifier on one chassis. They share a common power supply, and coexist under one roof. It is an efficient and cost effective way of amplifying music. Although purists would whole heartedly endorse the concept of separates (preamp and amp on separate chassis), for the average music lover such a configuration is not always necessary or makes much of a difference.

The INT 2 is a big unit - 48cm X 13.5 cm X 50cm (W x H x D). It is also heavy - 17.2 kg. The beautiful aluminum front (which is available in silver or black) is very similar in look to the CD 1 CD player (reviewed previously here on TNT Audio). In fact the entire unit looks similar to the CD 1. The front dimensions of both units are identical, so these two units would make a great combination.

The front panel is minimalism at its finest. No tone controls here! Just a input select control (CD, Tuner, Aux 1, Aux 2), balance control (indented), and a motorized volume control. The INT 2 comes with a remote control. The remote control governs volume, mute function, and SSP bypass (the INT 2 has a surround sound bypass loop). A LED underneath the balance control shows the status of the unit - turn-on mute, normal operation, muting, and SSP bypass.

The INT 2 has a 45 second delay upon turn on (turn-on mute) according to specifications. This feature is designed to protect your speakers against a sudden burst of power upon turn on. I measured the turn-on mute three times, and each time obtained a delay of 33 seconds.

The INT 2 is rated at 90 watts per channel (20Hz - 20kHz) for a 8 ohm load. Into 4 ohms, the INT 2 is rated at 145 watts per channel. Signal to noise ratio is <-90db at 80 watts. Total harmonic distortion (THD) is <0.1% at 1kHz at rated power. Purists who use solid state equipment are more used to seeing THD figures of 0.01% for solid state amps. But remember, the INT 2 uses vacuum tubes in the preamp section. Vacuum tubes have more distortion than solid state components. This is what gives tubes their characteristic sound.

The INT 2 has three circuit boards inside. The main circuit board is very large and covers most of the interior. A second smaller circuit board is for the input and output jacks (they are mounted directly on the board). A very small circuit board covers the balance and volume control function. There is very, very little wiring inside the INT 2. This is minimalism at its finest! Since, clear and clean sound is related to the complexity of the signal path, having the paths as short and direct as possible contributes to these attributes.

The main circuit board has very high quality components. MultiCap and Wima capacitors are used. Holco and Draloric resistors are also found on the board. The balance potentiometer is manufactured by Noble. The RCA jacks and speaker connectors on the back are all gold-plated. A nice touch! I particularly like the speaker connectors - they are very easy to use. Each channel of the preamp section uses a Sovtek military 6922 vacuum tube.

The most important component of an amplifier is the power supply and its transformer. This part has to provide the voltage and current to meet the needs of the music up to the rated specifications. The INT 2 has a huge power transformer (9.5cm W X 11.75cm H X 13.25cm D). This is a good indication that the transformer can provide a large amount of power. Interestingly, during operation I did not find that it became hot or even warm. This is a good thing. Transformers which get excessively hot during operation may signal a strained power supply. Plus excessive heat contributes to premature part failure. The INT 2 power supply has lots of filtering - four 10,000 uf electrolytic capacitors.

Like the CD 1, the on/off button is connected to the on/off switch by a plastic rod. In the INT 2, unlike the CD 1, the on/off switch is located midway (not at the back) so the rod is not as long as that found in the CD 1. Still, I would have preferred to see the rod made of metal so it can't break. Interestingly, that is what the designers did for the input selector switch. The switch itself is located directly on the input/output circuit board at the back. A very strong metal rod connects the input selector on the front panel with the switch. This rod will not break.

I can see the value of locating the input switch at the back right at the source input jacks. No wiring and the shortest path possible. Minimalism again! This contributes to more pure sound.

The volume control is motorized. I found that the control itself had quite a bit of backlash. I would have liked to see that tightened up.

To evaluate the INT 2 I listened to four types of music - classical, rock 'n roll, disco and easy listening. For classical I chose Vienna (Fritz Reiner conductor, Chicago Symphony Orchestra). This CD is a Living Stereo reissue (BMG Music 09026-68160-2). Midnight Oil, Diesel and Dust, was my rock 'n roll selection (CBS Music BFCK-40967). The new Cher Believe album, which has ten different versions of the same song, was my disco choice. To me this song is more disco than rock 'n roll (Warner Bros. Records 9 44576-2). Merril Bainbridge, The Garden, was my choice for easy listening music (Gotham Multimedia USD-53019).

I compared the sound and music qualities of the INT 2 to my reference stereo system.This system consists of a Dynaco PAS 3 preamp connected to either an original Dynaco ST-70 or a Dynaco ST-70 Series II amplifier. Both of these amplifiers use tubes ( both previously reviewed here on TNT Audio). Source material were CDs played on a Parasound C/DX-88. The Parasound was fed into either the INT 2 directly or the Dynaco PAS 3 preamp. Speakers were Paradigm 11se Mark II.

I found the INT 2 to be mellow and low keyed with the classical passages. The music flowed slowly and was gentle. Some passages were lively, but in general the sound was soft and easy going. It seemed as though the music wanted to get through, but was being held back slightly. The INT 2 did not sound like either of the Dynaco amplifiers for classical music. Somehow, the INT 2 sounded in between the sound of these two amps. Since both of these amps were connected to a tube preamplifier, and the INT 2 uses a tube preamp section, comparing the INT 2 with the Dynaco amplifiers seemed like a fair comparison, notwithstanding preempt differences.

Rock 'n roll was a completely different story. Here the INT 2 became alive and almost jumped out of its chassis. Midnight Oil was loud and punchy. The sound had life and was potent. It was almost as though you could hear every instrument and note. In this respect the INT 2 sounded like the Dynaco ST-70 Series II. This is understandable since, although the Dynaco was a tube amp, it had solid state rectification. The Dynaco Series II had many characteristics of solid state amps, especially for rock 'n roll. The type of rectification (tube or solid state) can have a profound effect on the overall sound of an amp.

Since the INT 2 and the CD 1 are very similar in appearance, towards the end of the listening tests I connected the CD 1 to the INT 2. Interestingly, the serial number of these two units are in series (INT 2 has serial # 107511, and CD 1 has serial # 107512). It is as if they came off the assembly line together! The sonic contribution of these two Anthem units together was very pleasing to the ear. There is no question that synergy is at work when the two units are hooked up to each other. The CD 1 was great for classical , country, and easy listening music, but less so for rock n' roll, whereas the INT 2 was better with rock 'n roll and disco than classical. So together, the shortcoming of one could be made up by the strength of the other in sound reproduction.

The INT 2 is an excellent amplifier and can belt it out when it has to. Sound is clear, clean, and there are large volumes of amplification available. Unlike most solid state amplifiers, you will not get tired listening to this amp.
This is no doubt due to the presence of vacuum tubes in the preamp section.

A great amp in a great package with a simplicity of design. This is reflected in the clean sound. Very clean. Minimalism!