"Road to Damascus" - a convert to valves tells the story... 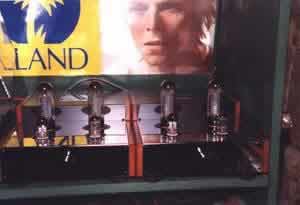 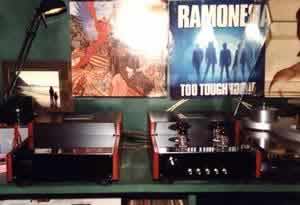 
A while back when I started doing reviews for Hi-Fidelity magazine, the editor, a certain Mr David Chessell (who also owns Audion) enquired what my system consisted of. The list was as follows... A Gyrodek/Roksan Artemiz/AT33e and Micromega Solo front-ends, a Naim 62/140 combo and a pair of rather beautiful, and home made transmission line speakers.
It was a set-up that I had arrived at over a number of years and I was very happy with it. David's response was that it was fine "but where were the bottles?".
Some correspondance followed where I explained that I liked mostly rock music, and that nice though valves were they were not likely to improve on my Naim set-up for rock music and anyway I was saving for a Naim 72/hi-cap/250 (upgrade-itis).
The last thing I wanted was that warm relaxing "easy listening" effect that I'd always associated with valve amps, an impression I have to say gleaned mostly from magazine reviews.

David's response was - "I'll send you a pair of 30 watt mono's and you can see what you think...". A few weeks later a pair of Audion E.T.P.P. 30 Watt mono's arrived and I unpacked them trying not to drop valves on the floor (OK I did drop one but it bounced).

As for the specification - the monoblocks are an EL34 design running a pair in Extended Triode Push-Pull (hence ETPP...) producing 30 watts into 8 ohms, all pure class A (unlike nearly all so-called class A transistor amps). They have the highest quality binding posts and phono sockets and are a tribute to the kind of quality a small "cottage industry" company can produce.
Inside, the mains transformer is a toroid giving the amps a lower profile than most valve amps, and all components are of good quality - polypropylene caps etc. The output transformers are tapped for 8,4 or 2 ohms helping the compatibility, particularly with continental speakers which are often rated at 4 ohms.
Lastly an Alps pot is provided and an inaccessible power switch situated on the back - leading to singed arms if you're clumsy switching them off.

And now we get to the first of my problems with these amps - from a financial point of view... They were drop dead gorgeous. Mine were in chrome with wooden side cheeks and combined with those glowing EL34's were a perfect match for the Gyro.
The second and real problem was without a pre they could only be used direct from my Micromega - each mono has a pot so this is a very cost effective way of running them. My wife was by now very suspicious of the whole affair and I insisted she was with me when I fired them up.
SHOCK HORROR! what was going on? Where was the warm woolly sound? The whole tonal balance was very "Naim", but as well as the detailed Naim midrange the magic extended to either end of the spectrum, coupled with increased dynamics. The soundstage opened out beyond the speakers, the drummer shuffled back a couple of yards behind the band and music flooded out.
My first thoughts were that here was a big upgrade, and turning to Kate I tentitively asked what she thought "I never liked the Naims - they sounded *clattery* this is so much smoother". Now smooth was not a word that sprang into my mind, but there was a certain lack of harshness - not, please note, a rolling off of highs, in fact quite the opposite, cymbals shimmered, fuzz guitar "fuzzed" more etc, it was as if a layer of electronic hash had been taken away.

A month later bankruptcy threatened and I received the matching Silver Knight 2.0 two box Phono pre. Identically boxed to the ETPP's this is a two-box all valve design with a hefty regulated off-board power supply. Again all sockets were excellent giving five inputs including a phono and a tape loop. Two sets of output phono's were provided giving scope for multi-amping.

The effect of adding the pre was an increased solidity to the sound and stopping any residual tonal changes with volume. The long awaited phono section proved excellent, better than the Naim and a Hart Phono amp I had borrowed....
Within minutes the Gyro confirmed it's superiority over the Micromega and there followed the sort of listening session which ends with record sleeves spread liberally round the floor and ringing ears - yes 30 valve watts could drive my very inefficient speakers, (83 dbl with a following wind) - though in a room bigger than my 4*7 metre listening room they would have run out of steam.
The dynamics of the amp were now superb. I'll give you an example: On the opening track of Nirvana's Nevermind the intro is a few slightly distorted chords, relatively restrained for Nirvana, then the massive drum kit explodes out from behind, sounding as if the drummer is using bass-ball bats rather than drumsticks.
This, if everything works as it should, always makes the hairs at the back of my neck tingle. Please note I'm not talking about volume here, but the contrast and tension of those opening chords and the percussion that follows. Sadly the CD of Nevermind failed this test whatever amps I tried...

With any such upgrade there are inevitably downsides. They do harden up a little when pushed, perhaps unfairly, beyond their limits and into my inefficient speakers. A pair of Cabasse Farella 401's I have at the moment on test (94dbl) were easily driven beyond my personal pain threshold without distortion. My search is now for some efficient kit speakers with a smooth impedance curve to get the best out of the amps. The bass is crisp and deep but does lack the old Naims timing in this area, sometimes seeming to lag a little in comparison. The phono section of the pre is MM but sensitive enough for low output MC's if you turn the volume full on, though don't forget to turn it back before playing a CD (ouch!) Lastly, they're sods to keep clean, but I purchased a ladies thick make-up brush which helped with the dust.

So I'm a convert. The Audion amps, both pre and power, comprehensively outperformed the Naims in almost every area. True the Audions were twice the price, but it was not the result I expected from a valve amp. These amps really rock, their ability to "open up" older and compressed recordings was miraculous.
They actually resulted in my record buying habit slowing considerably as I found so much more in my old and favourite recordings. The biggest single improvement? - Lyrics. It's always embarrassing when you sing the wrong lyrics to a song, and I found myself being caught out again and again by the Audions where I sang what I though were the right words to a song which the Audions plainly picked out as something different.
This is real "easy listening", where lyrics, harmonies and tone of instruments are offered up on a plate, you don't have to strain to listen for them. You forget "Hi-Fi" and listen to music. It's a difference that's almost impossible to describe as in many ways it is subtle, but the result is that you become more and more contented with what the amps do, rather than picking holes in their performance, the first symptom of the dreaded "upgrade-itis!".
Yes these amps are expensive, but more important for me they are a one-off purchase, I won't be hunting around for something to replace them in six-months time (probably :-) ).
Yes Audion make power amps that cost five times as much, but I'm just content with these, from now on my money is going on records and after all, that is the point of the whole exercise.

These amps taught me one other important lesson, that when you listen to any component, forget the technology involved. If you have a hulking great transistor power amp fired up you can kid yourself that it sounds meaty and powerful.
In my case I knew that the Audions would sound soft and friendly and woolly, because they were valve amps - I was wrong. They just sound good, and that in the final analysis is all that matters.