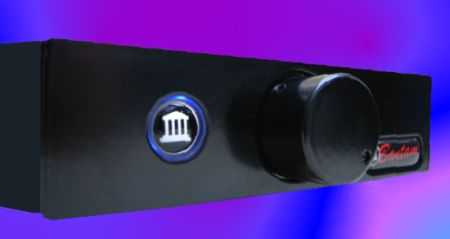 Do I hear somebody saying "oh no - not another class-T amp review"? Well yes and no. The Temple Audio Bantam Gold is another tiny amplifier based on a class-D chip. But the chip in this case was not manufactured by Tripath. Instead, Analogue Devices supplied the IC that the Bantam is built around so perhaps should we call it a class-AD amplifier? Temple Audio call it a class-D amplifier and are keen to point out that it is a much more modern implementation of this technology than the class-T chips offer.

What is familiar about the Bantam is its compact size that is similar to many class-T amps. It's a very sturdy little enclosure (CNC machined aluminium),flatter and wider than the Hammond-style cases that many of these types of amplifier are built into. Being wider and flatter it's a bit more stable once it is set up with all the cables attached. The finish is a high-quality glossy stove black, and it boasts some good quality (Neutrik) connectors. There's no blindingly bright blue LED, instead the power button lights up with a soft blue circle to show when the Bantam is powered up. Also because it is wider, there is slightly less problem getting everything connected, although if you want to swap power supplies, it is fiddly to get the power connector out while the IC's are connected. Not really a problem for most owners, nor a criticism from me (you simply can't have more space on such a small enclosure), more a warning for compulsive tweakers, and other reviewers. 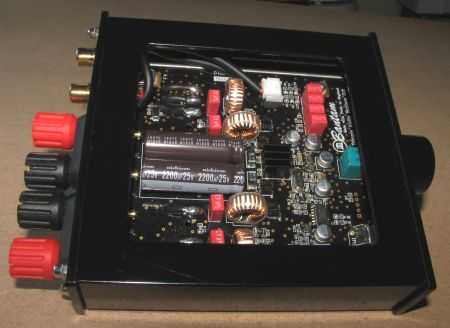 Temple Audio will be publishing full specification details on their web site so here is a brief description of the Bantam Gold. Inside the case is the AD ADAU1592 chip built on to a military-grade, gold-plated PCB. In fact, the Bantam Gold has been conceived as a high-quality piece of hi-fi rather than a budget item built to the lowest cost. That's worth keeping in mind when you look at the price - also that it is built in the UK rather than the far-east. All-in-all there is nothing to dislike about this cute little amplifier, but how does it perform?

I gave the Bantam Gold a couple of days to burn in. Temple Audio suggest that this can be done simply by leaving it powered up so I left it powered up at night, but played music through it during the day time just to be sure. It is worth mentioning here that there is absolutely no power up/down noise with the Bantam (thanks to a function of the AD chip) so there won't be any nasty noises coming from your speakers. For the audition, I used a very high quality USB DAC, and my modified Mordaunt Short Pageant II speakers. The Pageant II's have a rated sensitivity of 96db at 1 metre produced from 6.5 v.r.m.s. It's much more usual to see sensitivity rated at 2.83 v these days, and that would make the Pageant's approximately 89 db at 1 metre. If these figures mean nothing to you then put more simply, the Pageants are slightly higher than average sensitivity which means they will produce a relatively loud sound for the power put into them.

I mention the above because the Bantam Gold has a relatively low gain setting. Depending on what it is partnered with (source as well as speakers) and depending on the material played, it may not go loud enough. So Temple Audio have provided a means of switching it to a higher gain setting that significantly increases the volume level (+18 db). The trade-off is that the sound quality is very slightly better at the lower setting. To change the gain, the power button is held in while the Bantam is powered up. When the light flashes, the button is released and the amp is then in high-gain mode. When the button is released, the amplifier powers down, and pressing the button again results in it powering up in high-gain mode. It's a very elegant solution to changing the gain setting but I wonder if a simple switch on the rear panel may be slightly less confusing.

Even with a considerable burn-in period, I found myself changing my opinion of the Bantam a couple of times over the first few days of auditioning. However, it eventually settled down, and I found myself enjoying the sound more and more. Temple Audio sell their own (Tripath-based) class-T amps, and the Bantam Gold is clearly aimed at the same market. So the obvious thing to do was to take a class-T amp and compare the two. The class-T amp that I chose was the highly respected Trends TA 10.2 (almost identical to the TA 10.2P that I reviewed in October 2009 but with a volume pot). Lucio had also reviewed the original TA 10.1 and we were both of the opinion that it was one of the better class-T amplifiers.

Well the comparison was most interesting. The Trends TA 10.2 sounded lighter and airier than the Bantam. The Bantam had a slightly darker tone but was much more solid sounding overall. The phrase that I actually wrote down in my notes fairly early on in the audition was "more grown-up". There is absolutely no problem telling which is which, the two sounds are quite different. The Bantam sounded more like the Virtue class-T amps that run at higher (24-30) voltages, but without the extra power output that the Virtue amps enjoy from their higher power supplies. What you do get with the Bantam, more so in the low gain setting, is amazing smoothness and obvious lack of grain. Bass is also firmer and more substantial than the TA 10.2. While both amps have excellent imaging, the increased solidity of the Bantam presentation makes the performers and instruments seem a bit more real, more physical if you like instead of ethereal. I felt that the sound stage was deeper with the Bantam Gold because the elements at the rear were more tangible.

With the Bantam hooked up to the USB DAC that I was using, I did find the need to use the higher gain setting. However, using either the Virtue Piano, or ONIX CD 10 CD players, there was enough gain at the low setting. So it does depend on what you will use the Bantam with, as to whether you will need to use the higher gain setting. The sound quality, as Temple Audio are honest enough to point out, is not quite as good as at the lower gain setting but it is still very good, retaining all the advantages over the TA 10.2, but with slightly less of the smoothness, and lack of grain that is evident on the low-gain setting. There's very little other way of putting it, but if you want the excellent sound quality of a class-T amplifier but with more 'maturity' the Bantam is just what the doctor ordered.

The Bantam Gold sounds great with its SMPS but I wanted to try it out with a linear power supply. As I had the Trends PW-10 available, I hooked that up to the Bantam. The PW-10 works perfectly well with the Trends 10.2 amplifier, and when connected to the Bantam I felt the sound was preferable to the SMPS. I had my own linear (regulated) 12 volt supply to try in place of the Trends, and that worked perfectly well too, sounding slightly 'darker' than the PW-10. As I have stated before, the use of a linear power supply with these class-D amps instead of the supplied SMPS is often down to taste and budget, but after a couple of days of using the Bantam with the 12v linear supplies, I am going to put my vote in for the linear supply, and it is something that I would recommend Bantam Gold owners considering as a future upgrade. The sound was still absolutely clear and precise, the bass still there in quality and quality, but there is slightly more subtlety to the sound. It also confirmed my opinion that the Bantam is a great little amplifier rather than just a good one!

While on the subject of power supplies, it should be noted that the Bantam Gold can run on power supplies of up to 15 volts. At 15 volts you will get more power, ie 25 watts, while a 12 volt supply provides 15 watts. But in practice, the Bantam will sound the same at typical listening levels. And the power output should not be confused with the gain of an amplifier. In other words, your system won't sound louder with a 15 volt supply. The only real justification for a 15 volt supply would be if your speakers were a really difficult load.

Another option that I tried (based on past experience with this type of amplifier) was to add in a valve stage to the circuit. My own home-brew (5687 based) pre amp was used, and I went back to using the KingRex UD-10 USB DAC with the lower output level. With some gain in the buffer, I was able to leave the Bantam on its lower gain setting and get enough volume from the system. This was a simply stunning combination, although ironically I don't think that the Bantam Gold needs a valve stage as much as the other class-D amplifiers that I have tried one with. However, it does benefit from the extra gain in the valve stage, allowing the use of its lower gain setting with just about any source.

In conclusion, the Bantam Gold is a cracking little amplifier and, in my opinion, a real step forward from the Tripath-based amps that run off the lower (12) voltages. It is just more mature sounding, richer, more solid, and over all, more satisfying, while retaining the excellent clarity, timing, etc. that we have come to expect from class-T amplification. It does cost considerably more than its rivals such as the Trends TA.10 but trust me, it does sound that much better. Also take into consideration the excellent build quality, and the fact that it is made in the UK rather than China.

Please don't get the impression that the linear power supply, or valve stage, is mandatory. The Bantam will sound great, just as it comes with the SMPS. But it is good enough to warrant the upgrades when you are ready to try them. So, for those of you worrying about the imminent disappearance of those Tripath chips, it looks as if we do have a replacement. Even better news, from what I have heard with the Bantam Gold, the AD chip has got more potential too! If you have tried one of the 12v class-T amps in the past and found it wasn't quite for you, don't write-off the Bantam Gold. And if you are looking for a compact amplifier with big (make that mature) amplifier sound, I don't think that you will be disappointed with this tiny class-D example. In fact, the more that I listened to the Bantam Gold, the more I fell in love with it!