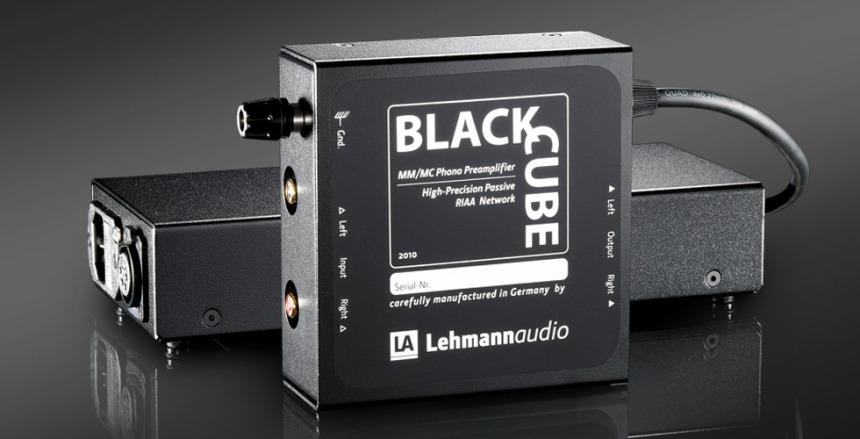 Lehmann Audio Vertriebs GmbH was founded in 1988 by Norbert Lehmann in Cologne, Germany. The first iteration of the Black Cube Phono stage was introduced in 1995, and there have been several iterations since. Currently the Black Cube is offered in four variations, from the entry level Black Cube Statement [previously reviewed here; to the Black Cube SE II. This review is for the Black Cube SE, which differs from the SE II version in only that the latter also features a bass rolloff filter for use with smaller speakers. TNT-Audio has also reviewed an older version of this model, the Black Cube SE + PWX previously.

The small unassuming case is not very sexy, but does allow for placement very close to the tonearm allowing for shorter interconnects. The enclosure of the audio section is made of a non-magnetic material (aluminium) and its top lid is mechanically dampened. The audio section contains additional modules for an efficient hum, HF and random voltage suppression. The use of a double-sided audio board also offers additional ground planes for a zero-interference operation.

Included is a free slot per channel for the solder-free fitting of a custom impedance. The passive RIAA filter network sits between two linear gain stages and uses polypropylene foil capacitors.

Direct comparisons were done against the previously reviewed Cambridge Audio 640P (MSRP $180USD) and the PS Audio NuWave Phono (MSRP $1,899USD). And also the Pass Labs XP-15 (MSRP $3,800USD) [review upcoming]. Only the first test was done with Ortofon 2M Blue. The remainder of the tests were done with the Ortofon MC Black cartridge [review upcoming].

"Belen Belen" (Claudia Gomez; Salamandra; Clarity; CNB 1002)
This minimalist recording is a pressed on 180g single sided LPs, and is a great showcase for female vocals and several acoustic instruments. This was the only test done with the Ortofon 2M Blue.

Through the Cambridge Audio, the presentation of the piano leaned slightly towards the dark. There was a lot of detail in the female vocals, more than I'd ever have expected given the very low price point for this remarkable phono stage.

The Lehmann Audio was a huge upgrade from the Cambridge Audio, and no surprise given the roughly quadrupling in price point. The Lehmann had way more seperation on the notes, also vocals were much more natural and 3D somehow. Also, there was quite a bit more detail and dynamic range. The Lehmann, however, also had the noisiest background of all the stages tested here.

The PS Audio seemed to throw the widest soundstage, but dynamics and realism on vocals was less than the with the Lehmann. The Pass XP-15 had the quietest background, and great separation of notes of all the stages tested here. But the presentation of female vocals not as lively as the Lehmann. The Pass also presented great detail and layers.

"Rag Hemant" (Ali Akbar Khan, Indian Architexture; Water Lily Acoustics; WLA-ES-20-SACD)
I use this track to examine the upper mid-range and treble regions, represented by the Tanpura and the Sarod respectively.

Though the Cambridge Audio [set at 55db, 100ohm] was not spec'd to handle the very low 0.3mv of the Ortofon MC Black, nonetheless it did a surprisingly good job. And without direct comparison to any of the other phono stages, it did not seem that there was any detail missing from the presentation. But through direct comparision it was plainly obvious the the reproduction through the Cambridge Audio was more of a 2D rendition rather than a full 3D, like the other three stages laid out. The sympathetic strings were audible, but only if you were intently listening for them. However, the resonances of the isntrument were lacking clarity and dimension when compared to the other 3 units.

The PS Audio NuWave Phono [set at 66db,60ohm] was much more involving than the Cambridge Audio, there was a lot more detail especially between the notes. The ornamentations on the notes added by the Ustad were much more vivid, and overall it seemed like there was a whole another dimension added. The sympathetic strings were audible, especially in comparison to the Cambridge Audio, but was lacking detail and vividness when compared to the Pass and the Lehmann.

The Lehmann Audio [set at 66db, 100ohm] was a big leap up from the PS Audio, the plucks of each note were now distinctly palpable, and the transient response was simply incredible. This was the kind of presentation, where I was glad to be done with note taking and then found myself indulging in just listening to the music. The Lehmann had a bit noisier background than Pass Labs, but the Lehmann had a much livelier sound. Also, with the Lehmann the sympathetic strings were more distinct and noticeable than any of the other phono stages. The Lehmann Audio definitely delivered my favourite presentation on this track.

The Pass Labs XP-15 [set at 66db, 100ohm] had the quietest background of the bunch. The presentation was very smooth and liquid, however the transients were not as punchy and palpable as with the Lehmann Audio.

"Blue Rondo A La Turk" (Dave Brubeck Quartet; Time Out; Columbia; CS 8192)
The intro has a lot going on with several instruments and lots of dynamics and transients. The double basss is beautifully played, but sonically speaking this recording of the instrument sounds like a hot mess, barely recognizable as a double bass.

The Cambridge Audio had the most trouble with the double bass, the instrument was barely recognizable and instead sounded like lumps of low frequency. Again, the overall sound of the Cambridge was 2 dimensional when compared to the other 3 units.

The Lehmann Audio presented the best separation of instruments of all the units on test. The Lehmann also made it easiest to recognize the double bass as an instrument instead of a lump of bass. In comparison to the other preamps in this test, the Lehmann at times sounded so fast on transients that I actually once checked to make sure the turntable was not spinning at 45 RPM.

The Pass Labs seemed a bit too heavy on the bass frequencies, and the double bass was not as recognizable in comparison to the Lehmann unit. The Pass Labs was overall a more laid back and mellower sound than the Lehmann Audio - mind you that was not lacking in detail, but rather more on the liquid and rich side in contrast to the fast and snappy presentation of the Lehmann. Here is where personal preference comes in, I personally much preferred the Lehmann.

"My bucket's got a hole in it" (Billie & De De Pierce , Jim Robinson's New Orleans Band, Jazz At Preservation Hall 2; Atlantic ; SD 1409)
This is a beautiful recording that I use to listen for performance on brass instruments. Lots of dynamics and "in your face" bark of the trumpet and trombone.

The Cambridge Audio was pretty well challenged on this track, the blats of the trombone were somewhat harsh and the seperation of notes and instruments was very obviously lacking when directly compared to the other units tested.

With the PS Audio the instruments seemed more distant when compared to Lehmann, not as in placed further back on a soundstage but as in lacking a layer of vividness and detail. The PS Audio was a huge improvement to the Cambridge Audio on dimensionality and separation of instruments and notes on this track as well.

The Lehmann Audio presented the bite of the brass instruments completely unmitigated, not additionally harsh, but brass instruments inherently have an aggressive sound and the Lehmann Audio was not shaving off any of the natural timbre. Instead I ended up lowering the volume a bit to take the edge off, I'd say the Lehmann presents things as is and the Pass Labs in contrast is a bit more forgiving. I very much enjoyed and prefer the Lehmann's unapologetic and candid delivery.

The Pass Labs really shone on this track, the inherent bite and brazen sounds of the trumpet and trombone were presented with a bit of smoothness and liquidity, but absolutely without losing any detail. I felt I could listen to this track at slightly higher levels, if I desired, on the Pass compared to the Lehmann.

The Cambridge Audio gave me very little to complain about till I compared it directly to the other preamps. The PS Audio was much more detailed than the Cambridge Audio, and the presentation seemed like a whole dimension was added. But the PS Audio could not match the Lehmann here. The Lehmann extracted as much life as could possibly from this old, worn and noisy copy. As on previous tests, I was glad to be done with the critical listening and note taking and then could indulge in listening to the album for pleasure. The Lehmann most made me want to just listen to music.

As I had suspected, on a mellow sounding track the mellow nature of the Pass Labs rendered a sound that was just a bit too subdued. The Lehmann was my strongest preference on this track as well, and by a considerable margin.

"Shamas-ud-doha" (Nusrat Ali Fateh Khan ; Shahen-Shah ; Real World ; 91300-1)
A fantastic recording of the master and his troupe. The soundstage is uncanny, and the dynamics and naturaless make this album a favourite of mine.

Again, the Cambridge Audio was very impressive till I compared it directly to the other preamps. Predictably the PS Audio did significantly better than the Cambridge, but was outperformed by the Lehmann.

The Lehmann again shone on this track, it even had better defined instruments and dynamics than the Pass Labs [66db and 76db gain], but the harmonium was a bit sharp at times as the instrument can be. The question one would have to parse when choosing between the sonics of the Lehmann and the Pass Labs is - do you want candid fidelity or a polished presentation that mitigates harshness. I prefer the former, but don't claim it is superior to the latter. With the Pass Labs, instruments and the stage popped out a lot more at the gain set at 76db than 66db. However at either setting sharp instruments like the harmonium were a bit rounded and mellowed, especially when compared to the Lehmann.

It should not be any surprise that the Lehmann Audio Black Cube SE was my favourite of all the phono stages tested here. The Lehmann not only provided plenty of detail, phenomenal transients and a 3 dimensional presentation on good recordings; it also is very plesurable to listen to. It may not be for those who prefer a more mellow and liquid sound, that bill would be better filled by the Pass Labs XP-15, but at 3 times the price.

My advice to those building pono stages - listen to the Lehman Audio Black Cube SE before launching any new product. If you cannot beat it's sonic performance or price, then don't bother. This is a benchmark product.