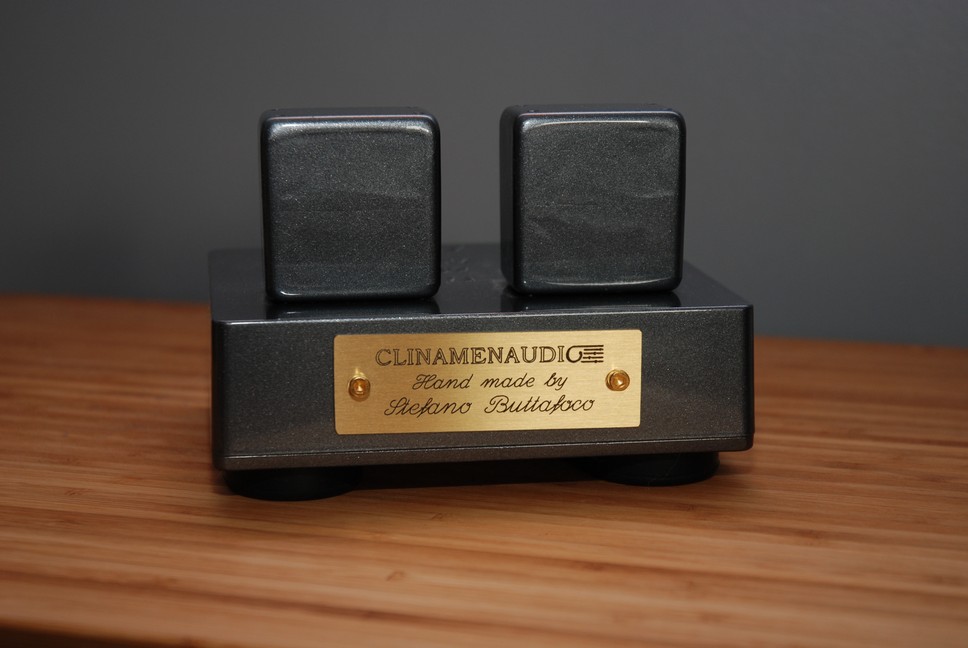 Users of low output moving coil cartridges have long been confronted with the problems of getting their cartridge's measly output (around 0.5mV) amplified enough to get it on talking terms with an amplifier that is used to receiving input voltages nearer the 2V mark from a typical CD player.
This combined with the different loading options required depending on cartridges can be a real headache when it comes to obtaining your perfect amplification solution. There are many good (and some very good) MM preamps on the market and these all come with the de facto 47kohm load and 100-150pf input capacitance that is considered normal for an MM cartridge.

The catch here is that somehow we need to match a cartridge that gives out around 0.5mV and expects to see 100  (or other value depending on the manufacturer) ohms with an input that presents a 47k load and expects to see 5mV. There are two ways of doing this in my knowledge - the active gain stage and the step up transformer. Now there are claimed advantages to both and this is not the place for a battle of the theories - after all this year's Nobel prize for physics has just been awarded for some work on donuts so a breakthrough in MC amplification is going to have to wait until next year.
In the case of the transformer the idea is to use physics intelligently to obtain what can be described as free gain by swapping voltage for current to get up to around the 5mV. The transformer can be wound to let the cartridge see what it's expecting to see and to perform at it's optimum.
So after that very brief explanation as to the whys and wherefores of Stepup transformers we come to the object of this reveiw. The Clinamen audio MC Step up.

Clinamen audio products are all hand made in Italy by Steffano Buttafoco and he can pretty much make you an entire system from a very turbocharged Denon MC via single ended valve amps to some very high efficiency speakers. All of which are finished with typical Italian flair - no black boxes here.

The transformer I have here is Clinamen's base model (I hesitate to use the word entry level as we're talking about a product that is over 1000 euros). It comprises 2 hand wound transformers with both 12x and 24x step up options selectable by simple switches - no disassembly required. You can get a slightly cheaper version without the switchable gain values that comes in at 950€ - in my case Stefano recommended the 24x and the sound had noticeably more body with the setting so if you order one listen to his recommendations.
The model I have is in a rather attractive grey finsh in an aluminium casing although you can have pretty much any colour you like if you let him know when ordering. I would however suggest sticking to colours in the Ferrari paint list. I can't see a genuine Italian being willing to paint a step up in the same colour as Paris Hilton's's Bentley Continental GT. My only critique with the looks is the gold plated fron plaque. I think a small plaque with just the Clinamen logo would be classier with the creators signature on another plate round the back. This is only my opinion and as an Englishman I'm on very rocky ground attempting to give style advice to any Italian!

Ordering is an interesting process as you're not buying an off the shelf product. Stefano asked me for my cartridge make and model along with it's data sheet plus the expected phono stages so he could make me what he calls a harmonisation network. This allows him to tailor the transformer to a specific cartridge and as a consequence optimise its performance. 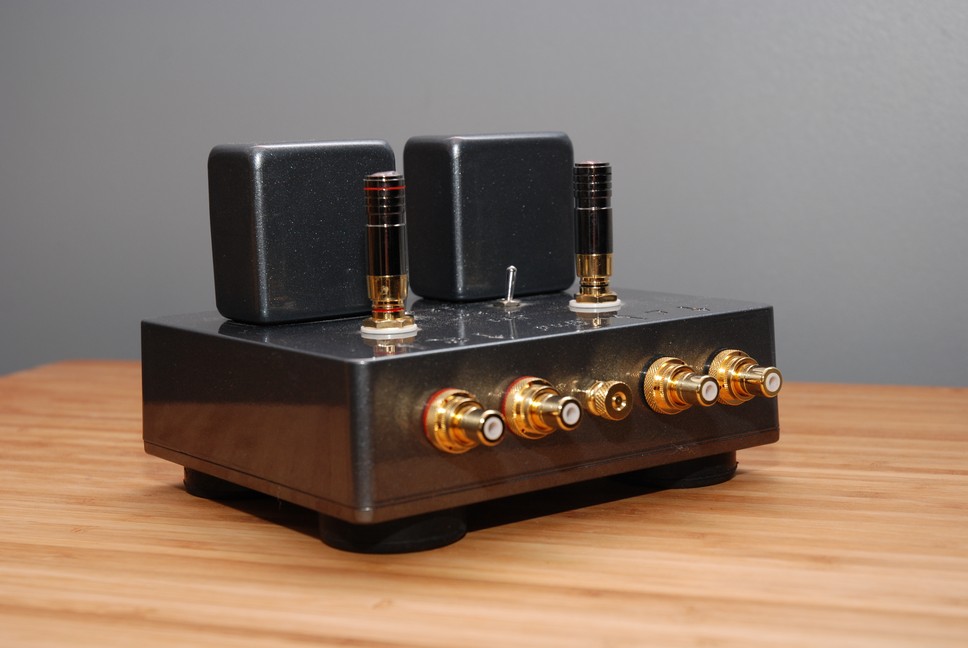 My understanding is that this is a completely unique feature in step up transformers and is why the Clinamen products have an extra set of phono sockets round the back. The networks are built into a pair of phono plugs allowing you to try the transformer with and without them . It also means that assuming you don't buy a new cartridge which requires a different turns ratio Stefano can take into account your new device and re-optimise the transformer for a very reasonable 70€ for a new set of plugs. This makes the Clinamen a potential product for life as it can adapt as your system changes.

Stefano advised me not to listen critiaclly for the first 10 hours with peak performance being acheived at around 25 hours. He's right that the sound does change during this time which didn't stop me enjoying records but did have me waiting impatiently to see what the transformer can do. 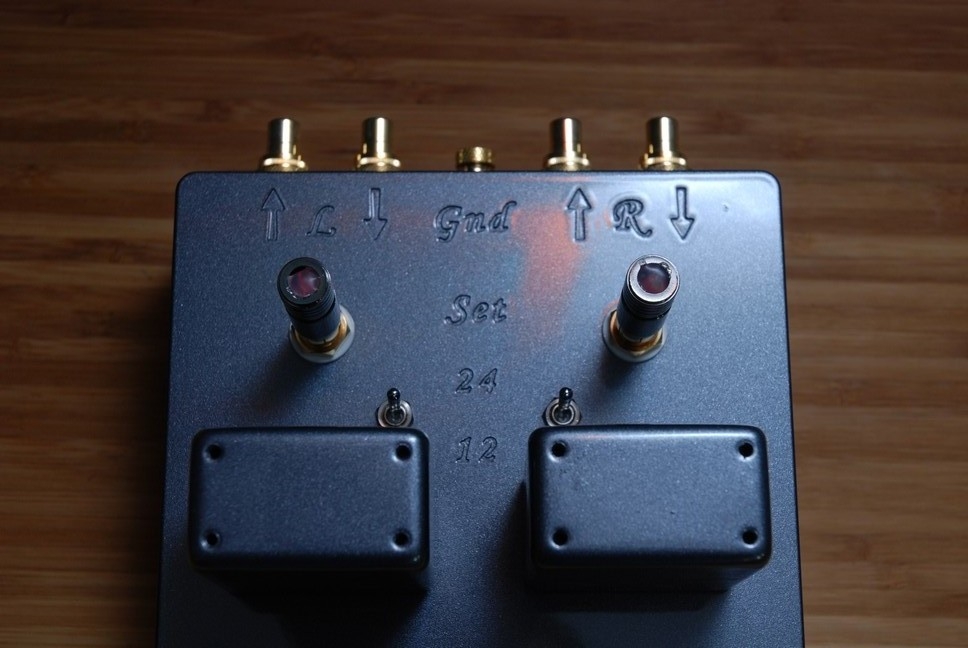 So what can it do? I ran it with my usual Reson Etile MC into either CEC PH53 or Graham Slee Accession Pre Amps. This allowed me to compare the transformer with the active MC stage in the CEC and see what the MM only Graham Slee unit could do when fed wih an MC.

The two combinations are quite different bit both equally appealing. Running the CEC and comparing Transformer to active stage there is an obvious sweetening of vocals and decrease in harshness on drum sounds. This combined with a reduction in grain but  the basic characteristic of the CEC remains intact with great pace and it's inherent fun quality.that makes it a pleasure to listen to and gets your feet tapping.

When running with the Graham Slee comparisons are a bit harder as it's not possible to do back to back active vs transformer tests. What I will say is the level of clarity over the entire audio band that this combination produced was quite a revelation. I recently bought Michael Jackson's "Off the wall" on vinyl and in respecting my own hi fi for beginners article from last year when a mate came round and wanted a listen I played him "Don't stop till you get enough" .To be honest I think he'd still be siting listening to this combo if he hadn't had to go home.
Stereo imaging is wide but precise with instruments clearly placed in space. Bass goes down low with the Red Hot Chilli Peppers "If you have to ask" having speed and weight. Complex mixes such as U2's "Until the end of the world" are no longer a mess of sound but guitars with distinct delays which are obviously treated to give almost a hooded quality to the repeats. I'd always thought my vinyl pressing of "Achtung baby" to be sorely lacking in dynamics and detail but the Clinamen/Slee combination proved me wrong on both accounts.

Running with and without the Harmonisation network brought small but worthwhile changes removing some grain from the sound. I would guess my cartridge is well matched to the transformer as the improvement was subtle.

Were there any downsides to this set up? The only one I found was that the amplifying combination showed up any faults in my deck (Linn Axis) and I'm sure a deck with better resolution would have provided even more information allowing more obvious differences between active and passive amplification solutions.

Those of you who carefully read the title will notice Clinamen also supplied me with their Harmonic Woods clamp so let's see what it can do as well. 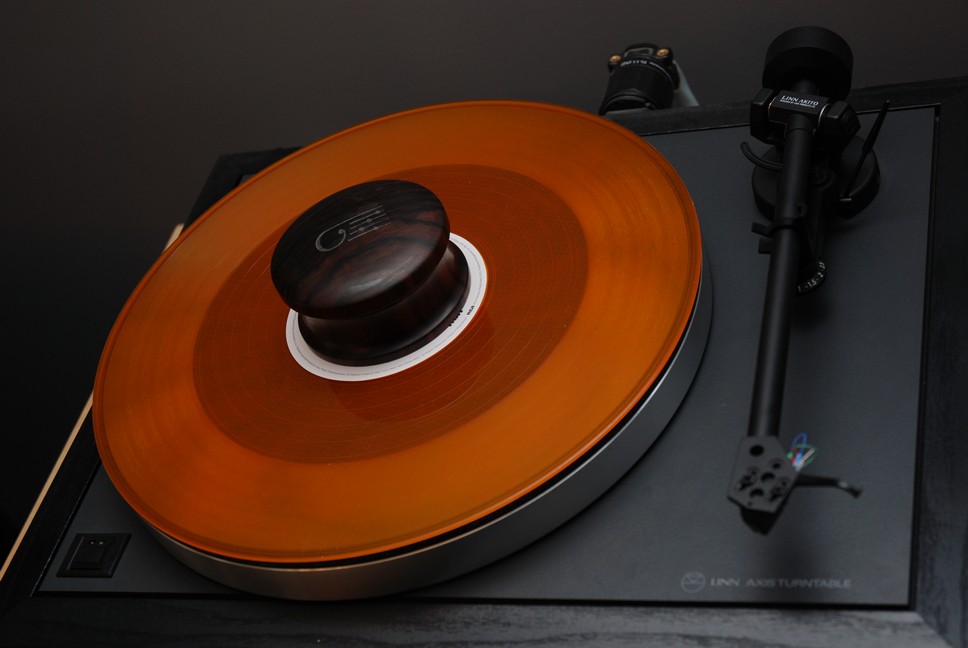 Keeping with the Slee/Clinamen combo I dug out Steve Vai's "Passion and Warfare" and played the track "Sisters". This is the calmest track on the album and whilst it's probably not that easy to play it features none of the usual fireworks, distortion and associated histrionics.  Firstly I played the track using the Michell Clamp supplied with my LV Mystic Mat. I really enjoyed the clarity and imaging of this combination - the drums are clearly placed in space with cymbal strikes high in the soundstage. Steve's guitar is as usual at a high level in the mix and projects in the centre of the soundstage.

I then dug out the Harmonic Woods clamp. This is a fairly large piece of wood that is beautifully machined and into which has been set a brass insert. The machining continues on the very pretty Clinamen logo to give an attractive item that would not look out of place on any traditional taurntable in the supplied brown colour. The only issue I had was the height of the clamp required the lid to be open when playing records. Not a big issue - you just have to be careful!

Anyway what does it do to the sound? To me it brings out the character and texture of the instruments. All of a sudden I was playing less attention to the pace of the music and finding myself interested in the sound of the guitar or the additional weight and warmth of the drums. All this without any noticeable killing of the speed or detail.
I also tried Neil Young's "Silver and Gold" album. Similarly the Harmonic Woods clamp kept the pace and musicality of the tracks but made Neil Young's vocals easier to follow and improved the drum sounds. There was an improved sense of flow to the music - all in all a very pleasant effect.

There's no doubt this is a quality set of products and both do what they are intended to. Should you go out and buy them? I think in the case of the step up you need to have a better front end than I do for the investment to be really worthwhile. I would suggest you need to be looking at the level of a Michell Gyrodec or similar (there are plenty of turntables out there many of which have featured on this site) which would fully allow you to appreciate the quality.  It works very well with both phono stages I have, is very quiet and has the avantage of being reconfigurable for a small charge to your next cartridge. If you have the necessary turntable and a good MM phono stage (the two stages  I have definitely qualify) then the Clinamen makes a good case for itself.

As for the clamp - whilst this could be considered an afterthought I'm not sure there are many 290€ upgrades once you have a quality deck that will bring this type of improvement. Of course you need to check there are no bearing issues due to extra weight and anyone with a fully suspended deck is going to have a lot more mass to bounce so resetting the suspension will be essential. Subject to those compatibility issues I like it a lot, it's well priced bearing in mind the level of craftsmanship involved and if you want to get more involved n the character and instrumental timbre of the music it could just be what the doctor ordered.