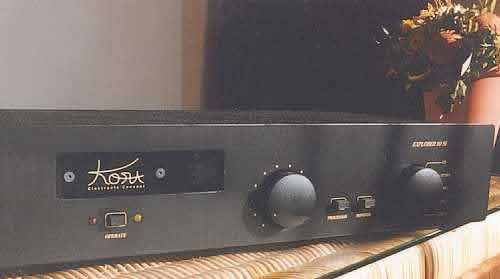 Kora is a relatively young and small company in Toulouse (that's France for the navigationally-challenged), that started originally in the aerospace business (small wonder, Toulouse is a mixture of Silicon Valley and Cape Canaveral-style companies), but later got into, erm, tube audio. Pure tube, and hybrid tube.

Tube hybrids. I can't let go of them. Over ten years ago, when I was a pennyless student, I lusted after the Luxman LV-103. This was a big and well-equipped e900 integrated amplifier with a tube voltage gain stage and MOSFET outputs. It was also one of the very first components to bring tubes again into the attention of the mainstream. While I never heard it, it had a very good reputation, and sure looked the part with its tubes displayed through a small window in an otherwise standard front panel. I wanted one, but I knew I could never afford one.

A few years ago it was the Copland CSA-14 that got my attention. Same architecture as the Luxman, clad in a very very very Cello-like box (meaning the high-end company, not the instrument). Desirable? You bet. I wanted to buy on the spot, but a home auditioning revealed that the Copland did not like the load of my Quad electrostatics: bone-dry, and disastrous with sibilance. Warmth? Polar, yes. Exit tube-hybrids for me.

And then landed, by sheer coincidence, a French vacuum-solid-stater in my system. One thing you'll notice when you encounter the Explorer for the very first time is that it is about as pretty as a 1980s Exposure amp. Oh, it does sport a very LV-103-like window for tube-watching, but that's where all similarities end. You get a big black heavy box with a few non-assorted knobs and buttons thrown in, as if no-one at Kora ever contemplated doing actual exterior design on this amp. I guess cost has to do with it, but if LFD do a reasonable job for the same money, and if Audio Analogue make outright gorgeous amplifiers for the same money... See what I mean?

One more salient detail: The French audiophile press already has declared this amplifier as the best French integrated in this price class, ever. But then again, what did you expect?

Back to business. The Explorer has six line inputs - including tape - offers NO optional phonoboard (a shame), but it has an AV-bypass mode, where the unit is converted into a power amp fed directly from AV-inputs. So it is perfectly feasible to have a siamese audio/AV system where the Kora plays the center of all things for music, and is slaved to an external processor for AV duties.
At the back we find a detachable IEC power cord, lots of gold-plated RCAs and four gold-plated binding posts of good quality for the two speakers. The Explorer has a stand-by mode, and comes on 3 minutes after activation, its status indicated with LEDs on the front panel.
The overall build quality is OK, but not more than that. For instance, two of the screws used to keep the lid on the amplifier did not fit properly. They did not before I started the dissection, and they did not after I spent some (not insignificant) time putting the thing back together.

During use the unit runs moderately warm. No problems to be expected here! Not that all was perfectly well: during listening I noticed a slight volume imbalance favouring the right channel. Perhaps Kora should pay more attention to tolerances, or else fit a balance control.

Looking through the window 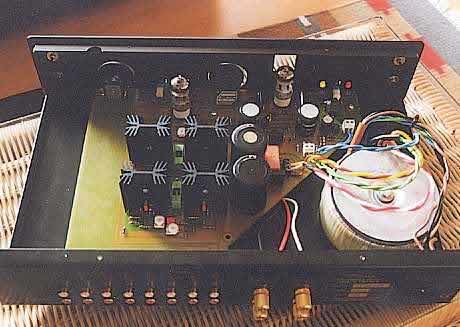 The main principle behind the Explorer's innards is simplicity. A first gain stage uses one ECC81 double-triode for both channels, and the actual power output stage contains another ECC81 and a mere 4 (MOS)FETs in a circuit that further only makes sparse use of passive components.
The output stage employs just 6dB of loop feedback. All in all this somewhat resembles the LFD approach of utter simplicity, which is promising for sound quality.

Sadly the power supply is a bit simple too. One 220VA toroidal transformer feeds only one rectifier and one set of 10000uF filter capacitors, shared by both channels.
In my experience (and thus with my Quad speakers), a dual mono power supply, or at least dual rectifiers and reservoir caps, leads to a more stable stereo image and a more solid sound. Luckily (and naturally) the power for the tubes is sourced from a separate winding and rectifier, and is even stabilised with a zener/MOSFET combination.

The impression of the electronics and components used is one of standard quality - a typical NAD power amp looks more impressive - but there are highlights such as the Alps Blue volume pot and an input selector switch from the same manufacturer.

Always scary business, connecting an amplifier to the old Quad ESLs. Especially when the amp's maximum power exceeds the safe limits for the venerable electrostat. But I've been lucky, so far. Again I got a test amp that drove the Quads without any problem, although the main reason for this are perhaps these twelve meters of 1.5mm^2 stranded copper cable I've got between the source of potential destruction and the panels. Who knows...

But driving ESLs properly at the electrical level is only half of the story: the other half plays at the musical level, and I'm glad to report that the Explorer rather liked the Quads.
In fact it made them sound neutral and natural, without the usual tube artefacts. I think four CDs are sufficient to characterise the Kora:

Mary Black sounded neutral-to-warm, sweet, fluid and natural from the lower midrange on. Below that, the bass was a bit soft, and the overall impression also was one of soft-focus. I.e. no sharply delineated images (but I ask you again: is reality always sharply in focus?), no knife-edge attacks. The music was feathery and loose, as opposed to the dry sound of high-feedback transistor designs.

Moving over to something with more grunt altogether, Dead Can Dance's Toward The Within live recording. The two first tracks are telltale, each for its own reasons.
The opening of the CD was wide, with a good rendering of the audience's applause, and again a clear yet sweet treble with a high amount of detail. This gets even more impressive when you learn how admirably 'right' the Explorer handles friction sounds, like S'es, the difficult solo voice of track two.
What track two misses, but track one has in abundance, are scale, dynamics, a whole band going for it. More or less the same for this amp: when the going gets tough, the Kora lacks a bit stability, sounds less than massive, a bit confused, as if everything could fall apart. (Now re-reading this makes it sound worse than it was, so don't worry too much).
When things got really loud, there was a slight tendency to hardness, which might induce fatigue. But, and I have to emphasize this, at this time I was playing louder than what I am used to. (Which also should say something, not?)

1000 Maniacs' Unplugged showed nicely audible percussion, and a round, full and fluffy bass. Drums had lots of impact (digging in my memory: better than the Argo/Quad, but not bettering the Orca/Quad, or, for the matter, the LP/Delphini/Argo/Quad combination), set in a deep soundstage. Instrument timbres were often very good, although there was also a slightly shut-in character, so that voices ended up lacking some presence.

The last record I discuss the sonics of here is An Pierle's Mud Stories, for the simple reason that only hours before I initiated listening to the Explorer I had experienced this music live, An sitting not five meters from me behind a Yamaha electric piano. Now the system had a lot of the feeling and energy of the real event, even, and again, playing at fairly high volume levels.

Rounding up things I found this Kora to have a nicely musical midrange and treble, married to a slightly loose and flat bass. The LFD Mistral components, for example, have a similar personality, but are bolder, perhaps a bit exaggerated, but more consistent altogether (at a 70% higher price, let's not forget).
My own Michell/Quad combo is more forward, brighter, but also more precise in the lower register (again, at a price). The Quad electrostatics' weird impedance was not a problem at all for this tube/MOSFET hybrid, although this of course says nothing about its ability to drive low impedances. (As usual, it would have led us too far to dig up the Magnepans as an alternative load.)

To me the Explorer constitutes somewhat of a problem. It sounds rather good for the money, is tonally sweet and natural, and although the bass and perhaps drive are lacking a bit, it puts down a performance I could easily live with. But build quality is only adequate, and its looks ...
Actually I can not really imagine anyone positively having a desire for this amplifier, although this may tell you more about me than about the Kora.

So I wonder what the product would be like with a little bit more effort, and with a price increase of e250 or so.
A prettier and more solid housing, perhaps. And a quasi-dual-mono power supply with an additional rectifier and filter capacitors. It would most certainly look and feel a lot better, while the sonics also could gain a bit.

Still, a cautious recommendation is in its place here, simply because you may find in the Explorer what you can't in like-priced solid-state integrated amps.