A triangular prism for music 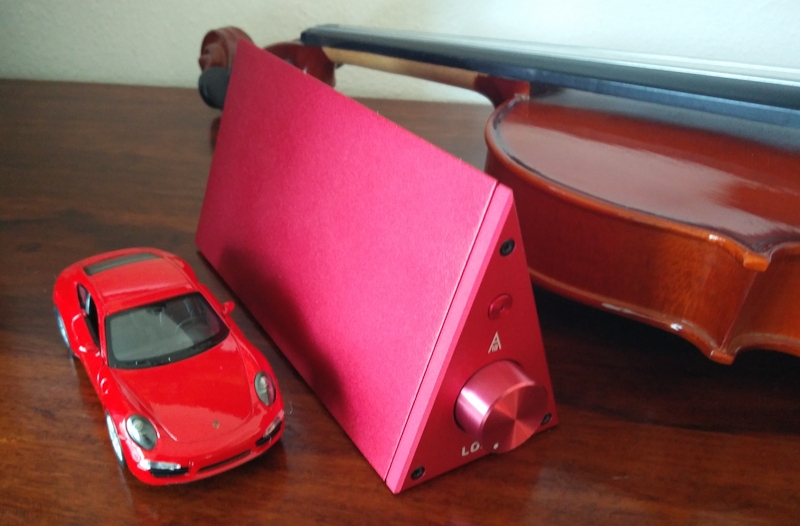 My quest for affordable integrated amplifiers is becoming a neverending story! After having a positive experience discovering and reviewing the Nobsound F900S amp in 2019, equipped with the ubiquitous TPA3116 chipset, the time had come for further exploration of the type.

Admittedly, the F900S wasn't exactly easy to use, with its tiny 3.5mm minijack line input! To add to that, it was so small and lightweight that even the thinnest cables could make it flip upside down!

Enter the Loxjie A10, another TPA3116-equipped integrated amplifier that is nicely built and designed. It is not exactly a newcomer, since it has been around since 2018. Its unusual triangular prismatic shape (and the possibility of having it in red, besides the usual black) makes it an irresistible eye-catcher. The weird and cool anodized aluminium body, especially in red, is something absolutely new and original.

It is as simple as an integrated amp can be: one line input (via good gold-plated RCA inputs!), a power-on switch and a volume control. That's all. No built-in DAC, no Bluetooth, no remote. The power supply is - as is typical - in an outboard unit. This is not the usual no-brand Chinese switching PSU, but something specially built for the purpose by Loxjie. It is a 19V/6A PSU with an anti-RFI ferrite ring on the umbilical cord. The speaker binding posts are small, but accept bananas, forks and bare wire.

Loxjie is a Chinese company, located in the HeJing industrial park of FuYong (Shenzhen) which specializes in originally designed DACs, headphone amplifiers (even with tubes!) and digital amplifiers. Founded in 2017, it is not the usual run of the mill Chinese company. A look at their (small) catalogue reveals extreme attention to detail, aesthetics and pursuit of good sound that is unusual in similar Far East brands. The A10 is the smallest amp in their catalogue, while the bigger A30 seems even more interesting, with built-in ESS ES9023 DAC and Infineon Merus MA12070 Class D technology. 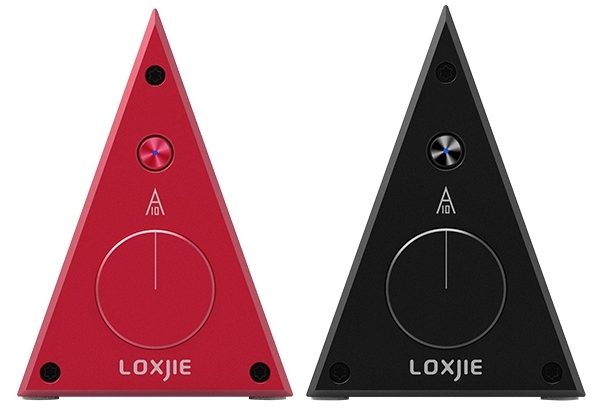 Loxjie A10 - inside view, clean and accurate layout

A triangular prism for music

The comparison tests have been performed against the Nobsound F900S, which shares the same Class D chipset. To make the comparison as objective as possible, the same external 19 volt/6A PSU has been used. Then, a beefer KTEC 24 volt PSU has been tested on both amps.

First of all, the heart of the A10 is the well-known TPA3116 chipset, and this is certainly something easily detectable by ear. Its sound is crisp, detailed and precise, with a good, controlled bass range and a clean mid-high range. More or less, the tonal balance is similar to that of the Nobsound F900S. After a careful comparison, though, the two amps sound differently in various areas. The bass range, for example, is less pronounced than that of the F900S. I'd rather say it is more controlled (compressed?) and less extended. It might sound strange, but the difference is audible, especially on full range loudspeakers. Surprisingly, the difference remains - albeit at a lesser level - even when using the small Lonpoo LP42 speakers, which could be the ideal partners for these inexpensive amps. This difference in bass performance seems less evident using the 24 volt PSU, but it is still there.

The mid-high range is similar, but the sound of the F900S is more fluid and has a sense of easiness that seems lacking on the A10 which, sometimes, sounds a bit compressed. This is probably due to the different harmonic content of the signal: it seems the F900S is harmonically richer, while the A10 tends to concentrate on the fundamentals.

Voices are quite similar, but they sound more natural and less electronic on the F900S. This is probably due to the different performance in the highest range of the spectrum, where the harmonics live: the sound seems drier on the A10. It is hard to understand why this happens, perhaps the passive components (caps?) which surround the TPA3116 chipset are of lower quality, considering everything else is the same (chipset and PSU).

The dynamic performance is mostly in the same league, and both amps can sound very loud (unbelievably loud, considering their size) and follow dynamic variations with ease. They can sound punchy when required, and certainly their sound is never boring nor slow. The rhythm of the music is preserved, though everything has to be considered in an appropriately smaller scale: for example, if you compare their dynamic performance to that of the ZeroZone power monoblocks there's no match, the ZeroZone's win hands down. Without a direct comparison - which is non-sense, considering the price and power difference - the A10 and the F900S can sound entertaining, punchy and lively. The fun factor, especially on rock tracks, is better on the F900S, though.

The soundstaging ability is on a par. Perhaps the focus of the 3D image is better defined on the Loxjie A10, but the difference is really subtle. On the other hand, the better bass performance of the F900S adds some air to the 3D stage.

Summarizing, I wasn't expecting such a result, having considered the A10 is better built, more expensive and offers less features (no DAC, no Bluetooth). Despite its cheap and flimsy construction, the F900S sounds globally better, bar none. Perhaps better passive components should be used on the A10, considering everything else is the same. I can't find another reason for such an audible difference in performance.

Manufacturing & finish. First of all, the A10 is extremely minimal: just one line input, no headphone output, no remote, no DAC, no Bluetooth. In a world of do-it-all integrated amplifiers this could be a problem, indeed. Secondly, because of the unusual triangular shape, the rear panel is way too crowded: if you're using bananas and thick interconnects, it could be a problem managing everything. Consider that the power-in socket is hidden between the speaker binding posts. Small fingers highly welcomed here.
Sound. Its performance is adequate to the price, but the harmonic content of the sound and the fun factor isn't on a par with the less expensive F900S. The A10 sound is more HiFi-sh than musical, if you know what I mean. The frequencies are all there, but the F900S makes music flow better, effortlessly and naturally. The background noise level is very low, definitely lower than that of the F900S.

The TPA3116 chipset can be powered even with 26 volt power supplies, but this Loxjie A10 is equipped with a 19 volt PSU. This means the chipset isn't performing at its best in terms of output power. A 24 volt PSU could be used, for getting some extra watts of power output and better bass performance. This might reduce reliability, especially when the amp is used under a severe load (i.e. hard to drive speakers) and at high listening levels.

It can be purchased almost anywhere, on the usual web stores. Loxjie has also an official Aliexpress shop but, strange as it might appear, the selling price of the A10 is higher there than on Amazon or Ebay.

Its coolness factor makes it a winner, though in terms of pure sound quality (and quality/price ratio) the Nobsound F900S performs better, in almost any area. On the other hand, the A10 is better built, more silent and easier to use.