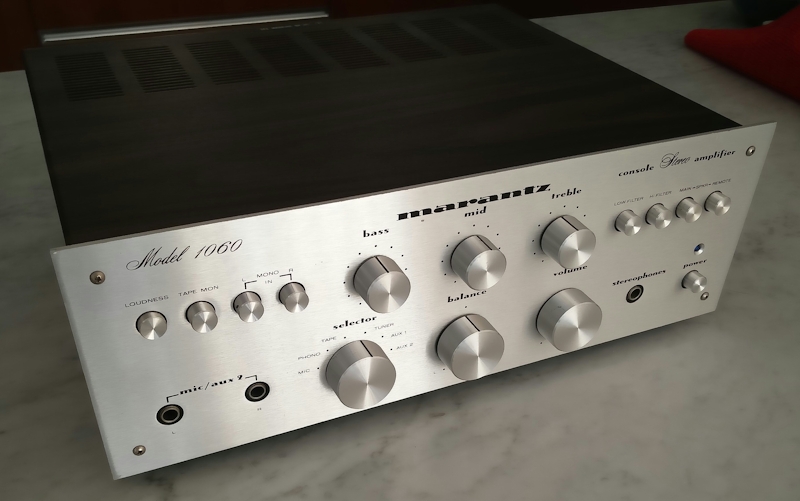 In 1968, Superscope Inc. acquired the Marantz company from its founder Saul B. Marantz, who finally retired as president four years later. From this acquisition Superscope developed and marketed Marantz high-fidelity audio products, and began the global distribution of stereo amplifiers, receivers, and record players under the Marantz name. During the Seventies, Superscope pursued a strategy of marketing Marantz as a top brand for serious audiophiles, and Superscope as a more budget-oriented line of stereo music systems and products, that were labelled as “made by Marantz.”

After a successful and legendary series of tube amplifiers and preamplifiers Marantz released a series of solid-state integrated amlifiers. The first was the 1200, a 100+100 watt integrated amp. Next year the 1120 model was introduced and in 1973 the more affordable 1030 and 1060 were ready to conquer the market. These two smaller amplifiers were still designed in Sun Valley, CA (USA), but manufactured in Japan, by Marantz Japan Inc. (formerly Standard Radio Corp.). The last two digits of the model name indicated the total of the power output on 2 channels. This means that the 1030 was a diminutive 15+15 watter, and the 1060 a 30+30 watt amplifier. Its production ended in 1977 (replaced by the 1070).

For various reasons, the 1060 has earned an almost legendary status. It was not the top of the line, but still a highly desirable amplifier, with lots of features and very good specs (and sound) for that era. 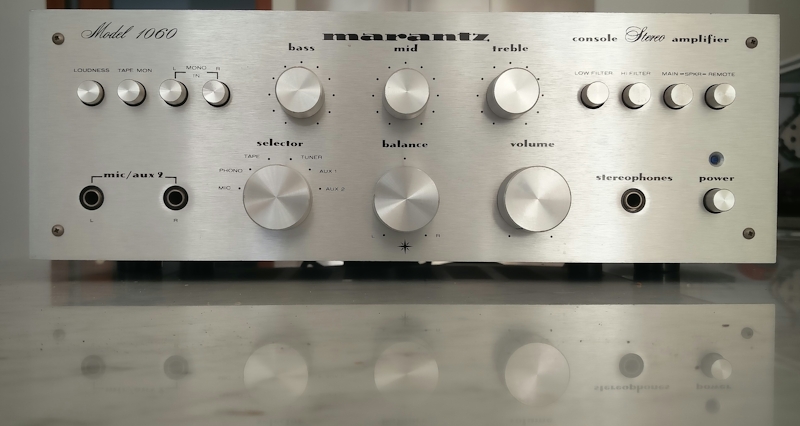 The 1060 is a capacitor-coupled amp, with a single rail power supply (with Elna caps), a solution that was widely used in early solid-state amplifiers, but then abandoned by mid-70s. The function of the output coupling capacitors is to keep the DC voltage from reaching the speakers. Its bigger brother, the 1120, uses a more modern solution, called OCL or direct-coupling. An OCL (Output Capacitor-Less) amplifier is any audio amplifier with direct-coupled capacitorless output. Such a kind of amp has a higher linearity, better bass extension, less distortion at low frequencies and a larger output power at very low frequencies and DC. In any case, the 1060 was capable of delivering 30 watts per channel (actually something more) both on 8 and 4 Ω loads. At that time, those were respectable power output figures.

The tone control section has quite uncommon controls for bass (@50Hz), treble (@15kHz) and mid (@700Hz). The protection circuit is an ASO (Area of Safe Operation) detection type, so the amplifier is pretty reliable even if something goes severely wrong (e.g. short-circuited output). Moreover, according to the Marantz standard, it is designed so that no oscillation occours even when a 10uF capacitor is loaded on the output. The power stage makes use of four Hitachi/Marantz 2SC897D transistors (they can be replaced with NTE 280). The standard bias, recommended by the service manual, is ~7.5mV.


The 1060 is pretty rich in features: besides the triple tone controls, you have high (@3.5kHz) and low (@100Hz) 6dB/octave filters, a loudness switch, a mono selector, a front mic input, two pairs of speaker outputs, a pre out/main in pair of connectors (normally bridged), 3 line level inputs plus a front AUX in, a standard phono MM input and a headphones output. If you're lucky, since it is a rare bird, you can find a 1060 with the cool and optional WC-10 walnut veneer cabinet.

Switching the amp on produces the usual THUMP on the speakers, a fact that can't be avoided. In order to minimize its annoying effect, try powering the amp on and then waiting 10-15 seconds before pressing the speakers switch. In case of need, a copy of the service manual can be found here, while a copy of the owner's manual can be downloaded here (thanks to HiFiEngine).

I'm no great fan of vintage amplifiers, as they normally sound slow and muddled. The Marantz 1060, though not sounding modern can still deliver pretty nice tunes. First of all, it is very quiet, its background noise level is very low, considering its age. This allows for a notable performance in the dynamics department, as long as the 30 watts per channel suffice. It can drive even difficult loads, a quite uncommon feature for the amps of that era. The tonal balance tends to a warm sound, with good bass, slightly forward mids and rolled-off highs. The mid range - voices and strings in particular - is clear but never aggressive, just a bit forward especially on female voices. Certainly the harmonic content lacks the spark of modern amplifiers. The level of transparency and detail is good, though any decent (even inexpensive) modern Class D integrated amplifier can sound much more precise and introspective. The bass range lacks a bit of modulation and presence in the first octave, and for this reason it might sound a bit thin, sometimes. Do not expect it to sound modern by any means: it offers that velvet touch that you might be searching for, if you're a fan of the sound of those old days. Certainly, it sounds better than many Japanese designs of the same era.

Compared head to head to a NAD 3120, the king of budget amps in the Eighties, the 1060 offers a smaller sound and sounstage and, of course, can't rival the punch, dynamics and bass slam of the 3120. Yes, the 3120 sounds globally better, but the 1060 performance is still highly enjoyable to my ears.

Is its fame well deserved? I'd say yes, it is an amplifier that can sound gracefully enjoyable even by today standards, as long as you know what to expect. It is fun to use, and damn cool looking, especially in its WC-10 wooden case. Will it put a decent, modern audiophile amp into shame? Definitely not, but that shouldn't be the reason why you buy it. Once the 1060 was the heart of the usual HiFi system Thorens turntable + Marantz amp + AR loudspeakers, hence it might still play its role, if you're after such a classic vintage combo. Otherwise, it could be a nice toy to play with from time to time.

Many 1060's have been sold in the Seventies and, being pretty solid and reliable, there are many of them still around, so availability is not a main concern. Second-hand market prices are slowly rising, because of the increasing interest for vintage gear. I've seen good 1060's selling for something like 200€/$, but I've also seen someone asking 1000/1200€/$ for a completely restored unit.

Being an amplifier of fifty years ago (mine has been manufactured on Nov. 1, 1973), power supply caps should be replaced if the sound is too slow and muffled. My 1060 has been with me for decades, rarely used, so it still works just fine and it has never been recapped. Just use some deoxidizing spray on contacts, pots, selectors and connectors from time to time and it will sound just fine.

On the web you will find detailed complete restoring sessions, with new, modern components installed in place of the original ones. Be careful, because these mods do change the sound of the amplifier (not always for the better) and, in the end, it might sound too modern. If you wish to preserve its vintage sound, just leave it as is, if it works fine. Moreover, a complete overhaul procedure will alter (destroy?) its second-hand collectors value, since the amp is no longer original. It is a resto-mod, like those done to vintage cars. It might be your cup of tea, but definitely it is not mine. 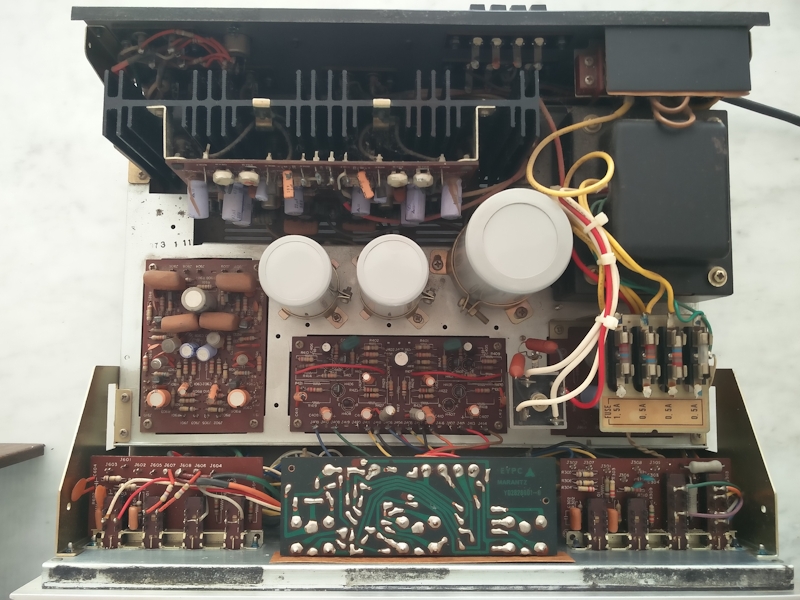 The Marantz 1060 is a very nice vintage amplifier that sounds, well, vintage, as you might expect. It was a must in its days, and it's still a must if you're after a complete vintage system.