The NAD 3140 is often referred to be the 3020's “bigger brother”. Actually, these two amps have just the preamp section in common (a 1020, more or less) but everything else is quite different. Introduced slightly after the 3020, the 3140 was an ambitious design, with unique features at the time. Its power section was available as a separate power amplifier, under the 2140 name. It has been the first amp in audio history to use a Bass EQ circuit, aimed at extending bass frequency response of small loudspeakers. Unfortunately, it has not been as highly praised as the smaller 3020, though it certainly deserved much, much more attention. The 3140 and the 2140 won the Grand Prix AudioVideo Awards in 1981.

The 3140 is a rather complex design, especially if compared to the 3020 or the 3120. First of all, it is rated at 40 watts per channel (on a 8 ohm load) but - as usual with NAD amplifiers - its real power output and dynamic headroom make it comparable to 80/100 watt per channel traditional amps. The beefy PSU makes use of two separate power transformers and these give the power stage enough energy to put out more than 100 watts per channel on a 2 ohm load (RMS) and more than 200 watts on a 20ms peaks, still @ 2 ohm. Hence, do not consider the 3140 as a 40 watt per channel amplifier, because its dynamic headroom is simply huge and will put any standard 40 watter to shame quite easily.

Massive power output aside, this amplifier is plenty on unusual features. First of all, it can be bridged and used in mono (like the 2140 power amp). Then it offers the unique “Bass EQ” feature, which adds a +12dB boost at 45 and 70 Hz, thus extending the bass range of small speakers by an octave. This boost would draw all the energy available of any standard amplifier (leading it to clipping), but the 3140 has enough power reserve to deal with this requirement quite easily.

The 3140 has an infrasonic filter (12 dB/oct below 15 Hz, always in conjunction with the bass eq), a mono switch, the loudness filter and a bizarre “low level mode” that drops the amplifier gain by 20 dB, for quieter listening sessions, at night, for example. There's also a rear switch that activates the usual NAD soft-clipping circuit and the uncommon SLC circuit, aimed to compensate the impedance of different speaker cables. SLC stands for “speaker-lead compensator”, indeed, and is intended to compensate the effects of excessively long (or high-resistance) speaker cables. LED power outputs indicate how many watts the 3140 is pumping into your speakers (red zone is at 100 watts).

If this doesn't seem enough, add two phono inputs with adjustable capacitance (100, 200, or 320 pF on PHONO 2, a +10dB higher gain for high-output MC cartridges on PHONO 1), two tape deck loops (even with DIN connectors), and preamp/power amp bridged input/output. And there's two of these, one marked NORMAL (with frequency response limited to 15-35,000 Hz) and one marked LAB, which extends the bandwidth to 10-70,000 Hz. Claimed damping factor is 100.

It is a rather heavy amp, for being rated at just 40 watt: slightly less than 8 kg (17 lbs). It was available both in silver and the NADish dark grey/black finish. 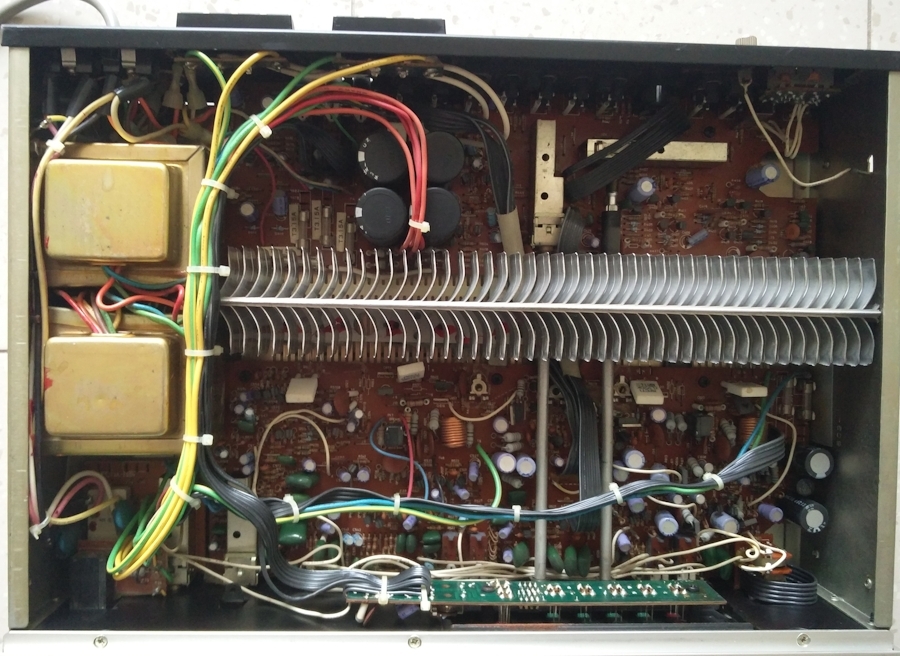 The 3140 is a stunning amplifier, considering its age and the conservative power rating. Its sounds big, powerful and extremely dynamic. On the other hand, it never sounds aggressive or harsh, while the high range tends to sound rather warm. Not the ultimate in high range refinement and detail retrieval, but harmonically the sound texture is rather complete.

The bass range is vigorous, heavy, punchy and certainly makes this amp sound “bigger” than one might expect. The bass response extends quite well down to the first octave, though while reproducing complex and highly energetic tracks it lacks a bit of articulation. Moreover, it tends to slow down a little bit and the sound is dynamic, but never aggressive. It has punch in spades, but it is not that kind of in your face dynamic impact.

Its power reserve is impressive, but when pushed hard (very hard) it tends to compress dynamics and add traces of confusion here and there. This happens, however, in a territory where standard 40 watt amplifiers have already reached wild clipping and intolerable distortion levels.

Though this was not a must in the Eighties, the 3140 is a rather capable performer even in terms of soundstaging. Width and depth of the image are very good, while height could have been better. The stage extends well behind the loudspeakers, which tend to disappear. Instruments and singers' contours are stable and well focused, even at loud listening levels.

It is an amplifier that invites you to enjoy your music for hours and hours, without listening fatigue. Perhaps not the ultimate in detail retrieval (modern Class D amps can do better in this area) but it gets the job done nicely. It feels at home with any musical genre, be it classical or pop/rock/jazz, its generous heart will make any kind of music sound lively and entertaining, effortlessly.

How does it compare to the 3020/3120, you might ask. I've compared it to a standard 3020 and to a 3120 which belong to my vintage collection. Well, the family feeling is there, but the difference in power output and dynamics is stunningly clear. Is it a 3120 on stereoids? Yes and no. The 3120 has a grace and a musical touch that can't be found in the 3140. On the other hand, the 3120 hasn't the energy, the control, the punch and the bass range of its bigger brother.

Not much to complain, but the crowded, almost chaotic front panel and the unusual features might be mind puzzling for modern audiophiles used to minimalist amplifiers. In any case, all the bells and whistles can be discarded and you can just use it as a “wire with gain”. Certainly, the 3120 looks neater and - dare I say it - less Japanese. Spring-clip speaker terminals are ugly and a pain in the neck with modern cables or connectors...but what would you expect from an amp this old?

When pushed hard it becomes quite hot, but thermal protections are there to avoid damage to the circuits. Moreover, DC supply fuses will blow if excessive load currents are drawn, while the usual power-line fuse protects the amp in the event of internal failure.
Considering its age, a recap might be necessary. As far as I know, the unit I've tested had been serviced by the previous owner. As usual, considering the age, some deoxidizing spray on the input selectors, volume pot and power supply fuse contacts is almost mandatory.

This amplifier isn't impossible to find. Prices range from 150 to 250€, depending on condition. Of course, check that the unit hasn't been modified. Recent recap is a big plus that can push the price higher.

If you love the 3020 and the 3120 you MUST listen to this 3140. It is not as musical as those little gems, but it can drive virtually anything. Moreover, it is entertaining, not fatiguing and extremely reliable. It certainly deserved much more popularity!