Forget Where It's Built 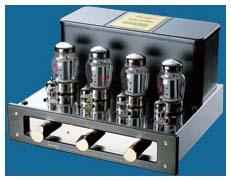 Recently, I received an email from Frank Stuppel. His name will be familiar to owners of Heart CD players in the U.S.: he is the distributor for the line in this country. It seems that while attending the Consumer Electronics Show, he was smitten by a line of tubed electronics from China. By the end of the show, he had reached an agreement to become the American distributor. His excitement of his discovery came through the email, and I accepted his offer of a review sample.

From information culled from Nelson Audio's website, I learned that Nelson Audio imports both high end audio components, as well as high quality raw parts, such as capacitors and tubes, to China from locations worldwide. There is not much more information about the company or Mr. Nelson for those who do not read Chinese.

I awaited arrival of the Image 66i with a combination of anticipation and dread. Yes, you read that properly, dread. You see, I haven't been fond of any of the Chinese tubes that I have had experience with to date, and I naturally expected the amp to be fitted with more of the same. You can imagine my surprise and delight when I saw a quad of Sovtek KT-66 output tubes and a pair each of JJ 12AX7 preamp and 12AT7 driver tubes fitted in the amp. Not a Chinese tube in sight, hooray!

The Image 66i is rated at 30 watts per channel, and clearly follows the minimalist approach: there are three controls on the chromed front panel, power, volume, and input selection. In other words, all one really needs, and nothing that one doesn't. It is supplied with a gloss black tube cage. Around back, there are four pairs of high quality gold plated U.S. made CMC input jacks, as well as equally high quality speaker binding posts.

On the top panel, there are very nice ceramic tube sockets, which hold the tubes so well that the tubes are shipped in place. When tube replacement time arrives, it is clearly marked what goes where. The Image 66i is supplied with a gloss black tube cage that fits securely into sockets on the top panel. The designer showed a bit of imagination here, as the sockets that hold the tube cage securely in place serve double duty as the negative posts for a digital multimeter used to bias the output tubes.

Speaking of tube biasing, the bias for the KT-66 output tubes is specified at 550 mV. This seems quite high to me. In comparison, my JoLida JD-502B specifies the bias setting at 50 mV. While I realize that the two amps have different circuitry and output tubes, a difference of 11 times does seem quite substantial. During the review period, the Image 66i was totally reliable, but I did note that the output tubes emit a blue glow during use. Initially, I thought the tubes were gassy, so I asked Frank about it, and he saw the same thing. My guess here is that the amp is biased high to get every last watt out of the circuit, and that the high bias causes the blue glow. Again, the amp performed flawlessly, but if I were to buy one, I would plan to replace the output tubes annually. This really isn't a big deal; I've seen matched pairs of quality KT-66 tubes available on numerous web sites for $45 or so. Surprisingly, the amp runs cool for a tube amp; my JoLida runs far hotter.

Inside the amp, there isn't a printed circuit board in sight; the dual mono Image 66i is hand built and wired point to point. It's obvious that the amp was built with extreme care.

The underside of the amp is fitted with "Tiptoe" clones, to reduce vibration within the chassis, as well as the tubes. Supplied are a set of metal discs which fit under the points to protect the furniture underneath the amp from scratches.

The front panel did have a curiosity: there is a misspelling on the amp. It says it is a Vacuum Tube Intergrated Amplifier Model 66i. I've been told this will be rectified in future production. 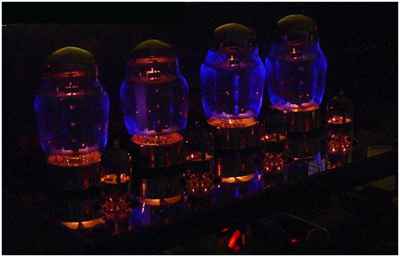 I've never met nor talked to Mr. Nelson of Nelson Audio. It would be an exercise in futility: Mr. Nelson speaks no English, I speak no Chinese. Nevertheless, I think I know what type of music he enjoys: acoustic or possibly classical music. I don't think this is a stab in the dark at all. The Image 66i handles acoustic music with such aplomb and finesse it's as if the amp was designed specifically to play it.

This is my first experience with a KT-66 based amplifier. The KT-66, at least in this amp, doesn't sound like a lower powered version of the KT-88, which, to my ears, is one of the most balanced tubes, frequency wise, that I have heard. The KT-66 is basically a guitar amp tube, very similar to the 6L6. Frank said not to think of the tube as a small KT-88, but more like a high powered 300B or 2A3. This makes perfect sense to me, as those tubes aren't known for bass slam or control, but rather for tonal beauty especially in the midrange.

I've often felt that if a component gets the midrange frequencies right, I can live with deficiencies elsewhere. After all, the midrange is where the "meat" of the music lies. You heard it here first: the Image 66i gets the midrange right, very right. Both male and female vocalists, on even commercial quality discs, can actually cause goose bumps. I'm being completely serious. The stand up bass on bluegrass or jazz recordings sound exactly as it should, you can actually hear the wood of the instrument. Many components mask the stand up bass so it can't be differentiated between its electric cousins.

Treble frequencies have a shiny, shimmering quality. Cymbals sound as close to "live" as I've heard. The Image 66i can draw out the beauty on cymbals that are buried back in the mix.

While the Image 66i is a very revealing amplifier, it isn't analytical or fatiguing in the least. I know I'm on to something good when I choose music over sleep, and I definitely lost sleep with the Image 66i in my system

Bass reproduction was hit or miss with the Image 66i. Sometimes quantity was perfect, sometimes not. It really comes down to the recording. With the speakers that I can imagine likely to be driven by the Image 66i, this really shouldn't be a problem; many will start to roll off at 50 or even 60 Hz. The bass quality is great, as long as bass slam isn't necessary. Again, it's about finesse. This amp seems to be able to cut through the effects of the instrument being played and delve into the heart of the instrument itself. On some recordings, bass reproduction takes on an almost eerie, ethereal, phantom like quality, floating outside, between and around the speakers, instead of assaulting the room with its presence. The Image 66i never assaults; it's far too dignified for that.

It may be just a bit too transparent for rock and roll, at least hard rock. The Beatles, The Stones, The Grateful Dead are handled with ease. Throw on some Hendrix, however, and the limitations come out. The music just becomes far too grungy, metallic, and downright nasty for me to enjoy. Maybe it's the recording, maybe it's the transparency of the amp, but for whatever reason, it didn't work for me.

I feel the amplifier is named aptly as it throws a big soundstage and images like nobody's business.

The Image 66i sounds like a much more powerful amp than its 30 watt rating would suggest. I would have guessed 50 watts per channel. 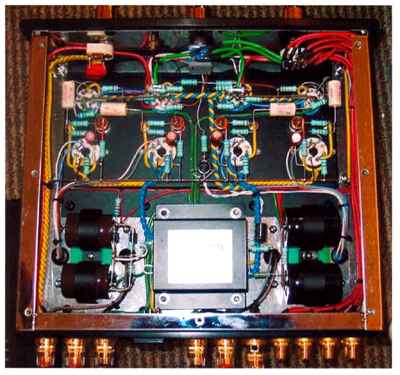 In comparison to my own JoLida JD-502B, the Nelson Audio Image 66i is far more transparent and open. Quality of construction isn't even close; the Image 66i gets the nod here as well. On the other hand, at regular price, the JoLida has the advantage. (With the limited time introductory pricing on the Image 66i, the amps are priced within $50 of each other.)

Like all things audio, it comes down to priorities and musical tastes. For acoustic or classical music, the Nelson Audio is my runaway favorite. But, I listen to all kinds of music, not just acoustic music, and I sometimes like to play loud. The JoLida has more power (60 watts per channel) as well as more robust bass, a necessity for hard rock.

As far as sound quality, there is not much to report here. Deep bass frequencies on non reference recordings can be a bit reticent at times, but for acoustic or chamber music, this won't be an issue. Likewise this won't really be an issue when mated to a pair of good stand mounted bookshelf speakers, which is what I envision as a perfect match for the Image 66i.

My next observance isn't solely directed at the Image 66i. Many amps on the market place the IEC power inlet in the center of the rear panel. This makes perfect sense for placement of components and wiring internally, but it may lead to hum problems if an unshielded interconnect cable were to cross the mains cable. For this reason, I do not recommend use of unshielded interconnects with the Image 66i.

Initially, I had a bit of a quandary with the Image 66i when it came to determining value. After all, aren't Chinese components supposed to be, well, cheap? Value priced? Inexpensive? This 30 watt per channel tube amp from China at $1499 isn't cheap, but it does have value. First, one must remember that this amp is chock full of premium parts and high quality tubes. Even more than that, however is the high level of construction. Let's not forget the excellent music this little jewel makes. If the amp, as is, had a "Made in the USA" plate on it, I have no reservation in saying this amp would fly off of dealers' shelvesat $2500. It's that good.

Obviously, I'm quite taken with the Nelson Audio Image 66i Intergrated.err, Integrated Amp. What makes it so special? Is it the high quality internal parts, the circuit design, the point to point wiring, or possibly, the KT-66 output tubes? Possibly, it's a synergy of all of those that gives the amp the ability to portray the ever important midrange frequencies with an almost magical quality. Does it really matter? It does to me. The Image 66i has piqued my curiosity. Keep an eye on this space for more value priced hand crafted tube gear.

I would like to thank Frank Stuppel, not only for providing the review sample, but for supplying the pictures used in the review.