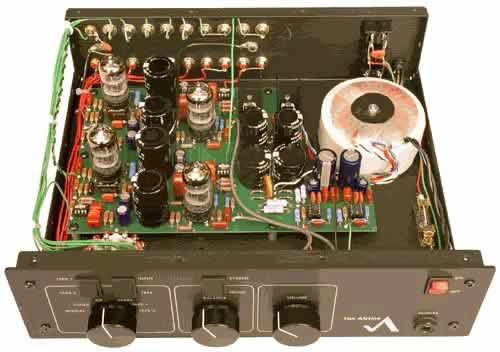 Some months ago, I reported my findings on the assembly and use of Audio by Van Alstine's Super PAS 3 preamplifier, which is a total rebuild of the old Dynaco PAS preamplifier.
I will not bore you with a reprise of the review here, but instead refer you to the original review for more details of that project. I will, however, recap my summary of that review, because it directly pertains to the Audio by Van Alstine Super PAS 4iSL currently under scrutiny.

I made that recommendation because Audio by Van Alstine markets reasonably priced preamplifiers of their own design, which cost precious little over the cost of acquiring an old Dynaco preamp, the AVA kit, and a new set of tubes. Additionally, the AVA designs sport better power supply sections and much more flexibility, not to mention modern styling.
Because the AVA designed preamplifiers have their own chassis, instead of a recycled Dynaco chassis, AVA was able to design the circuits from scratch, instead of making compromises to re-use an old chassis. Big plus.

The Super PAS 4iSL is a hybrid preamplifier; it uses both vacuum tube and solid state technology. The power supply circuit is solid state. There is a big advantage here: sound quality of the preamplifier will not change over time as it can with a preamplifier utilizing a rectifier tube.
The phono and line sections use 12AX7 tubes and op amps in harmony. The vacuum tubes handle voltage (upwards of 200V) while the op amps handle the current duties. This arrangement makes perfect sense.
Vacuum tubes are great devices for handling voltage, but aren't great at generating current.
Op amps, on the other hand, handle current just fine, but if they were to "see" 200 volts, would fry instantly. Each channel of each section (phono and line) has 1 12AX7 and 1 op amp.

Additionally, the Super PAS 4iSL has it's own independent headphone amp, sharing only the toroidal transformer with the other circuits in the preamplifier.

I have already alluded to the flexibility of the Super PAS 4iSL. To be specific, it has 1 phono input, 3 line level inputs, 2 tape monitor loops, and 2 pairs of preamp out jacks. All of the jacks are gold plated. The back panel also has 3 switched AC convenience outlets.

The front panel has 3 rotary knobs for input selection, balance and volume. At the top edge of the front panel, there are several 2 position flip switches covering tape monitor duties as well as stereo/mono selection. On the far right, there is a lighted power switch, with the headphone jack residing just below.

The first thing I noticed upon unpacking the box was the quality of the chassis; it is very sturdy and attractive. Additionally, the top plate fits onto the chassis with a precision that I am unaccustomed to in components in this price range, much less a kit.
AVA had also taken the time to match the tubes and mark them for use in either the line or phono sections of the preamplifier.

The rest of the parts , except the transformer, were of the same variety used in the Super PAS 3 preamplifier: nothing "esoteric", just high quality parts, selected not for some kind of "magic" quality, rather selected sensibly for high performance and reliability for use in their respective circuits.

Assembly went pretty well, except that I was rather uneasy about the possibility of solder bridges while installing the sockets for the op amps. I feel the solder supplied by AVA to be too large in diameter.
Instead, I had on hand some Radio Shack solder which was much smaller in diameter, and I used it instead to install the IC sockets. I checked for continuity between pins afterward with an Ohmmeter, and found none. I would prefer that AVA supply higher gauge solder for this application.

After a few nights of work (which I found to be enjoyable), I packed the unit and shipped it to AVA for the free checkout that is offered with every kit. It seems that I did have some solder bridges elsewhere on the PC board (where is that thin solder???), and some of my input/output jacks weren't tight. All was put right by AVA, and the preamp was returned to me for use.

After living with the Super PAS 3 for some months, I expected the Super PAS 4iSL to have a similar sonic signature, only "better". Initially, I was quite disappointed. In fact, the preamplifier sat while I wrote other reviews.

It's strengths lie in three areas: bass extention, soundstaging and clarity. Bass extention was a big surprise, as this was a major weakness of the Super PAS 3. This preamp goes deep!
The bass however, wasn't the kind of "all over" bass heaviness or "warmth" that tube lovers rave about. It was actually just an extention of the music, as it should be, smooth and articulate, complimenting the upper ranges, but never interfering or overpowering.
I would characterize the overall tonal balance as neither "warm, nor "cool, but instead feel totally confident branding this preamplifier as "neutral".
As far as the soundstage, it was a delight discovering how much ambience or "room" could be discovered in much loved recordings that I had listened to for years.
It was as if I had stepped one closer to the original recording. Clarity I believe was actually tied to the soundstaging ability of the Super PAS 4iSL; I believe that because the preamplifier does not seem to "gloss over" or "beautify" the incoming signal, that clarity is greatly improved as well.
This is not to say that the sound is harsh or analytical, because it is not. It is a very musical preamplifier, that actually does nothing to call any attention to itself, as I feel it should be.

In my opinion, the unit has one major weakness: it could use a bit more gain in the phono section. It seemed to me that with my Rega Planar 2/Rega Bias setup, that I had to turn the volume control up much farther than when using any of the line inputs.
This wasn't so much of a problem with the Rega Bias cartridge, which is a high output MM design. What I question is how suitable the phono stage would be with a high output MC design, most of which have approximately one half the output voltage of the Rega Bias.

If you are in the market for a high quality, very flexible, and great sounding preamplifier, the Super PAS 4iSL deserves your consideration. Mine is here to stay for the foreseeable future.