Pioneer is an old Japanese company which hardly requires an introduction, I think all of us must have heard about them and have come in touch with their products at one time or another. Lately, Pioneer has redesigned even their badge, not to mention their product line, and has started offering some potentially interesting products.
They seem to intend to offer semi-audiophile features at just a cut above typical commercial prices, a very distant goal few have managed to achieve. Their "Precision" series is doing well, but this time, we look at their standard offers in the mediuam power market.

It offers tone controls, acting at 100Hz/10kHz with +/- 8 dB, but they can be bypassed using the "Direct" switch. There's also a muting switch which will reduce overall levels by -20 dB (i.e. to 1/10th). Two speaker pairs are catered for, both using front panel press buttons, which will activate or deactivate speaker relays; thus, the relays are used for both protection and switching, a practice much better than running high power wires to and fro inside the amp.

The case measures 420x128x335 mm (WxHxD), and weight is given as an even 7 kilos; not much, but then, we have a toroidal power transformer inside, which always weighs less than an equivalent frame transformer.

On the back, you'll find gold plated RCA Cinch input and output plugs, some decent but not spectacular speaker binding posts, and two switched and one unswitched power sockets, for your other equipment, with a total power consumption of 200W - very generous, twice what is typically offered. However, you'll also find a relatively flimsy power chord socket, not an IEC socket, which uses a totally unexciting power chord - somewhat of a letdown.

On the front, you'll find all the usual switches and commands, however including a headphone output socket, now banished from most "audiophile" equipment, and a remote control sensor. The remote control is a rather crude unit, managing to be crammed, illegible and rudimentary all in one. However, it will allow you to select inputs and change volume, in addition to turning the unit on and off from and to its standby model.

There are also numerous LEDs to indicate current status - fortunately, their inclusion seems to have been dictated by reason and logic rather than show, and they are useful for at-a-glance check of the status. Oh yes, and there's a loudness button, for those hard of hearing who need it.

Overall, the appearance seems neat and tidy to me, even if it's hardly pretty or with any special taste - at least it's not garish like some.

Pioneer A-607R takes about half an hour to reach its operating temperature. During that time, it will progress from somewhat sharp and brittle to more mellow and slightly hazy.

You will hear most of what is on the recording, but while all there, the sound stage will appear to be almost covered in a light mist. It's not unpleasant as such, it just shouldn't be there. It won't tire you, but you will always know that there is something between you and the music. In many ways, its sound reminds me of the very popular photographic effect from the early seventies, started by David Bailey, who used to wrap a nylon stocking over his camera lens (I don't know what he did with the owner of that stocking). Depending on the colour of the stocking, the entire scene would acquire a similar hue.

As we have come to expect from MOSFET output stages, the high range is better in quality than with typical transistor designs, though it does not have the tube-like rounded and mellow sound. It has the control and definition of solid state, but it all seems somewhat distant, away from us, heard from a distance.

The same is true of the midrange. It's there, it's fairly well defined, it has detail though not too much so, but it seems to come from a distance away. Not cold, not unpleasant, just removed from us.

The bass lines are, I would say, typically MOSFET-like. While I honestly cannot say the A-607R does not have bass lines, they are much softer than expected, and indeed, than they are in real life. They are fast, no doubt, but lack the sheer weight, the gusto needed to give the backbone to the music. As if the amp is afraid to let go, and is holding back.

The left to right image is all right, but the front to back image is rather lacking in any realistic substance. It would seem as if the sound stage is no more than one or two meters deep, and that's it. A dissapointing performance.

On the small, economy class JBL Control Monitor CM62 speaker pair, the A-607R did a fair job of extracting what these speakers are capable of, though others have done considerably better. Their tendency to be somewhat unruly nicely complemented the Pioneer, and together they made some nice music - nice, not even good, but very listenable.

On the floorstanding JBL Ti600 pair, the Pioneer sounded reasonable, just about what one would expect of a mainstream product. Pushing it, on the relatively easy to drive Ti600 speakers, the Pioneer managed to keep up with the speakers in terms of volume, but its shortcomings were then highligthed. The misty aspect of its sound was easy to detect, and detracted from making the music believable. You just knew it was a recording and no more than that. Even when fed the signal from my H/K HD730, which is somewhat dark in character, but very substental and dynamic, the Pioneer maintained its own view of the music. Due to Ti600's relatively good efficiency of 91dB/1W/1m, the music got unpleasantly loud before the Pioneer began to reach any measure of distress.

However, changing for the recently rebuilt AR94 speakers, which are not very kind to amps, demonstrated that on louder playing the Pioneer could be stressed. It couldn't reproduce powerful transients without signs of compression if the average volume was turned up to loud, in room terms (i.e. not too loud, but approximately as loud as you would hear it in a live performance say 2 meters away from the band, and I don't mean an amplified rock band). There was also a slight loss of detail, but this was not as troublesome as the feeling of compression, a feeling that the amp was struggling to get the job done.

For example, the bass lines which are usually as decisive as thunder when the ARs are driven by Harman/Kardon HK680 came across as significantly softened, less substantial using the Pioneer. Energy and drive was clearly missing, and while not terrible, this did rob the music of a part of its character.

The midrange holds up very nicely even under stress, and the treble showed only moderate changes when the amp was pushed. Given the price of this unit, these could be forgiven as a part of the cost-cutting scheme.

To be fair, never once did I have the feeling that any of the speakers were under less than solid control; it didn't seem to me as if the amp was loosing its grip, even if it lost its breath.

Pioneer's A-607R is a relatively high tech product (for a mainstream product line, that is), one of few Japanese amps which use toroidal transformers (though newer Sony models use them as well), and one which uses first class components in its power supply. All this would have led me to expect a very substantial bass performance with a doubtful mid and treble range, but it turned out to be exactly the opposite. The midrange is quite good, though there are cheaper products out there with just as good - if not marginally better - midrange performance (e.g. Yamaha AX592). The treble is clean and without any obvious faults, yet it is somehow unexciting, it leaves you untouched and with a definite feeling that all this is just a so-so recording.

The bass lines lack the drive and energy required to be convincing, and this creates a subjective impression that the mid and high range lead the bass, instead of the other way around. The overall effect is not displeasing, but to all who listen to live music, it will be immediately obvious that this is a synthetic effect. Thus, it is at its best with synthetizer music, the highly electronic music, but is out of its depth with classic forms, such as chamber music, symphonic, folk and generally melodic music using classic instruments.

I cannot say this is a bad product, but in my book, it comes in just above the lower borderline of Hi-Fi. It lives in a dangerous neighbourhood, where many other contenders struggle to win our attention - for example, to my mind, despite certain performance fall-offs at extremes, the Yamaha AX592 is a better, more musical amp for less money.

So, unless you are a devoted Pioneer fan, steer clear of this one, it's below what we expect of this company and for its price, even if it is not really bad. But then, it isn't too good, either.

Inside, the A-607R uses a toroidal power transformer; as there are no markings on it, and I didn't have a circuit diagram, offhand I'd rate it at 300-400VA. Either way, it's a generous value. This is followed by a bridge rectifier serving both channels, mounted on a separate smaller aluminium profile heat sink. Next come two Elna For Audio Series blue filter capacitors, each rated at 15,000uF/50V. There are also two Elna Starget 1,000uF/50V caps in view, plus several also Elna caps around the place. 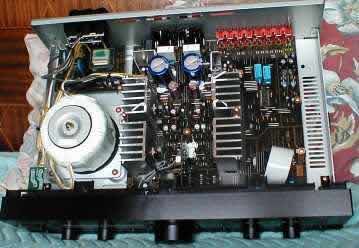 The Phono RIAA section uses a Mitsubishi 5220 IC, commonly used for such purposes; however, the resistors around it are of typical commercial 5% tolerance, rather than selected metal film ones.

The power section uses IRF 540/9540 MOSFET output transistors, preceded and driven by a completely discrete circuit. It is of typical Pioneer quality, which is to say it's neatly laid out and very accessible indeed. The power transitor heatsinks use an unusual method - each power transistor has his very own finned heatsink, so it's not just separate heatsinking for each cahnnel, but for each transistor.

Switching uses CMOS logic, but this activates some discrete vacuum relays, at least for some of the inputs. The volume pot is motorized, but is of typical commercial quality. The circuit in general is of a hybrid type, mixing and matching integrated circuit op amps and discrete components. As far as I could see, all are of typical mass produced quality.

A handy feature are three AC sockets on the amp's back - this greatly saves on wire runs, cosmetically as well as electrically. Offsetting this is the power chord - it uses a flimsy socket and doesn't look like much. I would have preferred a proper IEC socket if a socket it must be.

The amp cover uses as unusual construction as well. It is of typical think metal, yet the area above the heatsinks uses an additional plastic (???) screw-on cover. I can only assume this is an equivalent of the usual removable bottom plate - by removing only this plastic center piece, one gains access to the small potentiometers, used for adjusting the amp, so I can only assume this was done for the sake of easier service and adjustment.