Here we compare three DIY preamplifiers. For off the shelf preamps you should look at L. Cadeddu TNT review of four preamps. I component built two passive shunt type stepped attenuator preamplifiers. DIY kits are also available. I used the same materials for my builds. One was built with two, one for each channel, 5w Kiwame carbon film fitted as the series load resistor and the other fitted with two TKD Correctohm CM2 2W metal film resistors, both are inexpensive so called boutique resistors. I then swapped out the Kiwame and inserted Vishay bulk foil resistors. The shunt attenuators considered were built with one input and one output, were 10k ohm, were passive and used the same quality parts, wiring and phono sockets. The only difference between the preamplifier builds was the series resistor.

Why 5W and 2W? These were the highest watt values available to me at the time for each make of resistor. High watt resistors dissipate heat better and keep resistor noise down. 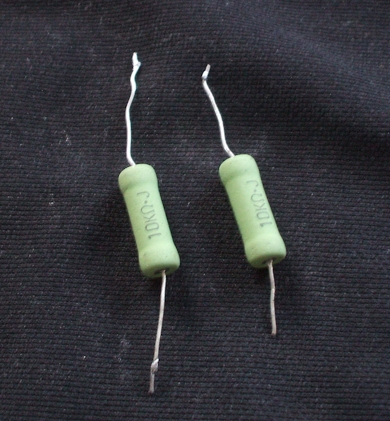 With 5w Kiwame carbon film resistors fitted I thought that the highest octave of piano sounded very good: there is just the sound of a dulled felt piano hammer hitting the string and the noise of the string. Bliss.

The Kiwame had poor detail retrieval. Andriessen's layered multi instrument piece Hoketus features two pan pipes; these could not be heard with the Kiwames fitted. Listening to an ensemble (Flames and Blazes, Das Orchestra Consorts, 889211359400) of recorders, cello and trombone, the sound with the carbon is very good; clean, detailed and musical. And sounded better than the TKD or foil. But here the music is neither low, layered nor complex. Listening instead to an orchestra (Pierced by David Lang, Naxo label), the carbon resistor sounded too dark, too rounded, was muddled and generally did not sound musical and played with a poor level of detail - it did not sound good to me.

The upper frequencies of the Kiwame carbon film, with uncongested material, was unforced, natural and beautifully controlled. Castiglioni uses high register notes in his compositions and his compositions for piano (Sarah Nicolls playing) are no exception. This CD is difficult for some systems but this CD played handsomely with the Kiwame fitted preamp, the best I've heard it.

I wanted to live with the Kiwame but I would have had to throw out at least one in three of my CDs. All the orchestral and complex CDs. 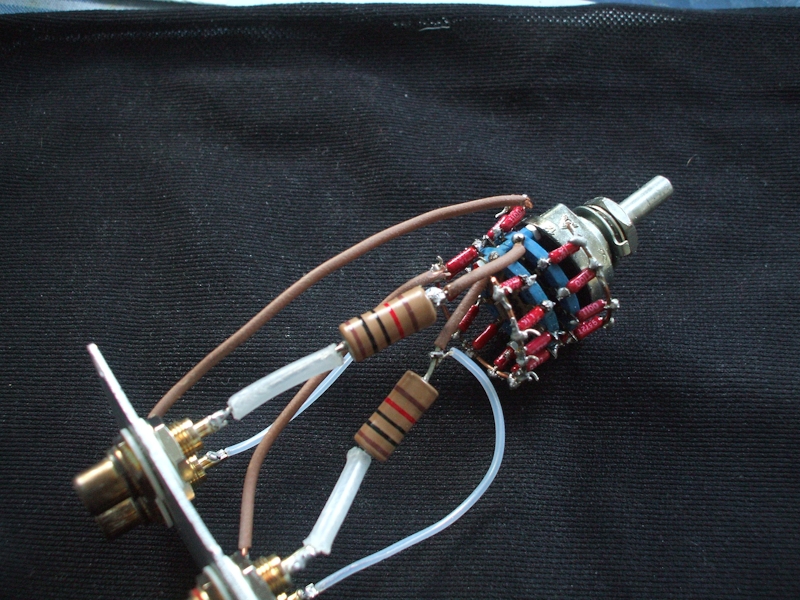 Moving to the TKD metal film as the series resistor, this had a good mid range tonal balance. Solo piano sounds good. Mid range violin is nice and generally the mid range and lower mid range, of uncongested material, had a good tonal balance and acceptable detail with this resistor fitted.

The resolution of congested material (John Adams China Gates) is not the best. Listening to Steve Reich's close harmony vocal piece Proverb (Nonesuch} this was played without harmonic distortion issues. And Ruders soprano featured Pestilence Songs were listenable but noticeable were not as well presented as with the carbon film fitted. With the TKDs fitted I could hear both pan pipes playing in Andriessen's Hoketus

Playing Jonathan Harvey's Rite for Piano Trio (Trio Fibonacci playing), the timing was off and the TKD fitted resistors did not seem to keep up with the layered rhythms. In comparison, playing the same CD, the Vishay bulk foil resistor had better soundstaging, more bass detail, timing was better and the music, and its layered and complex progression, just hung together better. For most material the pace and timing with the TKD was fine. Steve Reich's Music for 18 Musicians was played at a pleasing foot tapping pace. And Glass's Civil Wars (0075597948721) was played surprisingly well, better than the foil, and this CD previously (with an inexpensive Transformer Volume Control) sounded cupped but not so with the TKD.

The TKD is not as detailed with congested material as the foil but this is not overly obvious. The TKD did give a mid range tonal quality, a level of detail and a soundstaging for ensembles of up to about eight players. I did want better timing, for about 1 in 15 CDs. If there are pace issues with your system then the sound may become overly polite or mushy with the TKD. For me I was so enjoying listening to this TKD shunt preamp I did not generally miss the greater detail, soundstaging and timing offered by the Vishay bulk foil. However I did miss the upper frequency rendition of the carbon film Kiwame.

If I had not heard the Vishay bulk foil fitted preamp I would have been happy to have lived with the TKD. 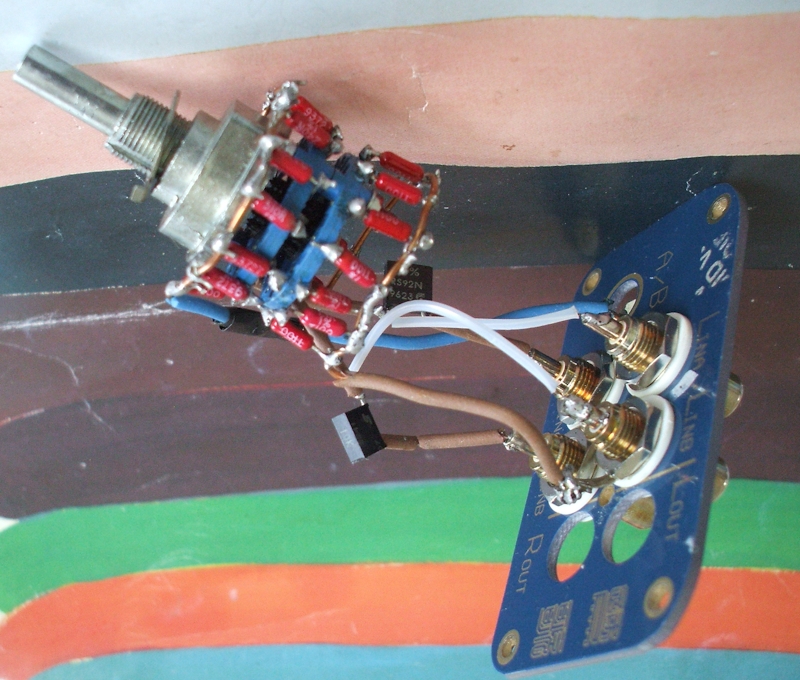 This is a first generation Vishay SFERNICE Foil resistor (0.1% 2ppm high precision RCK RS92N). Detail is very good with this resistor fitted. I really notice this with mass vocal and orchestral pieces. With congested material there is much less crowding out of detail. John Adams ninety singer plus chorus pieces, Harmonium and Klinghoffer Choruses (Nonesuch 79549), plays well and with lots of detail, and, from listening, there is no obvious crowding out of detail or loss of frequency dynamics.

Solo instruments at higher frequencies can come across as a bit dry, uninvolving and with seemingly less presence. Takemitsu piano recordings (Crossley playing) is good but sometimes sounds uninvolving. This solo piano CD tonally sounded better with either the carbon Kiwame or the TKD resistor in place. TKD gave the best performance.

The foil resistor has a low noise profile and this makes for more detail. With more detail instruments are easier to identify, are better defined with seemingly more surrounding space and are easier to follow and hence soundstaging comes across as cleaner, more dynamic and deeper.

Once you've heard the Vishay foils level of detail you'll find it hard to accept a preamp with less detail.

The Kiwame carbon film resistor (10k ohm, 5 watt), fitted as a series resistor in a shunt pre amplifier, might work if you only listen to small ensembles of up to five musicians and if you value high frequency performance. The top end has to be heard to be believed. The carbon film resistor does not perform well with larger instrument groupings or where the bass is complex, layered or multi instrument. The resistor does not pace too well either, but who cares when the top end sounds, to me anyway, this good.

The non-magnetic 10k ohm 2w TKD metal film had good mid range tone with solo instruments like cello, violin, piano and small to mid size ensembles. You might get better top end performance with the carbon Kiwame and there is more dynamics, detail and pace with the foil however the TKD does have mid range tone and is musical. And stays musical with orchestral pieces though some detail and soundstaging is lost. With some solo instrument CDs, and recording dependent, you are sometimes treated to a weird ghostly 3D presentation; a floating piano body with no legs also just the player hands. There were CDs where the music complexity came across with timing issues. And the TKD may be sensitive to partnering equipment.

The bulk foil resistor (Vishay 0.1% 2ppm. 10k ohm) fitted as a series resistor in a shunt type attenuator won it for me just for the sheer pace, timing and detail. That's what I like. And if you like large ensembles and orchestra pieces the Vishay bulk foil can not be beaten. It's not flummoxed by complex music. The resistor does have tone but higher frequency instrument body can come across as weak.

If I did not listen to orchestral pieces, and if tone is tops, I'd go for the Kiwame or TKD: the Kiwame for small ensembles and for the high frequency performance and the TKD for a wider range of instrument groupings. However if you rank pace, timing, detail, dynamics and soundstaging and a seemingly effortless ability to play any instrument grouping go for the Vishay bulk foil.

I also listened to the Caddock MK132V Thick Film Resistor as a series resistor in a shunt type passive preamplifier set-up. This did not work for me and I found that, for me, its performance was lacking and was not good. However I only gave this resistor two days in circuit. I did not like the sound and I did not want to listen to it any longer than I had to, but I'm thinking now that perhaps the resistor needed a longer play session.