There's no need to introduce Audio Analogue, the Italian brand located in Tuscany which has earned a very good reputation among audiophiles mainly thanks to its integrated amps, the Puccini and the Puccini SE. Recently the A.A. guys broke new ground even in the digital field, with the introduction of two innovative CD players, the Paganini and the Maestro, recently reviewed here on TNT-Audio.
The secret of their success is undoubtedly due to the sano design and to an uncommon care for finish and aesthetics, not to mention the quality/price ratio which has always been very high.
Now, after several years of success worldwide, the Italian Maison Audio Analogue has decided time was come for new versions of their famous and renowned integrated amps. So here they are, the new Puccini Remote and the Puccini SE Remote (under test). Instead of adding just few touches to looks and finish, the designers have decided to start from scratch and design totally new units. So....

Let's start from the outside looks: first of all, as the new name suggests, the new Puccini's now have a remote control, one of the coolest remotes I've ever seen at any price. The picture can't reveal the jaw-dropping beauty of this solid milled metallic remote control: heavy, ergonomic and carefully polished, this unit is something that should be seen to be completely understood. Way COOOL, period.
It includes volume control (up and down), the input selector (by means of 2 switches - up and down) and a centrally-placed MUTE switch, very useful to temporarily silence the amp.
On the face plate, you encounter a new input selector, served by relais and a series of leds that indicate which input has been chosen (something seen, for example, on Audio Research preamps). Cool, smooth and easy to use. More or less it works like a sequential gear shift on a Ferrari :-)
And if the input selector is new, even the inputs are: now 4 "line" inputs instead of 3, a brand new "pre out" output for using an external power amp and finally an uncommon "tape off" switch that should silence the tape loop for improved sonics. 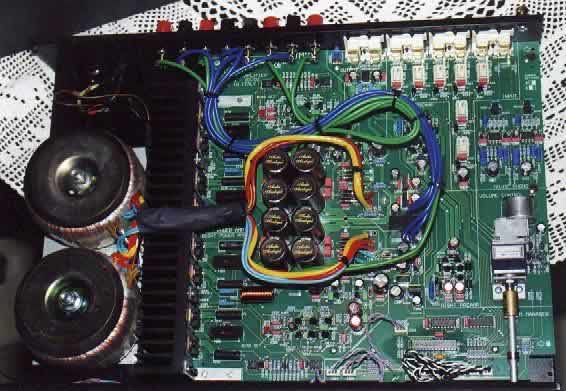 Inside view of the Puccini SE Remote, please note the upgraded PSU!

Following a good and well established Audio Analogue tradition, the new Puccini SE Remote still offers a good phono input, which you can set to MM or MC just from the inside of the amplifier, directly on the circuit board.
There are double loudspeakers binding posts to make biwiring easier, the AC mains cable is detachable and near its IEC socket there's the usual on/off switch. This means the Puccini SE Remote is meant to be left permanently in stand-by. To power it on, you just need to turn the volume knob counterclockwise.

Let's have a look at the inside, where the main novelties are hidden. First of all, you can notice that the new Puccini SE makes use of discrete components, few IC's are available.
Then there's a new PSU, with two 200 VA toroidal transformers in lieu of the previous 2 x 150 units. The PSU caps remain the same (37,600 uF total, 4 per channel) while the output power increases till 55 watt per channel (8 ohm @ 1 kHz) and 95 watt per channel (4 ohm). For this reason there's a new heatsink, exactly the same of the old Donizetti power amp. Actually, the whole power section resembles to that one.
In the end, it is a totally new unit with few things in common with the older version, apart the fact of being totally dual mono, as the picture clearly shows.
The price has increased too (there's no such a thing as a free meal :-) ) but this is completely justified by better components, stronger PSU and the presence of a coooool remote control.

Remark. The old Puccini SE can't be upgraded to this new version as they are totally different.

Thanks to the Audio Analogue staff I've been able to test the new unit head to head with the old one. The "family battle" has kept me busy for a couple of months and I've used the amps inside three totally different set-ups and rooms....I'm pretty sure I've been able to pick the main differences up.
Normally, I'm very skeptic about "mk II" editions as they are, very often, rip-off's. The market asks for "improved" units year after year and you aren't allowed to offer the same old design for more than 5 years, otherwise you're history.
For this reason, the head to head test of the two amps has been very, very interesting. A nice surprise, indeed.
Yes, despite the amp is almost totally new, its sound is very close to the general "mood" of the old unit.
In some areas, though, it has been substantially bettered!
It still offers its Music gently, with that velvet tubey touch that has made it a worldwide success. BUT!!! The mid-high range is now smoother, cleaner, harmonically richer and it helps moving the whole sonic performance into the league of integrated amps that cost 1,500 $ and more.
If you think your old Puccini SE is smooth and refined, well, think again. This new unit wins hands down, bar none. It even seems the new unit can go higher in the frequency spectrum, thanks to the increased harmonic content.
The same happens in the mid range, now more polished and precise. Voices appear more natural and less grainy, for example.
In the bass department, something has changed, and - again! - for better. Do not let a quick listening test fool you: the new Puccini may appear less solid in the 150-200 Hz region but listening carefully and comparing the two amps to a reference unit you suddenly can notice the bass is now far more linear, as it was a bit "fat" in the old version.
It had that kind of 150 Hz "boost" to 1) make it sound more powerful than it actually was and 2) to add that old tubey "mood" that made the Puccini so different from its colleagues in the same price range.
Now that "boost" has gone but you won't miss it because the new unit does have deeper, more articulated and cleaner bass lines. Below the 100 Hz-taboo limit for many integrated amps the new Puccini shows authority, "drive" and a linearity to die for.

The "tubey" and velvet touch of the old Puccini is still there so the dynamic performance of this improved unit is convincing, though not exactly walls-shaking. Anyway, thanks to the beefed-up PSU and output stage the new Puccini SE Remote gives something more than the previous version, especially in terms of "drive" and control of the woofers membranes.
Fast but not in a hurry, the Italian amp sounds solid but not explosive. Anyway, when hooked up to "bad guys" (for example, I've tested it even with a pair of Klipsch RF-3 98 dB/w/m floorstanders) it still can shake your floor and windows.
And yes, it feels at home in the microdynamics department, it sounds with plenty of detail and grace, though it can still give a lively kick to the most energetic rock tracks.

Of course, it is still a 1,000 $ amplifier so it can't create the large soundstage the "big" electronics have. Width and depth are good, while the height is just fair. Thanks to the fact this amp sounds with grace and elegance, the soundstage appears not exactly "sculpted" and "crystal clear". The contours of the virtual images of singers and instruments appear a bit "blurred". The scene does contain many details, though.

It is mostly an universal amplifier, ready to play with the majority of the loudspeakers in the market. This doesn't mean it will replace your Krell or Mark Levinson :-) but, still, it will fill your room with plenty of good Music even if your speakers are of the sub-87 dB kind. The power is enough for most applications.
Its velvet touch can make aggressive speakers sound smoother or, if this is the kind of sound you're looking for, it will be an excellent partner for a pair of smooth and warm minimonitors.
For a better sonic performance, leave the TAPE OFF switch always on and change the stock power cord with something better, such as our DIY designs. Keep it permanently in stand-by mode, unless you plan to stay away from home for weeks. This way the amp will be ready to perform at its best without long and tiring warm-ups.
The new, large heatsink allows a better cooling of the output stage so this amp stays "cold" most of the time, there no need to leave a lot of air around it. Do not hide it into a poorly vented rack, either, as it will suffer and you won't be able to make the remote control operate flawlessly (see the Complaints section below).
The four rubber feet work fine but there's still room for some tweaking: we have reviewed many of these after-market accessories, the soft ones being the best choice for this amp, in my opinion.
The PRE-OUT output can be used if you plan to upgrade the power section with an external power amp, for example (not recommended, though).
The phono input stage is a gift for analogue-addicts, since this feature is becoming rare on moder amps and preamps. It is a very good sounding stage, with audiophile-grade components and it will allow you to save up to 500$ (i.e. you won't need an external phono preamp).

Once again, the thick aluminium face plate has forced the designers to place the IR sensor of the remote control way too recessed inside the unit. This means that you won't be able to make the remote operate unless you point it directly to the amp. Also, though wonderful, the remote switches are too small and not so smooth to press: the "click" isn't clear and safe and sometimes you wonder if the remote command hasn't been esecuted because you pointed the unit in the wrong way or because the switch hasn't been pressed correctly. Not good.
The Puccini SE under test had a certain buzzing noise from the transformers, nothing serious or particularly annoying, especially when listening to Music, but still audible.
Perhaps a pair of "silent blocks" between the toroids and the cabinet would have solved the problem.

Sonically, you have to love this amp. I mean, its sound should be the one you're searching for. Otherwise, especially if you're used to crisp and brutal amps, you'll find this unit way too smooth and sweet. Anyway, do not let a quick A-B test fool you: the amp that sounds lively and sparkly for the first 5 minutes can easily become unbearable after 3 hours. This kind of A-B listening tests, especially if performed at the dealer's listening room, can be quite misleading.
With the most energetic musical program, like metal or techno, you may want to test listen something else, though.

This is a substantial upgrade, not a mere marketing operation. The price has gone up together with the sound quality and ease of use, so the usual high quality/price ratio of the previous unit has remained the same. Errr, I'd say that even the Q/P ratio has been bettered!!!
If you want an integrated amp which offers a (cool) remote control, a MM/MC phono stage and a sound quality second to none, the Puccini SE should be into your "must-listen" list.

Finally, congrats to the Audio Analogue staff for bettering an already pretty good amp and a warm thank you for having let me play with the two units for oh sooo long time :-)