State of the Art Op Amps!

The York Phono Preamp MK1, designed and manufactured by Six Acoustic in the Durham region east of Toronto, has been available for a bit more than two years. There are, of course, a lot of competitors in the under $1000. phono stage category. Even if we remove all the units less than $250. there are still so many that it might take years to review them all! However, I was still anxious to try a Canadian entry into this range. What made Six Audio believe that they could compete in this segment?

Six Acoustic has adopted the standard, indeed ubiquitous, brushed aluminum box approach for the York. The case is solid and well made with some ribbing on each side which may be just decorative as the unit does not get the slightest bit warm when in use. The front panel controls, from left to right, give you a gain adjustment, MM/MC selector switch and the On/Off switch. The Gain control is the interesting feature here, something that one rarely finds on a phono stage and especially one in this price range; a hint that this unit is not just any ordinary phono stage. The MM/MC gains are 40 dB and 60 dB respectively with an adjustment range of -4 to +12 dB. The back panel has the power supply socket, input and output RCA plugs and a ground connection lug. Flipping the unit over reveals an array of DIP switches for varying the input resistance and capacitance. The resistance settings are 47K, 1K, 100 and 20 Ohms whereas the capacitance settings are 0, 100, 150, 220, 250, 320 and 470 pF. The unit comes with a nifty red plastic tool for setting the DIP switches.

Six Acoustic also offers a “Special Edition.” This is not described on their web site; an exchange of emails revealed that this refers to a black edition which comes with impedance values of 100/470/1K/47K. The email goes on to say “If the customer requests an altogether custom load configuration for the silver edition, we can make that happen as well under this option. The option also includes a custom version of the load label to match the requested values”. In the past I have experimented with the resistance setting on a phono stage in small increments using 1% resistors. I found that with my MC cartridge that required a very low resistance value, a change of as little as 10 to 20 ohms made a difference. However, this really would only be the case for some specific carts. I would say that for most users, the resistance settings provided in the standard unit should be sufficient.

This review will not discuss the internal components or layout of the unit as Six Acoustic has requested that I don't open the case. Any competitor, present or future, who wants to know what's inside can easily purchase one and open it, so I really don't see the reasoning behind this request! The literature states that the York uses 0.1% resistors and 1% capacitors, very tight adherence to the RIAA curve and the use of State of the Art Ultra High-end Op Amps. 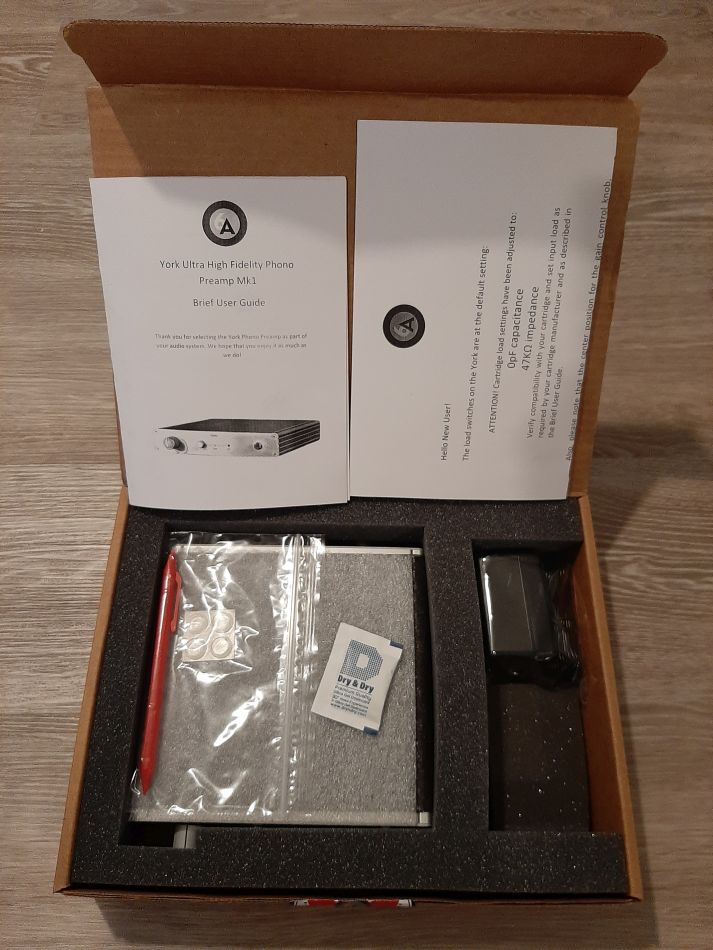 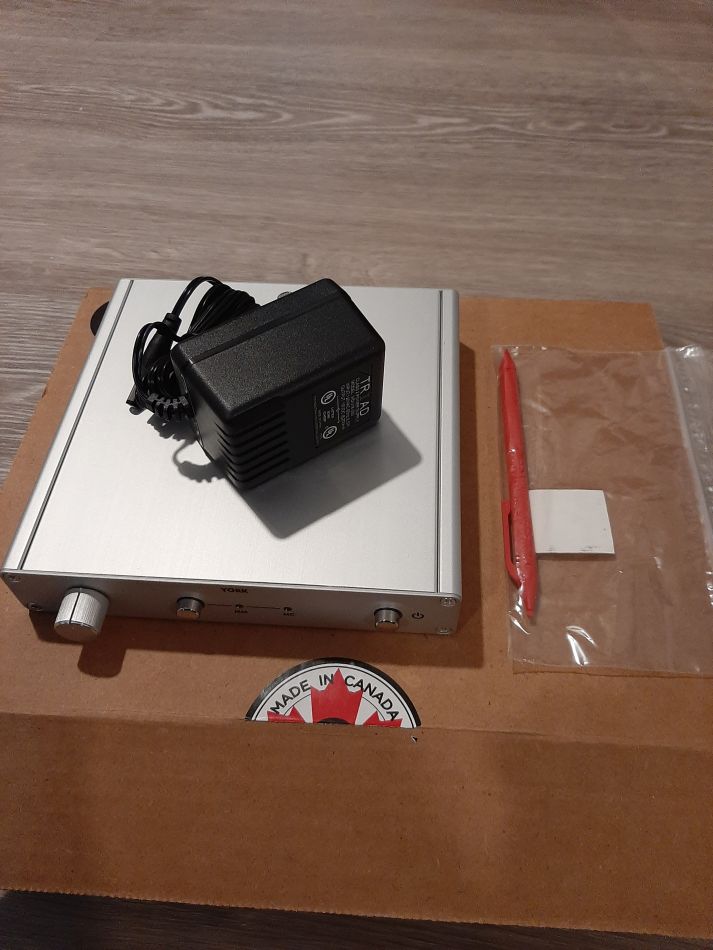 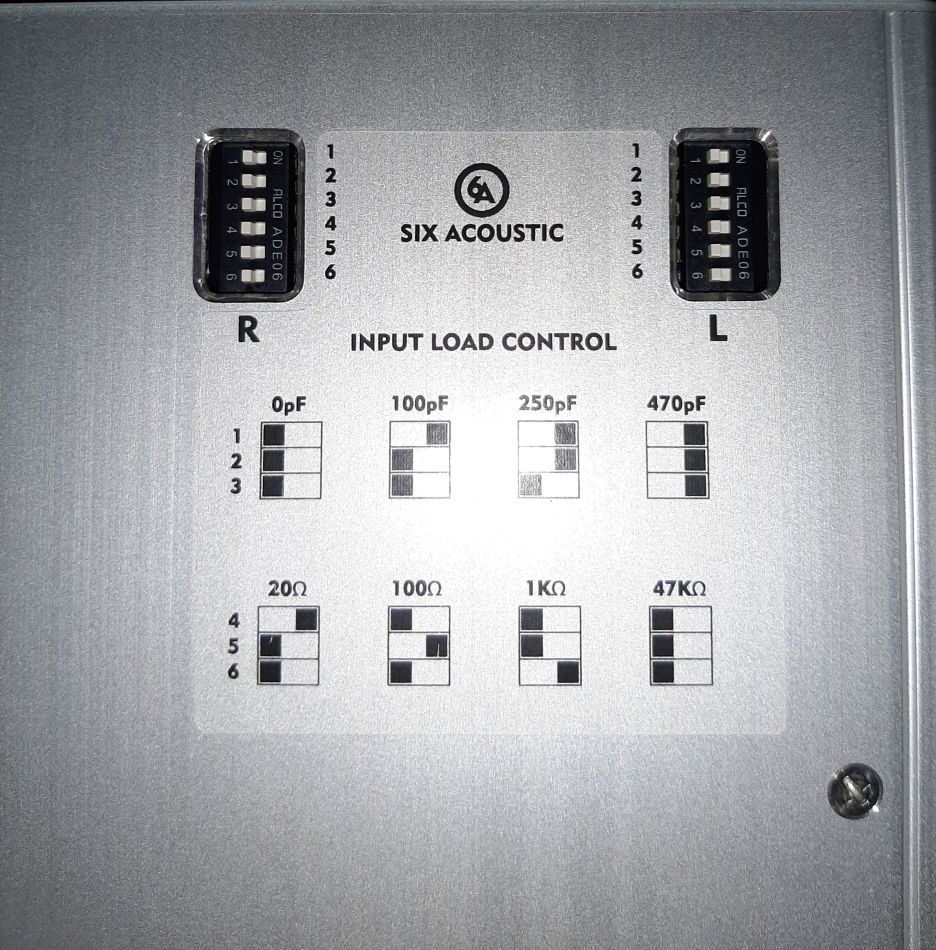 All of the tests described below were done with the gain knob set to the centre position, that is to say 40 and 60 dB gain settings were used. With my system there was no need or perceived value with adjusting the gain. Certainly, there are systems out there that would benefit from this capability and at least one of my previous system configurations would have. For the record, I did test the gain adjustment just to see how it worked and it did perform just fine and provide quite a lot of range.

My first test period had the York connected to a Dual 1228/Shure M95ED combination. The input parameters were set to 47 kOhms and 0 pFarads. This was really a decisive test, something that would fit well as the “big finish” at the end of this report rather than at the start. Here's why: I inherited the M95ED cart with a Lenco idler turntable that I bought a few years ago. I installed it a couple of times since then but was never in any way impressed with the sound and had made up my mind that this was simply bad-old stuff that couldn't compete with cartridges available today. Well, it turns out that I was quite wrong. Evidently, it was, in fact, the phono stage that I had previously used that was holding back the Shure cartridge.

In my original tests the M95ED sounded shallow and strained, like music on a diet - not quite able to let the listener relax and enjoy the music fully. Playing the M95ED through the York phono stage gave it a new lease on life. It was smooth and full sounding with ample tight bass. Solo instruments sounded much more natural and cleaner. I suddenly realized that I was the owner of another quite usable phono cartridge! Further tests revealed that the M95ED sounded a bit better with the York set to 250 pF, which is right in the middle of the 200 to 300 range recommended by Shure. I conclude that the Denon DL160 cartridge that I had used as a benchmark for my original M95ED tests had enough to overcome the deficiencies of my economy Pro-ject phono stage whereas the M95ED couldn't quite get over that obstacle. It was the York phono stage that set it free. Using the Dual-Shure combination Kenny Burrell's Midnight Blue sounded much better than I had expected with a deep, airy, full presentation. Miles Davis Kind of Blue was clean, crisp and bright and the horn solos had lots of air and impressively pure notes. Not perfect, but way better than I thought was possible from this old cart. Freddy the Freeloader was powerful and punchy; one could really feel the room and the trumpet notes bouncing off the walls. For comparison purposes, I now replaced the York with my Doge 8 Clarity tube MM phono stage. The Doge tube unit, as to be expected, replaced sharpness with roundness and a richness in tone of the solo instruments but there wasn't a significant difference in the overall sound quality.

The source now switched to one of my fully rebuilt Lenco idler turntables. This 90-pound beast is presently running with a rebuilt Linn Akito tonearm and a Dynavector DVXX2 MKII cart. In this setup, the York replaced a Coincident Statement step-up transformer feeding into the Doge 8 Clarity MM tube stage. The first record played was Steely Dan Gold. The result was not quite as refined and smooth as the Coincident/Doge setup, but still quite respectable. Close enough to get me wondering about the justification of spending $2500. for the “Statement” MC step-up transformer! Next up was Dire Straits Brothers in Arms which came out very precise, but not unpleasantly so.

The next stage of testing switched to my newest (just completed) Lenco idler turntable rebuild. This one is equipped with a rebuilt Lenco tonearm. The original armwand was replaced with a woven carbon-fibre tube (about 10.5 inches effective length), the headshell was replaced with a Dual carbon-fibre unit and the V-blocks were replaced with new brass blocks ordered from Japan. My much-liked Denon DL160 cartridge was installed for this test. For those not familiar with the DL160, it is a high output Moving Coil cartridge designed to run through a standard Moving Magnet phono stage. Records played included Eric Gale Forecast, engineered by Rudy Van Gelder, Bob James III with Grover Washington Jr., again engineered by Van Gelder and Earl Klugh Solo Guitar, mastered by Bob Ludwig. Overall, the performance was very neutral and smooth while certainly not lacking detail and punch. Lots of space and the soundstage was ample in all directions; up-down, side to side and back to front. Instrument separation was also excellent. Switching to the Doge 8 MM stage gave pretty much the same results as were found when this switch was done with the Dual/Shure setup discussed above.

A final listening session was done using a NAD C320BEE integrated amp and Bowers and Wilkins DM303 bookshelf speakers. The overall sound was, of course, not as good as my Coincident speakers and Canary 300B amps but still maintained air and depth and texture in the instruments. The basic qualities of the York were still perceptible. The weakest link in the system was certainly the under $500. B&W speakers.

It is not at all uncommon, especially in the lower priced phono stages, to get a better performance in MM mode compared to the MC mode. Sometimes significantly better. No need to worry about this happening with the York, the MC input performs every bit as well as the MM input with not the slightest hint of a higher noise level.

At first sight, one would be tempted to class this unit as just another in a long list of interchangeable entry level phono stages, but don't let appearances fool you, it easily outclasses any under $500. phono stage that I have ever heard and the premium in sound easily justifies the extra dollars required to move up to the York phono stage. The York scores very high on the Value-for-Money scale and it made me seriously question my investment in a $2500. step-up transformer. I think that says it all.

Here is a partial list of records played for this review.