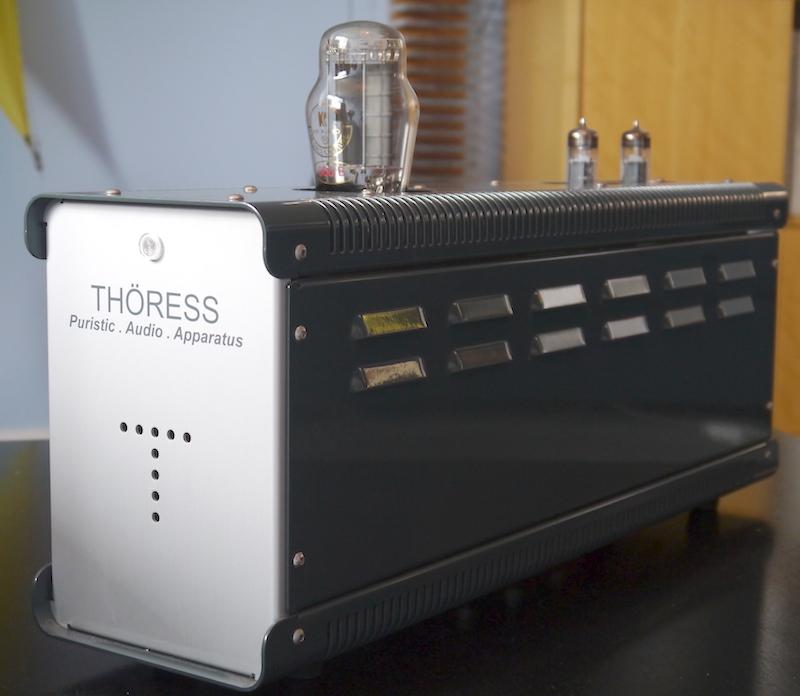 There is a branch of the audio world that believes the only way to go with an audio system is amplifiers using directly heated triode (DHT) valves (tubes) with high efficiency loudspeakers, preferably using a single full range driver with horn loading.
THÖRESS sit squarely in this camp with the classic 300B amplifier and their No. 1 high efficiency speakers at 96dB/W/m. This means I had to find a speaker solution that would work well with these amplifiers.

I started out using a pair of Demand Better Audio (DBA) Envy 3 loudspeakers, a reasonably efficient speaker compared to some and they worked, but not it was not a happy marriage.
The dynamics were squashed and the sound was strained, not what I was expecting from the THÖRESS amplifer or what I know the speakers can deliver.
Next up were my Eryk S Concept Superioro single driver speakers, better but still not right. I love the Superioros and with the right amplifier they are excellent, if restricted in bandwidth. The THÖRESS amplifiers deserve speakers with more bandwidth and higher efficiency.

Recently I have been working with a friend on some speakers using a 4 inch, single full range driver from China available via Ebay. This drive is mounted in carbon fibre sphere from DBA and to my eyes they looked superb. These were good but lacked bandwidth like the Superioros, the THÖRESS need speakers to show off the full audio spectrum and not just their glorious midband.

We then dug out some 15 inch bass drivers mounted on an open baffle that I have been using with a wooden horn equipped compression driver, my personal speaker project still in the early days of development.
I also had a pair of planar tweeters that I included in the mix. The bass driver was fed via a single choke with the tweeter fed via capacitor giving us a single pole cross over. If I have the calculations correct the bass driver is rolling off by 200Hz and the tweeter rolling in about 12Khz. Theoretically the resulting speaker has an efficiency of about 96dB/W/m and with such a simple crossover should be an easy load for the THÖRESS amplifiers.
Most importantly the full range driver has no crossover between it and the amplifier.
The resulting sound was splendid, the detail and clarity of the full range driver with the extension provided in the bass and treble. 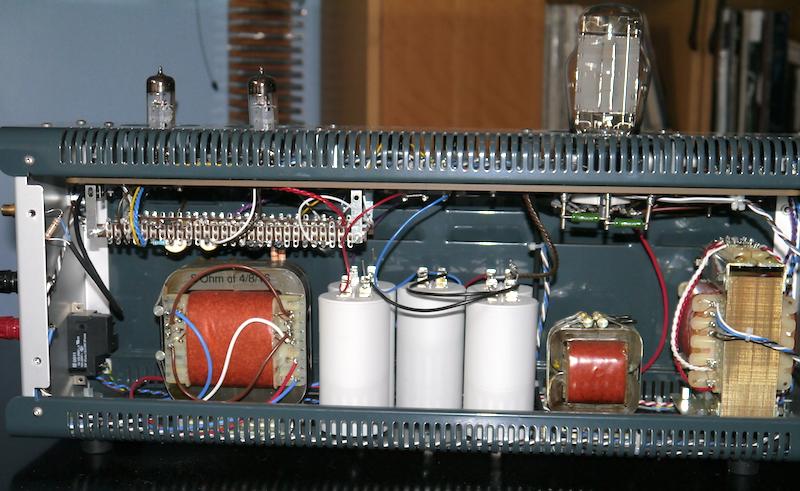 THÖRESS 300B view of the internals

Now we have the speakers sorted, the rest of the system consists of my Music First Audio Classic pre-amp, the Chord Hugo TT DAC fed from a PC running Audiophile Linux for digital sources.

These amplifiers are unusual in that they use an EL803S power pentode for driver duties, operated in triode mode, not the usual 6SN7 or 6SL7 I have used before. This gives a very powerful driver stage, one perfectly capable of driving speakers on their own. The 300B does need a powerful driver stage to give of their best. There is no global feedback used and the construction is hard wired through out. All the transformers and chokes are made in house and feature a tape wound, cut core output transformer, essential for a single ended design to avoid core saturation.

The power supply uses foil in oil capacitors, these should give long term service. Electrolytic capacitors that are found in most power suppliers will need replacing after 5 to 10 years, depending on their quality and how hard they are used.

Unusually the rectification duty is performed by Schottky diodes and not a valve rectifier. The combination of low noise diodes and foil in oil capacitors gives a very solid supply and so a more controlled bass delivery.
Some designs using the 300B have reputation for soft bass, this is not the case with the THÖRESS 300B.

A feature of this design is a relatively low overall gain, this means you need a source that has a high output, i.e. it delivers lots of volts. In my setup it worked fine but you should pick your pre-amplifier with care to ensure compatibility. The transformers are mechanically decoupled to avoid any residual vibration from affecting the rest of the circuit. The output transformers also have internal links to select between 4, 8 and 16 ohm output, make sure you discuss this with your dealer and the links are set correctly before delivery as they are soldered and so not really user selectable.

In the beginning I struggled to find the right speakers and with the top end sounding a bit rolled off. Once I used the high efficiency speakers and set the gain correctly from my sources the amplifiers settled in and began to show their worth.

The THÖRESS 300Bs are extremely quiet with no hum or other valve noises. When changing output valves you will need to adjust a control on the rear to minimise the hum but once set it will not need changing until the next set of output valves.
These amplifiers use automatic biasing so there is no bias adjustment required though you should use matched pairs of valves for the best results.

As mentioned earlier, the bass is unusual for a 300B single ended triode amplifier in that it is very solid and controlled, almost solid state, in the level of control. This was clearly demonstrated on the title track Liquid Spirit by Gregory Porter the acoustic bass was very clean and controlled, no bloom or overhang, just very good rhythm and timing. 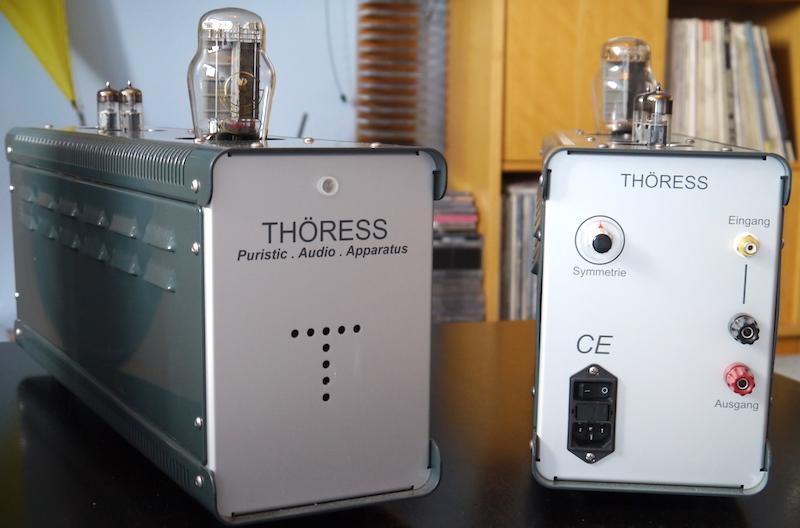 The 300B valve is famous for the tone in the mid band and for some this is all that matters. The THÖRESS 300B demonstrates this tone superbly with the right speakers.
The voice of Gregory Porter is rendered with a rich and realistic texture that is captivating to hear.
Switching to a more delicate vocal performance, that of the Tallis Scholars and their performance of the Allegri Miserere. Again the performance has a wonderful tone whilst at the same time the depth of the sound stage is nicely layered with huge depth.

Sometimes 300B based valve amplifiers are criticised for only sounding at their best with certain types of music, usually simple recordings like a jazz quartet. You will rarely find a loud rock band, such as Led Zeppelin, rattling the windows of a 300B amplifier owner but this does not mean it won't work.

Spinning up my 2014 reissue of Led Zeppelin IV the performance is delivered with great drive, the drums from John Bonham and bass of John Paul Jones have an enticing rhythm and texture and not at all soft as you might expect from a pair of 300Bs.

My favourite track, Stairway to Heaven, is the best I have ever heard in my listening room. The recorders played by John Paul Jones can sound like just one instrument on some systems but not here, this is a superb album delivered with real authority and richness, amazing when you realise the recording is 45 years old.

Moving on to something classical and the London Symphony Orchestra conducted by Steuart Bedford playing the Sir Benjamin Britten 4 Sea Interludes.
I find some of Britten's work hard to comprehend and easily lose track and get bored. The Sea Interludes really touched my musical soul with the Thoress amps delivering detail, tonal richness and control, even the timpani start and stop as you would hope, a wonderful thwack followed by a rumbling decay.

In my collection of amplifiers I have an integrated 300B amplifier that I have fitted with a pair of PSVane mesh plate 300Bs (I know, not real mesh plates). The THÖRESS amplifiers come equipped with KR Audio 300Bs hand made in the Czech republic and are beautifully constructed, they should last a long time. I decided to try my mesh plate valves in place of those from KR Audio, the swap was painless with no need to make an adjustment for hum as described in the manual.

To my ears, in my environment, I preferred the the mesh plate valves though the difference is small and hard to quantify. The sound is perhaps slightly richer in texture and quieter, the KR Audio valves may have had a lot of use before I received the amplifiers so may not be sounding at their best.

If you are spending this amount on an amplifier fitting the best valves is a must. The KR Audio valves are good, I would also consider a pair of 300Bs from Emission Labs. In my experience Emission Labs make superb valves though the pricing is high.

The EL803S driver valves were not swapped as I did not have any, plus they need careful matching. There is a warning in the manual about only using pairs supplied by THÖRESS, so take care and seek advice if you want to change the drivers.

These are amplifiers for those wanting a long term relationship, they are designed and built to last like a Rolls Royce car. The design is very quiet in operation with none of the valve noises you get with some amplifiers. The THÖRESS 300B amplifiers are expensive when you measure them in watts per pound spent but you are getting a superbly made amplifier that will last a lifetime.

In my time with these amps I was able to just sit back, and enjoy the music. The sound stage is wide and deep, the tone rich and fulsome with very good rhythm and timing.
You do need to choose your partnering equipment with care, especially the speakers, so an audition with your intended system is essential, preferably in your home environment.
Get the setup right and you will be rewarded with a long musical love affair.