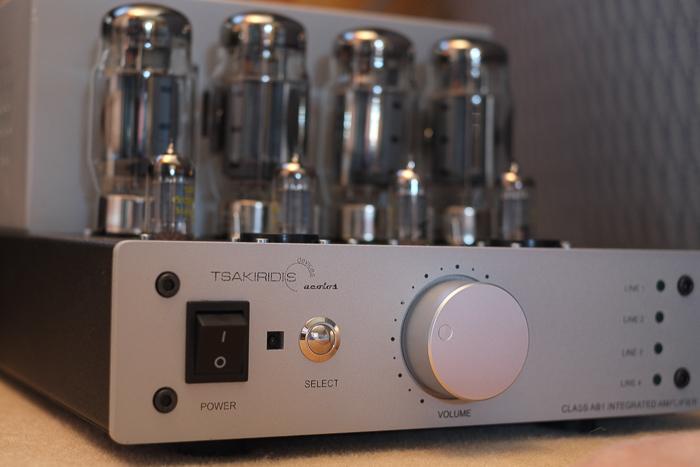 The Aeolos Super Plus is a 50 watt per channel stereo integrated valve amplifier. It is basically the product of Tsakiridis, a Greek company with the stated mission of producing "affordable high end" hi-fi equipment, with some components upgradedfor the UK market. It is distributed in the UK under the name of Flamingo Audio. One of my colleagues at TNT audio heard the amplifier at the Hi-Fi WigWam show back in March and we arranged a loan for review. Since the show, the amp had been upgraded so we were especially keen to get our hands on it. The model that was supplied had been further improved by the replacement of the regular RCA sockets with premium WBT-0210CuM sockets (a £170 option).

First off, an admission. I have seldom used valve amps in my system. My current speakers are pretty insensitive and affordable, high quality, valve amplifiers tend to have low output. On top of that, I am lazy and love remote control, which is often absent on such amps. So I've stuck to solid state and digital amplification for practical and economic reasons. You'll see in the review that follows that I was pretty taken with the Aeolos. At £1745 the Aeolus is not cheap hi-fi by any means, but as an integrated it is competitive with the higher ranges from the mass manufacturers and the lower end of, what we might refer to as, the "high end" and more bespoke market. The price range is rather higher than my current Cambridge Audio so would be a potential "next step" upgrade if I were in the market for such a thing. So, would the Aeolus be enough to tempt someone like me into the world of valves?

The Aeolos came with four each of 12AT7 and KT120 valves. These had already been used for fity or so hours so there was no need to burn them in. Set up was a simple matter of unpacking and inserting the valves into their sockets. I was immediately struck by solidity of the casework. It's a solid and slightly industrial looking beast of an amp. The metalwork is all heavy duty - functional and not unattractive - but with little in the way of concessions to luxury appearance.

The amp is deep but not especially wide. The rear section containing the transformers is permanently covered. The front section houses the valves, in two rows of four along with a row of switches and a pair of VU meters. The switches give the option of running the amp in pentode or triode mode and a choice of the level of feedback in the amplifier, between standard and low. The front section can be caged, to keep prying fingers safe. The cage attaches through screws in each corner, reached by a long screwdriver, which is helpfully supplied with the package.

Ins and outs are catered for by good quality connectors. There are four RCA inputs and a pair of sturdy speaker connectors (one of the improvements on the older model). There's no provision for a subwoofer connection.

The amplifier has remote control of volume and channel switching. The remote which was supplied was a universal remote that had been pre-programmed to the relevant frequencies. Channel selection is indicated by a simple column of lights on the front right of the case. It's hardly a sophisticated display but it does the job.

Set Up and operation

Like many valve amplifiers the bias has to be set. This is a fairly simple matter of adjusting pots with a screwdriver whilst checking voltages with a meter. I was glad, nevertheless, that the amp came with the bias already set. It will need periodic checking and adjustment - which is great if you want to become involved with your equipment - less so if you want absolute simplicity.

One useful feature on the amp - which is simple to operate - is the ability to switch between triode and pentode operation. Triode operation is less powerful but may offer a sweeter tone. Pentode sacrifices the sweetness for a better grip on the speakers. In whichever mode it operated, the amplifier became pretty warm. This might be welcome on a cold day but I was using the amp in the hottest days of the year here! In any event it's certainly not a device to leave within reach of small children (even though there is a cage to shield the valves).

The remote control worked well and the amount of control it offered, whilst basic was adequate. You can control the volume and switch between the four channels but there is no remote power on/off and the input channel selection reverts to channel one and to zero volume on power up.

Finally, it's worth noting that the amplifier was not absolutely silent in use. Late at night I could detect a slight hum from the speakers although this was never noticeable in practice whilst listening to music. It may be that better mains filtration would sort it out completely but I never found it an issue.

After letting the amplifier warm up for a few minutes I delved straight into my music collection. My usual first test is Rebecca Pidgeon's rendition of "Spanish Harlem". It was immediately clear that this was high quality amplification. The location of the instruments was perfectly clear but what I noticed most of all was the amount of body that the instruments seemed to exhibit. It was as if the soundstage had grown and was accomodating a bigger picture of each musician. As I listened to more singer songwriter material, enjoying albums by Ben Howard and George Ezra in particular, I appreciated the full and lush midrange and the sweet treble. The amp could almost have been been made for acoustic guitars!

By now I was into a guitar listening frenzy and moved on to more electric material. I've been enjoying Andy Timmons guitar remake of the Beatles' Sargeant Pepper album recently. There's a fantastic range of guitar sounds on the album. The Aeolos rendered them with aplomb, driving my Usher loudspeakers to one of the best performances I've heard from them. Listening further into the rock guitar idiom with Joe Satriani it was clear that the amp could rock along very nicely, offering plenty of power along with no shortage of finesse.

I normally rely on a subwoofer to reinforce the frequencies below 40hz. But I had left that out of circuit as there is no sub output on the amp. Well, it would be an understatement to say I didn't notice. In fact I was getting more bass drive from the Aeolus alone (at a nominal 50 watt per channel) than I was from a 120 watt per channel Cambridge 851A, supported by a 200 watt sub. I'm not sure it's as well behaved in the bass frequencies as a more powerful transistor amp - listening to Bob Marley's "Kaya" album, the bass was full but not as rhythmic as I am used to. I also found on classical piano that there was a slight loss of the leading transient, making the playing sound a little smoother than I'm used to. In my system these differences in presentation were easily outshone by the overall improvement the Aeolos delivered in terms of overall realism and scale.

I tried switching between pentode and triode operation. The triode mode didn't sing as well with the Ushers as in pentode. Triode operation loosened the control of the bass and it lost the punch and drive that it had in pentode mode. I think it was simply that it needed the more powerful operating mode to control the drivers. This didn't come as a great surprise given the relative insensitivity of the speakers. I could see however that with sensitive speakers, say 90db or above triode operation could offer a very pleasant alternative.

I left the Aeolos at the core of my system for a couple of months (I confess I was in no hurry to send it back). Over that time I listened to a wide range of media. I also connected my TV/monitor output via the Aelos so used it for movie and streaming listening, as well as hi-fi. I found it levelled up the quality of the sources as slight warmth of the amp compensated for less than perfect sources. But it also shone with high resolution material, superbly rendering the acoustic subtleties of, for example, a live Diana Krall album, putting me right in the audience with the band spread out clearly and almost tangibly across the soundstage.

It's often possible to convince yourself that you're hearing an improvement when you change out a component in your hi-fi, even when the change is quite small. The acid test is what you notice when you return to your normal system. Is it a relief to get back to normal or is it a disappointment? In the case of the Aeolos, there was definitely a let down when I returned to my regular amplification.

Even in this digital age, for my money, a great amplifier is still the heart of a fine hi-fi system. The Aeolos is a fantastic sounding amplifier. It's powerful enough, in pentode mode, to drive my speakers to high volume levels and still deliver quality, whilst the remote control, if not perfect, offers enough convenience for an old couch potato like me.
I'm not expert enough in valve amplififiers to comment on whether this is the best available at the price but based on its sound quality and practicalilty I would have no hesitation recommending this amp as a serious contender to anyone in the market for an upgrade.