I'm certain you've heard of Bruno Putzeys, otherwise you really should look him up. He has quite the accomplished career as an audio engineer - notably at Hypex, Mola Mola, Kii Audio and of course Purifi Audio.

At Purifi, he developed the 1ET400A and EVAL-1 amplifier modules that operate in class D. These are the modules around which VTV Amplifier has built a series of amplifiers, and are the subject of this article.

The business model for Purifi is to build the amplifier modules only, and the hobbyist or component manufacturer add all the other bits. But after the modules were ready for market, they still needed to be demoed, so the Eigentakt was conceived. It was a complete amplifier unit built by Bruno strictly for demo purposes. But the demo unit itself caused such a stir in the audio world, that it became sought after, and VTV offers it as a finished unit. The monoblocks are based on the 1ET400A module from Purifi, and VTV very cleverly offers it with a wide range of opamp options - I try two of them for this article. You can order your monoblocks with several opamps, try them all out and return the ones you don't want - brilliant! The swapping of the opamps is easy enough for even me to attempt. 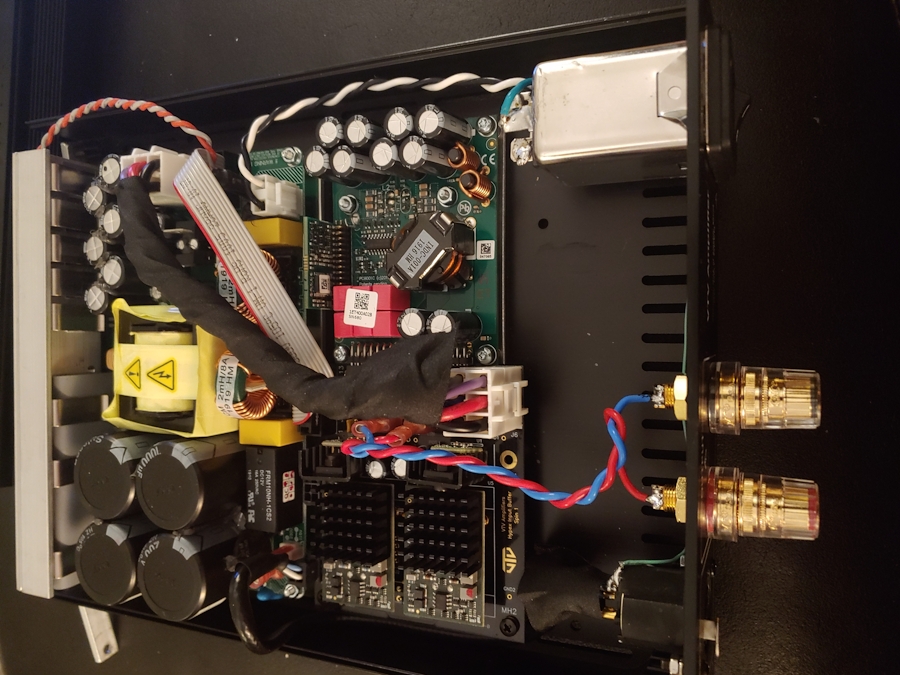 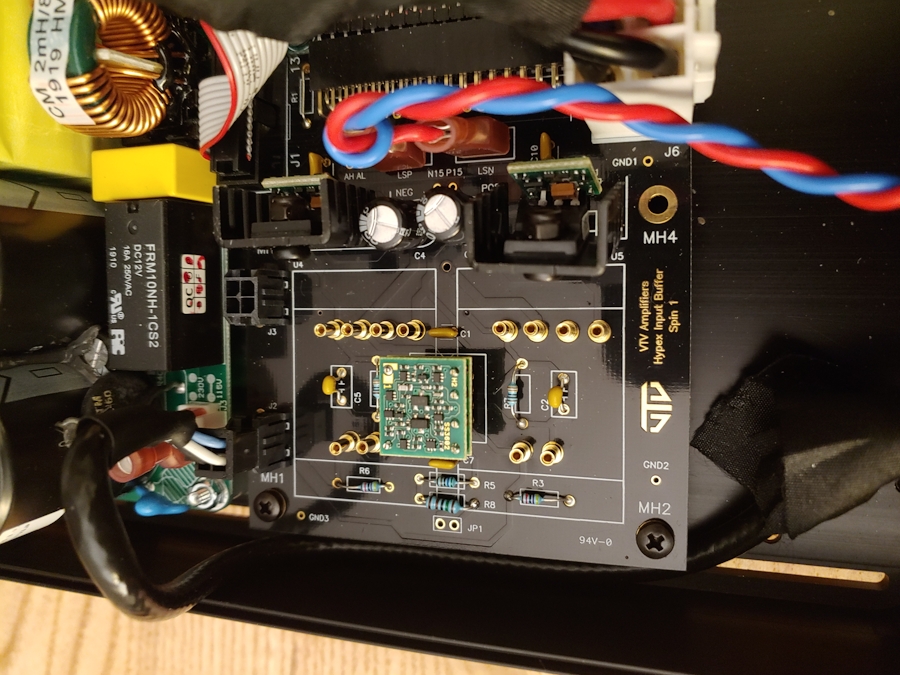 Most tests were on the AK OB1 DIY open baffle speakers, unless otherwise mentioned. For some tests I also used the more difficult to drive Dynaudio Contour 1.3 MkII.

Comparisons were initially done between the Eigentakt; Monarchy Audio SM-70 Pro in monoblock configuration; Classe CA-100 and TBI Millenia but only in battery powered mode. I subsequently got a pair of the VTV monoblock and a selection of the Sparkos Labs SS3602, and the Weiss OPA-2BA opamps.

All tests were done without a preamp, and feeding the Oppo's XLR outputs directly into each amp's xlr input, except for the TBI for which RCA connections were used.

"Guide my feet" (The ARC Choir; Walk with me; Mapleshade; 04132)
A powerhouse recording, I can never listen to more than three or four tracks on this album, before I am emotionally spent. An all acapella gospel choir with 32 former narcotic addicts, and this music therapy program is their lifeline back. I use this track to test for male and female vocals, soundstage and macro dynamics.

The Monarchy monoblocks had some hum, whereas the Eigentakt had a pin drop silent background, resulting in better detail. The tonality of both amps was similar, but the Eigentakt had significantly better transient response. The Classe also had a clean and silent backdrop, and was also much better than the Monarchy for transient response. The TBI Millenia running on 8 AA cell batteries, had an absolutely silent background. Male vocal transients were much better than the Monarchy but less so than the Classe or Eigentakt. However, the TBI seemed the smoothest of the lot on female vocals, I'm not sure if it is a matter of not being able to hit peaks that are actually there, or not clipping the peaks.

Comparing the Eigentakt to the mono-blocks with either the Purifi Sparkos 3602 or the Weiss OPA-2BA op-amps, I could barely tell a difference. There may have been a touch more warmth in the crescendo peaks of the female vocals with both monoblocks.

Compared to the Eigentakt, the TBI had noticeably less palpable transients and slightly less detailed decay, and mid-range notes on the Eigentakt had a bit more warmth to them.

On the Monarchy, again the noticeable hum raised the noise floor, and was the least enjoyable of the 3 amps. Transients were also not as good as the TBI.

The Classe again rendered a very silent background, and excellent transients. The decay of notes and resonances was also superlative, the treble strings did not seem to ring and resonate as much as the Eigentakt. I'm not sure if this was because the Eigentakt is accurate to a clinical degree, or if the Classe is tuned a bit warmer, but on this track the Classe was a bit more pleasant to listen to.

Comparing the Eigentakt to the monos with the Sparkos opamp, the differences between the amps became much more apparent. The Eigentakt reproduced a lot more energy up top, and revealed harmonics and resonances that with Sparkos version were there but much less so. It is clear, that this difference is why, the Eigentakt version sounds thinner in balance at times. Personal preference and ancillary gear will help determine which is right for you, but I am plagued by the question of which version is truer to the original signal. But once I switched to the Dynaudios the answer was different - the Eigentakt was clearly better at longer and more distinct decay of the treble strings, without a hint of harshness. The Sparkos version was just slightly less so, to the extent that you can only notice in direct comparison.

The later arrival of the Weiss op-amps settled the score. The Weiss was at least as detailed as the Eigentakt, but yet beautifully balanced. The best of both other versions, and the weaknesses of neither.

"Mining for gold" (Cowboy Junkies; The Trinity session; RCA; 8568-2-R)
A very high resolution recording, I use to test for micro-dynamics in female vocals and detail retreival, especially noticed in the unintended noise of the HVAC in the background.

The Classe and the Eigentakt were neck and neck again. I am actually quite surprised how good the Classe is, very effortless and natural. The Classe did render the quiver in Margo's voice a bit better than the Eigentakt.

The TBI was a bit less than the Eigentakt in terms of micro-dynamics and picking up the quiver in the vocals. But for a $500 USD amp the TBI is very impressive.

The Monarchy presentation was a bit less at easy as the Eigentakt, and the macro-dynamics were not as pronounced either. Though the Monarchy and TBI were at par, the hum from the Monarchy did lessen its overall performance result.

Both mono-block versions again were undistinguishable from the Eigentakt, on this track.

"Rimshot" (Eryka Badu; Baduism; Universal; UD53027)
This album, and specifically this track have a fantastic electric bass line that dominates the balance and mood. I have used this as an acid test of deep bass performance since its release in 1997. I used my Dynaudio Contour 1.3 MkII for this test, since it can plumb frequencies well below 40Hz.

The TBI self-selected out of the competition, as it clipped right away and pretty obviously. This was only to be expected with the power source being only 8 AA batteries. I have driven the Dynaudio's with the TBI powered thru the mains before, and that posed no issues. However, for this comparison I wanted to stick with batteries for the TBI.

The Classe had good command on the woofer, and the output was clean. But it was not in close to the same league as the Eigentakt, whose control on the woofer was ultra crisp and seemed to plumb a bit deeper too.

Both mono-block versions and the Eigentakt versions were once more undistinguishable on this track.

"Same in the end" (Sublime; Sublime; RCA; GASD 11413)
This is a very high energy track, with big dynamics and a lot going on.

The TBI did surprisingly well, even on batteries it never compressed or clipped.

The Classe delivered everything thrown at it, with a bit more in dynamics than the Eigentakt. But the Classe was not even close to the VTV in terms of separation of all that was going on, and there was a lot going on. The VTV with absolute easy picked every single sonic artifact cleanly apart.

The Sparkos version again seemed undistinguishable on this track. If anything may be a touch warmer than the Eigentakt, but I cannot be certain if that difference was actually there or my mind was telling me to hear what it was expecting. If there was a difference, it was negligibly small. The Weiss version seemed quite a bit better than both others in separating instruments.

"Drum solo" (Tonian Labs demo)
I use this fantastically recorded demo of a drum kit to listen for reproduction of macro dynamics, transients and upper base through treble frequencies.

The Eigentakt was a lot more detailed in the upper frequencies, decays were longer and more vivid. But most noticeable was the separation of notes and resonances, in a league way above the Classe. Perhaps the treble in the Classe was not as vivid and pronounced, the Classe's overall balance seemed a bit warmer. Whereas the Eigentakt seemed a bit thinner in the low to mid frequencies. The bass response of the Eigentakt was very tight and clean, whereas the Classe had just a touch of bloom albeit very euphonic.

The differences to the Sparkos version were again quite clearly noticed on this track, and again only in the treble region. The Eigentakt version clearly had much more detail of the harmonics and resonances of the top hat on the drum kit. To the point, that it overpowered the balance of the presentation, and the excessive treble started to even sound a bit distorted. I very clearly preferred the Sparkos version when played thru the OB1. But quite the opposite when I played the same track thru the Dynaudio's - I now much preferred the Eigentakt version, the treble was more in balance, and the detail and decay were noticeably superior than the Sparkos version.

Enter the dragon....ummm...the Weiss op amp. Again, the Weiss version had all of the treble detail of the Eigentakt, but with a beautiful balance thru the spectrum. Also the Weiss seemed better than both others at naturalness and ease, by far the winner.

"Sevilannas" (Sabicas; Flamenco Fiesta; Legacy; CD428)
A high energy track, with lots of transients and dynamics between the guitar, plamas and castanets.

The VTV was again significantly better at transients and separating each instrument, and note and resonance. Was a much livelier and realistic presentation, than the Classe.

The Sparkos version was a bit warmer sounding than the Eigentakt. I actually preferred the Eigentakt a bit here, with its crisper and cleaner rendition of the dancer's footwork on the wooden floors. But I suspect in the long run the Eigentakt may be more fatiguing for long term listening. The Weiss version again was heads above both, the backgrounds were clean and dark against with every note jumped out cleanly and separated from everything else going on.

"Smooth Operator" (Karen Souza; Complete collection; Music Brokers; MBB9329)
All the previous tests were micro comparisons - where I repeatedly listen to a small segment on one component and then the other, and repeat till the differences are clear and well understood. On this track I switched to a macro comparion mode - where I listen to the entire track on one component, then the next.

The Eigentakt version was my clear preference. The separation of notes and instruments, the space between, transients, decays were all noticeably superior. On the other hand, the Sparkos version was relatively lush sounding and seemed enhanced in the mid-range.

I bought the mono-blocks with the Weiss op-amps. What else is there to say, I am completely bowled over.

Purifi has built an amazing chipset, and VTV has brought it to market with an excellent set of options for the consumer. In my mind this changes the amplification game completely. Outstanding.