Now you can have it balanced

I would imagine not everyone is a fan of class D amplification, but nobody can deny that in the amplification sector they have given us some fresh air and that was quite necessary. In many ways they have completely changed the way we see a power amplifier: from large and super heavy mono-blocks getting hot like small stoves to tiny boxes weighing some 4Kg that run mildly warm. On top of these obvious benefits, class D amplifiers are now in continuous evolution, where power modules are updated every two to three years with some sizable improvements in their performance.

Many top brands in the High-End world now produce power amplifiers built using class D technology and the range is increasing every day. With so many new things happening in this segment, naturally, we pay plenty of attention to the new developments, and when last summer, the ZeroZone IRS 2092 power amplifiers appeared, many of us were tempted to see them in the flesh and, of course, test them. Our Editor had a look at the single-ended version in June 2021 and, seeing his positive comments, I decided to get two of them but, having a completely balanced system, I found a new version with a black case and described as being fully balanced. The order was made in October 2021 to Sep_Audio Store in Aliexpress and roughly a month and a half later a small cardboard box arrived. So far nothing special, with the exception that when I opened the case, the circuitry was completely different from the single-ended version so they deserve to be treated like a new product, and here you can find the results of the test.

When the box arrived the scene was the the usual: a cardboard box with almost no branding, inside some Styrofoam and two black boxes. No trace of instructions; no labels of any kind on the two amplifiers save a small indication of the mains voltage and of being RoHS and CE approved.I spent some time working in a leading appliances company and believe me, these two boxes have never met either CE or IEC norms: there is no serial number, data label on board, safety and electromagnetic compatibility approvals and so on, all things mandatory, but also expensive and this contributes probably to their low cost. Anyway, we audiophiles are a bit flexible on these subjects so I decided to go on, but with some extra care. The first thing I did was to connect them to the mains and switch them on. No smoke,no strange noises, I can still see the television channels and our neighbors don't complain about strange interference on their equipment so we can proceed to connect them to the audio system.

As you can see in the image above, there isn't a lot you can do wrong apart from the small toggle switch used to choose between RCA and XLR input. Pre-amplifier in mute, power on , and immediately a noise comes from one channel as of small electric discharges. After some checks, I discovered that the switch between the two inputs is a bit loose so so the amplifier was neither XLR nor RCA. Check the other amplifier, put the switch in the same position, and everything returns to normal.

Happy that there is no evident trouble I disconnect one and opened it to see what's inside.The Box as in the single-ended version is completely in aluminum, but here is wider than deeper. It is also completely closed without any ventilation openings. This possibly explains why there is no problem with EMC. The cover is fastened in place by four screws and after removing them and the lid you have a view of the inside; the picture below shows it with the front panel to your left. 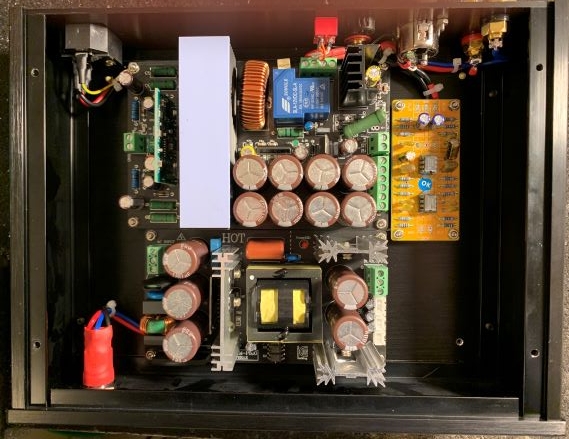 You can see three main boards: the switching power supply to the right (where are the eight capacitors in two rows), the amplification board with three heat sinks for the hexfet, and the third board in yellow on the low side of the picture. This yellow board is present only on the balanced version so I did try to understand the function and also if the change of layout means a truly balanced amplifier or rather single ended that can also accept a balanced input.

Without any scheme or layout, I had to ask for the help of my repair shop and the answer was very clear: the construction is truly balanced and the yellow board manages the balanced or unbalanced signal through two small op-amps you see left and right of the blue dot on the yellow board. Good news is then that ZeroZone did change the layout to build a truly balanced amplifier. The cover touches the large heatsink on the power supply  board and is electrically insulated thanks to a grey rubbery layer on top of the heatsink  All together the small size and this mechanical construction make the box very solid and non-resonant.

For many years, my power amps have been two NuForce Ref 9 SE monoblocks. They are rated at 150W per channel at 8 Ohms and have the same connections so, in a short while, I can swap them with the ZeroZones. I don't have a lot of expectation so I let them burn in with a CD on repeat for three days.

Starting the listening I notice immediately another problem: after switching on, both channels have a noise like electric sparks that disappears after some three hours. Another problem is a hiss in the 1000 Hz area. It was a long time since I had a his so loud so I decided to pay another visit to the repair shop. The feedback was very clear: “the quality of the capacitors in the power supply is very low, and until they get warm they will make the noise. It is enough to warm them with a hairdryer so see it disappear. On the hiss, live with it. Better to leave them always on rather change the capacitors”.

Back home and having left them on for a while we can begin listening. I notice immediately that, to keep the volume to the usual listening level, I need to reduce the pre-amplifier gain by 6dB. Now, -6dB corresponds to 1/4 power so I have the strong suspicion that 600W at 8 Ohms is a realistic power output. First impressions are in line with what is described in the article by our Editor so I can start the comparison with the NuForce. The first impression is of a gain in dynamics: I checked that the listening level was the same with both amplifiers with a sound level meter to avoid the false sensation of "it sounds better" due to the louder volume. The ZeroZones sound more live and less boxed. The width of the virtual stage is equivalent, perhaps slightly better for the ZeroZones. The depth is also slightly in favor of the ZeroZones, but it is very variable. With the NuForces it is always reasonably good while the ZeroZones changing record and the experience goes from extraordinary to very average.

Bass is very controlled, but a bit more present and evident: mid-ranges are excellent on both while on highs ZeroZones are a bit more open and dynamic, but also a bit harsher. The overall impression is that the ZeroZones are a bit more transparent with all pros and cons of this characteristic since again, with good recordings, the result is better, but with average recordings the listening gets unpleasant. My only complaint is about the layering of sound in the depth dimension. Sometimes they move in front, some secondary instruments overlapping them with the voices or leading instruments. Take as an example the song "Getting Better" from Sgt Pepper's album of The Beatles. The sound accompanying the voices throughout the entire song was made by George Martin hitting the strings of a piano with a hammer. It is a very present sound, but with the NuForces it is one step behind the voices while with the Zerozones this overlaps the voices making it hard to understand the words.

They continue to improve after 100 hours of use and, quite surprising for me, they sound better after at least 48 hours from switching on. Now, I have other equipment that are always left on, but it is the first time I see this behavior on class D equipment. In continuous running, they get mildly warm, possibly a few degrees warmer than the NuForces.

How to use them

Always keep the volume to zero or in mute when switching them on. There is a relay for delayed load connection, but 1000W can make a lot of damage when out of control. Remove the rubbery feet supplied and replace them with some Isonodes or similar. No spikes please: the bass range gets a bit dryer, but the low mid-range is dramatically reduced. If you can, keep them always on, since they consume very little electricity and sound much better.

Just the fact that they deserve a serious review is incredible if you think about the price asked by the manufacturer. The build quality is low cost so you wouldn't  expect a high quality sound. The layout is one generation behind the latest equivalent products since there isn't a serious buffer board before the power board. They aren't perfect, but they make every listening session more involving and their transparency allows you to hear every setup change. They give you exactly what they promise without improvements and they can be legitimately compared with the NuForces without a clear winner. If with 200€ you can get such interesting results I am now curious to test comparatively some higher-level class D projects. Stay tuned for more news.