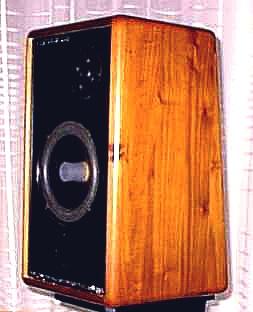 Ultrasound is a young Italian HiFi Company guided by Eng. Creazzo, a man with pretty innovative ideas regarding HiFi.
The Alias is a mid-sized bookshelf of the so-called Energetic Series, a line of loudspeakers which don't use any kind of crossover: the Rebus being the smaller one, the Alias the "middle" model and the Stratos being a floorstander tower.
The Alias I've received for this test is the special "Light" edition, which makes use of lighter drivers (30% less) so to achieve a more transparent and vivid sound.
Efficiency increases also, from 93 dB/1W/1m till an impressive 96 dB/1W/1m so that they could become ideal partners for low-powered tube amplifiers.

The Alias is a mid-sized 28 liters bookshelf with a front-firing reflex port and a cabinet made out of solid Italian walnut. The front grid is a necessary part of the loudspeaker so it shouldn't be removed during listening.
The Alias is equipped with a 1" silk tweeter and a strange 20 cm (8") woofer (see picture) and there's NO CROSSOVER, except a high-value cap on the tweeter (which, according to the designer, doesn't work as a frequency filter...).
The rear panel is sloping so to minimize stationary waves inside the box, which is totally empty: no damping stuff...just pure walnut.
The designer says that even the vibrations of the cabinet have been taken into account in order to optimize the tonal balance of the whole loudspeaker.
Four cool-looking reasonably-spaced binding posts allow an easy biwiring connection.
The Alias has a strange look and certainly it can't easily be hidden into the living room: the main aim of the designer is to achieve very high sonic performance, even saving something in terms of pure coolnees factor.

Let's spend few words about the crossover-less approach: certainly it is a very difficult task since you need to use perfectly "matched" drivers and everything should work perfectly...otherwise there's nothing you can do to "correct" if something goes wrong.
So Eng. Creazzo builds the drivers on his own to be sure of the final result.

Here's the set-up I've used for this listening test:
Thorens 316 turntable - Mission Cyrus Arm - Stanton W.O.S -100 cartridge, a modified Pioneer PD-S 703 stable platter cd player, a Copland CTA 401 New class A tube amp.
The whole system is placed over a TNT FlexyTable and each component is placed over pin points, ART Q-Dampers and TNT Stone Blocks.
As requested by the manufacturer I've used his cables Ultrasound Segnale 1 and Potenza 1 (interconnects and speaker cables) instead of my TNT X 1.5 and UBYTE.
I've placed the Alias on 60 cm tall stands, securing them by means of some blue-tac though during the listening tests I've noticed the Alias seem to prefer spikes.
The listening room can be seen in the picture below (sorry for the Italian description...) 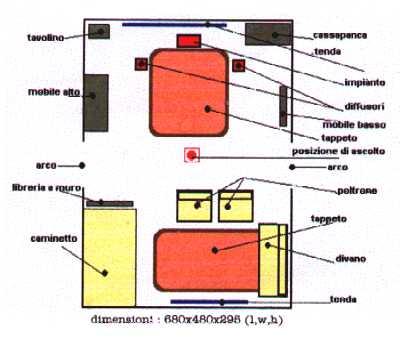 These Ultrasound loudspeakers can be easily detected even during a blind test as their tonal balance is...balanced :-) and certainly it is not the kind of loudspeaker meant to impress after a first listening test.
You need to get used to their sound as it is very, very particular. The study of the vibrations of the cabinet has produced a very "clean" sound: especially the bass range appears entirely "naked" since no resonance can be heard.
Roughly speaking I could say the sound is quite on the "soft" side, with no trace of aggressiveness in the highs and "mud" in the bass. Anyway I can detect a slight colouration in the mids, probably because of the lack of damping material inside the cabinet.
This is somehow confirmed by the fact that the louder the listening level the more audible becomes the colouration.
So this Alias is sweet, sweeter than I'd like it to be, and I'm curious to test it with some Ultrasound amplifier (which make use of an innovative current driving technique, called transconductance).

Not exactly an earth-shaking dynamic performance. It seems the Alias prefer moderate listening levels in a near-field listening position, where they are able to create a soundstage which appears to be very bright though not much wide. Height and depth are far better, though.
The focus of the image is very good indeed and players appear into the scene each one with his own precise location.
Not exactly a fast loudspeaker the Alias doesn't like high listening levels as it shows some sign of dynamic compression. Given the size of the loudspeaker I was expecting a better dynamic performance in the bass.

First of all, be careful with speakers placement: avoid to place them near side or rear walls as they start to "rumble" instead of playing good Music.
The rear wall should be at least 60 cm far while I'd suggest 2 meters (even less) between the loudspeakers.
A little amount of toe-in (15/20 degrees) is necessary but I'd not suggest to exceed with that angle. The pair of Alias I've received were already "broken-in" by other reviewers and some trace of their use (misuse) was clearly visible on the walnut cabinet :-(
Hence I have no idea on the amount of needed break-in time.
Finally, please match the Alias with high quality components otherwise they will sound terrific. Biwiring is strongly recommended too.

Let me tell you all the truth: I've hated these speakers since the first minutes and so the listening tests have been annoying me for the subsequent weeks. After a while I've started to understand and appreciate them, having struggled for a while with cables, system matching and room placement.
These loudspeakers may not be your regular cup of tea: hard to understand and "match" they require a lot of effort to the audiophile.
For this reason, to anyone thinking to purchase them, I'd suggest a long listening test AT HOME.

Below you'll find the manufacturer's comments as he didn't seem to appreciate this listening test much.

The Ultrasound Alias have been tested by other HiFi magazines (FdS 42 - 52 - 65, Suono 284) with substantially different results: everybody agrees upon the airy sound, speed, detail, transparency, dynamics. These judgements are substantial with ours and with other people's ones: audiophiles who possess them or have listened to the Alias in a multiplicity of different situations.
Such characteristics are also substantial with the guidelines of the project: light and stiff cabinet, high efficiency, absence of crossover etc. These guidelines of the project are easily verifiable even with measure instruments.
In this listening test we read about sweetness, softness, mid-band colouration and poor dynamics: these comments clearly are the opposite to what we've found till now and we can't agree on them.
It is true that the sound of the Alias is very neutral, thanks to the optimal tonal balance and to the low distortion, but then we shouldn't forget that the high efficiency and the absence of the crossover make it far more transparent than any conventional loudspeaker.
We think our Alias has unveiled hidden weak spots of the system used for this test. It is hard to tell which kind of weaknesses: according to us the listening room may have deeply influenced the final result. Actually that listening room appears too much reverberant, especially in the mid and bass range.
There are two vast openings in the side walls that surely don't aid a good reproduction.
In our opinion this can, at least partly, explain the poor dynamics, the light colouration and the bass extension. Even the listening position is unusual: in a 6.8 x 4.8 meters large room it is not normal to choose the listening position 2 meters far from the speakers. This could be done just to minimize room interactions.

All the Ultrasound products are developed over a very long period, in which they are tested with various systems and are subject to a series of tests and measures inside many different listening rooms.
The final "balance" is an "averaged" compromise and hence it can't be the optimal one in the 100% of cases.
To have a more complete panorama we report the following excerpts from other HiFi magazines:

Therefore we invite all the audiophiles to verify personally the potentialities of a not conventional loudspeaker like the Alias. Let us remind you that Ultrasound has developed innovative technologies that allow to offer revolutionary products like the multipole loudspeaker systems and the transconductance amplifiers for current driving even series-connected loudspeakers.
Ing. Creazzo for Ultrasound
[ Home | Staff & Contacts | DIY & Tweaks | Listening tests | HiFi Playground | Music & Books ]