Regular readers will know that two years ago I reviewed Cabasse's Sloop speakers. Full sized floor standers, these had produced a superb performance, particularly with acoustic music, with great openness, detail and class leading imaging.
For my personal taste they lacked some of the scale of rivals and though they measure flat anechoically, they sounded (and measured) mid forward "in-room". For a decent sized floor stander they lacked a little deep bass as well.

Prior to receiving the Sloops I'd had a pair of their Farellas here, slightly smaller and without the dual concentric tweeter/mid driver, they sounded very similar though having a little less of everything, not surprising at only 60% of the price and still a fine piece of speaker building.

Which brings us to the test speakers. These are the replacement for the Farella's but rather than a 'warm-over' they are a completely different design.

The size is much the same, at (h x w x d) 98 x 22 x 37,6 cm and a substantial 20.8 kg, but in place of the one mid/bass driver the Caprera runs two in a d'Appolito configuration. Each of these drivers shares the same magnet system as the larger, single Farella (and Sloop) driver, but has a smaller cone, 17 cm rather than the Farellas 21 cm. Needless to say the immaculate build of the drivers is enough to shame most companies. The tweeter is the DOM 35 which takes over from 2500 Hz. The design also allows bi-wiring for the first time, I suspect as much a sop to fashion as a belief in it's inherent superiority. 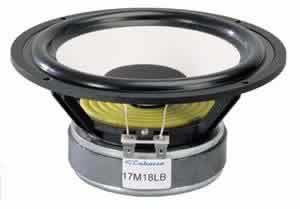 Look more closely at the drivers. They are both 100% in-house designs and follow familiar Cabasse techniques. The mid/bass drivers have white cones made from a plastic foam sheet, which when pressed in a heated mould produces precisely a controlled shape and thickness, the heat also seals the surfaces so that the result is an alveolar structure which is very light and very stiff. The chassis are cast alloy with hefty magnets. The tweeter is a dome formed of a plastic laminate and is loaded by a shallow horn

The box is of similar dimensions to the outgoing Farella but the baffle is now much thicker (30 mm) and features rounded edges to reduce diffraction effects. 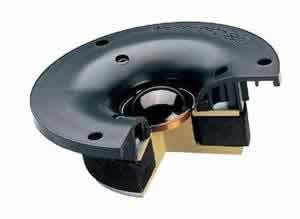 So an extra driver and a better box, and in addition the cost has fallen slightly. So something had to give and sadly in this case the veneer. The Farellas were beautifully veneered at Cabasses own works, the Capreras are vinyl wrap. But if you can spot the difference from 30 cm you are a better man than me. The vinyl on the test pair was cherry, just by co-incidence the same as my own Polaris - the result was very, very convincing and though the loss of 'real' wood is a shame no owner will ever notice. If that is the trade-off for the improved specification then it's a compromise I'd be prepared to take.

All this is matched to a complex and high quality crossover. The result of such big magnets with light cones, and a horn loaded tweeter is a high efficiency of around 92 dbl, this approaches some pure horn speakers which points to the speaker needing little more than a handful of watts to go loud. The snag is an impedance that is not ideal for low powered valves, dipping below 4 ohms. Having said that I tried the speakers with an 8 watt 300b SE amp and it seemed to cope without any problems (and sounded good...). For the rest of the test I used my own Audion 30 watt valve amps which drove the Capreras without breaking sweat.

Having heard two similar sounding Cabasse speakers before, I was expecting more of the same - I was in for a surprise. Straight away it was clear that the Capreras were voiced to be much more even in the midband with much less 'character'. All this is obviously a function of the speakers interaction with my room and system, but it was obvious that with the Caprera we had a speaker that 'clicked' into place.

Take 'Nevermind' for example. This is a disc I often put on early in a test because it shows up so much of the character of a speaker - both good and bad.

The opening drum crashes should appear high and deep in the sound stage - they should explode with weight and sharp leading edges, it's a tough test of dynamics and if it doesn't come off the impact is lost. The Capreras did fine. Then the hard ringing guitar notes that begin each phrase should be edgy but have 'bell like' elements - again the Caprera delivered. Next to my Polaris the speed and edges were a little slower and the scale of the image smaller but at only 15% of the cost it's not surprising, however the Capreras bass did go deeper (not a horn strong point). Swapping to my IPL's showed the Capreras trailing a little in the bass depth department behind these 'bassmeisters' but the Caprera made up a little with superior speed.

Dropping Nina Simone onto the Orbe gave a lovely natural rendition, easy and warm, natural and flattering. Memories of the Sloop's terrific vocal projection and sense of atmosphere lingered but the Capreras weren't far behind.

Then on went my treasured 'King James', a rare Sheffield Labs direct cut, and the big band sang out. With this LP, the Polaris, given a following wind and after chanting the correct mantra, pull off the trick of making you feel you were there. It's a very rare happening - and no, here the Capreras were well behind. This is tough to explain, what is it that makes two speakers that have a not dissimilar presentation, either do 'it' or not? I suspect it's a case of a sound getting better, better, better..... then 'I Believe!!!' Which is of course why speakers that can do this cost an arm and a leg and are so fussy.

Detail retrieval was very good without the feeling that detail was being pushed out at you all the time, clarity of vocal lines being particularly good. Recently when I was in Britain I bought a copy of PJ Harvey's 'Rid of Me' on CD. On a friends hi-fi (a good one) I heard the shouted line in the background of the opening song as "lift my legs, I'm on Fire". Putting it onto my system with the Capreras the line was clearly "LICK my legs" which is an entirely different thing...

They also proved much less fussy than the other Cabasses I'd had here. In this respect both the Farella and Sloop proved more like 'high-end' gear, being sensitive to cables and positioning (like the Polaris). True this could be evidence of a more revealing nature but I'm not convinced. The Caprera's on the other hand were quite happy with FFRC cable (which the others found too bright) and were content both against the wall and a couple of feet out from it. This 'easy' nature further enhances their compatibility - they are easy to live with.

Well how to sum up the Capreras? Briefly - very good mainstream. Other Cabasses I've had here could repel as many people as they attract - the Capreras go into my list of speakers I recommend to people to buy "blind" because though they do nothing exceptionally, they do everything well. No-one buying these are going to come back to me saying they are too bright, too bassy, too boomy whatever. They are also very well put together, lack of "real" wood accepted, and their ability to produce huge sound levels from just a handful of watts means that they will work well with just about anything they are partnered with.

In fact they are much more to my personal taste than the more expensive Sloops. True the Sloops could astonish with certain types of music, but because of that they tended to draw me to certain parts of my collection. My own taste in music is eclectic and I really need speakers that are as happy drawing blood from the Sex Pistols as they are surprising me with Stravinski or seducing me with Aretha Franklin. In this the Capreras excel.

To test a speaker so much cheaper than my own might become a chore - me counting the minutes till I could legitimately give up and go back to my first love. But the Capreras didn't do this, I was quite happy to use them through the test period and a friend who heard them here went out and bought a pair, which considering what a skinflint he is, is no bad recommendation...