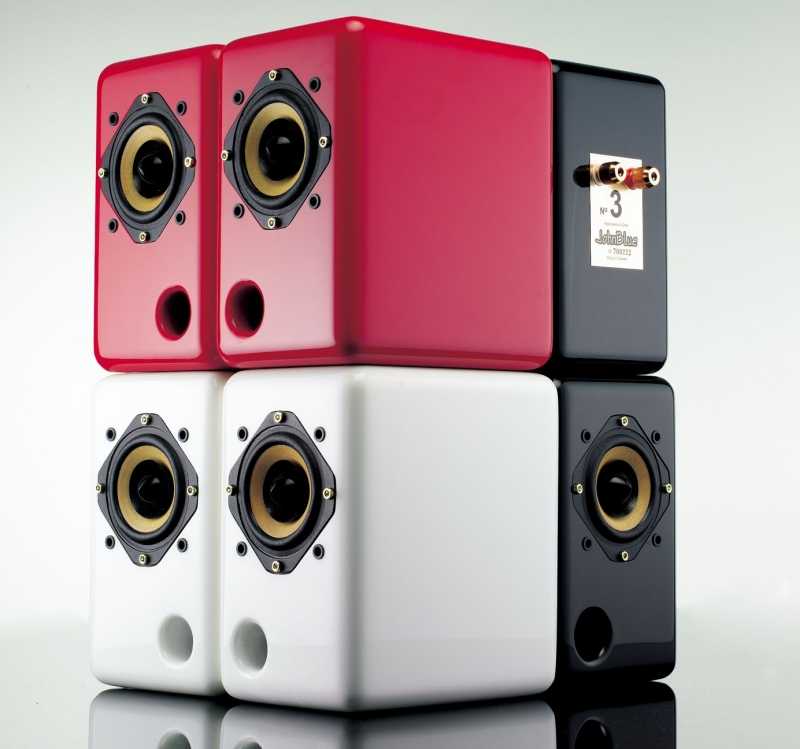 I've said many times that speakers are characterful components and that all involve compromises in one area or another. Yet I was surprised to get a series of rather tetchy emails hauling me over the coals for reviewing the Trivox PureS speakers and giving them a qualified "thumbs up" even at their 4500 Euro price point. The substance of the correspondent's argument was that a speaker of the PureS's size (medium standmount) couldn't even be called a speaker as it was impossible to get decent sound from a compact two-way. Trying to point out the realities of some peoples listening rooms, the advantages of small non-resonant boxes etc fell on stony ground. I have the feeling that the following review will have said writer reaching for the shotgun:-)

You see the Trivox PureS did at least inhabit a fairly well-established category of speaker - the "luxury" compact. The speakers on test here - the JohnBlue JB3's, don't so much as occupy a catagory as chisel out a tiny niche and sit right in the middle of it!

Just look at the pictures - these are the smallest speakers with hi-fi pretensions that I've ever seen. Not only that but those tiny boxes contain a minute driver under 3 inches across and not a lot else. What on earth are they for?

Instead of the usual "construction" heading I've chosen the above because the construction is dominated by the parameters needed to fill that niche.

OK, so there's a tiny driver, but look at the picture of the driver removed. This is simply exquisite - a tiny speaker that strongly reminds me of Jordan's designs for the Goodman's Company - the 401 for example. The difference being that the 401 is a 12" driver. See that gorgeous aerodynamic cast alloy basket and the big double magnet, the bullet shaped phase plug, the beautiful paper cone with its whizzer. This, for all it's diminutive size certainly looks like a very serious driver, a bijou Lowther, certainly not a cheap OEM full-range 3" driver as found in so many computer and mini-stack systems. It even puts real hi-fi 3" drivers like the Fostex 103 to shame. To get even close to the quality (from a construction point of view) the Fostex 108EZ is required and that isn't a cheap driver. I use this comparison mainly because I couldn't find a driver quite like the one in the JB3. Usually such drivers are OEM or modified commercial units - this is, as far as I can find, unique to JohnBlue. 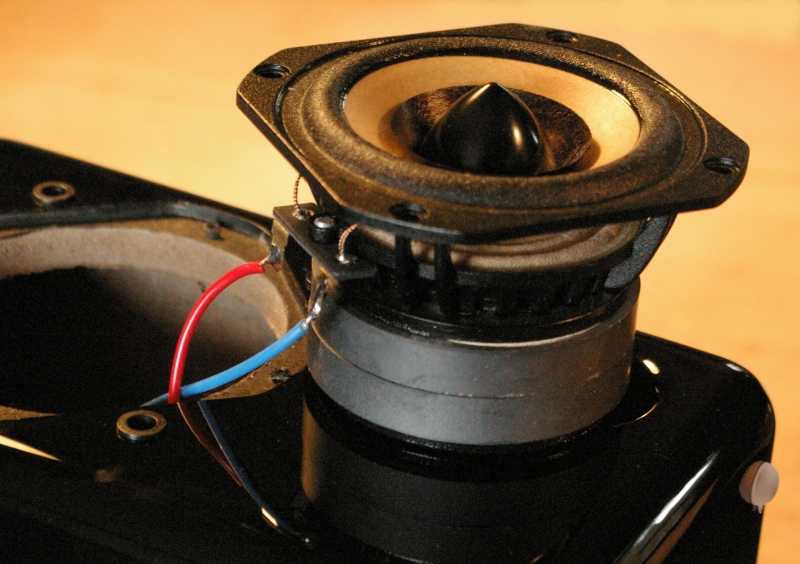 The driver should have no problem reaching high up the frequency range, in fact I wondered if the whizzer was overkill - cones this small rarely have them. The downside is of course that such a small driver can never shift much air - so base response is aided by a long narrow port, and the X-max (how far the cone moves in and out) is unusually large as far as I can see when playing bass workouts.

The box appears to be a pretty standard MDF construction with a sliver of fine damping material - nothing you'd expect to notice. Finish though is piano-black, perfectly executed and tougher than most such coatings.

The twin binding posts are excellent quality and allow for both plugs and (hooray) bare wire.

All in all the quality parts count goes some way to justify the price which is well above much bigger, entry-level two ways.

But what is it for?

A look at under the base gives a clue. Where you'd expect a flat surface designed to sit on a stand's spikes you find four small rubber buttons.

So to answer the question - these speakers are one of the very, very few that actually does aim to be a "bookshelf" speaker. That is they are designed to work in spaces that few so-called bookshelf speakers dare to go.

The size is a clue, these will actually fit on a bookshelf - even one designed for paperbacks. That long port is on the front so being on that shelf, hard against a wall will still allow the speaker to breath. Contrast this with the next smallest speaker I've ever reviewed - the Penaudio Rebel - twice the volume and with a rear-facing port meaning that they have to be out from the wall.

Those little buttons underneith also mean they are less likely to slide about a shelf, or (end excuse me raising the topic), the computer desk. These little gems will sit next to your computer taking little more space than a standard set of ghastly computer speakers. Think about it.

Well how on earth to fairly test these speakers?

So I rigged them up on stands, well out into a big room and powered by the Kingrex T20 amp:-)

Not, I suspect very fair, but what the hell. The result? These are tiny speakers lost in a big room and they are going to sound thin and weedy and really hopeless, to expect otherwise is unfair. But, But... Without breaking any rules of physics, the result, especially at lowish volumes was quite surprising. Being tiny, a near point-source and solidly made makes for great imaging and the JB3's produced some expansive soundstages both in depth and width (in fact especially depth). The biggest surprise was the bass which was warm and bouncy, obviously a large part of this would be a little illusion from a port induced bass hump (circa 100 Hz?) but nevertheless a very pleasing result was produced.

The little lightweight cones provided almost headphone levels of detail, and managed it without sounding too pushy, there was a slight softening of sibilants, often found with dual cone speakers, but I could spend many a happy evening listening to the little beauties singing away in the background for if nothing else they were extremely musical.

But ultimately bass extension is limited and much more importantly the JB3's are never going to shift enough air to give realistic macrodynamics - with limited maximum volume well below party levels everything gets compressed pretty soon. The upshot is that for 1/3 the money you could buy a better all-round speaker to use in such a situation". That said, even here the class-leading imaging and musicality at lowish levels would still show a clean pair of heels to such designs if the buyer only ever listened at very moderate levels. But thats a tiny niche.

What isn't a tiny niche (well I suppose it is really...) is the demand for a speaker you can put between stacks of books, or which will give true quality to a PC based system.

So I unhooked the JB3's and took them (and the Kingrex) to my office and installed them on a bookshelf. The office is about 3m square and though I'd toyed with putting a system in there the result took too much space and sounded pretty poor. As a source I used my Iriver Ihp-120 hard disc player running uncompressed .wav files.

Big smiles all round. Being close to the wall filled out the sound to give even more illusion of base and for the very first time I had what I would call basic hi-fi quality in that office. As I didn't need dance volume there and the space was so much smaller, the limited maximum volume didn't cause anything like the problems and the result was that the dynamics of the speaker began to shine through.

But the best bit was to come. Right now I am writing this with the JB3's either side of my computer monitor. Driven once again by the Kingrex and playing a CD direct from the drive I have a three dimensional sound stage stretching deep behind the plane of the speakers (and monitor) - the effect is quite startling and thoroughly addictive! With the speakers acting as near-field monitors sound pressure levels are ample - you'd find it uncomfortable to sit here with them at full volume. And in this situation the dynamics (true dynamics, not just loudness) are truly excellent. Bass lines are easy to follow with great definition and 'bounce', and instrument separation excellent. I'm trying to criticise here, but in their natural environment they are doing things I've not heard before. My usual computer system uses a small active sub and this was utterly superfluous with the JB3's. In fact you may well get longer reviews from me in future because sitting in front of the screen is so much more pleasant...

I have to describe the JB3's as a niche product, but what a huge niche! Within their performance envelope they are capable of bringing hi-fi quality to places normally so compromised that it simply isn't worth bothering. Hundreds of thousands of people now work at computer desks on their own, where music won't disturb colleagues - the JB3 will give quality music to those people. Living in a tiny flat, a caravan, trailerhome, boat, have a small office, have a spouse totally against any kind of hi-fi that intrudes? In every case the JB3 will work brilliantly, you get tempted to put them in places you'd never have fitted a hi-fi into before - no you won't be able to have a party with them, but that aside they gain my respect for being such a brave and successful product.

The JB3 is original, beautifully built and not overpriced for the quality given. It's not a threat to cheaper speakers in more conventional listening positions, but it stands out as a fine solution for it's target audience.