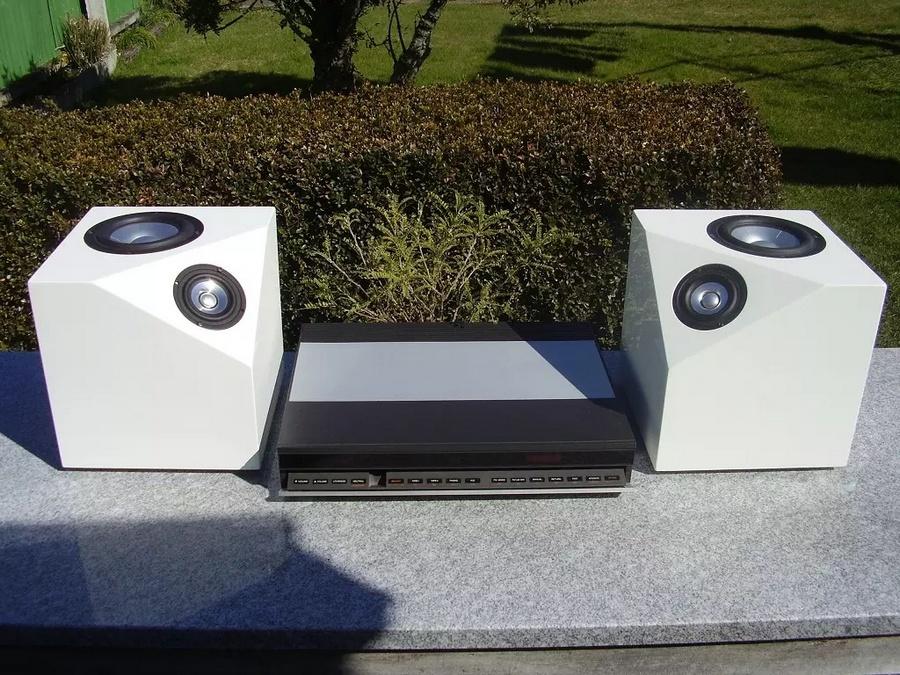 Are you a hopeless romantic who still believes in love at first sight? One glance and it's blindingly evident that the Omuni Minis are not your commonplace bookshelf speakers, but do they capture your imagination? I can tell you right away that these surprisingly small cabinets produce a BIG sound! These unusual speakers come from New Zealand designer and manufacturer Eric Cross of Vintage Audio World. With 30 years experience, Eric feels that specifications tell you very little about how speakers will work in your room or with various equipment, and auditioning is vital. I agreed and so a pair was duly delivered and slotted into my listening room.

The larger drivers are from SB Acoustics, designed in Denmark and manufactured in Indonesia, and the smaller ones are from Fountek and used in many top designs from manufacturers such as Boenicke Audio. Each cabinet pairs the 12 cm bass/midrange and the 6.5 cm fullrange tweeter. Only two high quality crossover components are used (without matching resistors): a Jantzen Audio superior zcap and inductor. In the specially designed wooden cabinet, they achieve a frequency range of 35-20,000 Hz (3dB), with an impedance of 8 Ohm and a fairly efficient sensitivity of (2,83V / 1m) 86dB. Neat rounded rubber feet and connectors are located on the base side out of sight and providing orientation for the cabinets.

Eric told me that "For many years I have admired the work of Richard Shahinian. The first time I heard a pair of his Obelisks was a revelation". The original Omunis (details on the website) are inspired by his original design. The Minis, whilst not fully omnidirectional, have a very wide dispersion that fulfills Eric's desire to design speakers that fill the room with sound while not being bound to the sweet spot demanded by the majority of (frontfiring) speakers produced today. Hence the unusual shape a modified 10" cube. In audition it was indeed difficult to locate the sound source at the cabinets, and I heard a well articulated bass and quite open soundstage above the speakers. Even when looking at the cabinets it's not obvious that they are radiating the sound.

Eric also told me that "due to their rather short stature, the bass and upper bass is enhanced by the surface they sit on. Sometimes referred to as floor effect, it works well, but it has to be carefully blended into the overall design". He suggested that they should be placed on the floor or on a shelf, although my domestic arrangements did not allow for the latter to be tested. 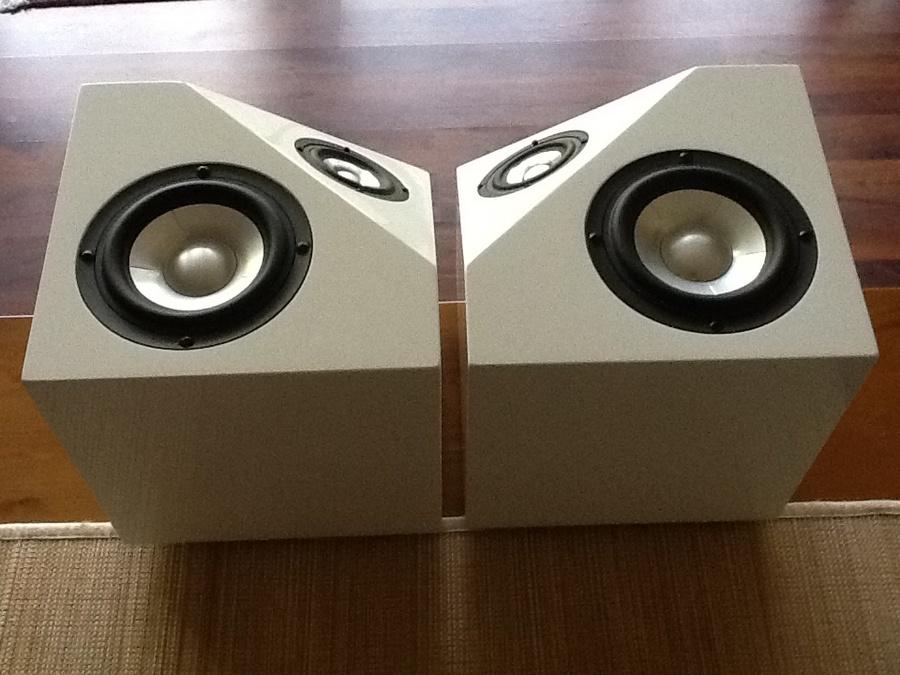 The performance is very good, especially considering the size and squat form they easily blend into a listening room. I normally use a powered subbass unit in my system, but this was not needed, as it seemed like overkill and was switched off. I listened to a range of my albums, including female vocal, acoustic instruments, complex fusionjazz, deep bass (yes, predictably, Massive Attack's Mezzanine), and a couple of my goto recordings, namely Dire Strait's first album and Brothers in Arms, and Rush’s Moving Pictures. I found the Minis to be very listenable, and instrument subtleties are easily discerned, yet they sounded like... loudspeakers. I sense a subtle something missing such that the overall sound isn't quite natural or fully realistic, but maybe this isn't sensible to expect from a very petite cabinet/driver combination, and at this price.

Audio system components have a characteristic sound (timbre) and a characteristic performance when heard operating in a listening space speakers more so as they compress and move the air that we hear, and couple with the room space and its contents. The Omuni Minis may well be tuned to the auditory acuity and preferences of the designer in his favourite listening space, but how will they sound elsewhere to others? To me they sounded a little 'tight'; the soundstage rendered was flat, without depth in the spatial separation of instruments and voices, and thus not rendering music much beyond 2dimensions. Percussion didn't hit quite hard enough and highs were rather tamed, lacking full metallic shimmer and impressive dynamic range. Overall, they were a bit 'shouty' when played loud and didn't have the delicacy that I get from my open baffle fullrange drivers. I raised this with Eric and his comment was that "The highs are all there but without the prominence of many dome tweeters caused by break up modes. This smoothness is often described as you have done until we stop listening for the harshness or breakup we are all used to. Some female listeners have described the Minis as bright". This just further demonstrates that audio equipment should be heard as the most crucial part of the selection process, as preferences are subjective and dependent on situation (most I realise that most music fans have never heard fullrangers on open baffles). I agree with Eric that written specifications can't tell the whole story because they don't include the listening environment and the subjective listener.

The Omuni Minis did consistently provide a satisfying listening experience in the circumstances of my audition although that does not guarantee the same for anyone else. They are not 'neutral', they have a particular tone, without the boxiness of the more popular tower frontfacing configuration, and always highly listenable, but not quite accomplishing for me the natural musicality that makes extended listening an effortless and delightful experience. The awareness of an added tonal character was everpresent, so the musical performance didn't quite emanate flawlessly, and so the Minis don't musically recede into the background, although this will be compensated by the subtlety of their physical form in most home settings. So it has to be said, all speakers are a concoction of solutions and compromises to the challenges of transducing electrical energy into sound waves, and the Minis are a stylish and effective ‘immersive’ alternative to conventional tower and bookshelf speakers. If you are wanting to add compact highly listenable speakers to a music system, then the Omuni Mini is worth considering. I quite like them stylistically and can see them sitting well in a modern home setting, yet a 'hifi' friend visiting recently looked at them and said that they were the kind of speaker you would hide in the corners of the room. 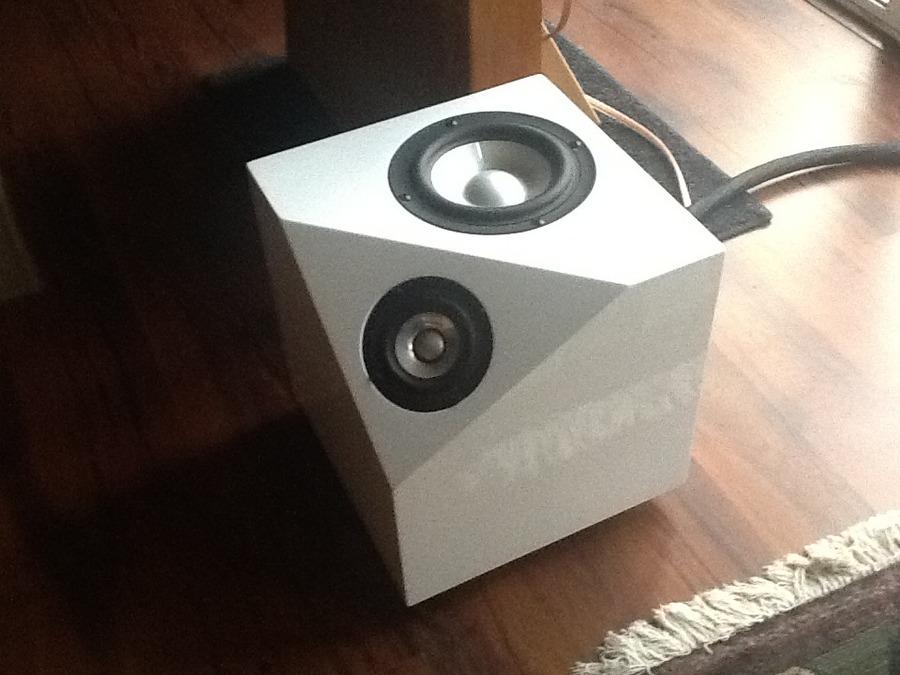 OK, so tonally they are not to my liking, and I was happy to go back to the 'airiness', dynamics, presence, and threedimensionality of my open baffle fullrangers, yet the Omuni Minis are very compact and stylish in a modernist way, and for many domestic settings will discretely provide a voluminous sound. They are a welcome alternative to typical frontfiring cabinet speakers. On a practical note, the drivers are visible and thus accessible with no cover, so these speakers are not for users with children or pets who might stick damaging things into the cones.

Thanks to Eric Cross for organising an extended loan to enable a thorough audition.

The Omuni Minis have a big brother true omnidirectional Omuni, also designed and produced by Omuni Audio; details on the website.