Electrostatic legends from the Eighties 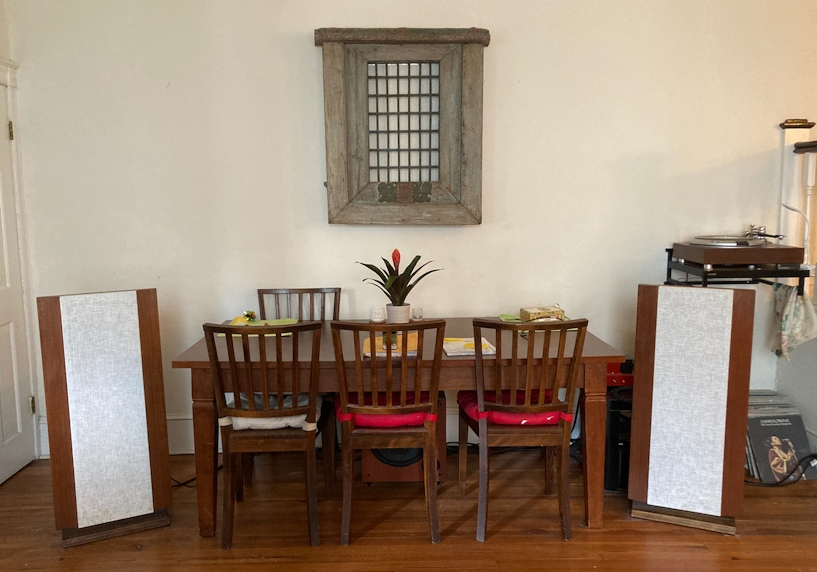 When we talk about vintage hi-fi, we're often referring to audio products of the 1960s and before, even back to the 1930s and the SETs and theater horns used to play back the soundtracks of the first "talkies." But nostalgia doesn't have to reach that far back—even the 2010s are now retro. So let me take you back to the early 1980s, in particular these Japanese electrostatic speakers named after the year of their first release, the Stax ELS F-81.

I've actually followed a SET/horn path for most of my audiophile career, using Decware amps and horn-loaded Lowthers for years now. But a few years ago, I got an urge to try Stax headphones, which led me down a rabbit hole now 4 pairs of electrostatic headphones and 3 accompanying amps deep. And that brought me back to late night listening sessions - not as background music, but just sitting and listening to especially Laura Nyro, Joni Mitchell, Sandy Denny, Rickie Lee Jones.

So it was with interest that I came upon an ad for a used pair of the Staxes listed by a well-known dealer in electrostats/tubes/exotic cartridges/etc. They'd been refurbished by Electrostatic Solutions in Kansas City, MO, USA and brought up to factory spec. I liked the look of their clean mid-century-modern lines, and since I lived an hour away, I was able to audition them and if I liked them skip the shipping. What I heard was a crystal clear, immediate, engaging sound on my favorite singer-songwriters and some slightly more headbanging music as well.. Needless to say, I brought them home with me.

Stax's first products came out in Japan in the 1950s. They are best known for their headphones, both electrostatic and electret (those not needing an external charge) and accompanying amps and accessories, but Stax has also produced tonearms and cartridges, power amps, CD players and DACs, and electrostatic loudspeakers. These were first produced in 1964 and continued through the early 1990s. In 2011, Stax was acquired by Chinese speaker-maker Edifier; though since then Stax has focused on headphones and their amps, Edifier appears to have given Stax staff a free hand in designing products they deem appropriate.

I decided to build a new system in the living/dining area rather than integrate the Staxes into my upstairs study system. I was a little concerned with the space, though. The Staxes are supposed to do well in smaller rooms, and the living/dining area is more like 120 cubic meters, with two adjoining rooms without doors. And they have a weird impedence curve: "The Stax ELS F-81 is one of the most difficult loads one can find. From 40Hz-800Hz the impedance is well above 100 ohms. Around 180Hz the impedance peaks around 512 ohms!" (kentaja on Audiogon)

Fortunately the dealer was willing to let go of the pair of Emotiva XPA-HC1s he'd been using to drive the Staxes. These "High Current" solid state amps with a switch mode power supply deliver 300 W RMS into 8 ohms and apparently do OK driving a 512 ohm load. And the Emotivas work fine in the room; I turn the volume on my Audio Tekne preamp (not one of the high dollar models) up to 12 o'clock for late night listening or 3-5 o'clock when everyone's out of the house.

I've got the Staxes on either end of the dining table (gotta go with the existing furniture here). They're one meter out from the long wall of the room, toed in 20 degrees, and I sit 2-3 meters back from that. The panels can be titled vertically and tightened in place with allen bolts, but they're hard to tighten, so I imitate the dealer here too, inserting a can of cat food (4 cm tall) between the panels and the bases to give them a 6 cm backward tilt. Also on the dealer's recommendation, I put 3 Herbie's Soft Fat Dots—size large—under each speaker.

I'm using generic power cords to energize the panels and nice Western Electric 16awg speaker cables I found on the 'bay. As the bass on these is not as forceful as it might be, especially in my large room, I'm augmenting with a Nola Thunderbolt, with the crossover around 60Hz and the level at 8 o'clock.

By the way, my spouse likes the look of the Staxes, too—when I first got them she'd often comment how pretty they were.

Is pretty, too. Pretty amazing, that is. The coherence top-to-bottom reminds me of my single-driver Lowthers. This makes sense because an electrostatic diaphragm is a very large single driver. Both speakers come across with an easy, open quality like they're hardly making an effort to deliver the sound. Bass is fine and well-integrated with the speedy Nola. Some would say I need stereo subwoofers, but one is enough for now.

Like I said, it's the female vocalists many from the 60s and 70s that do it for me. The audiophile compulsion has always been a means to an end: to hear Joni Mitchell's or Sandy Denny's deeply felt emotion transmitted directly to me. I'm going for an out-of-body experience, where I'm in the mind-space of the performers. And that's what the Staxes do; it's uncanny how though I can tell I'm not listening to live music, I can hear the singers' joy and their pain and feel it too. This is what drew me to the SET/horn combo in the first place, and it definitely delivers the goods. But isn't it great to have two systems of different topologies to alternate between?

Of course, I listen to a lot of music other than the weepy variety, too. Since I got the Staxes I've been buying more jazz vocalists, Billie Holiday, Sarah Vaughan, Ethel Ennis, Helen Merril, Cassandra Wilson, even Chet Baker. (Did I say I listen almost exclusively to vinyl —no streams for me and not many CDs, rips or downloads.) But loud music sounds great on the Staxes too: the Band, Bjork, Beach Boys, Beatles, Animal Collective, Japanese Breakfast. As I've suggested, it's the microdynamics, the inner detail that do it for me —not that the Staxes don't do the macro, but it's not at the cost of the micro. I do listen to soul and R&B mostly on the SET/horn system, though. You could dance to the Staxes, but they sound better sitting down.

That's the one caveat, in fact. I'm often moving my chair back and forth to center the stereo image. With no balance control on the preamp, it's a little like a head-in-a-vice effect. There's a couch about 4 meters back from the Staxes, but sitting on it, you lose the magic. On the other hand, sitting on the floor with your back to the couch works OK. I'll have to investigate with friends as the pandemic finally (fingers crossed) lets up.

So the F81s (in combination with the Emotiva amps, of course) offer a clear and compelling window on the music. And just like with a (vintage) window, when approached at an angle rather than straight on, the clarity suffers. I didn't mention soundstage, and this is also spectacular on the Staxes compared to the SET/horn system. Maybe it's the larger room, but I know it's also of the new-to-me Sperling tonearm, subject of a future review. Oh, yeah, and the JVC TT-81 turntable, too. Guess what year it first came out? (OK, it was 1976, but close.)