How many times have we spoken about WAF, complaining about our mates' skepticism for our favourite game? Now it's just the "wife" who felt in love for those beautiful post-modern sculptures by Audio Physic. It must also be said that everything suddenly ceased when I told her the price I should have paid to keep'em. And, since she's a wise woman, she took about 1.5 seconds to realize that maybe this was not the case, and patiently helped me with the packing procedures to send them back to our kind friends from A.R.T.

Speaking about their physical presence, Tempo's III series are two one-meter-tall boxes, with a backward tilt of about 10 degrees (7, to be precise), made by German brand Audio Physic. They're very well built and perfectly finished (and I mean perfectly in the most German way possible). Really charming.
They come in clear cherrywood, with practically identical veneers for both the speakers, that stand on two spiked bases. These bases, once screwed to the main body, provide for a reflex 'slot' invisible from the front.
The cabinet sports two separate inner volumes: one for the pneumatic (sealed) loading of the tweeter, and the other one for a triple chamber for the two woofers.
Once placed in the room, their thin and slim figure makes them almost disappear, with an easy "harmonization" with your listening room furniture.

The drivers consist of two identical woofers, with reversed centre cap and a stiff and very light Neomex diaphragm, crossed over with two different intervals - one acts as a real woofer, the other one, free from the bass job, smartly copes with mid and low-mid ranges. I think that with a specialist midrange driver, one could have had something more in the low-mid range, that, if compared with the extreme accuracy in the rest of the spectrum, is the point where there's something to cricise.
The coupling rings are shaped so to follow the edge of the cabinet, and have room for 6 bolts - if you unscrew 2 of them for each woofer, you make room to place the support sticks for the protection grille, that only comes as an option.
On the low back side, we find a metallic board with one pair of binding posts (no biwire, please!) with the usual CE-friendly plastic cap. The crossover is mounted behind that board. 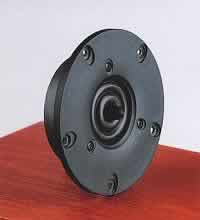 The tweeter, yet, is real news with these Tempo III's. It's a driver featuring a very particular dome structure (take a look at the picture), with a little, yet in very evidence ogive, for phase purposes. It works in a separate chamber and its specs describe a driver sporting an upper limit of 60.000 Hz. !
I do not know what's the level of knowledge about extra-auricolar sound conduction and perception, but it seems almost certain that, by mean of our head bones and our good ol' 70% of water, the meaning of the "audibility" of the classic "20-20.000", sooner or later is going to be revised. However, it would be a mistake to think that, with the declared 60.000 Hz spec, Tempo III may be aggressive in the high range. Indeed, extension does not mean harshness, with a skillful designer. In fact, the extreme high range sweetness is really one of the most characterizing point of the Tempo III.

Those speakers' room placement was surely the most dificult of all the speakers I have tested. I had to use all of my tricks before reaching a satisfing placement that - guess? - is not very far from the one suggested by Audio Physics itself into the booklet, to place the speakers along the long side of the room.
To enjoy the best with Tempo III's exceptional ability in perspective reconstruction and to keep a good tonal balance between the high and the mid range, it's fundamental that the speakers are 'toed in'. This means you have to sit at a distance (between the chair and the speakers centre line) slightly longer than the half of the distance between the two loudspeakers, and with the tweeter precisely firing toward your head.
Bad positioning, with the Tempo III's, does not mean they sound just a little worse - it means you miss what they are really capable of...
Sure, the best listening place (the "sweet spot") is rather reduced and if you make an even little move, you loose something in terms of holographic precision. I don't consider this a positive feature - after all part of the pleasure of hi-fi is shared audiophile listening. If you move from the sweet spot, you suddenly begin to notice some alteration, that weaken the spatial reconstruction.

First of all, the burn-in. I let them run for a good bit o' time, then I recorded my first impressions, with half a mind to their impressive specs - a declared reproduced range from 34 Hz through 40KHz, a given sensibility of 90dB/1w/1m and a 4-ohms impedance.
Listening to the speakers positioned as referred to the booklet, after countless tries and moves, I was first pleased by their amazingly wide soundstage - of a really highest level, luminous and detailed, and very developed into all three dimensions. The loudspeakers just disappear, the background wall moves further, and the room, keeping your eyes shut, enlarges. All the rest comes somewhat second in the list of priorities. There is that slight "soulessness" and lack of warmth when it would be musically desirable. The two triple-reflex-loaded 16' woofers sport an fine extension and control. Yet, I expected something more in terms of "punch".
I think that to be taken away by the music you necessarily need one of those two things - either the "physical" participation (e.g., my listening of a pair of Tannoy Berkeley made several days ago), or the abilty to reconstruct a virtual environment where you can lose yourself.
The choice is up to the listener. He, based upon his personal tastes, will prefer one or the other. Tempo III stay in the second ones' field, and do their job well. Someone who wants a kick-in-the-ass, must look somewhere else.
I made my first listening session with my integrated tube amplifier and an analog source - I won't say anything more about the soundstage, I believe you already understood we are speaking about excellence.
The dynamic performance is good - with low levels you lose almost nothing and at high levels you notice little compression. Their ability in detail reproduction is very good, no loss of fine detail, as says the brand's motto.
I made my second listening with a mos-fet pre/power combo in a price class similar to the one of my tube integrated. the Tempos felt at home even with that combo, sporting more grunt and decision, yet with a slight more "cold" and fatiguing sound. However, I can't exclude that, with absolute class solid state gear, the results may be higher than those obtained with tube amplifiers.

Just to summarize, here follows a table with pros and cons, but, beyond those schematics, I also want to figure a type of system and of listener that would well match the Tempo IIIs.
I would see them fit well into the living room of a mostly acoustic music listener, who generally listens at medium levels, employing a good-power, fine tube amplification, that, with its sweetness, can give a little bit more "soul" to those speakers.
A strong solid state amplification would improve their their so-so performance in terms of punch, extended dynamic range, etc., but would move still further away from that vital and hot breath that we expect from our favourite music.

Beauty and build care
Detail and wideness of acoustic scene
Extended and controlled bass
Sonic character is kept even at high levels
Not coloured sound
Positioning not too rear-wall dependant.

Room placement does not allow "approximation" - a lot of space it's needed between the speakers and from the side walls
Listening out of the "hot spot" excessively penalyzed
Clear midrange, but with lack of "body"
Mid-low slightly recessed

As usual, let me finish with a hartfelt thank-you to A.R.T., for having given us the pair of Tempo IIIs for this test. I also take this occasion to express them my best wishes to their official site, just arrived on the Net.