“We have the smallest one!” i.e. size doesn't matter 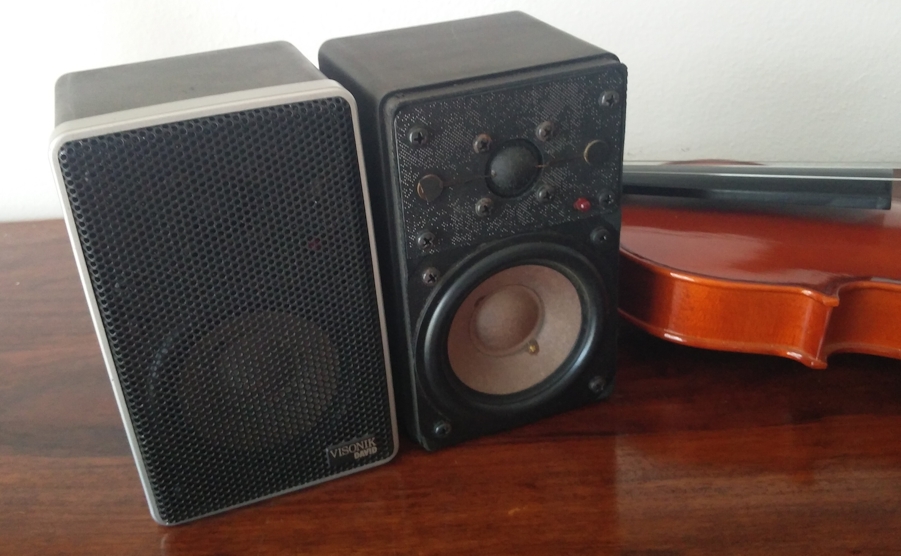 Answers: Actually, these two giants, the LS3/5A and the David, are quite different, because of the different size, a David being approximately one half of a LS3/5A [165 x 105 x 105mm vs 305 x 190 x 165mm (HxWxD)]. This should give you an idea of how small these speakers were. At that time, they appeared ridiculously small. Moreover, they broke a world record: they have been the smallest speakers to meet the DIN 45500 HiFi requirements (more on this later). In other words, without the David, the idea that speakers had to be huge in order to sound decently, would have survived for a long, long time. Yes, the LS3/5A heritage helped a lot, but the David were an unbelievable commercial success.

Brief history of the brand

What about Visonik? This was actually a brand of Heco (Hennel-Company), a company founded in 1949 by Gerhard Richard Hennel and his wife Susanne, in Schmitten, Germany. They designed and built speakers for cinemas and restaurants. After Hennel's death in 1972, the company was sold to the British Rank Organization by his wife. Finally, Bruns acquired Heco in 1979. After a few other financial issues, and the Berlin Wall fall, the brand has been finally acquired by Magnat Audio-Products GmbH. The visonik.de website now redirects to Audium.

The first David loudspeakers to hit the market were the Model 30 and 50. They had a sturdy, acoustically sealed aluminium cabinet, with a 4" (100mm) woofer (T92) and a 3/4" dome tweeter (D502), made by Heco. These drivers were of extremely high quality, with beefy ferrite magnets. The woofer had a durable rubber surround and a stiff paper cone. The tweeter dome was made out of impregnated silk. The crossover network was a 12dB/oct circuit, built with good components. The inside of the cabinet (1 liter volume!) was entirely stuffed with acoustic damping material. Despite their diminutive size, these speakers were extremely solid and heavy, weighing in 2.1 kg each!

In 1977 the DAVID 50 was awarded the Japanese Export Product Award of the 6th Audio Grand Prix for innovative developments, and this was the first time a European component was to receive such a prestigious prize.

The 502 model under test, released shortly after the 50 (think of it as a 50.2 or a 50 mk2), cured a well-known problem: since these speakers could handle high power at a very low level of distortion, customers were inclined to force them well beyond their capabilities. As a result, many tweeters broke during the first years of production. Hence, the 502 model was equipped with an overload indicator (a red led in the front) that warned customers that the limit of the drivers was approaching. 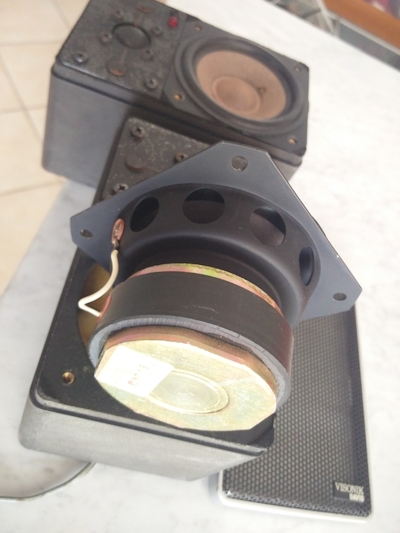 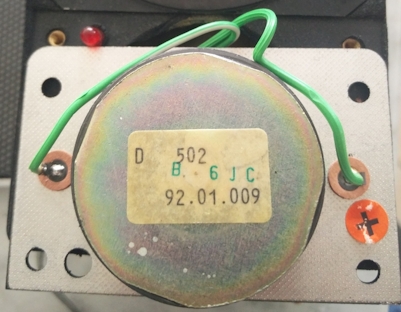 One year later the David was introduced, the US firm Miller & Kreisler designed and released a subwoofer, called - guess what? - Goliath, which became the ideal partner for these small monitors. A new concept was born, that of sats & sub combo! The David & Goliath set sounded so well that many large loudspeakers of that time were put to shame. Quoting directly from the M&K website:

While other manufacturers were building audio dinosaurs in the form of coffin-sized boxes, M&K led the way into the future with the world's first satellite/subwoofer system, David & Goliath in 1976.

After these first models, new series of David were developed (5000, 6000 and so on), but I will concentrate on the first original Davids, that is to say the 50 and the 502. I've been lucky enough to find a pair of mint 502's, with original drivers and still perfectly working rubber surrounds. 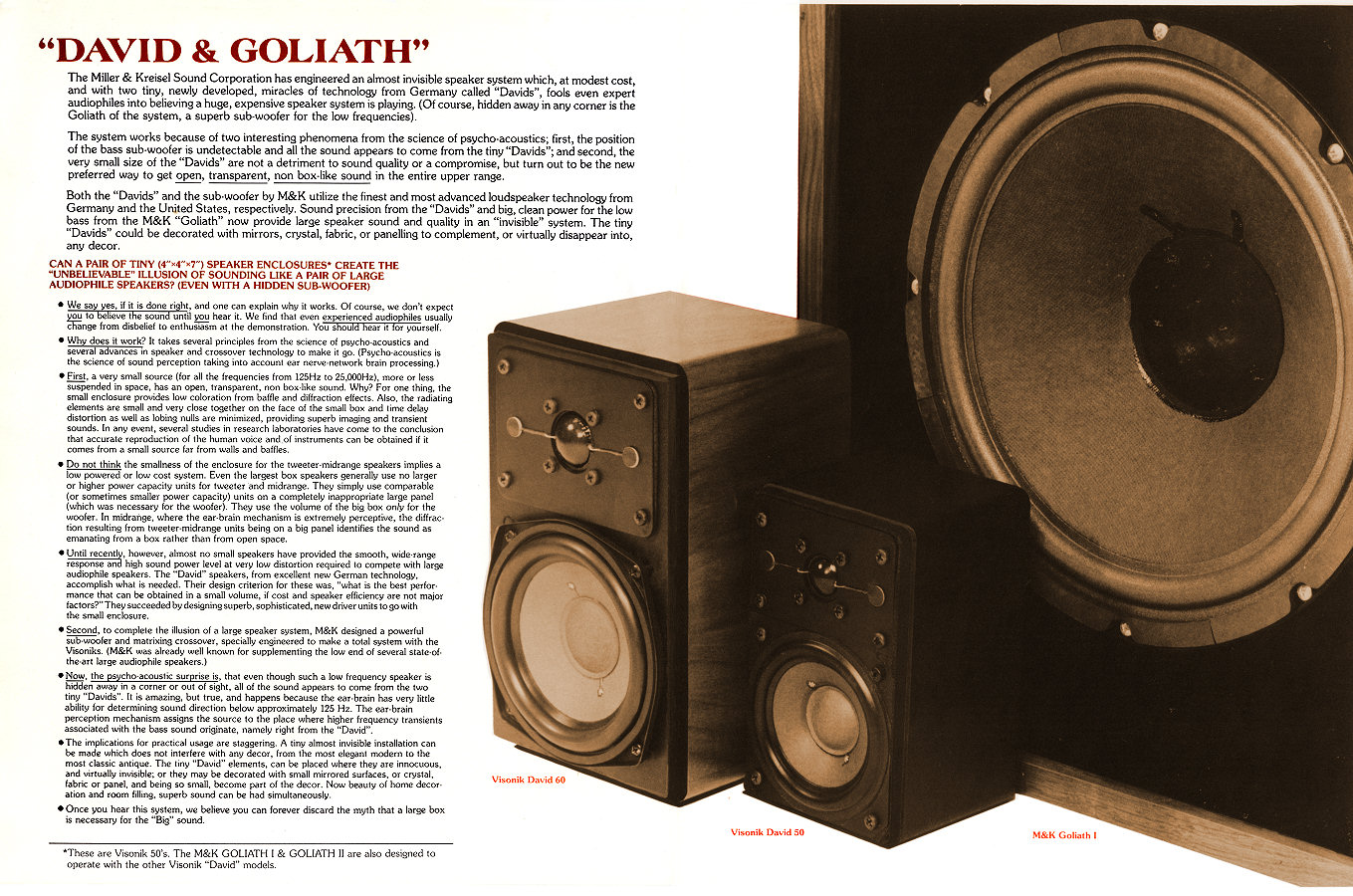 DIN 45500 was a German DIN standard for the minimum quality requirements in household audio equipment. It was intended to define the terms High Fidelity and Hi-Fi according to this standard. It was replaced by the EN 61305 standard in 1996, which restricted itself to the measurement methods and performance characteristics, omitting the outdated minimum requirements. The DIN (DIN stands for "Deutsches Institut für Normung", meaning "German institute for standardisation") released this standard in 1966, you can find all the details here, listed component by component (amps, speakers, turntables, tuners etc.). For loudspeakers, the requirements could be satisfied only by rather large cabinets and drivers, and the David was the first small design to meet them. In the figure below you can see the tolerances beyond which the measured frequency curve may not deviate. For stereo pairs, the two speakers should not differ from each other by more than 3dB from 250Hz to 8kHz. Moreover, a speaker should be capable of developing a 96dB SPL at 1 meter of distance (regardless of power input). Non-linear distortion at the specified output should be <3% from 250Hz to 1kHz and less than 1% at 2kHz and above.

“We have the smallest one!” i.e. size doesn't matter 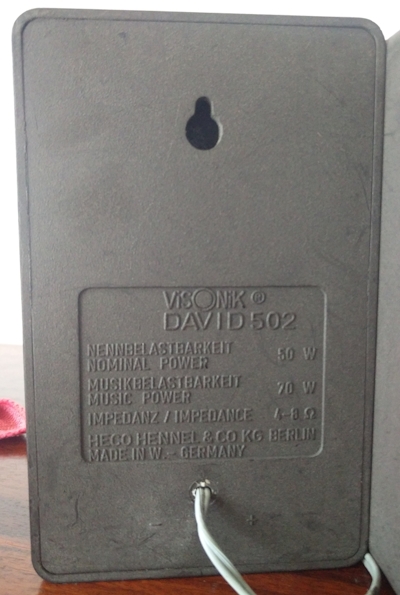 Nowadays, we are familiar with small loudspeakers that sound incredibly good. At the time the David was introduced, audiophiles laughed at those tiny boxes! Yes, they laughed hard, until they started listening to them. Actually, these small bookshelf speakers were, and still are, a treat. You wouldn't believe your ears, seriously. And I'm pretty sure they sound better now than then, because they weren't an easy load for any amplifier. Low sensitivity, together with low impedance, was a nightmare for the majority of consumer amplifiers of that time. Hence, it was hard (and expensive!) to make them sound right, the way they could.

I wasn't expecting much from a 4" woofer trapped into a 1 liter sealed volume. Bass? What bass? Placing the David close to the rear wall you'll start wondering where all that bass comes from. It is tight, fast, powerful and even reasonably deep (let's say 55-60Hz! They claimed 45Hz). Moreover, these woofers can sound unexpectedly loud, if required! Yes, they need watts, but they can deliver a bass range that is surprising even by today's standards. Oh yes, the Lonpoo LP42 - just to name a champion in its league - delivers a better bass, but it is almost twice the size of the David and has a reflex-ported enclosure that helps a lot in the lower bass.

Mid and high range are brilliant, not as crystal clear as we are used to nowadays, but it's still an incredible performance: voices, cymbals, strings...they come out of these tiny boxes with an incredibly low level of distortion. The (high) quality of the drivers plays a role here, but the cabinet contribution is of paramount importance. There's no way for a MDF cabinet to be as sturdy and resonance-free like this bullet-proof alumimium block. This absence of colouration helps both keeping the level of overall distortion very low and building a stable, big and well focused 3D soundstage. Nobody cared about soundstaging in the Seventies, but these babies simply disappear, leaving the space surrounding them filled up with music and singers.

The absence of resonances pays its dividends when it comes to analyse the dynamic performance of a speaker. The energy of the movement of the driver's membranes doesn't get dissipated in terms of cabinet deformation, hence all the energy from the amplifier is entirely transferred into the speakers and delivered to your ears. Each and any vibration of the cabinet dissipates mechanical energy (hence heat) and compromises overall dynamics. Hence, the Davids sound fast - more than you'd expect - tight and articulated. And they can sound surprisingly loud, remember the 96dB @ 1 meter requirement of the DIN specs! Of course, these are very small boxes, and the 4" woofer can't do miracles: try not to overload them, as they don't deserve it! When the red overload light starts flashing, turn the volume down accordingly. It is normal (and it does not generate distortion nor failure) if you listen to the speakers with the red led constantly flashing, following the rhythm of the music. In any case, have a close look at the woofers movement and avoid them bottoming out.

Summarizing, are these speakers worth their commercial success? You bet! These were game changers almost 50 years ago, and are absolutely enjoyable today. A small room, a desktop environment and a good amplifier are mandatory. Of course, partnered with a subwoofer, they can fill up even large rooms. There's nothing really vintage in their performance: they sound lively and modern like you'd never expect. Yes, modern bookshelf speakers can sound more transparent and airy, and a pair of LS3/5A might sound sweeter, but at this size these tiny monsters are still hard to beat. I still have to find a speaker that sits in the palm of my hand (remember: 10x10 cm footprint!) and sounds this good.

The first series of David periodically pop up on second-hand marketplaces/stores. Their price can vary, depending on condition. It is hard to find speakers with original drivers, as tweeters had a tendency to self-destroy and replacements are not easy to find. At least, rubber surrounds for the woofers are still available, as a DIY kit. Unfortunately it is not uncommon to find Davids with non original woofers. If that's the case, leave them where they are. The cabinets are almost impossible to destroy, light scratches can be fixed easily. Sometimes the Davids have been slightly modified to use binding posts. The original cables entered into the cabinet directly (see pic at the right). In any case, such a modification won't affect performance and will make the David easier to use with modern speaker cables.

Remember to allow a long break-in period: if not in constant use, the driver membranes need some workout before performing at their best.

The guys who designed these marvels were pure geniuses! With the technology and the materials of that time (and the beliefs!) they were able to think differently and design a tiny loudspeaker that sounds astonishingly modern even by today's standards. At least once in a lifetime, you should listen to a pair of Visonik David (50 or 502). You won't regret it!