My original objective was simply to build some DIY interconnects in order to explore the potential for better performance than what I was using at the time at low cost. This article is being written 2 years after the cables were built and put in service. There is nothing new or innovative in my finished product, it borrows heavily from designs I found here and there on the Net, notably the excellent articles by Thorsten Loesch. All of the materials used were sourced in Canada.
The thought process that brought me to start this project will be explained followed by a discussion of the basic design objectives that were adopted and the configuration adopted in order to meet these objectives. The material selection is discussed with some explanation of the cost-benefit decisions. A total cost breakdown is provided followed by a discussion of possible design alternative that could be tried.

There came a time in the evolution of my system when I had gone through a lot of upgrades to all of the components with the exception of my interconnect cables. My Dynavector DV 507 MK II tonearm came with its cable which I had no reason to replace. I had also been experimenting with a TaraLabs RSC Vector 1 cable. The rest were a mixture of low cost big box store style products. Mostly of the coax variety. I dissected one of these budget coax cables once out of curiosity, the centre conductor was so small and fragile it looked and felt like the thread one uses to sew a button on a shirt!

So, I decided to explore improving this potential weak link in my system. I say potential weak link because at the time I really didn't have any solid experience on the impact an interconnect cable can have on the overall system performance. Of course, like everyone who is interested in high-end audio, I was exposed to the mountains of articles, reviews, hype and pseudo-science available on the subject. I decided to go the DIY route because I had a great deal of difficulty swallowing prices of $450 (sometimes much more) for two pieces of wire 1 m. long based on hocus-pocus sales brochures and explanations from salesmen.

So where to start? I wanted to approach this with some method and some science. My starting point was the excellent article by Thorsten Loesch posted on this web site, The Naked Truth About Interconnect Cables. My prime objective then became to adopt a design that would provide a low capacitance. So, my basic design thoughts were:

Thus, my basic concept became Teflon insulated spiral conductors wrapped around a Teflon tube. The tube provides the spacing and the air dielectric. The spiral wrap avoids parallel conductors and ensures that the conductors cross at a significant angle to each other. Using teflon insulated conductors also reduces the dielectric absorption in the insulation. In my opinion, the audibility of the impact of dielectric absorption on the cable performance is debatable but given a reasonably inexpensive option to use Teflon insulated conductors, why not? Another important consideration in the choice of a symmetrical spiral wrap is of course the reduction of the susceptibility to external EM field energy.

After considerable searching I found a supplier for the small Teflon tubing required for this project. It came from an internet based audio DIY shop north of Toronto called Take Five Audio. This source also sold Ohno, single crystal, cryo treated pure copper wire with Teflon insulation. I found the price to be reasonable so I placed an order for both the wire and the tubing. Dr. Atsumi Ohno, the inventor of the Ohno Continuous Casting process, passed away on April 13, 2017 at age 92.

The next design choice I had to make was how many conductors to use. I have to admit that at this point I didn't apply any scientific analysis, I made a quick decision to go with 4 conductors of # 24 AWG. (2 per side) Again, economics influenced the decision as the cost for 4 conductors instead of 2 was not a significant issue for the overall project cost. Now, 2 years later, I am questioning the number and size of the conductors I chose to use. Given that these cables are passing such a tiny signal, and that the skin effect doesn't kick in on a pure copper #24 AWG solid conductor until above 68 kHz, (taken from multiple reference sources) a 2-conductor cable seems to be a more logical choice.

To Shield or not to Shield?

Connectors: there is a huge selection of RCA connectors to choose from with an equally huge price range. I selected a connector of good quality (and reasonable price) with the added feature of being cryo-treated. I could have saved some money by choosing the same connector without the cryo- treatment but the price difference was only about $7.00 for a set of four. I have read the arguments for cryo treating connectors and frankly I am not convinced. However, this cable project is basically an attempt to compete with the $450. retail cables and I was significantly under that cost with my DIY cables notwithstanding the cryo treated connectors so I decided to use them.

It took some practice to get the knack of wrapping the 4 conductors in the right order, with the right spacing and tension. Also, I decided to alternate the over and under conductor in order to conserve as much symmetry as possible. The Teflon tubing is thin and somewhat easy to kink, my solution was to clamp one end of the tubing in a heavy vice and to tie a string to the other end so that I could stretch it straight by tying the string to a shelf unit thus keeping some tension on the tubing to stop it from bending while I wrapped the wires.

The result is a rather large diameter cable and this made it necessary to drill out the end of the connector shell so it would slide over the finished assembly including the heat shrink applied to the last few inches for protection of the conductors. Note that the fit was quite tight and the connector shell actually scratched the heat shrink sleeve. Larger diameter connectors are available however they seem to come with a rather crazy price tag. 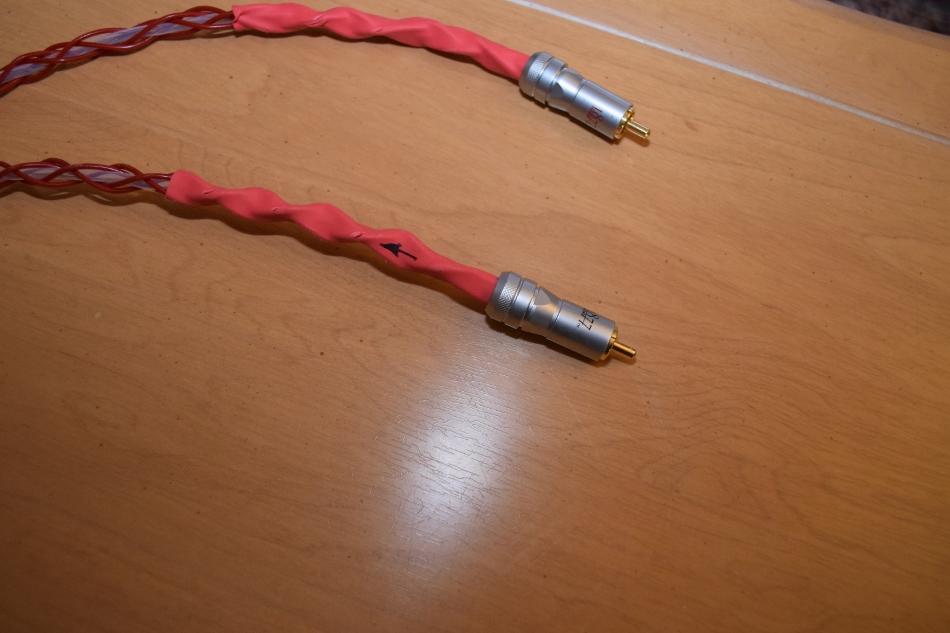 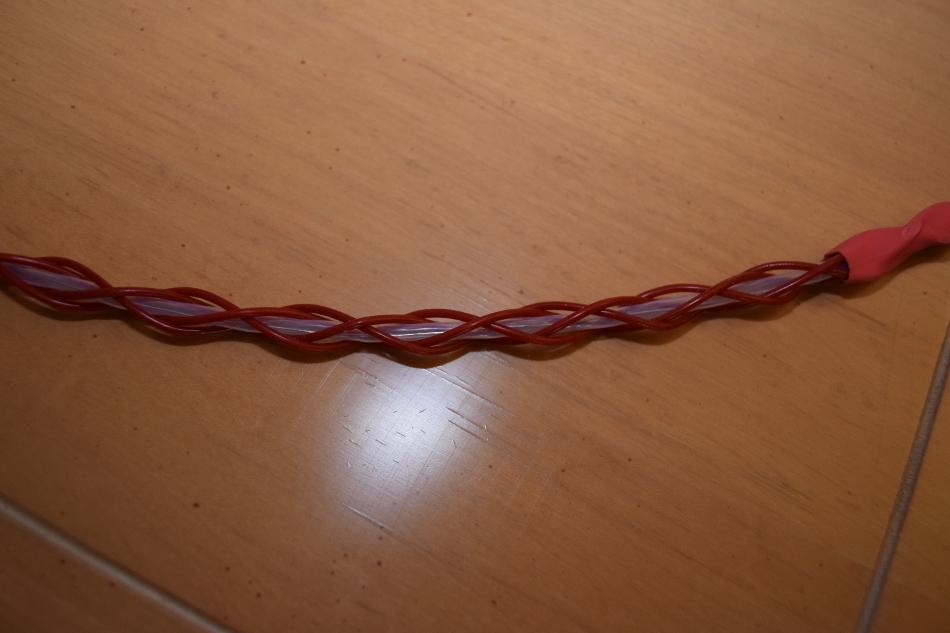 The final cables measured 94 cm long, the total loop resistance was 0.02 ohms and capacitance was 70 pF. In the listening tests, the DIY cables clearly outperformed the big box store cables I was using at the time. So, my first conclusion, is that interconnects do matter. The real test then was how do these cables perform against my original adversary, the $450. audio shop cable. The easiest test for me to do was to perform head to head tests against my TaraLabs interconnects which originally retailed in 2005 for about $300. US. Of course, I couldn't do a blind test because I am the guy who is switching the cables. Someday I will have to try it blind with some fellow audiophiles.

The DIY cable performed easily as well as the TaraLabs cable and I would say slightly better. The principle attributes being clarity, dynamics and naturalness. This certainly is a reasonably expected outcome as we are comparing two cables of very similar construction; pure copper conductors spiraled over a Teflon tube. So, I am quite happy with the results of this project as I now have excellent interconnects at a fraction of the price I would have paid at an audio shop.

This DIY project established that interconnects do matter, some are better than others. It also establishes that one doesn't have to pay several hundred dollars to obtain excellent interconnect performance if one goes the DIY route.

As noted in the article Some thoughts on interconnect design and frequency response, an interconnect cable with a capacitance value that yields a frequency drop off of less than 0.4 dB at 17 kHz probably meets the hearing capability for the vast majority of audiophiles. The DIY design described in this article comes in at 70 picofarads which means no degradation in frequency response (in dB up to 3 decimals) up to more than 40 kHz. From past experience, I would expect a Shielded AirCoil cable to yield a capacitance of about 150 picofarads per metre which still gives no degradation in response to over 30 kHz.