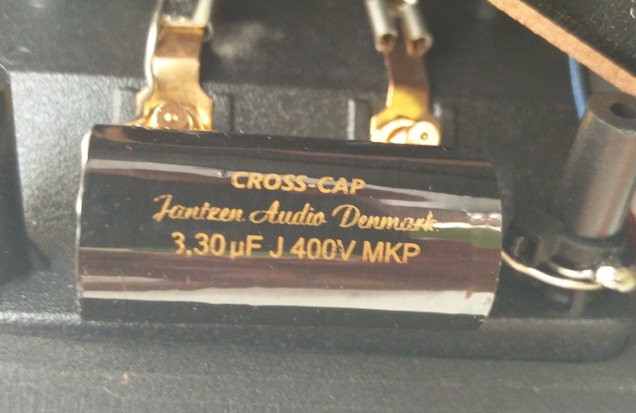 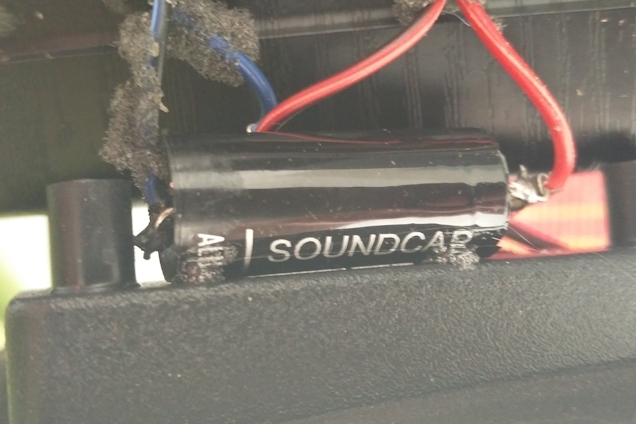 Is it always for the better?

In Part I of this article I introduced the pros and cons (if any) of a crossover recapping procedure. Now I will investigate a quite surprising case-study. One might think that, in order to be able to detect the subtle differences between capacitors in a crossover, one needs to use extremely revealing and sophisticated speakers. Well, that's not really necessary. Indeed, I decided to prove the impossible: detecting caps' differences on a 80€/pair bookshelf loudspeaker, the Lonpoo LP42, a best-buy that has quickly become, after our review, the best selling small loudspeaker on Amazon. Actually, the LP42 punches way above its weight and puts the competitors into shame. It is an unbelievably good sounding speaker for such a silly amount of money. It makes use of a single, cheap, tiny, ugly cap as crossover network. Just a cap on the tweeter, nothing else. Not a coil or a resistor, just a small 3.3uF cap. The midwoofer is left unfiltered (mechanical filtering, that is).

Hence, upgrading its ugly cap should be the safest and the shortest path to improve its sound, right? Let's see. 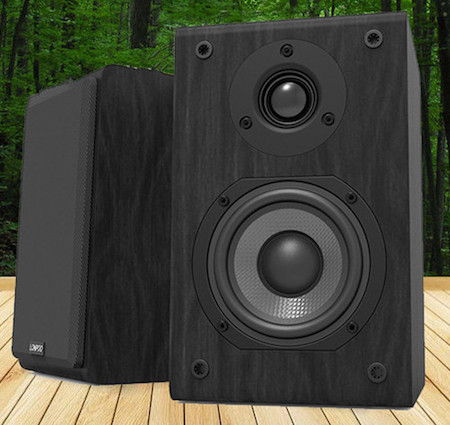 There's a method in my madness

Three pairs of LP42's have been picked up, and they all sounded the same, if left stock. Then the cap has been replaced on two of the three pairs: one pair has been upgraded with a Jantzen Cross-cap and the other pair with a Soundcap AZX. The first cap is well known among audiophiles, since it is expressely intended to be used in crossover networks (Cross-Cap, the name speaks for itself) while the second cap is something more exotic, used by exotic brands (for example, Sonus Faber) and it is not available to public retail. They just sell to HiFi companies and professionals, so don't ask.

The Cross-cap is the entry-level of Jantzen MKP capacitors, and uses high quality metalized (ZnAl) polypropylene foil, produced and metalized in the EU. The dielectric insulation is also polypropylene. According to the company, these caps “do not make any unpleasant distortion on sound and do not colour the sound.” Here you can download the PDF datasheet.

The Soundcap AZX (here the datasheet) is made in Italy by SET srl and is an axial polypropylene film cap with metalized heads with ALUMINUM/ZINC alloy for the best frequency response in a non-inductive construction. The Cross-Cap and the Soundcap have the same 3.3uF capacitance at 5% tolerance and 400V operating DC voltage. In other words, they are very, very similar designs.

I've been able to perform this test thanks to one of our faithful readers (and friend), Marco Gatti. He supplied the two modified LP42's and caps. The same mod can be applied to the active version of these speakers, the LP42X.

Of course, I was expecting (see our article on expectation bias) the two audiophile caps to outperform the basic El Cheapo cap used in the stock LP42. The tests have been performed with the help of my friend Ettore, who is a music composer and orchestra conductor. The three LP42's looked all the same, just a small sticker in the rear identified which cap had been installed. My friend was completely unaware of which LP42 he was listening to. I exchanged the three pairs after each and any track and asked for his findings (yes, it has been tiring). I had already performed my personal listening tests alone, days before, but anticipated nothing to him. Not surprisingly, his findings were exactly like mine. All the tests have been perfomed using an extremely revealing and transparent HiFi system. N.B. Your mileage may vary, especially if you use a budget system (differences might be inaudible).

Stock LP42: the usual surprisingly good sound, a bit treble-enhanced when the speakers are installed far from the rear wall. Their sound quality is, as said, unbelievably good for the price.

LP42 with Soundcap: all the virtues of the stock LP42, brought to a higher level. The quality of the high range improves, and not by a small margin. Voices are clearer, less grainy, more natural. Strings harmonic content improves, while cymbals sound more realistic and less artificial. The 3D soundstage becomes wider and deeper, and the focus on the instruments and singers reaches a new, higher level of realism. It becomes impossible to detect you are listening to a 80€/pair loudspeaker. This is true, pure audiophile class.

LP42 with Cross Cap: the sound level of the tweeter increases, unfortunately not by a small margin. Of course, as you might expect, details become more evident, but the same happens if you add 1 or 2 dB to the treble on your preamp or amp via tone controls. The quality of the treble remains mostly unchanged (OK, it improves a little bit), and some traces of grain and glare appear here and there in the mid-high range, especially on female voices and guitars. The result is a quite fatiguing sound, almost unbearable at high listening levels. Gone is the natural lively equilibrium of the stock LP42! For sure, the LP42's didn't need such a boost in the mid and high range. The stock equilibrium is lost, but listeners with less experience (or lesser systems) might judge the sound as more detailed! This is just the effect of the boost in the highs. In my opinion, the stock LP42 is much more listenable, musical and communicative.

What this test proves: upgrading crossovers with “better” caps isn't always a win-win game. A careful choice, by several trials and errors, has to be performed before deciding which cap to use. Moreover, this test doesn't prove that the Soundcaps are better than the Cross-Caps, overall: it just proves that - with these speakers - they are a better match. The result might be different with other loudspeakers. Remember: it is always a matter of equilibrium. Perhaps the resistance of the Soundcap is very close to that of the stock cap and for this reason there's no boost in the high range. The resistance of the Cross-Cap is lower, and this adds a boost to the sound level of the tweeter, thus altering a tonal balance that already favoured the high range. With the Cross-Cap in place, the tweeter might benifit from a series resistance.

In general: be extremely careful when trying to upgrade crossover networks, especially if the speakers have an already perfect equilibrium: you might end up destroying what the designer has done when carefully matching the drivers together. Not only that, but things can get worse even on inexpensive loudspeakers (like happened with our case-study) which might sound already well balanced, by chance or by designer's skills. Incidentally, I do not know if the LP42's sound this good by chance or because someone with good ears has worked hard on their design.

Finally, do not trust crossover recappers/rebuilders. Always ask for a test before/after the mod, that can be performed on the fly, switching between the two crossovers several times before deciding what to do.