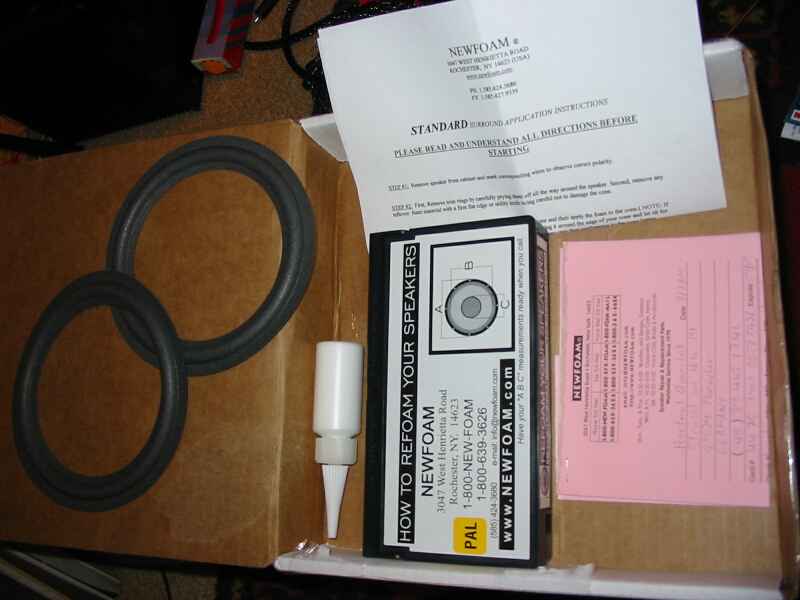 Some time ago a friend brought a pair of speakers for repair to me. They are old two way speakers from Epicure, US made. The surround of the woofers had rotten away, but my friend insisted on having them repaired, as he regarded them as sounding good enough to keep them longer. One woofer had lost its dustcap, but he gave it to me to attach it again. 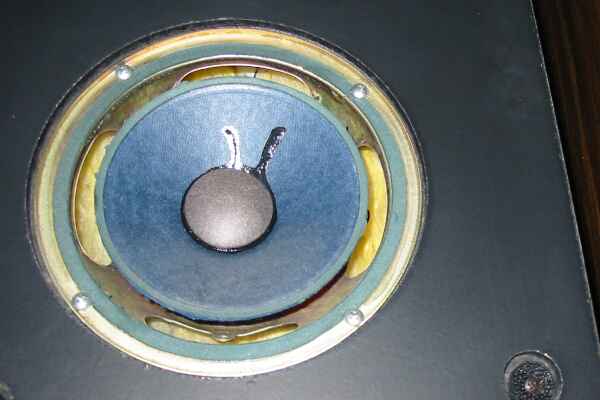 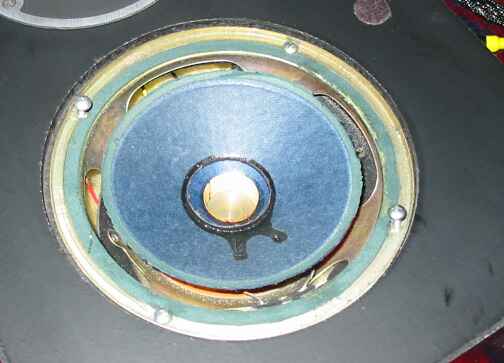 There were several options to get a new surround:

Indeed, Newfoam have a nice website, and offers surrounds in standard sizes for speakers. I sent them an email with the exact dimensions of the speaker frame and cone, and asked, which size it is in their list. They offer the kits in a light version ("Lite") and in a more comprehensive version ("Pro"). The Lite Kit contains the new surrounds, glue, instructions and a video (PAL or SECAM, both are available). The Pro Kit contains the same plus plastic shims and new dustcaps.
I then ordered a Newfoam DIY Lite Kit for 6 1/2 inch diameter speaker, because I wanted the reuse the old dustcaps. I used the online ordering method, paid with VISA card, and received the Lite Kit a week later.
The video has about 30min. lenght and shows all you have to know about speaker surround repair. Just two remarks on the video: first, the sound is bass heavy and the voice is booming, then the procedure of shortening the surround for woofers with smaller diameter is suspicious. The glue smells like wood glue, is white, and gets transparent after some hours.

First, unscrew the woofers from the cabinet, marking the color codes of the cables on the woofer frame. Then, remove all the foam rests of the old surround from the basket and also from the cone. 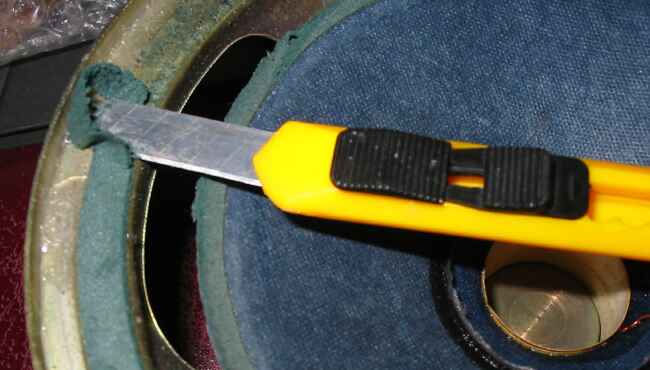 If there is no dustcap at this step of the procedure, make sure to avoid rotten surround falling into the speaker's voice coil gap. I used transparent packing tape for protecting the voice coil gap. Be sure to remove the tape shortly after, because it might get hard to remove later on. 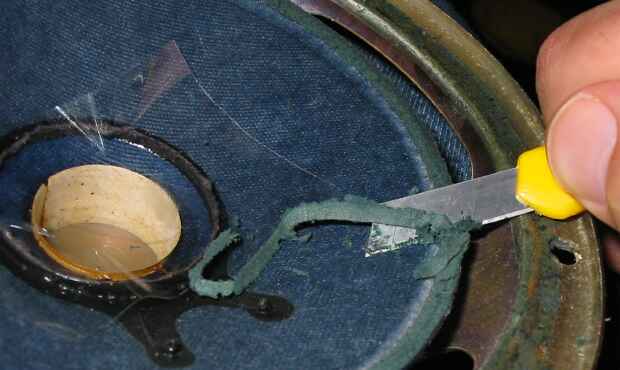 In order to do this, the old dustcaps have to be removed. 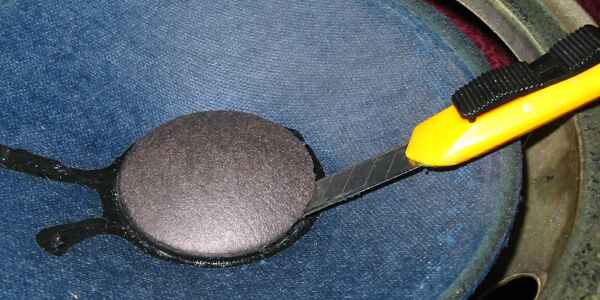 I am using paper as shims here, but plastic is much better, as it is elastic and provides a self centering function. At this point, I wished I had ordered the Pro Kit instead of the Lite Kit. 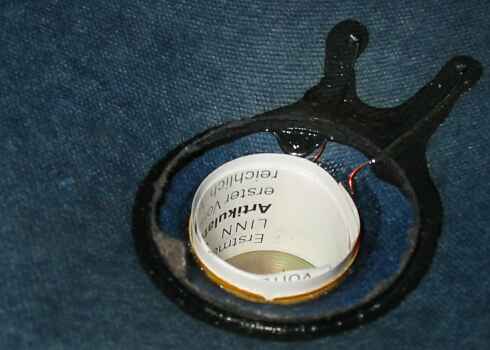 Glueing the new surround to the cone 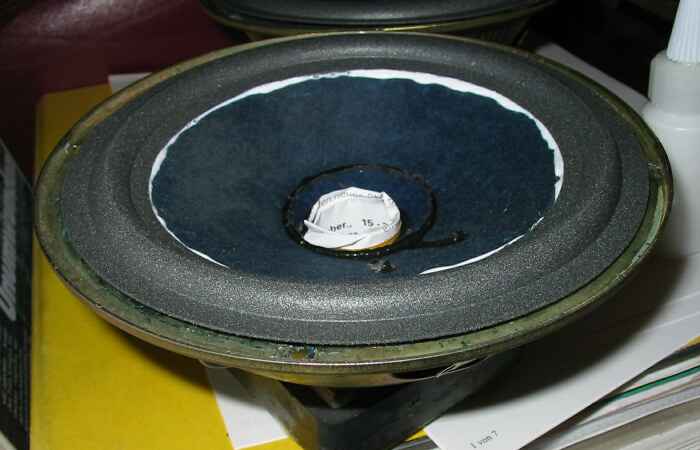 After some hours, when the glue has dried, check that the surround is well glued all over the edge.
As you note from this picture the glue has become transparent. 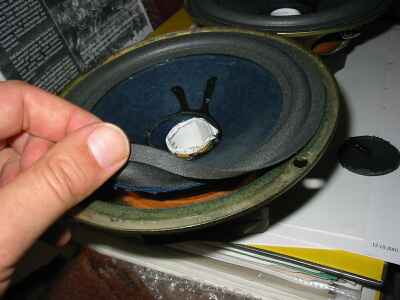 Glueing the new surround to the frame

While keeping the cone with the new surround pushed up, apply glue to the frame. As you can see on the picture, I applied plenty of glue. 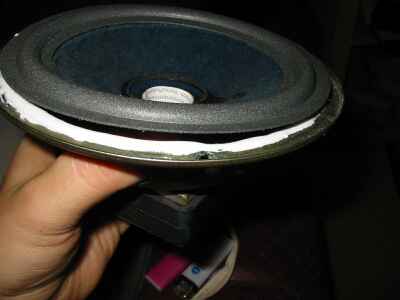 Then push the cone down, so that the surround is pressed into the glue of the frame. You can use a coffee cup or a glass, put it on the middle of the cone, and then leave it for some hours, or simply the next evening. Use your finger or the handle of a spoon to press the surround onto the frame along the edge.

Because I did order the Lite Kit, and unfortunately lost the dustcap of the second woofer, I had to made some dustcaps out of cardpaper. I used a pair of scissors the cut out circles of appropriate diameter, then sprayed them black, and then glued them onto the cone. 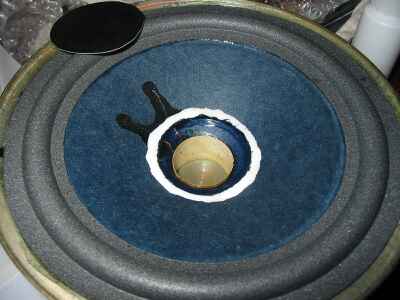 The third evening, when the glue of the dustcaps had become hard, I assembled the woofers to the cabinets again. 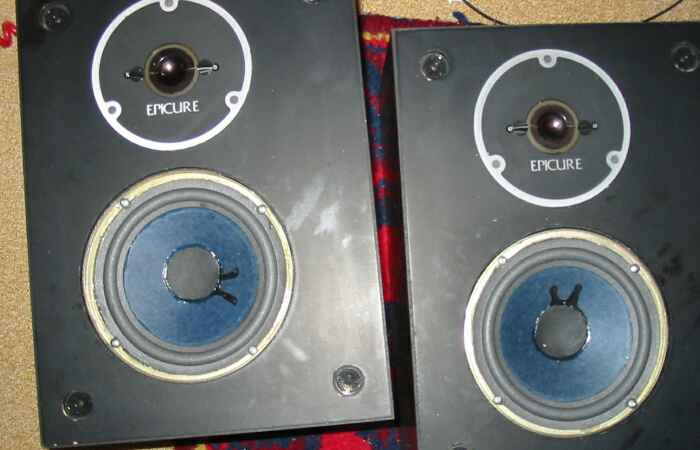 Ok, I hooked them up and listened to them. They sounded right. But as I did not know how they sounded before, I really cannot say whether they sound the same as before.

I took me three evenings, but altogether not more than 60 minutes to repair these rotten woofers. I would have saved one evening and 20 minutes, if I had ordered the Pro Kit instead of the Lite Kit. Next time, I will order the Pro Kit.
What saved a lot of time was that the kit was complete, so that I did not go the shops and buy glue or something else.