Single ended with a difference :-)

This pre-amplifier was designed last year. I was studying, as usual, the relative characters of tube and solid state, and decided for an experiment: a pre-amplifier with the purest and simplest tube-typical circuit implemented with solid state devices.

Unfortunately, there is only one solid state device which has the same polarization characteristics as tubes, and it is the jfet (junction fet). This is a very interesting device, but its usage is limited by the reduced Vds range available: it does not go over a few tens of volt.

If you think that a tube circuit normally has a Vb of few hundreds of volt, it is clear that the solid state circuit has to fight a very unfair battle. But the tests proved more satisfactory then expected, and the project finally developed into a full unit.

The overall circuit disposition is absolutely classical: an input selector is followed by the volume control and an active stage.

Why this choice in opposition to the voltage regulation at the output, like in MW Pre 01 & 02? There are several reasons.

First of all, an output impedance of a few koms, combined with interconnects and power input capacitance reduces frequency response extension. Also control on the power amp is reduced. All this produces a softer but also slower and less neat sound. I appreciated it at the time of MW Pre 01, but now I do not like it any longer. I am not sure it is simply a matter of tastes.

Last, distortion expected for the same (highish) output level (say, 6Vrms) from the low voltage jfet stage is for sure much higher than the one from a high voltage tube stage. This makes the previous consideration even more critical.

Even though the circuit disposition is classical, there are anyway several special features.

First of all, there are a set of trimmers in series to each input: this allows to set the sensistivity of each circuit, without modifying too much the overall frequency response: in fact the input impedance is limited by the 47K resistors, and the source impedence at the jfet gate is limited by the potentiometer. So the bandwidth should not change too much.

Obviously the 500K trimmers can be left apart, if you do not need them. I thought I could need them for accurate comparison of units with different output levels.

How much do they degrade the sound? I do not know, apparently really very very little. But if you feel not safe with them in the circuit, just get rid of them. You will need anyway to select the jfet for the same gain, but given the very low cost this is not an issue.

Ah, just in case you think this arrangement is not a proper one, please note that Nagra PLP has exactly the same feature...

The input selector is a high quality model from Palazzo, with gold plated contacts.

There are also other stepping attenuators on the market. I used the AURA because I had one available, but the AURA is really impressive. Unfortunately, its price is rather impressive too.

The active stage is very simple. A jfet is configured in the most classical and tubolar single ended fashion with cathode.... ooops, source automatic bias.

The unbypassed source resistor limits gain and distortion. It introduces an amount of feedback, but it is local, intrinsic feedback, and as such it does not cause any problem.

The jfet drain is connected to a bipolar transistor configured as emitter follower, in order to achieve a very low output impedence. All the voltage gain is obtained in the jfet stage: the bipolar transistor has only current gain.

The result is a very simple and unexpensive circuit with interesting characteristics. Only care, try to match the jfet gain by testing a few of them in the circuit and measuring the resulting gain. They are quite inexpensive, so you can buy as many as you want... Note anyway that the presence of the input sensitivity potentiometers allows to use also unmatched units, but there is some risk of different frequency response between the two channels.

The output is coupled to the transistor emitter through a very high quality polypropylene capacitor. I used an 8uF Auricap capacitor.

Special care for the power supply on the audio board: a further LC filter is used to filter possible noise coming in that way. The filter uses an RF choke and two paralleled capacitors, a 3300uF electrolytic (more of a reservoir than a real filter component...) and a 0.47uF paper in oil. 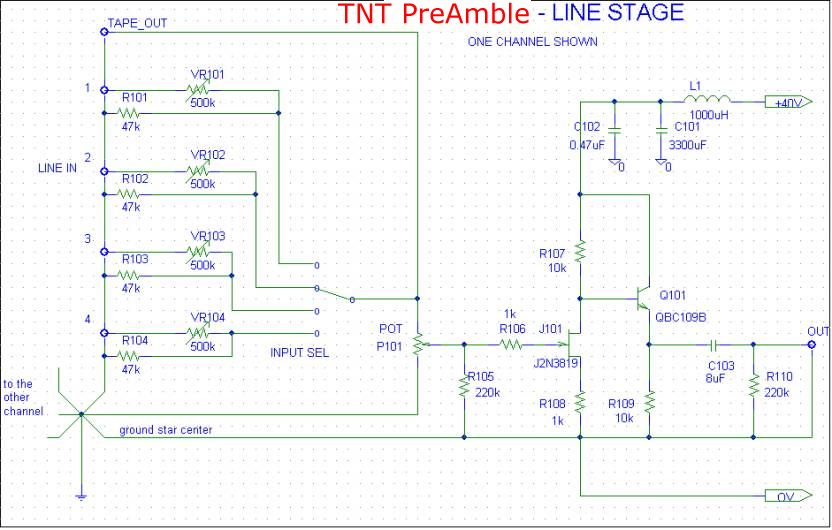 With single ended designs, the power supply circuit is almost as important as the gain stage: in this case it has been really designed with great care.

The connection to the mains is through a detachable mains cable, connected to an IEC socket on the unit back panel. The socket unit contains also the mains switch, the two fuses (one for each mains lead), a mains filter.

From this point on, the unit is completely dual mono: there are two transformers and two PSUs, one for each channel. Each power supply unit is very simple because of the fact that only one supply voltage is required, given the circuit topology, exactly as in SE tube designs.

The transformers supply 30V RMS. You can obviously use a 15+15V transformer provided you are able to correctly make a series connection of the two secondaries (which is highly expected, if you are going to address this project...). The rectifiers are ultra fast discrete diodes, type BYV27-100. This helps reducing the switching noise.

They are followed by a set of capacitors, ideally polypropylene for the lower values and electrolytic for the higher ones. These provide a first filtering of the mains frequency ripple.

Then comes a MOSFET series voltage regulator. The configuration is usual, but here the values used are rather special. The time constant of the network at the gate of the MOSFET is in fact higher than 2000sec... that is, the units takes something like 3 hours to reach 95% of the final voltage!!!

The effect is a terrible smoothing of any ripple. The power supply becomes very very silent.

There is at least one drawback: that is, the unit is best never to be switched off, but must remain on all the time. Given the reduced power consuption, it is not a problem.

By the way, the unit gets operative in a few minutes, even though it is not able to express its best performance before some time.

All the circuits are mounted on single side printed circuit boards. As usual, the copper side is used as ground plane and all the components are mounted on this side. Have a look at the assemblying instructions for more information.

The internal connections, between the boards and from these to the RCA connectors) are in rather thin, solid core, silver plated copper wire. When the connections are longer, I used isolated solid core wire from an UTP Cat.5 network wire.

If possible, even the connections between R105, R108, R109, R110 and ground should be implemented using separate leads going dorectly from the resistor to the ground star center.

Special care must be taken to minimize ground loops. With a dual mono construction this is not so easy: the configuration shown below is the one that works best according to my tests, but it depends probably on the mounting structure. 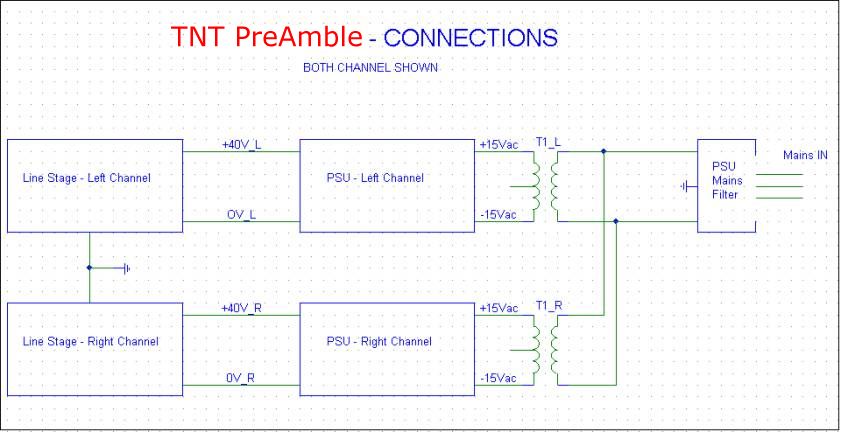 In any case the distorsion levels are not especially worrying. Have a look at the following graphs taking into account that the human ear is apparently less sensitive to distortion at high volume levels then at lower ones (the "erratic" spikes are high frequency dusturbs picked up by the measuring set-up combined with aliasing effects due to the limited sampling time of the instrument used).


Total Harmonic Distortion (on first 5 harmonics) with a 1KHz @ 2V RMS input, volume at max, the output is 6.9Vrms

Intermodulation Distortion with a 19+20KHz @ 2V RMS input, volume at max, the output is 6.9Vrms

As my habit, I am not going to review the unit at all. I do not believe the review of one's own creature can be objective at all.

On the other hand, I understand that it is important at least to give the reader an idea of the sound it produces. Please, take care to consider what follows a very biased and personal view...

What I can say is that it is extremely precise, controlled, neutral (frequency response is flat to one hertz...), but does not lack in dynamics, even though sometimes it seems so: the control is such that it does not add any more dynamics, any more boost to its input.

Its sound is very different from what is normally considered "tubey" sound, apart the fact that there is no hint of grain.

From the point of view of imaging it is very precise, in some extent, just to give you an idea, similar to the Pass Aleph P, even though probably not as pinpointing as this. The stability of the image is good. The soundstage is wide, and as deep as of the recording. Here too it tends to reproduce the recording without adding anything at all.

I just want to give you a couple of suggestions.

First, in spite of the simplicity of the design, do not make the error of underestimating the result.

Second, if you just want to test the circuit, you might set up a prototype with a series of three 9V batteries as power supply. The overall cost, excluding power supply, stepping regulator and coupling capacitors is simply ridiculous, and to test the circuit you could just temporarily use normal level ones (even though according to me it really deserves at least very good ones, if not the best on the market).

Line stage - for one channel

PSU - for one channel