This article looks at a novel way to match Sound Pressure Level (SPL) between tweeters and woofers. Resistors are used in the crossover network to lower the tweeters' SPL so that the tweeter does not sound overly loud compared to the woofer. However there is a debate as to the crossover resistors' impact on sound reproduction. Hi Fi Critic listened to eleven resistors and concluded: the differences we heard were greater than expected. They wrote that resistors: added brightness...roughness...coloration...sibilance and produced at times an uninvolving sound.

Resistors are subject to thermal agitation noise, it's the way they work. There are two components to resistor noise: 1/f noise, so called as it mainly affects frequencies below 100Hz and so should not be a factor for tweeters. And the flat Johnson-Nyquist noise which dominates at mid to high frequencies and this noise will impact on tweeter performance. Vishay state that resistor: performance at high frequency is dependent on the case size, trim method, part value and termination style. Whatever the resistors' architecture and build it will have a thermal noise component. Some resistors might have less noise some more but they all impart a noise to the sound reproduced.

What finished a crossover resistor, for me, was listening to James Dillon's Sgothan for solo flute. With a resistor fitted the flute just did not sound like a flute but more like someone blowing into a random pipe and the variations in the playing were not reproduced well. It was not a nice sound. Instruments generally sounded thinner in the lower treble and sharper with a resistor in place. and violins were presented as if with a sheen. High frequency grating broke through, notably, with upper frequency flute, small pipes, violins and vocals.

Resistors add noise that will impact on detail, are musicically damaging and add colouration. Buying a more detailed tweeter to compensate for the loss of detail from adding resistor noise is an option. Swapping the resistor for a better one may also be an option. An alternative solution is not to use a resistor at all to match SPL.

Zu speakers in their Essence model avoid using a resistor by pushing up the first order crossover point to a high frequency (12kHz). A capacitor in series will lower tweeter SPL albeit at a frequency dependent rate. An alternative no resistor solution is to physically manipulate the drives to match SPL, that is to use air or distance to lower SPL. If the tweeter has a greater SPL than the woofer then placing more air in front of the tweeter compared to the woofer will lower the tweeter's SPL for the listener. In practice this means placing the tweeter further away from the listening position than the woofer. By moving the tweeter you can increase or decrease tweeter sound to a preferred level. 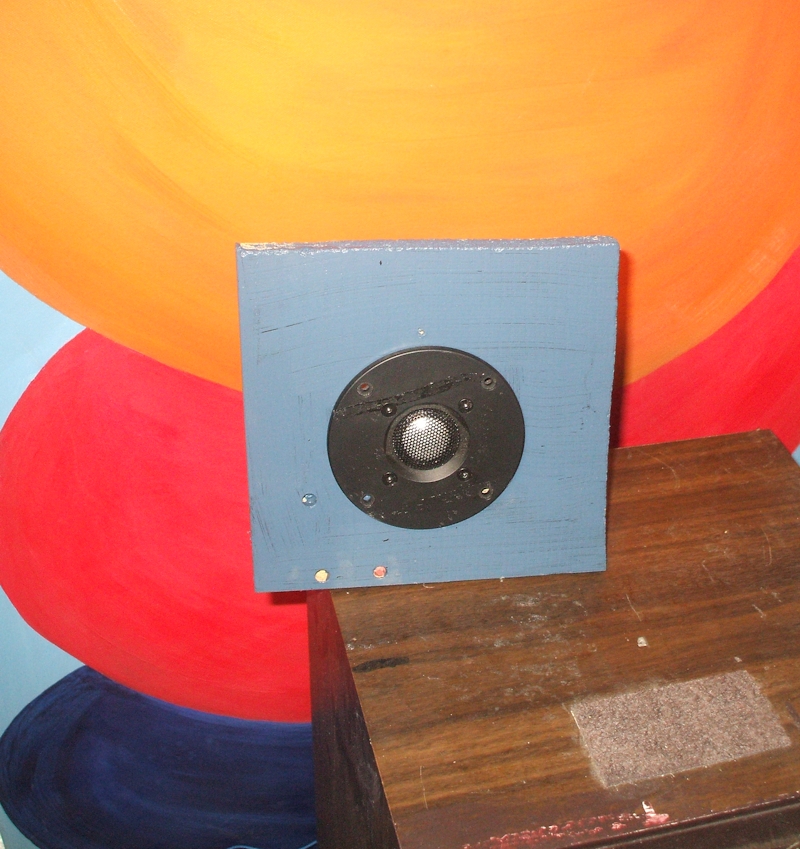 I have two drivers, a tweeter (Peerless DA25BG08-06) measuring about 94dB SPL and a woofer coming in at a lower 88dB SPl. In this case I did not fit a resistor to lower the tweeter SPL but instead positioned the tweeter further away from the listening position than the woofer. Initially I positioned the tweeter at the speakers' back corner nearest the listening position. Why that corner? To minimise the crossing of sound waves emanating from the tweeter across those from the woofer (comb effect). I also slightly toed in the tweeters but not the woofers and placed sound deadening material to the hard surface of the woofer tops. If the tweeter comes across as too soft, at this back corner position, move it forward along the speaker cabinet edge, a little at a time, until you're happy with the output and the sound.

From listening, with the tweeter in its new position and with no crossover resistor, there was much less treble hardness, loudness and colouration. I was expecting a more forthright treble sound but this was not the case. Poul Ruders Pestilence Songs is full of upper frequency soprano that is difficult for tweeters to reproduce without also sounding hard, coloured and sometimes a bit painful. Using air to match the tweeter SPL to the woofer, the sound of this CD was neither grating, distorted or hard and the piece was easy to listen to, it was detailed and played well. It did not sound this good with a resistor fitted in the crossover.

There will be a phase effect. Two drivers on a single baffle will not be acoustically aligned as the dome tweeters acoustic center will be forward compared to the woofers and so they will be out of phase. Many manufacturers have moved towards acoustically drive alignment by installing the tweeterin the throat of the woofer and see also Theil. Moving the tweeter back away from the baffle will improve phase and acoustical alignment. Alignment may also be affected by the crossover, speaker box and impedance. Moving the tweeter along a horizontal plane of the woofer box top until a suitable vertical linear phase response is obtained between the drives will give a time and phase alignment. Time differences between drivers will come across in the sound as transient degradation and/or a dominant frequency either brightness or a bassy sound. Both SPL matching and phase can be achieved by maneuvering the tweeter. Move the tweeter horizontally along the woofer box edge closest to the listening position until you are happy with the SPL matching and at the same time listen for time and phase coherence and again make tweeter position changes until you are satisfied with the sound.

It is less neat having the tweeter in its own movable housing on top of the woofer box. But if you're dissatisfied with the high frequency sound of your system maybe what you need to do is to dump the resistor in the crossover rather than dump the tweeter. If you build your own speakers and are comfortable changing crossover components then removing the resistor will be a relatively easy thing to do. If you don't have experience in changing and building crossovers then this procedure carries a warning. Crossover resistors have a detrimental sound signature. As the Hi Fi Critic article noted, resistors can add brightness, colouration and siblence. Maybe some of the upper frequency tweeter fatigue and grating is due to the resistor, that was true for me. Then dumping the crossover resistor could be a solution. You can do this by moving the tweeters' first order crossover point to a higher frequency, this won't work well with sharper filters, or by physically positioning the tweeter so that it is further away from the listening position compared to the woofer.