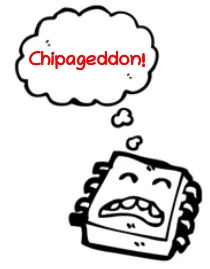 The current chip shortage (sometimes referred as Chipageddon) that's hurting almost any company on Earth, from auto firms to computer and phones manuafacturers, is going to hurt the audio market as well.

Those of you with grey hair - or no hair at all - might still remember the 1973 oil crisis caused by the members of the Organization of Arab Petroleum Exporting Countries proclaiming an oil embargo. The embargo was meant to harm nations perceived as supporting Israel during the Yom Kippur War. Initially Canada, Japan, the Netherlands, the UK and the USA were affected by the embargo but soon this extended also to Portugal, Rhodesia and South Africa. And finally Europe as a whole. As a result, many nations experienced gas shortage. Almost 50 years later we're facing a similar problem, but it is not oil that's causing headaches.

The increased demand in electronics - mainly personal computers, webcams, tablets and smartphones - during the Covid-19 pandemic, is going to affect many other market areas, as car production, audio gear and almost everything else made on Earth, since it is hard to find a device which doesn't rely on a microchip nowadays.

Recently, GM said that it would extend car production cuts in the U.S., Canada, and Mexico. AMD and Qualcomm, which sell chips to most of the top electronics firms, are suffering from the chips shortage as well. Last December, the Semiconductor Industry Association said that global chip sales would grow 8.4% in 2021 from 2020's total of $433 billion. PC sales were up 4.8% in 2020, and this is the highest annual growth in the PC market since 2010.

What about audio and HiFi? Smart working has increased the demand for headphones and desktop speakers, as well. Do headphones use microchips nowadays? Of course they do! For example, all the noise cancelling circuits rely on microchip power. Active smart speakers, as well, use microchips, because they are mainly Class D powered and have Bluetooth/WiFi connectivity. Not only, but since people are forced to stay at home, the demand for good audio gear (new purchases or upgrades) has increased as well. Each and any HiFi component uses microchips, so the audio industry is going to be hugely affected by the chip shortage.

For how long will it last? Well, that's hard to predict. Those in the know believe it will go on until the end of the year. Cisco chief Chuck Robbins told the BBC: ”We think we've got another six months to get through the short term. The providers are building out more capacity. And that'll get better and better over the next 12 to 18 months”.

Hence, if you have to wait for that new DAC or amplifier you were dreaming of, don't blame the HiFi companies, perhaps they are struggling to get the chips they need. In the meanwhile, stick with vinyl and tubes ;-)