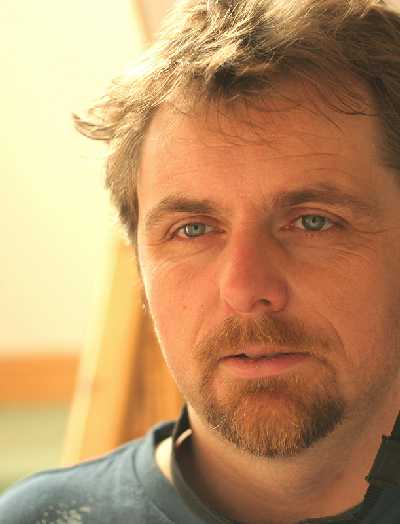 I'm 41 years old and hail from the (usually) sunny Isle of Wight. I live with my partner Kerry and her 2 boys Robin & Luke, aged 11 & 17. I work as a test technician for a local electronics company called Pascall Electronics, but I also supplement my income by being a wedding and landscape photographer (see www.alistersphotography.co.uk).

We live in a country location with fields out the back and at the bottom of our garden is a substantial log cabin, the main room of which is 14 feet by 10. This is where my severe case of "audiophilia" finds its outlet! The acoustics are actually really good and it can be turned up to good volumes without disturbing people. It's a nice haven after a long day at work.

My first memories of music and the equipment to reproduce it are listening to Tchaikovsky's "Swan Lake" on my grandparents' big old wooden radiogram, aged four. I can still vividly remember the thrill of the discovery that wielding the volume control could heighten the drama of the orchestral climaxes and the fascination of watching the tone-arm put itself automatically on to the record and take itself off again at the end  it was like magic! From then on I was hooked.

The tendency to be fussy about sound quality came later  around the late teenage years - & I spent most of my young adulthood as a frustrated audiophile  with plenty of desire, but without the means to buy decent stuff. I have more money now, which helps  but the real catalyst to achieving a high-end system that really satisfies me is of course EBay. That has transformed what can be achieved without having a stratospheric budget. Most of my system is second-hand and has cost maybe 30% of what it would have cost new.

I tend to like a sparkling unfettered (not harsh) treble and therefore have a taste for ribbon tweeters and electrostatics. I usually dislike horns (with the exceptions so far of Zingali & Acapella Violons). I'm a fan of valve amps  I do love a good powerful push-pull amp - but have also enjoyed various transistor designs (such as my current Red Rose amp, the early sweet little Arcam Alphas, Pass Labs X-350 & Halcro DM58s). I regularly go up the London Heathrow show, so I get to hear plenty of this stuff.

I enjoy both analogue and digital sources  and particularly enjoy finding ways to extract high-quality audio from PCs  but I'm a strictly 2 channel guy.
I'm just not into multi-channel - our TV is amplified by a very modest (but very good) 1970s Pioneer receiver & 1990s Mission bookshelf speakers - total cost second-hand £35!

I have say that when I listen to the large vivid 3D sound-field that my main stereo audio system creates, I just can't see the point of multi-channel. Why would you want sounds behind you when you're watching a movie where all the action is in front of you? If the screen is really good, the visuals appear to extend backwards in 3D from the plane of the screen - just like well set-up stereo speakers in fact! So it seems to me that the ideal movie viewing system would have stereo speakers either side of the screen...

I would say that I lean towards a bit of lushness & sparkle. I like systems that flatter the music so that you can use them as a tool to enjoy what you're hearing - which seems to me what a hi-fi system should be about.

Upgrading plans for the future: I would like to get a PS Audio Power Plant Premier  to sort out my currently too variable mains-quality. The CD player, turntable, the tuner and the PC with USB DAC all sound great and I feel no urge to upgrade them at the moment.
I'd like upgrade the amplification to an all-valve set-up  probably something second-hand from Conrad Johnson  certainly the speakers deserve this.
The speakers are wonderful & I imagine I'll keep them for life  they're clearly good enough to take stratospheric quality sources & amplification, so plenty of scope to gradually upgrade the rest of the system...