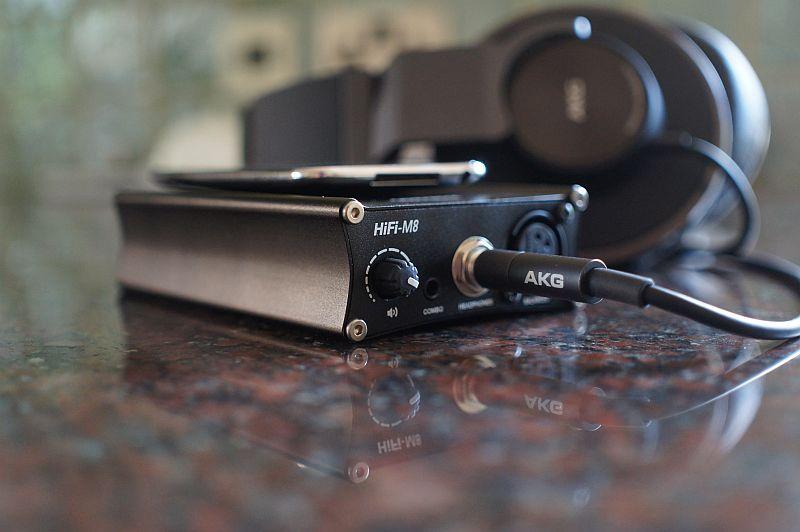 One advantage of reviewing hi-fi is that occasionally one gets to listen to things that are a bit off the wall, or, at least a bit different. The Centrance HiFi-M8 (just M8 from here on) is just such an item. It's a battery powered combined DAC and headphone amplifier aimed at giving the audiophile a high end sound from his or her mobile devices. Whilst there are plenty of low end solid state DAC/headphone amps, there are relatively few that make the quality claims that Centrance do for the M8. I was offered the chance to try it out just as I was due to go on holiday, so it seemed a perfect opportunity.

The M8 is a robust metal box offering 24-bit/192kHz digital conversion and a high powered Class A headphone amplifier. It is available in a total of eight options, being combinations of two input options and four output ones. Both input options offer asynchronous USB to 192kHz with a choice between an input for Apple “i” devices (at up to 48kHz) or one for SPDIF optical. I'll talk about iPods in this review but iPads are served in the same way. The headphone outputs can be regular jacks or a range of XLRs offering balanced outputs for appropriately equipped headphones.

The M8 is powered by a rechargeable battery charged via a special cable which is about the size of a heavy duty laptop cable. The cable can be left connected for desktop use. The battery delivers plenty of output power and isolates the unit from the vagaries of mains power.

Three switches on one end offer different levels each of output power, treble and bass. The output impedance is also switchable to accommodate different headphone types.

In summary, this is one highly versatile and customisable device.

The review unit offered USB inputs, type A for iPod/Pad connection and type B for computer. In common with all other 192kHz capable devices, a dedicated software driver is needed to communicate with the PC. The software was downloaded from the Centrance web site and installed without any issues. This is not always the case with software drivers – so well done Centrance! It's then just a case, at least on Windows machines, of selecting the Centrance as an audio device. This version of the Hi-Fi-M8 works natively with Apple "i" devices so it's simple to connect, not needing the iPod or iPad to communicate via a "camera adapter", which is the case for some other DACs that advertise "i" compatibility.

Outputs on this example were regular and mini jack outputs along with a single balanced stereo output for compatible headphones. Unfortunately, I had only regular connections available so I can't comment on the benefits of being balanced in this context. Although the amplifier is Class A the battery ran for several hours and the unit never got warm to the touch.

The unit comes with wide elastic bands that can be used physically to strap an iPod to it. Although not unheard of from other manufacturers, this struck me as a slightly awkward arrangement and I'm not sure I'd trust my iPod to it except under the gentlest circumstances. A switch on the rear turns the M8on and selects between iPod or computer connection. Hooking it up is easy. Whack a USB cable into one end, headphones into the other and away you go. 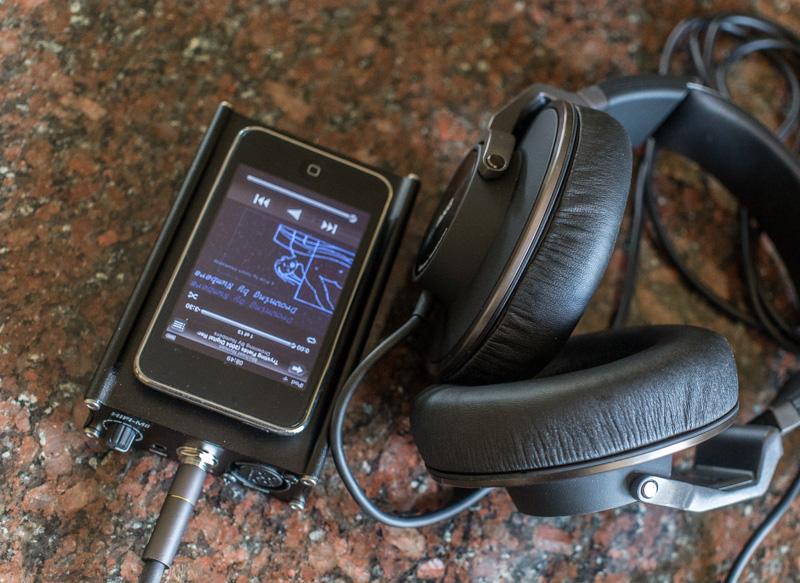 I used the unit mostly with my old Sony MDR CD1700 headphones which are very clear and open with decent bass extension. I also checked my impressions with AKG K550's which are one of the better value mid-priced headphones around now. The sound was consistent between the two pairs of cans. It's difficult to describe sound in isolation so I like to make comparisons where I can. In this case I didn't have any directly comparable devices, so compared the sound to the Acoustic Fun PDM10s, a good but significantly cheaper USB powered DAC/headphone amplifier and, separately, to my regular headphone set up: the DAC of the Marantz SA-KI Lite through a Musical Fidelity X-Cans Mk 2 Class A valve powered headphone amp.

There was no comparison between the Centrance and the PDM10s – the Centrance just blew it away in all departments. The stereo image was very detailed without sounding exaggeratedly finely drawn. It offered an unusual degree of solidity to the instruments that was realistic and that I found totally engaging. This was especially striking listening to high resolution material designed for headphone listening such as the extravagantly named “Dr. Chesky's Sensational, Fantastic, and Simply Amazing Binaural Sound Show”. I was particularly struck by the beauty of the simple guitar and vocal presentation on the opener “Storms are on the Ocean”. The impression of quality continued as I put the unit through my normal range of listening – from Miles Davis to Joe Satriani. It didn't seem to favour any particular style and the solidity of the image never tipped over into hardness. There was less of a clear distinction when comparing the unit to my regular headphone set up but it was still evident that the DAC was resolving a greater level of detail and that the image in the headphones was very slightly more tangible and realistic than with the Marantz/MF combination. Knowing that a key selling point is the ability of the Centrance to drive more challenging headphones I tried it with my travelling headphones – a pair of Sennheiser PX250's. These have a higher impedance than most of my other cans and tend to sound somewhat weak when driven from a normal iPod output. I often find I need to use a separate amplifier just to get a decent volume level, let alone a full sound. Well, the M8 transformed them. The sound filled out and became much more listenable. Just before the review period ended I bought a pair of Sennheiser HD650's. I'd been hankering after a pair of these for years but had never done enough headphone listening to feel I needed to change from my Sony's. But as those are now starting to show their age, and I found a good deal online for the HD650s, I took the plunge. The HD650s are higher impedance headphones that are said to benefit from a separate amplifier as well as being very resolving, so this gave me a chance to test my impressions of the M8. Again it came out very well. The combination of the HD650 and M8, even fed by (uncompressed files) from an iPod gave, for want of a better expression, a high end sound. Clear, stable image, an uncoloured midrange, deep bass and open treble. Altogether it was the type of sound I can listen to for hours. I don't want to give the impression that the sound was perfect. There are DACs that give more accurate representation of instrumental timbres and amplifiers that may present this with more refinement. But, for the price and the convenience of the package, this is very good indeed.

For a portable device this has a great sound and it's very good by any standards. If I was travelling a lot and wanted something to turn my laptop into a high quality stereo to use with headphones in hotel rooms I'd certainly consider it. It would also be good with an iPod on long train journeys although the subtlety it is capable of might be wasted in noisier environments. Having said that, in days when every ounce counts against a luggage allowance, and the M8 is not really a practical proposition if one is out walking then, despite its flexibility, its size and weight may condemn it to remaining a niche product.

On the other hand, its weight is a consequence of a very solid build quality - it genuinely feels bullet proof - so there are compensating factors. If you're in the market for such a device it is also worth looking at the ifi nano iDSD, similarly a battery powered portable DAC/headphone amp and which has the benefit of being smaller, much cheaper and having DSD capability. I understand that an updated and smaller version of the Centrance DAC has recently been launched and this will compete more effectively. This original however does set a high sonic standard and is unique in the range of versions available to suit some more esoteric requirements such as headphones requiring a balanced input.