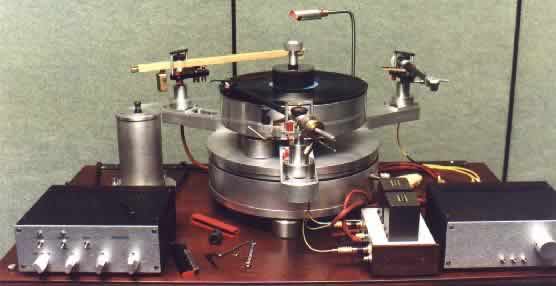 TNT-Audio >
Could You explain to our readers when and how You started your interest about hi-fi and turntables building?

CM >
I started my interest in the sixties end, when in Italy the only review with a section dedicated to hi-fi was "Discoteca hi-fi".
In 1971 I visited the first italian hi-fi show, the "SIM" in Milan. I dedicated myself to live tape recordings for many years, because I was more satisfied listening my tapes than LP. I was one of the first CD player buyers, but six years later I discontinued it forever, because I was not satisfied.
Going back to vinyl, I was not fully sastisfied by the aivable equipments, so I tryed to build a tonearm. In this way I realized that the vinyl was better than I expected.

TNT-Audio >
To many people may seem out of time the proposal of hi-end LP replay eqipment. But we trust that many enthusiasts, maybe old practioners, keep up the analogue together with new followers, despite the new digital tecnologies incoming.
For example the thousands Protractor gauges, free distributed in Italy in these years, testify this. From your point of view, how do you see the present analogue market?

CM >
In the latest years the audiophiles are becoming more involved in vinyl and the related replay equipment, despite the prophecies wanting the vinyl extingushed 10 years after the CD income. Now 16 years are gone by, and we find that vinyl discs, previously released at 33 rpm only, now are aivable at 45 rpm.
In every review I read, in every web site I visit, I find new turntables builders. This is surprising from a thing that should be extincted.

TNT-Audio >
Let's go a little bit deeper into your technology, could you resume the main features?

CM >
About the tonearm since the beginning I experienced that the unipivot bearing is better than cardanic bearings. I know audiophiles disappointed by the more difficult adjustment, They are right to be disappointed, but they do not undestand that the perfect adjustment is not difficult, but it is impossible in current antiskating devices.
My tonearm resolves this problem. I did not invented the unipivot, neither the magnetic antiskating. The only example of this combination, previously appeared before my arm, is the "Decca international arm", which was my inspiration.
All other magnetic antiskating were in cardanic arms. The true unipivot bearing(only one needle) has lower friction than ball races and "dual pivot", (this is a cardanic bearing, and it sounds like cardanic, nothing to do about true unipivot).
I discovered that the skate force is not constant, but it decreases from the disc outer side to the inner side. This is not noticeable in cardanic bearings, and this demonstrates their bigger friction than true unipivot (only when without any mechanical braking).
The ideal antiskating should be adjustable to decrease its force toward the disc center. The "wire and counterweight" antiskating can not adjusted in this way, and the Decca magnets can not.
In my arm this is possible by means of 4 alnico magnets placed in the space in the only way to have the correct adjustment range, this arrangement was showed in the n.18 of the italian review "Costruire hi-fi" (pritend January 1996).
I am owner of this copyright, DIY can built it for their own use, but my magnet arrangement is forbidden to other manufacturers. They can build arms featuring unipivot and magnetic antiskating, but the magnets can not be placed like in my original arm.
Be aware that only my original arm can be adjusted annordingly to my method. Some audiophiles tell that the sound is better without antiskating.
Knowing how current antiskating are rough, they are right: the sound is more dynamic without, but the distortion is about 10%.
After 100 hours the cantilever is out of center, the stylus weared and the vinyl grooves are badly cutted . By means of my antiskating the stylus has a balanced pressure on both groove walls from the beginning to the end of the disc.
In the listening the image is focused and stable, at the disc end there is not distortion increase. About my turntable the most important feature is the flutter reduction, the gum belts are too elastic, the mylar tape is better, as widely the Germans do. The motor is D. C. powered type, because the "cogging" is less than in the A. C. motors, and D. C. motor is powered by battery.
If someone tells that there is not difference between mains and batteries, he may be right. I installed other arms in my turntable, but only my arm allows to hear the difference: switching out the battery and mains in the musicians seem become tired, as much the rythm is weaker.
This happens because the traking accuracy of my arm give back the full energy of the note attack, so it is possible to hear the difference in the turntables otherwise not noticeable.

TNT-Audio >
Many turntables enthusiasts ask to us about modifications to upgrade their analogue machines.
We purposed about everything: oversized external power supplies (DIY or not), rewiring, mats, damping treatments and so on. Accordingly to your experience, what DIY enthusiast can do to upgrade their machines?

CM >
I suggest accessories easy to remove, because not reversible modifications reduce the resale value. I started modyfing, but then wanting modify everyting, I realized that it was time to build completely new devices.
The arm rewiring is a common pratice, in turntables it is advisable to try various accessories to find the most suitable, there are too much differencies between various turntable models, so I can not suggest common rules.

TNT-Audio >
About turntable building, we are asked by many audiophiles wanting to build by themselves their machine. There are interesting kits supplied by "Origin Live"and other manufacturers, but really many want to build everything from zero. Excluding the obvious and costly shaft-bearings, could you suggest some ideas to these "crazy" DIYers?

CM >
They should be crazy wanting to build a perfect machine at the first attempt. I employed 7 years to discard wrong ideas modyfing, demolishing and rebuilding prototypes to have a competing machine.
DIY enthusiast shad from me not only an idea, but the well tested project of my arm, pritend on the Italian review "Costruire hi-fi". Many italian DIY built it, someone installed it in his Thorens, someone in his Rega, all they told me that my arm was better than any other modification prevously tried.

TNT-Audio >
Let's talk about the market. Your turntables capture the attention of many audiophiles, but it seems to me that the analogue is a niche inside a market area, which is just a niche.
Can you tell, from your point of view, what is today the market of hi-fi and analogue in Italy, and what prospects you have about foreign markets?

CM >
In Italy the analogue market is less than in Germany, Japan, UK and USA. It is enough to see how much new hi-end turntables appeared in Las Vegas and Frankfurt hi-fi shows. Thanks to TNT-Audio, I have some foreign enquiries.
For sure internet will have a main role in my future activity, so I am upgrading my web site, there will be english option to make known my products in foreign countries.

TNT-Audio >
Will you offer an entry-level turntable for budget-conscious customers?Do you have some ideas about new projects, do you can tell something about them in advance?

CM >
I built two budget prototypes, but the interest was zero. In the pre-owned advertisings there is an over offer, so the new products in budget area are disfavoured. Instead there are far less hi-end turntables, so it is possible to sell something new items.
Now my arm and my turntable are satisfactorily developed, so I can dedicate more time to solid state electronics powered by battery, seen the turntable experience.
To know more, visit my web site.