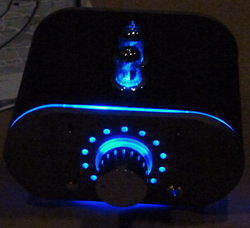 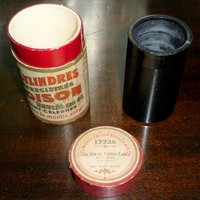 In which a habitual listener to these...


...finds himself in the land of these

In mid-July, I got wind that the Capital Audiofest show would be taking place at the end of the month about a 20-minute drive from my home in the Washington, DC suburb of Silver Spring, Maryland. Naturally, I wrote Lucio at once asking if he'd like me to cover it for TNT-Audio. Just as naturally, he said “yes” and even sent me a nice “We Support Real Stereo” TNT badge so I could proudly show my affiliation. Pretty courageous of him, I'd say: now he has no plausible deniability that TNT is affiliated with me! Understand, although I've attended antique phono shows in the past, this was my first venture into a high-end show, and it's my first attempt to write up impressions. I hope you'll bear with the neophyte!

So it was that on July 27, with my wife's forbearance to give me the afternoon off and with my trusty point-and-shoot digital camera in hand, I found myself at the event registration desk in the Silver Spring Sheraton Hotel. Organizer Gary Gill very kindly got me my media credentials; he's standing in this photo, and seated are his able assistants (L to R) Paul, Mike, and John. My hat is off to all for running a well-organized, entertaining event with more than 40 rooms of vendors and manufacturers. I should note that Gary arranged for presentations by three interesting guest speakers: Alan Silverman, Mark Waldrep, and Tom Perazella. Unfortunately, my time constraints dictated that if I had attended their talks, I would not have been able to visit many of the displays.

I didn't know what to expect going in, but as it proved I was in for a few surprises. One was that if turntables didn't rule, they certainly were in the ascendant. Moreover, many of the rooms sourcing from digital were feeding from computers via outboard DACs; fairly few were playing physical CDs, and in those cases the players were hardly on prominently display. That probably shouldn't have been a surprise, to be honest, but it brought home something I already knew, namely that the CD format is not in good health. On the other hand, I would have scoffed if anyone had told me in advance that open reel tape decks would be on display. I have a couple of these magnificent beasts myself, a Pioneer RT-909 consumer deck (currently out of service, needing new belts) and an Ampex AG-440 pro deck, and my efforts at care and feeding of them had led me to conclude that open reel tape is made largely of unobtainium and that the format is deader than the proverbial doornail. Apparently not so! I don't know whether its current incarnation has much in the way of “legs,” but certainly open reel decks were much in evidence, sometimes as primary signal sources.

I was also surprised to see the extent to which vacuum tubes are now very much the rule rather than the exception. I wasn't keeping track, but I have the impression that next to none of the displays was purely solid state. Tubes weren't limited to power amps, either; they also were showing up in DACs and headphone amps and phono preamps. On the other hand, I didn't notice much in the way of Class D or Class-T amplification happening, or, at least, if it was nobody was playing it up as a selling point.

Finally, I'll confess disappointment at the nearly total lack of classical music in the demonstrations. I heard lots of jazz, blues, and rock, but classical was so much absent that when I heard a recording of baroque music for trumpet and organ coming from room 704 (Soundfield Audio, Audience, Kevin Kemp Audio) as I walked past, I departed my planned sequence of visits and rushed in just to enjoy it. The demonstration followed on with the familiar Vivaldi concerto for two trumpets and orchestra before shifting back into the same sort of jazzy/bluesy stuff so much in evidence elsewhere. Time was, back in my ill-spent youth, that classical music was the default choice for demonstrating equipment; the gear's performance in rendering and differentiating the sounds of purely acoustic instruments, both solo and in ensemble, was a benchmark of quality. That obviously is no longer the case.

OK, enough authorial musings; on to the reason everyone is here: the equipment. I'm going to proceed in a different way from the usual “walk you through the show a room at a time” approach and present what I saw by classes. I hope that what's lost in “you are there” sense will be offset by a better flavor of the range of gear on display.

As noted above, turntables were in evidence or serving as the music source in a large percentage of the rooms, even those not devoted to turntable vendors. They ranged from rebuilt vintage models right up to the latest of today. In fact, what jumped out at me at the very first display I encountered upon entering the show, set up by speaker and electronics concern Legacy Audio, was a VPI Traveler turntable demonstrating a cable-suspended turntable shelf system. I was told that the cables were not just random steel or nylon but were chosen after extensive research and experimentation to find something more acoustically neutral; the “winner” actually came out of the world of sailboating and appeared to be some sort of braided synthetic rope. Moving deeper into the display, a more substantial table was serving as signal source. 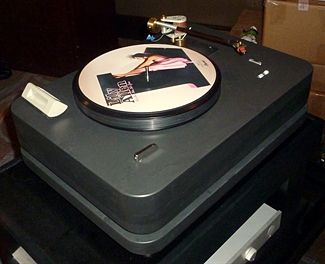 The VPI table in Legacy's shelf display was in good company at the show; VPI models were the most popular choice among modern designs, appearing in displays including, naturally, VPI/Joseph Audio but also LKV Research, DC Audio DIY, and Gas Audio/Luminous Audio 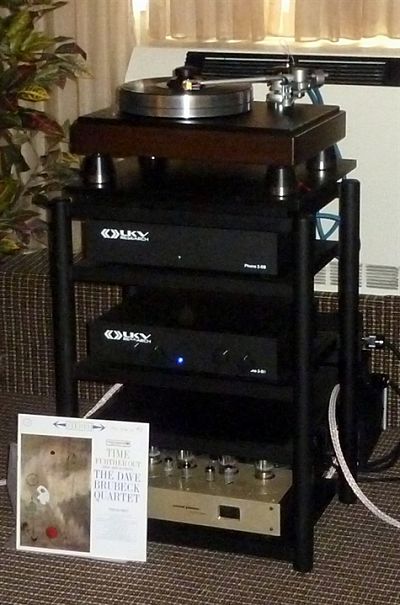 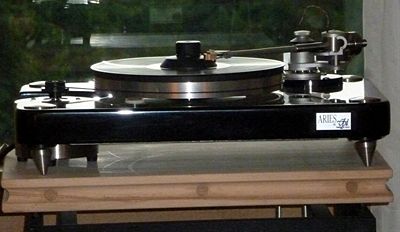 StereoDesk/Audio Prana was exhibiting a modified vintage Garrard 301 in plinth milled from a single block of brass and fitted with an Analog Instruments Limited Apparition 12 Tone Arm.

Of tables dating back to the classic years in whole or part, however, the most popular were Thorens, appearing in three displays: Robert Lighton Audio, fitted with an arm by roommate Audio Note UK; the Deja Vu Audio vintage room; and Synthesis Audio/Proac, which also had a more current offering on tap. 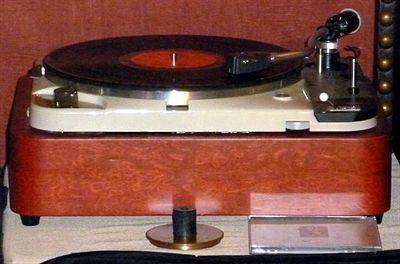 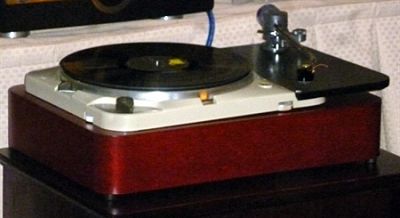 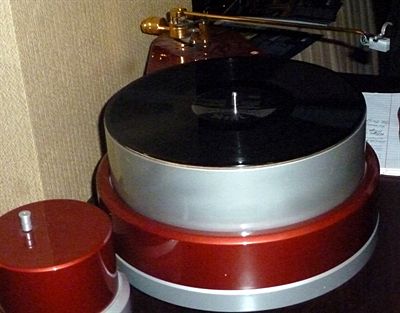 As you'd expect, many current production tables put in a single appearance here or there. This AMG Viella turntable was set up in the Merill Audio/Sanders Sound Systems/Channel D room as part of the demonstration display for Channel D, producer of audio software that generated a striking screen display and seemed to offer very promising noise control. Notwithstanding the AMG's inclusion of a 78 speed, when I asked whether the software had been tested with 78s I was informed that it had not. It is available only for Apple, meaning Windows users like the present author must buy extra hardware to run it. I was told that “many” buy a $600 Macintosh to do the job; I'm afraid I won't be joining them any time soon.

In its solo room, Audio Note UK naturally showcased its own, rather more classically styled product.

...while Miracle Audio preferred moodier lighting and more of a thowback to the '80s...

...and Triode Wire Labs/Swap Meet Audio/GT Audio Works/Kanso Audio Furniture opted for no plinth at all for their KuzmaStobi S with Stogi 12” VTA arm and Goldenote Boboli MK II cartridge. These kind folks definitely earned a call out for hospitality when they offered this by-now-parched reporter a soda, complete with Triode Wire can caddy, when he entered their room.

Of course, playing records on a turntable without first cleaning them is a big no-no, and the show featured more than one record cleaning machine for those wanting to automate that task. VPI had the 16.5 machine on display in yet another room with moody lighting.

The most enthusiastic promoter of his wares, however, was Dave Ratcliff with the Ultrasonic V-8 cleaner, which is capable of cleaning up to eight records at a time. They are dipped in a bath of water with a little PhotoFlo passing through a micron-level filter and air dried after cleaning; no brushes or other physical scrubbers ever touch them. The machine has not been tested with 78s; I don't know how brittle shellac would take to ultrasonic excitement.

There's more to say, of course, but I'll save that for a second article, coming soon to a TNT-Audio Web site near you. Don't touch that dial—it'll mess up your tracking force adjustment! Go to Part II now!