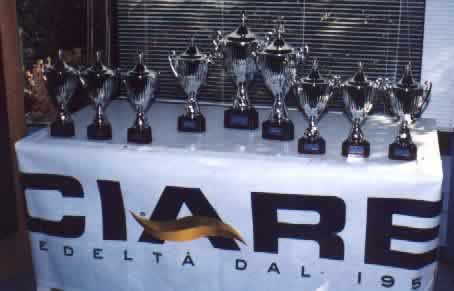 For the few audiophiles still ignoring it, the Ciare Trophy is a biennal tournament for amateur loudspeaker DIYers, organized by Ciare, one of the major Italian driver firms. The Trophy's purpose is to keep interest alive toward DIY loudspeakers for simple fans like us.
So, they admit to the Trophy all (non-professional) fans who want their "acoustic creature" to undergo trial by a Jury of experts.

Ciare first acts as a "filter," eliminating projects that are judged less interesting or original - then the company nominates a commission (the Jury) in order to critique a limited number of projects (nine this year).
What's the prize? All the participants receive a paper attesting to their participation and a cup. First place wins a 1-weekend trip to a European capital of his choice. The second and third places must be satisfied with buy bonuses for Ciare gear.

I was telling you about the Jury. Usually its members are chosen by Ciare among specialized press reviewers. This year their invitation was extended to the "electronic press," meaning TNT-Audio. I want to personally thank Lino Esposto, Ciare tech manager and the Trophy's deus-ex-machina, for having invited us to take part in this interesting "audiophile" event.

With me, your humble TNT-Audio representative, were reknowned names -from left to right:

Assisting everybody's work was the tireless Lino Esposto, who also provided measurements for the presented projects - measurements were taken with first rate gear and Clio board.

The "match" developed in two stages - the first dedicated to the traditional measurements (room response, impedance modulus, and phase), the second dedicated only to the listening tests. Actually, after my request, we also had a brief, preliminary listening test for every loudspeaker before performing the measurements. The same track was played on all of the speakers ("Sad Old Red" by Simply Red, from their "Picture Book" CD).

This preliminary listening test allowed a first scale of the values to be judged. The listening session, in a big and rather reverberant room, was possible thanks to a high level system sporting a Wadia transport and DAC, Conrad Johnson Premier Ten preamplifier, a pair of Classè Audio DR3 VHC power amplifiers, "normal" Ciare-marked cabling, and Snell floorstanding loudspeakers.

The listening tests took place as follows: every judge played one track (his choice) for every loudspeaker. This gave a total number of six tracks that were heard (although some digressions actually took place), then multiplied by nine. Considering the room's tropical heat and the very short time between each listening session, we are not talking about an easy task:-)

Every judge had to express his votes by filling out a form provided by Ciare. The relevant votes can be grouped into three sections - the measurements part (measurement-based judgments), the listening part (listening judgment, based on several parameters, such as dynamics, voicing, etc.), and finally the realization part (original design, veneer, materials, domestic impact ...).

Every speaker could receive a score from 1 to 10, all the scores had to be summed, thus forming the final grading by every single judge. The single, final gradings were joined together to arrive at the final, definitive grading, that for the sake of brevity, is as follows:

Some judges gave more importance to project originality than to the sound itself. Consequently, the winner (and the last in the grading) didn't necessarily have the best (or worst) sounding speakers. Each graded position is given by a large number of parameters, of which sound quality was 57% of the total - too little, for me.
To clarify, with this judgment system it may happen that the best sounding loudpeaker does not win because its design is not original, or it is modestly finished, or features only "normal" measurments.
But, mutatis mutandis, it can happen that a mediocre-sounding loudspeaker can get a highest score, thanks to its aesthetics or to its particularly original configuration, or to its high quality veneer.
I don't completely agree with this philosophy, because in my opinion, the winning loudspeaker should be the best sounding of all, even if it's made from a paper cube. Yet, the Trophy's rules are clear and inarguable.

Anyway, I want to express some comments about the presented projects. First, it's clear that a big room is a rather large handicap for presenting very small loudspeakers. Not only "budget" things - I mean very cheap - are competing, they are at the same level with elaborate and important 5-ways, tri-amplified, and etc., floorstanding loudspeakers. It is difficult, very difficult, to correctly evaluate lots of projects that are so different from one another in price, dimensions, realization difficulty and materials used. For sure, it's easier to build a good-sounding loudspeaker with high end drivers, than a cheap project sporting "basic" stuff.

It must be said that we saw a bit of everything - compact bookshelves, big and little floorstanding towers, dipoles, several satellite + subwoofer combos, every type of loading, even horn drivers. It's like a technological "summary" of what the market today offers to the DIYer. I want to praise all the designers for the evident passion shown in their work, a sign that gives good hope to this sector of ours, one that always seems a bit short of breath.

There were a lot of young people and an atmosphere of absolute friendship and cooperation, that helped to almost make stress disappear for the one-day marathon to which everyone, participants, organizers, public, and judges, had to participate. I particularly recall one participant's wife who remained in the room without moving for the entire, very long listening session - a truly praisworthy conjugal dedication!

At the end, exhausted by the great heat, we participated in the Trophy Ceremony with a bit of sadness for the lowest graded (yet, always first over the excluded ones!!!) who really dedicated a lot of work to his project. I saw also some disappointed faces, including some judges' and mine, who would have preferred another winner ... but clearly we couldn't have unanimity!!!!

I was glad to see the listening evaluations were rather uniform among the judges, althogh we all came from very different "musical" and "audiophile" affiliations. This is good, bearing in mind the conditions under which the tests were conducted. In particular, it means that it's true that there isn't a single way to aproach HiFi - but it's also true that everyone of us has in mind an ideal of sound perfection (given by Music and instruments) that we inevitably utilize to compare and to judge loudspeaker-reproduced sound.

My personal award goes to the "2-way sealed box floorstanding with Morel and Audax drivers" design, because in my (and not only mine) opinion it was absolutely the best sounding of all. Unfortunately, it was penalized by its scarce originality and by the fact that it used drivers from which it is relatively easy to extract good sound.

Praise also goes to Filippo Punzo (here is his web site Audiofanatic), active member of our mailing list, for his loudspeaker, undoubtly the most unusual of the trophy - a subwoofer + satellites combo (nothing strange, yet) where the satellite was a ceramic halved cone (split along its height) with unprecedented artistic decoration :-) (see the picture below for details)

Praise and a sincere thank-you goes to the whole Ciare staff, particularly to Lino Esposto, for having organized an event that's unique in Itay, very useful to keep DIY alive and stimulating. Not many youngsters can afford the expense of high quality loudspeakers, and the possibility of making one themselves allows many to approach the HiFi world with a lot of satisfaction and little cost.

On the other hand, some designs, as good as they were, left something to be desired when it came to sound quality (I am talking about the lowest graded ones), so it's better not to live with illusions. To design a good sounding loudspeaker is not the easiest thing in the world, and in this case it's better to save energy and look to the traditional market, with its wealth of merchandise for all needs.

Below are some pictures of the participants and their projects. To the first two of them goes my personal prize, the one for the most original design for Filippo Punzo (fifth, on the left) and the one for the absolute best sound for Giulio Santi (third, on the right).

Above, some interesting designs, for one reason or another. Following the order: Gabriele Pontarolo, Riccardo Filograsso, Nicola Piacente, Paolo Saronni. I apologize for the absence of pictures of Fulvio Marcolin and Giuseppe Parlante due to misdevelopment of the film. Should the participants have a personal web site, they can contact me, so that I can place the link to it on this page.