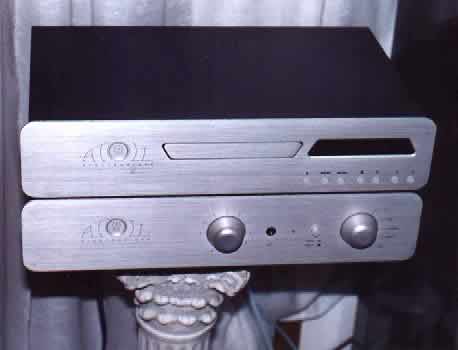 You may have read the reviews of the integrated amps IN 50 and IN 80 by Atoll, here on TNT-Audio. This French Company has now a complete line of CD players: CD 50, CD 80 and the top of the line CD 100 (here under test). These, as the amps, are available in "silver" finish which includes the use of better components inside. 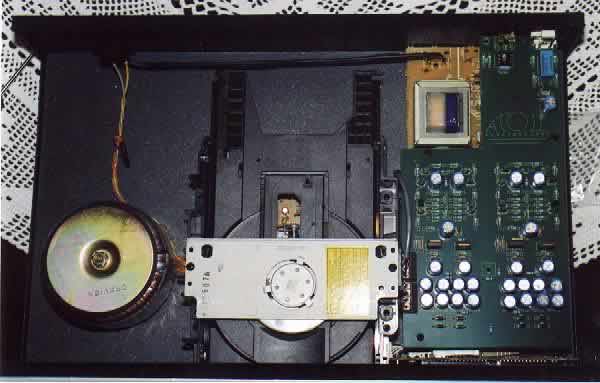 Inside view: output stage (on the right), toroidal transformer (on the left)

Tecnically speaking, the CD 100 is a traditional single-bit Japanese CD player with a new output analogue stage and a toroidal transformer that feeds it. A closer look at the inside of the CD 100 unveils its inner secrets.
The CD transport is a Philips VAM 1201/03 unit, used in many budget Japanese players while the digital circuits and audio boards (including the diminutive power supply transformer) are those of the Technics SL-PG 490/590, the entry-level players from the Japanese Company (priced around 150 $). It's no mystery, the boards still show the SP-PG 490/590 labels on them.
Then you have what the French engineers have done: added a new board which hosts a dual-mono symmetrical low impedance (750 Ohm) discrete analogue output stage fed by a massive 165 VA toroid and a bunch of small caps (10,000 uF total). That's it.
In Italy we'd call this operation Tweaking d'autore, that is to say, a tweaking session perfomed by a HiFi Company instead of some crazy audiophile.
Then you have the cabinet, exactly the same grossly finished and pretty resonant one used for any other Atoll HiFi component, be it an integrated amp, a preamp or a CD player.
Finally, the remote control: a Technics remote with an Atoll plaque on it :-)
The whole package hits the scales at 7 kgs (that's 14 lbs, more or less) while the size is the usual Atoll one: 44 x 27 x 9 cm.
The Atoll CD 100 makes use of medium-quality gold-plated RCA's, 2 for the analogue output and 1 for the coaxial digital output, while the detachable power cord is again of the Technics kind, that is, the classic, diminutive, ultra-low quality figure-8 plug (no cool IEC receptacles here, sorry).
The output level is easily adjustable from remote, cool if you're a lazy lad, not exactly a must if you're a die-hard audiophile. I, for one, prefer fixed outputs.

The cabinet, the output stage and the toroid make the price of the CD 100 grow from 150 $ (the price of the Technics units) till 1,250 $. Too much for a tweaking and a new cabinet? Maybe. I'll let you decide. I'm mainly interested in the sound of this unit. I've tested it into various systems, including one based on the Atoll IN 50 integrated amp.

Once the secret has been unveiled I phoned a friend of mine, unhappy owner of a tweaked Technics SL-PG 490 palyer. We opened the two players and compared them side by side. No doubt, the two players were stunningly close.
And now let's them play some Music.
The listening tests confirmed one of my credo's: the most important part into a digital player is....its analogue output stage (and its power supply). Yes, transport and DAC can still make a big difference but if you don't have a good output stage you're going nowhere.
Sonically, the Atoll CD 100 has NOTHING to share with the its poor Japanese little brother. Not only, the sound of the French player is very, very close to that of the integrated amps IN 50 and IN 80: dynamic, with plenty of punch and quite detailed.
Not exactly harmonically rich, the CD 100 prefers to give you the "big picture" of the musical event, instead of wasting time trying to paint any recessed detail. For example, take cymbals and horns: these instruments are harmonically very rich but the Atoll reproduces them a bit "mono-tonal" (the "one-key attitude" as I call it), without the usual "sparking" effect one may expect.
In the mid range this player is quite sweet and lush and adds a touch of velvet to voices and choirs. These are always pretty powerful and solid, just sometimes harsh during the most intricate vocal patterns.
So, what's left? The bass range!!! Yes, this is the portion of the audio spectrum where the Atoll CD 100 does its best. Powerful, extended and dynamic till its deepest end, the bass is sooo groovy and intriguing. It lacks some extra articulation, for example during some killer bass pattern such as in "Mezzanine" by Massive Attack (first track, a killer one for ANY mid-priced CD player) or in the "finale" of the Symphony with pipe organ by C. Saint Saens, if you're a "classically-minded" audiophile.

Basically, the Atoll CD 100 isn't a champion in the definition department but it still plays good tunes, it can rock and give your Music a lively kick.

A standing ovation for the punch is needed, here. The bass energy is simply outstanding, a must for rock and pop Music rich in dynamic content. You can't ask for miracles, though, and when a 30 Hz pipe organ note is played while the large orchestra is exploding in a fortissimo...well, the Atoll start to compress the sound and grasps for breath.
The same happens even with the most energy demanding and dynamically challenging trip-hop tracks, such as the well known "Howling" by Morcheeba (from "Who can you trust") or some of the most insidious patterns on Prodigy's "The fat of the Land". These are, of course, border-line situations, where only far more expensive CD players or transport + DAC combos can survive without compressions.
This means the Atoll CD 100 will be able to shake your underwear with the 90% of "normal" Music.
It is not as outstanding in the microdynamics department, though, but that's not its Mission.

Not the Atoll CD 100 forte. The 3D image isn't large, the contours aren't sharp and, during strong dynamic passages, that small bit of depth completely disappears.
When playing small jazz or camera ensembles, the French player succeeds creating a decent image though the height is still not sufficient, in my opinion, especially considering the price tag.
In my experience, poor imaging ability is normally due to cheap CD transports. The VAM 1201/03 isn't exactly the cream of the crop of digital transports and this can be an explaination, but certainly there's more. Perhaps the not so good harmonic richness in the high range has something to do with the content of ambience informations. Most of the infos on the "soundstage" are hidden in the high range.

The Atoll CD 100 likes spikes! Indeed, soft shoes can make it sound way too sweet and soft. Anyway, it's up to you to choose. Try by yourself and decide, I'd prefer spikes (or, better, Superspikes).
Apply the same criteria when choosing interconnects: open, detailed and with a good bass range.
As already remarked, the mains cable of this player is detachable but you will experience some trouble searching for "figure-8" non-IEC terminated special power cords. The Company Cablerie d'Eupen makes a good AC cord with this terrific plug...but it is the one and only I've ever seen.
Let me state this clear: I understand the original player had such a diminutive, poor quality mains connection BUT!!!! for 1,250 $ I would have strongly welcomed a decent 1 $ IEC socket, better if equipped with a sort of Shaffner mains filter.
Also, let me remind you that special power cords are beneficial especially with CD players because of the EMI/RFI garbage they absorb AND transmit.
The French player showed some sensitivity to the way the wall plug was inserted into the wall socket (AC phase, that is). Even the owner's manual alerts the customers on the correct connection to the mains. Of course, you mileage may vary depending on the AC you have at home.

Manufacturing and finish. I don't want to be tedious, so let me avoid to whine again about the poor quality of the finish and of the cabinet of the Atoll components (oops, Britney, I did it again! :-)). While almost forgivable when dealing with the budget integrated amps, I can't tolerate this on a 1,250 $ CD player.
Other complaints: the sad mains cable and the stock feet, nothing else than the same used under the amps.
Sound. Reading my would like list I've found: better harmonic richness and instrospection ability. Better articulation of the deepest bass notes.

In case you weren't aware of what happens in the audiophile market, let me state clear that MANY so-called "audiophile-oriented" CD players are nothing else than cheap, mass-marketed Japanese players with a sturdier cabinet and some cheap tweak here and there. Few brands design their players from scratch.
The Atoll CD 100 does something more, where it counts most: a new analogue stage and a good, massive power supply section. The effect on the sound is very interesting, not so is the retail price, a bit high, in my opinion, considering the content.
Anyway, if it is "sound" what you're all about, then listen to the Atoll CD 100 and forget the rest. If you're searching for a lively and punchy performer, go out and listen to the CD 100.