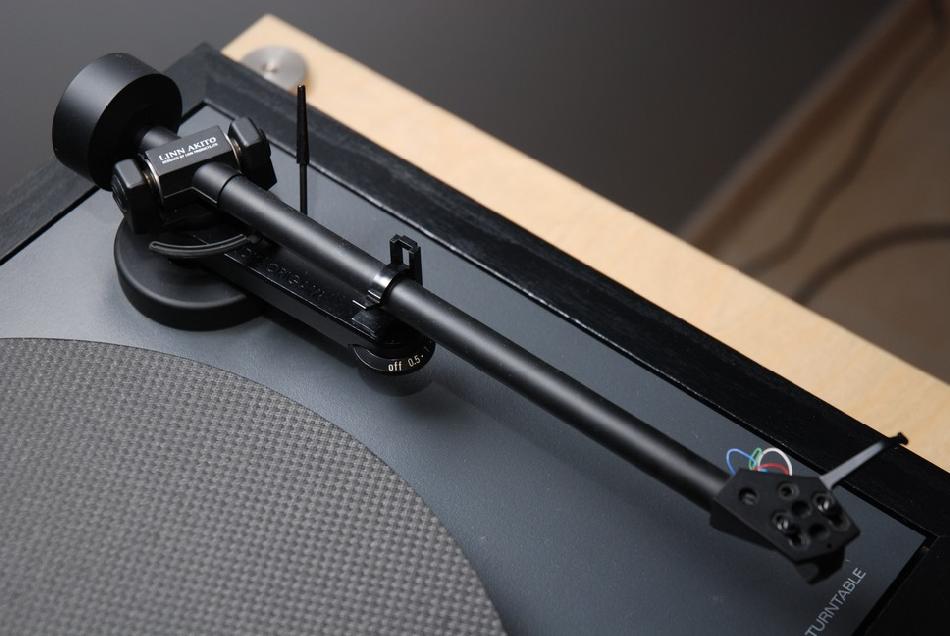 For my eighteenth birthday I was fortunate enough to receive a Linn Axis/Akito/K9 combination which (apart from the cartridge which has been changed quite a bit) has run pretty faultlessly for the last 24 years. I still use it today with a few extras to up the performance and some decidedly better cartridges.

Arm wise it's always been stock as the upgrade path isn't as easy as it could be if I had another deck. The Linn geometry is not the most widely used on the market and it's always been considered taboo amongst Linn owners to put an Ittok arm on an Axis as the money would be better spent towards a Sondek onto which the Akito could be mounted. There is of course a huge variety of Rega arms and turboed variants thereof which sound tempting until you realise the surgery involved in fitting one to an Axis which doesn't have a replaceable arm board. Then there are of course other solutions to this (none of which are cheap!) including Kuzma, Jelco, Pro-Ject or even a newer Linn Akito at the bargain(cough and splutter!) price of £1500..
Or, and here's where this review comes in, you can get your basic Akito and get it modified to get the most possible out of Linn's 1992 baby arm.

I'd been thinking about this for a while but it was the arrival of the Ortofon 2M Black that I reviewed earlier this year that got the ball rolling as it won't fit Linn arms due to their headshell pins.
Now quite why Linn thought having to use separate headshell leads on their base model arm was a good idea is totally beyond me. I understand that for their top spec carts with flying leads this is logical but as no one schooled in the cult of Linn would ever consider putting the top spec Linn MC on an Akito it all seems a bit pointless and requires excessive faffing.

So I phoned Audio Origami and spoke to John Nilsen (also known as Johnnie, Johnnie 7 or J7 for reasons known only to him - actually he'll tell you if you ask but it all adds to the mystery) the Scottish Sorcerer (if you can have a Welsh Wizard I'm sure you can have a Scottish Sorcerer) of all things analogue to see what could be done. For those that have never heard of Audio Origami a brief introduction is due. Audio Origami is based in Glasgow, Scotland and specialises in the manufacture, modification and repair of tonearms.

AO currently makes 3 arms (PU7, UniArm and RB7 - see website for details) and can modify or repair pretty much anything else from the simple and well known to the obscure and complicated. So if you have somehing where the manufacturer has long since given up and no spare parts are available (this is the case with quite a few 80's arms) you might just be in luck as Johnnie has access to some serious machining equipment along with the patience and passion to get your kit back up and running and probably sounding better than when it left the factory all those years ago.

During our conversation Johnnie suggested he internally rewire the arm (I chose the Cardas option with new vdH tags although Kondo and Ikeda silver wire is available), fit new bearings where required (clean and flush those that don't need changing), and add his Super OFC with modified phono plugs arm cable. He also has a machined aluminium horizontal bearing and antiskate mechanism housing for the Akito which ups the performance even more as well as looking rather nice. The horizontal bearings are apparently a weak point in original Akitos as they're prone to crud getting into them (they don't have dust shields) and then sticking. This makes the cartridge's job harder due to lateral resistance from the arm. If your getting the bearings done the aluminium housing/bearing combo comes in cheaper than buying them separately so unless your really skint get them both done at the same time. You know it makes sense and it's definitely a Stealth mod that your accountant won't notice... 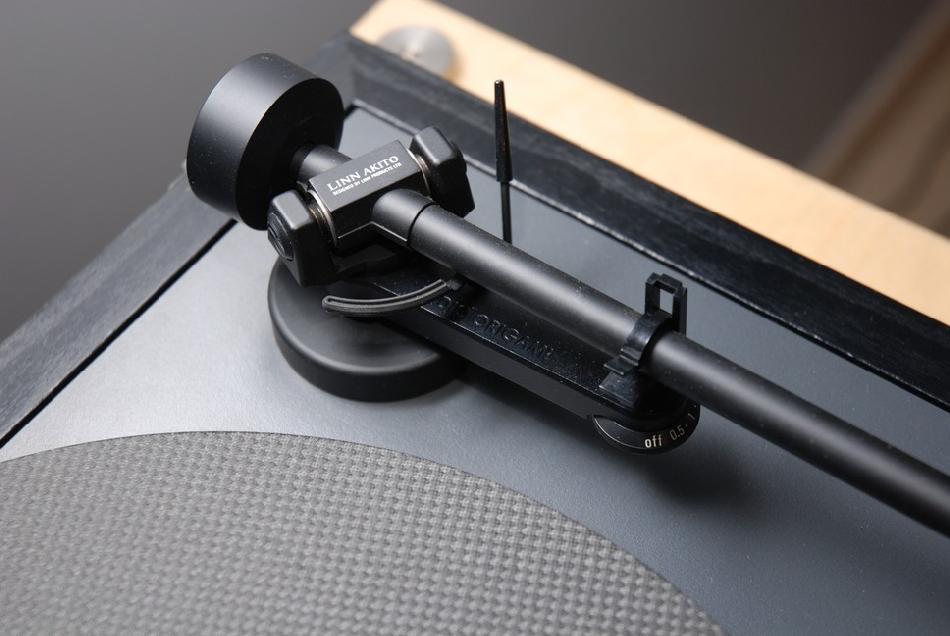 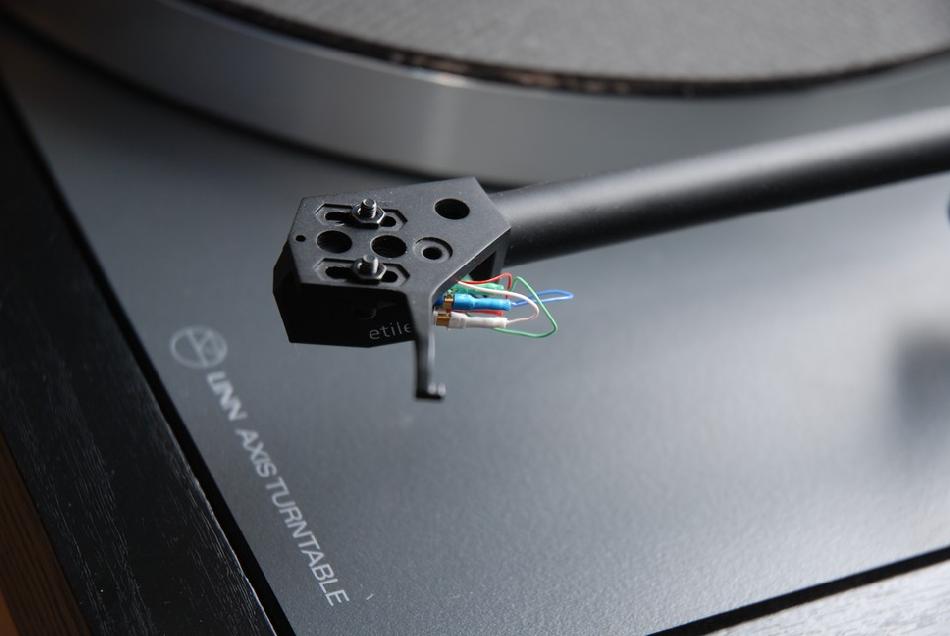 The Super OFC arm cable is an in house special made by Johnnie and you cannot get it anywhere else. It can be specified phono - phono (shown below) or phono-DIN. I have both versions to enable me to run coherent cabling between turntable and step up transformer and then from step up transformer to phono stage when required. In the case of a Rega rewire it can be hard wired to the arm.

The right angle DIN plug for Linn arms and others with a detachable arm cable is from SME and Johnnie considers it the best around. The phono plugs are modified but what exactly is modded is a closely guarded secret. The cable is amply flexible so as to not upset LP12 suspension for those who are mounting their Akito on one but you may need to do a tiny bit of setup work as the arm is heavier with the aluminium cue plate than with the original assembly. Don't just plonk the Akito back onto your LP12 and hope for perfection. 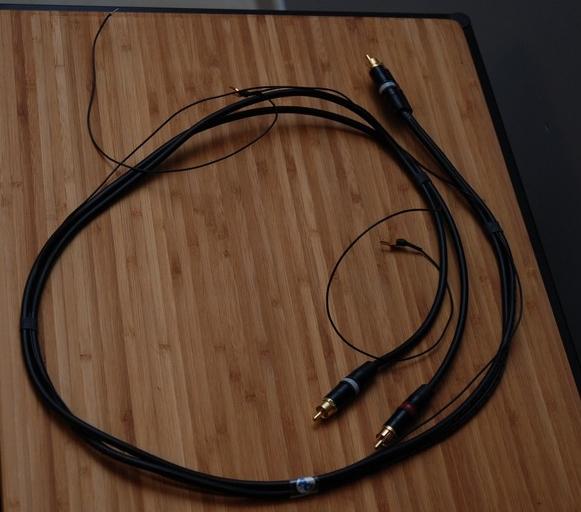 I packed up the arm and sent ot off to Glasgow. It was back within a week and onto the deck it went equipped with my Reson Etile MC.

Now I'm going to disappoint a few of you here because I'm not going to do back to back comparisons with the new and old arm leads. Firstly at TNT we don't do cable reviews any more and secondly I'm treating this like a whole arm rather than swapable components. I will say the cable is well made and easy to install and comes complete with all the necesssary grounding leads so hum should not be an issue (and wasn't).

So what is it like? Visually and tangibly the new aluminium base takes the quality level up substantially - the arm looks like it means business although to the untrained eye at a range of a metre or so it still just looks like a black tonearm so as I said above if you're trying to get an upgrade in under the radar this one scores highly.

Sound wise it's just better all round. everything is clearer, bass is more extended, deeper and tuneful , treble isn't harsh even at side ends. The most impressive thing though is the insight it gives into music. Suddenly you understand better the way something is being sung or played.
For example the first record I played once I'd set the arm up was The Cardigan's "Gran Turismo". Track 2 Erase/Rewind is my favourite and the AO Akito made Nina Persson's vocal more expressive and more of a performance rather than just someone who's singing what's on the lyric sheet.
Add to that improved projection of the acoustic guitar and drums along with a distinct improvement in the "wobblieness" of the synth bass line and it's clear the changes are entirely positive.

After the upgrade I can guarantee a few "I didn't notice that was sung in that way" moments. You'll notice I didn't write "I'd never heard that before" as we're getting into a level of subtlety that goes beyond the now it's there now it isn't. Yes the modified arm will more clearly show up stuff that the standard arm glosses over and will better highlight instrumental character and tone but for me the bonus is that it gets not only the information but the nature of the information and puts it in the right place spatially at the right time. The result is just more music than the standard version.

So should the Akito owners among you take the plunge and have the work done? Well lets look at some numbers first. At the time of purchase (1992) an Akito was around 130GBP. Current Akito retail is 1500GBP(!) and yes, before I receive a barrage of hate mail from current Akito owners, the current Akito is different in several areas to the old one (but not majorly so in my honest opinion but as we know in hifi the devil is in the details although I would still question whether the new Akito is a 1500GBP arm).

If you have an existing untouched Akito Mk1 or early Mk2 it's probably well due a bearing service by now as I'm not sure even Linn intended them to last so long. With an AO service/upgrade you can have the have the wiring and cue plate done at the same time, boost its performance, and you'll get another 20 years out of it which is probably more than twice that than Linn ever intended.

I would be willing to bet  - and this is I admit speculation as defined by the concept of betting as I don't have a current Akito in house to run the two back to back - that a Mk1 or early Mk2 Akito with the AO upgrades would compete more than favourably with the current spec model. The total RRP of the combination I have here (including original purchase) is sub 600GBP. It will fit directly to Linn decks with no surgery, improve the sound substantially and allow you to fit any cartridge that is within the specified tracking range and compliance values.  J7's work and his customer service (I paid for the work in case you're wondering) get a big thumbs up from me. Highly recommended.