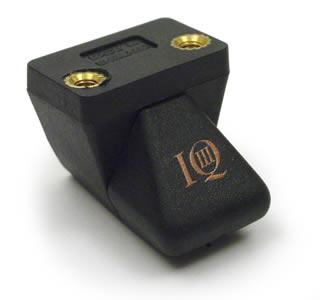 Here we go with another challenger to the considered Holy Grail for vinyl replay that is the ubiquitous Moving Coil Cartridge and all the potential palaver that the owning of one entails. The regular readers amoung you will have noticed I started on this subject earlier this year with the Ortofon 2M Black and I admit to being a long time Reson Reca user. This time it's Audio Note and it's IQ3 model that's challenging for the ultimate MM crown.

The Audio Note IQ range consists of 3 models - and these are simply named 1,2 and 3. They are from the outside based on the Goldring 1000 series and as such have the same shaped Pocan (PBT resin) bodies as the 1000 series, threaded inserts for easy mounting (hooray!) and easily changeable styli but once you look a little closer the differences between the IQ series and their parent cartridge line become more obvious and it's these that make the IQ seires a bit special. 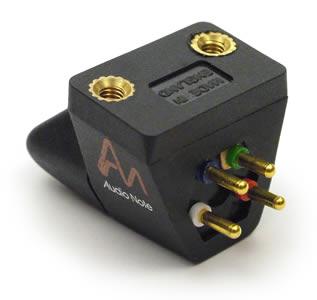 The IQ3 is the top of the line MM model in the Audio Note range. It's interesting to note that Audio Note also make a line of MC cartridges including a field coil powered model. These are up in the high end pricing spectrum of things - I can only interpret this as Audio Note believe that it's not worth going to an MC cartridge until you're ready to spend over 1000GBP. 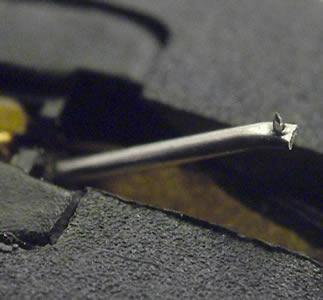 The 3 models share a common base with ultra fine copper coil windings (the wire is too thin to be made of silver). This is an interesting choice as other manufacturers often advocate the use of silver wire and Auidio Note has prefered lightness over electrical properties. The differences between the models in the range occur in the diamond type and cantilever material. You can of course start with an IQ1 and upgrade by simple change of stylus to an IQ2 or IQ3 - no rebuilds are necessary. The base model uses an aluminium cantilever with an FG type 1 diamond. Go up to the IQ2 and you get an FG type 2 diamond but keep the aluminium cantilever. Spend some more money for the IQ3 and you get an AN type 2 diamond as used in the AN Io 1 cartridge and a Titanium cantilever. Ah yes the T word loved by engineers and cyclists everywhere. As I'm both of these I was really looking forward to this test. The IQ3 promises performance never before achieved with an MM cartridge so let's see if it delivers.

I ran the IQ3 at it's recommended 1.75g tracking force in my Audio Origami modded Linn Akito Mk1 on my usual Linn Axis with a Living Voice Mystic Mat. Phono stages were either the usual CEC PH53 or the new Graham Slee Accession connected to a Canary Audio CA 608LV integrated and Pure Audio Project Trio 15TB (or Voxativ) Neo Speakers.

Straight away from the moment the stylus hits the vinyl it's obvious that the cartridge is a very different animal to the Ortofon 2M Black that preceded it. The IQ3 brings a lot more high frequency information and life to the party. It's not that the Ortofon is dull but to my ears it's probably the epitome of cool neutrality or at least what most people would regard as neutrality. The IQ3 is most definitely a cartridge that challenged my perceptions of neutrality and how we describe it. When someone, be they hifi dealer or best mate, tells you something is neutral you don't expect fireworks in the top end or slow muddy bass when you listen to it. You probably expect a product that has a sameness whatever you throw at it. If that sameness happens to coincide with your listening tastes the you may think you have found the Holy Grail. But have you?

The IQ3 is more about bringing what is on the record to your system be it good or bad and showing the differences between recordings and how the music that's on them is played. This is a very obvious echo of the Audio Note "Comparison by Contrast" theory. There's an interesting article on this on their website (called "Are you on the road to audio hell") so I would recommend reading this to get the full theory but in essence the audio system should not impart its character on the music bringing a sameness or a certain tonality to every recording. This is probably a better definition of neutrality as it seems to not have any editorial tendancies.

The IQ3 is certainly not guilty of bringing a sameness to anything. It doesn't smooth over imperfections and if something is recorded somewhat "dry" it's going to sound dry on the IQ3. A great example of this is on the first "Z" album "Shampoo Horn" and the 2nd track "What went wrong in the real world?". There is very little added ambiance on the track and it's obviously close mic'ed in a dead sounding room. On the IQ3 the deadness is even more obvious than usual which one has to presume that given the recording gear available to the Zappa familly has to be intentional.

Staying with the same album and the track "Rubberband" For those unfamiliar with the album (now sadly deleted in it's original form) this is a track with Dweezil Zappa on fretless guitar and the unique style of Terry Bozzio on drums. Not everyone's cup of tea but a unique piece of music nevertheless. This was also recorded in the same studio but this time the signature "splashy" sound Bozzio favours on cymbals is clearly heard along with the obvious pitching he favours when tuning his drums. There's no dulling of the sound and the top end is fast and accurate, the aforementioned drums having pitch and ring clearly audible despite being run through a flanger.

I've spoken so far about detail which may make you think this cartridge is a bit tinny sounding. If you're used to the level of detail off a basic DJ cartridge you will possibly think this is the case but stick with things. Just for fun I dug out Metallica's "Enter Sandman" off the black album. The album is probably the best sounding Metallica album and the IQ3 showed great drive producing big drum sounds and deep bass (these I often find lacking on this album) but preserving the articulation on the guitars and not adding any artificial fat (phat?) to the low end.

I think we definitely have a contender (and possibly a winner) here for the "best MM" crown. Yes, you may think that 680GBP is pricey for an MM. Which maybe I'd agree with when looking at the traditional wisdom of buying MCs from maybe 400GBP. But, and here's the important bit. The IQ3 will show a clean pair of heels to other MMs and I'd expect it to do the same to a lot of MCs at and above this price without the necessity to buy an expensive MC compatible phono stage. It is a distinct step up from the 2M Black I reviewed earlier this year and I would say from memory that it has my beloved Reson Reca beat as well. As they're two cartridges I regard highly I have to say the IQ3 is well worth an audition. Leave your prejudices about MMs at home and prepare to be surprised.